Accessibility links
You Love Pinterest. Find Out Why The Police Do, Too : All Tech Considered Cops worldwide are getting savvy about social media, branching out beyond Facebook to solve everything from murder cases to thefts.

You Love Pinterest. Find Out Why The Police Do, Too

You Love Pinterest. Find Out Why The Police Do, Too 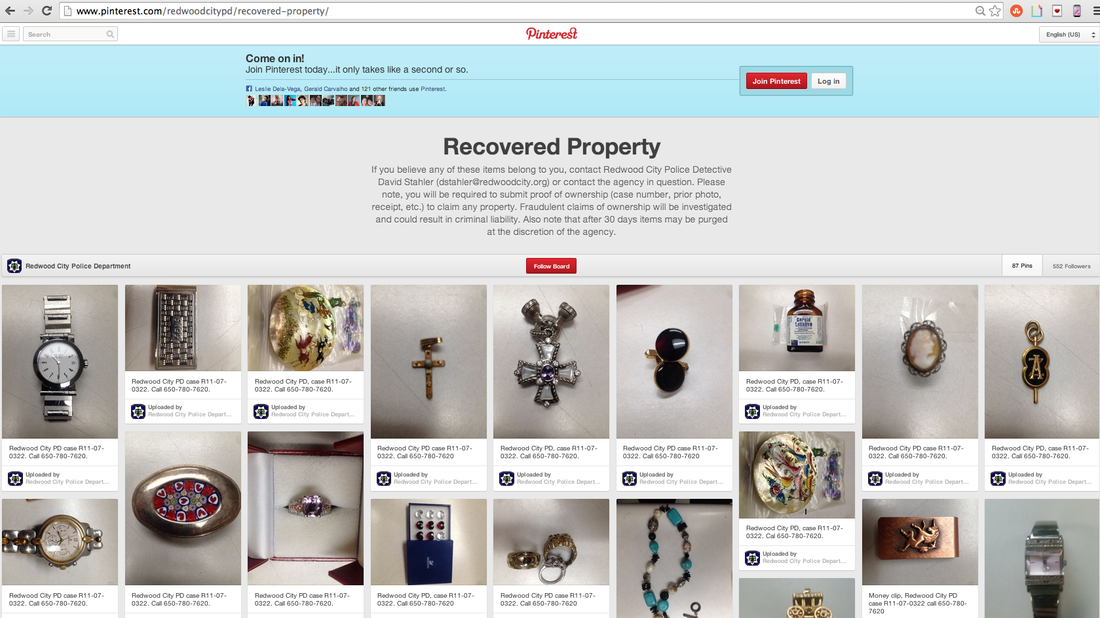 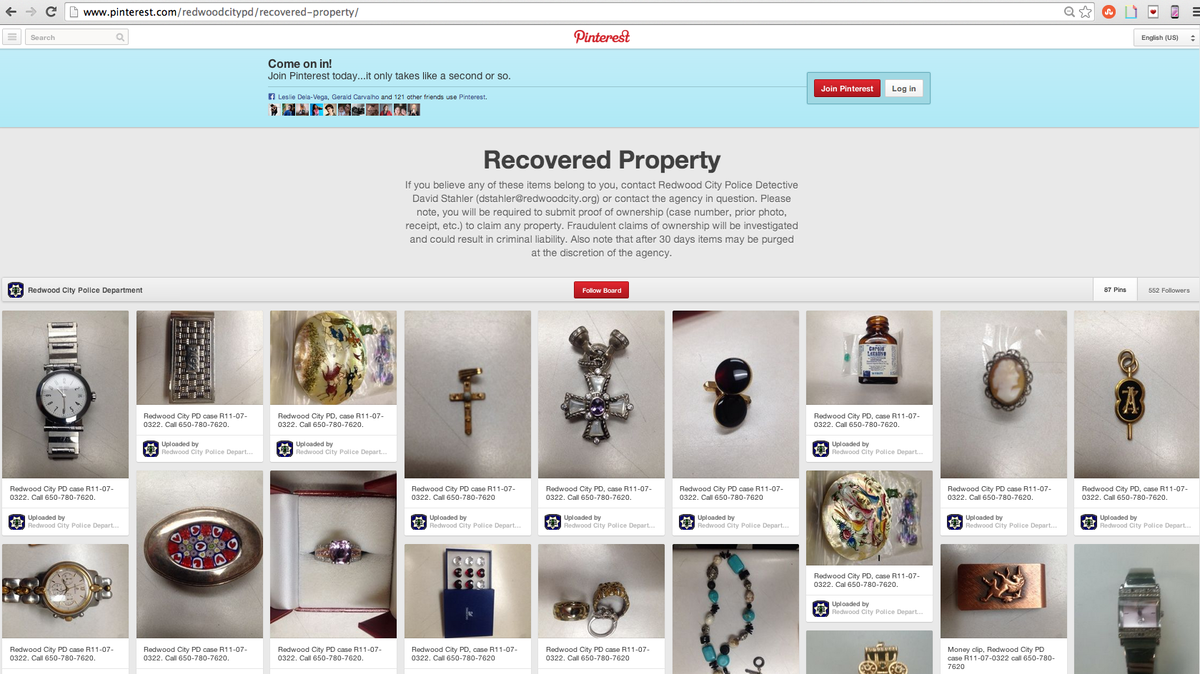 Plenty of people use Pinterest to find things — purses, posh hotels, eggplant parm recipes — but the rightful owner of a charm bracelet stolen 30 years ago? Leave that to the police.

In February, when an officer in Redwood City, Calif., discovered bags of stolen jewelry in the trunk of a car during a routine traffic stop, Detective Dave Stahler turned to social media — in hopes of tracking down the owner of a charm bracelet stamped with names and dates.

Eight hours after posting on his department's Facebook, Twitter — and the Pinterest page the agency launched in February — Stahler received information from not one but three people who helped identify the owner of the bracelet. That alone would be a good story — but when you learn that the jewelry was actually a mother's keepsake engraved with the names and birth dates of her children and stolen during a residential burglary in 1983, well, it's sweeter than all the red velvet cupcake recipes on Pinterest combined.

This is the fourth person in the area to be reunited with their property via Pinterest, according to an alert praising the "instrumental" role social media now play in the Redwood City Police Department, posted on Nixle, an online platform that connects the public with local government and law enforcement agencies.

It's a case of social media savvy that stands out at a time when the use of digital tools to solve crimes and connect cops with their communities — though growing quickly — still varies widely. The International Association of Chiefs of Police Center for Social Media found that 92 percent of U.S. law enforcement agencies use Facebook — but adoption of other platforms not so much. Apparently, more report using MySpace (um, what?) than Pinterest or Instagram, according to the study conducted last fall.

And while cops using social media to communicate is not new, there are signs that the practice is becoming more common, experimental — and effective. Exactly how effective is, for now, difficult to say. While far fewer police use Pinterest to solve crimes compared with Facebook or Twitter, and comprehensive statistics on its use for this purpose are scarce, law enforcement agencies around the country have reported successfully using it in the past year.

A quick search on Pinterest shows about 85 boards from police departments around the country — including Kansas City, Mo., police — who have used Pinterest to help solve burglary and robbery cases, locate missing people and educate parents about street drugs their kids may be using.

Expanding beyond Facebook and Twitter makes sense, especially when you consider that Pinterest's user base is cited as 80 percent female — and made up of people more used to getting their news in a digital landscape than, say, on the evening news.

"It's a way for us to reach people who wouldn't have gotten our messages before, people who maybe don't interact with traditional media," Kansas City police spokesperson Sarah Boyd has said.

Other examples include police in Richmond, Va., who use Pinterest to help in unsolved murder cases; and Pottstown, Pa., has reportedly seen a 57 percent increase in arrest rates for offenses such as theft, fraud and sexual assault after a local newspaper launched a Pinterest board featuring criminals' mug shots.

Still, while some agencies have fully embraced social media, others have not.

"It's really all over the map still," says Connected Cops' Lauri Stevens, an expert on the use of social media in law enforcement and the founder of a conference, consulting firm and news site on the subject. "There are a great many of them that are just coming along."

Some are still just getting started, but there are signs that more and more police worldwide are using social media platforms for far greater good than, uh, you or I.

And it's not just Pinterest — YouTube, too. With the Missing Person Pre-Roll project, the Australian Federal Police teamed up with YouTube to turn the annoying, unavoidable "pre-roll" (shown before the video you actually want to see) into the first scrolling missing-persons campaign. It reached 1.2 million people, resulted in 238 viewers clicking "Yes, I have," and won an activism award at this year's South by Southwest Interactive. Beats the old 1980s back of the milk carton.

Increasingly, cops are reaching out to communities in cool, new, transparent ways. In Toronto, law enforcement officials live-stream their news conferences and post them online with the help of Google Hangouts on Air and YouTube. From Georgia to Pennsylvania, police are hosting "tweet-alongs" that allow citizens to follow them on the job via their Twitter accounts. And this June, says Stevens, the third 24-hour Global Police Tweet-a-Thon aims to top the 31,000 tweets and 19 million people reached during its last event, in November.

It's an effort to bring awareness to law enforcement's increasing presence on social media platforms. Sure, citizens have been able to connect with their local law enforcement agencies on Facebook — but there's still a long way to go.

Social media is good for citizen safety, community-cop bonding and cracking cold cases, yes. But it's also good for police, who stand to benefit from becoming just as good at using these sites as the people they're sworn to protect. Not only can a greater use and understanding of social media platforms help police reach people in new ways — but experts like Stevens say social media proficiency among cops is needed to keep law enforcement on equal footing with law breakers.

"It's really important that these professionals learn how ... to use the ease of access to information to their own benefit also, or they're going to get run over," says Connected Cops' Stevens. A legit argument that pinning can make the world a better place? Like.