Accessibility links
A Foldable Bike Helmet You'll Just Happen To Have In Your Bag : All Tech Considered This week's featured innovation is a full-size helmet that collapses in half for easy stowage between rides — something urban bike-share cyclists might find especially appealing. 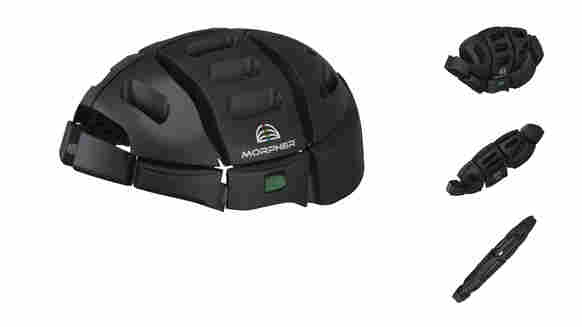 The Morpher folds in half from a full-size bike helmet so that it can be stashed away in a laptop or shoulder bag -- something urban bike-share cyclists might find especially appealing. Courtesy of Morpher hide caption 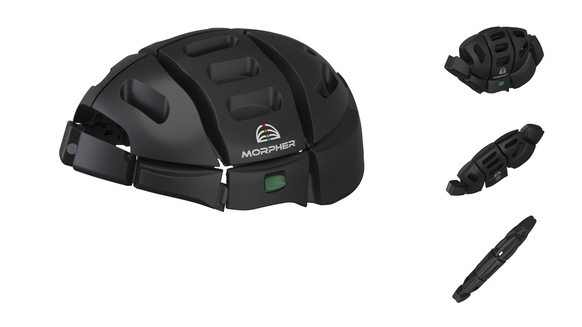 The Morpher folds in half from a full-size bike helmet so that it can be stashed away in a laptop or shoulder bag -- something urban bike-share cyclists might find especially appealing.

In our "Weekly Innovation" blog series, we explore an interesting idea, design or product that you may not have heard of yet. Do you have an innovation to share? Submit with this form.

This is a bike helmet made for people who think bike helmets are a pain to carry around.

English inventor Jeff Woolf came up with the idea of the first fold-flat bike helmet after noticing that many cyclists using European bike shares were going helmetless. He discovered that most who shunned helmets did so because they said they were too bulky to be conveniently stowed between rides. 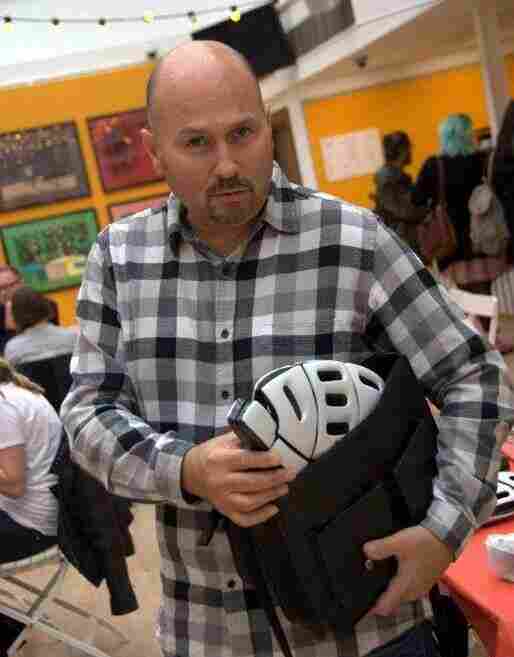 Certain a helmet had helped protect his head in a bike crash, Woolf wondered if there was a way to inspire more helmet wearing. "If I could invent a helmet that could fold flat, then I might save lives," Woolf said in an Indiegogo campaign for the helmet, called Morpher.

Woolf got nearly double his crowdfunding goal of $35,000 last year, and since then he's been trying to perfect a thin, light, safe model. His current design folds to the size of a textbook and is 1.4 inches thick — small enough to tuck away in a laptop bag or stack in a vending machine near bike shares.

Before it can be sold in the U.S., it must meet safety standards set by the Consumer Products Safety Commission. Those tests measure the G-force of a helmet-covered fake head dropped onto anvils.

"The factory is building it to pass U.S. testing standards, but whilst we are in the preproduction stage, we can't have official testing," Woolf says in an e-mail. "The factory makes millions of helmets for the U.S. market each year and has the largest in-house helmet testing facility in the world, so they know the standards that they are going to need to meet."

The standards have tripped up other helmet makers who have been working on more portable models. European models — including the foldable Pango and a model from Carrera that collapses like an accordion for storage — are not certified to the U.S. standard. There's even a Swedish-designed version worn as a neck collar until sensors detect a crash, at which point a head-covering air bag is deployed. It might appeal to those who eschew helmets because of hat hair, but it, too, doesn't meet U.S. safety requirements.

Another collapsible helmet called Closca has passed American safety standards, but casual urban bike-share users may find it too bulky to keep in a bag for their next unplanned ride.

Woolf expects Morpher will pass federal testing standards and be on sale in the U.S. early next year for about $110.