Accessibility links
As Drones Fly In Cities And Yards, So Do The Complaints : All Tech Considered As the price of drones drops, more people are playing around with them in their cities and neighborhoods. This doesn't sit well with a lot of Americans. Are they just paranoid? 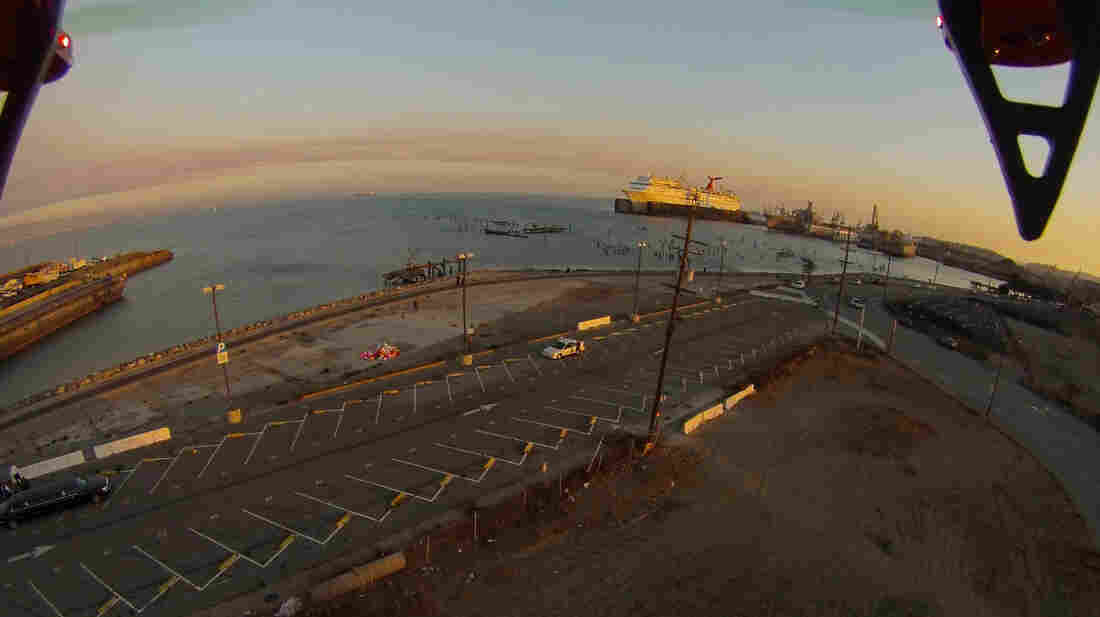 David Merrill attaches a camera to his drone to take photos of scenes like this one of Mission Bay, Calif. Courtesy of David Merrill hide caption 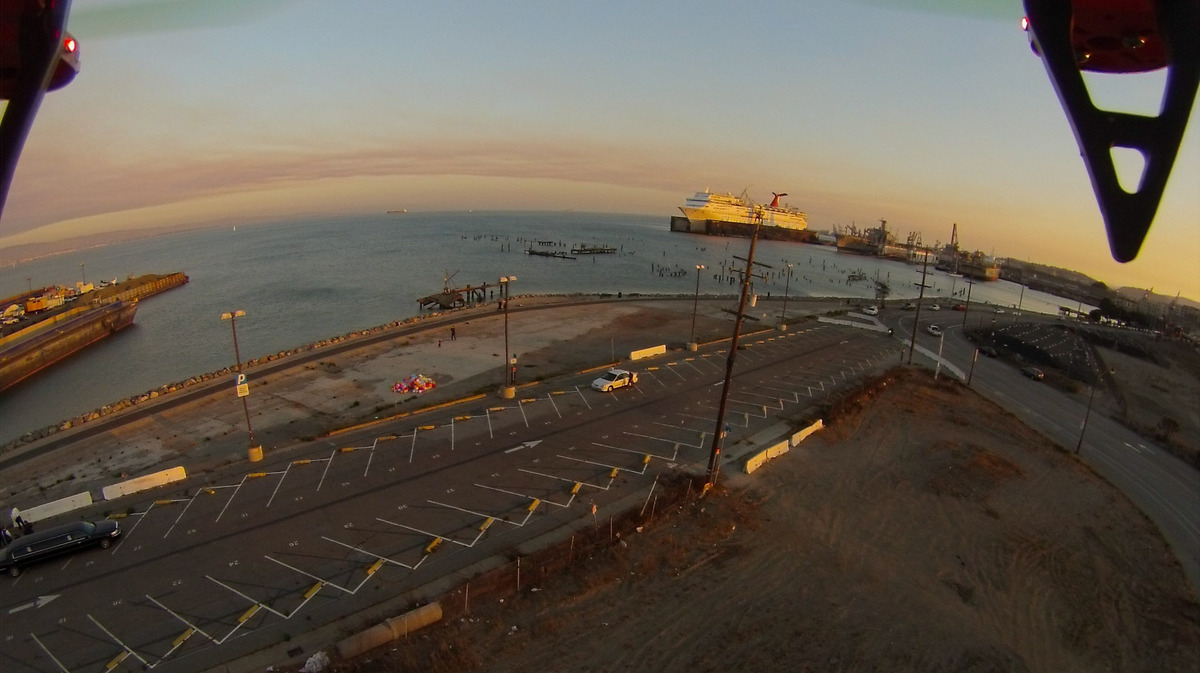 David Merrill attaches a camera to his drone to take photos of scenes like this one of Mission Bay, Calif.

The price of drones is dropping — a decent one could cost you $300 — but the reality of the devices flying around cities and neighborhoods doesn't sit well with a lot of Americans.

Are they just paranoid?

Three months ago, when Michael Kirschner and his wife purchased a new condo in San Francisco, they were not concerned about drones. They fell in love with the unit because of its big picture windows.

"You have a view that reaches all the way out to the Golden Gate Bridge," Kirschner says.

Then one day Kirschner's wife was sitting in the living room and saw a drone with a camera hovering outside those beautiful windows.

"She started hiding behind furniture because something's looking in at you ... and you're very self-conscious about that all of a sudden," Kirschner says. "I found myself doing the same thing. You're hiding behind your own furniture in your own house where you just had privacy prior."

Kirschner shows me a video of the drone hovering outside. It's a bit small in the video, but it's very loud.

A Drone Outside The Window

"It's like a bee. Zzzz. Flying out there," Kirschner says, sounding exasperated.

In a Pew Research Center poll, 63 percent of respondents said using drones for personal and commercial purposes would be a change for the worse.

One of the reasons often cited, says Aaron Smith, who conducted the poll, is privacy.

"This is a device that can look in my windows, look in my backyard, take pictures or videos of me and my family," Smith says. "You're not paranoid if they are, in fact, flying over your backyard and taking pictures of you at your barbecue."

The San Francisco Police Department hasn't had any complaints about drones, and Kirschner says he did not report the incident to police.

He did watch the drone land on his neighbor's porch, though, but decided not to confront the neighbor.

"Inevitably, you go down the path of, if it comes again, how are we going to get it out of the sky?" Kirschner says. "Can we throw things at it? Can we shoot water at it? The best idea I came up with was to buy some kind of remote control device and ram into it."

In terms of law, this is all uncharted territory. Local police say there are no laws directly applicable to drones, and it isn't clear if California's peeping Tom laws would apply. 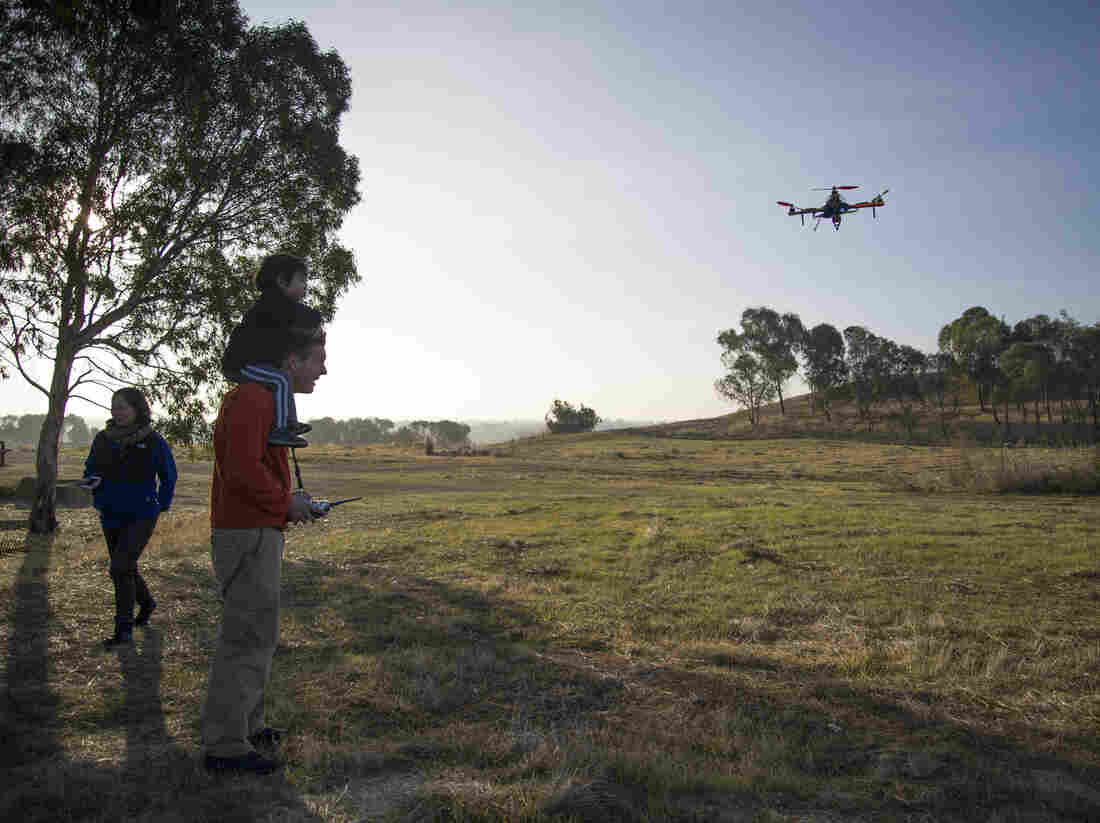 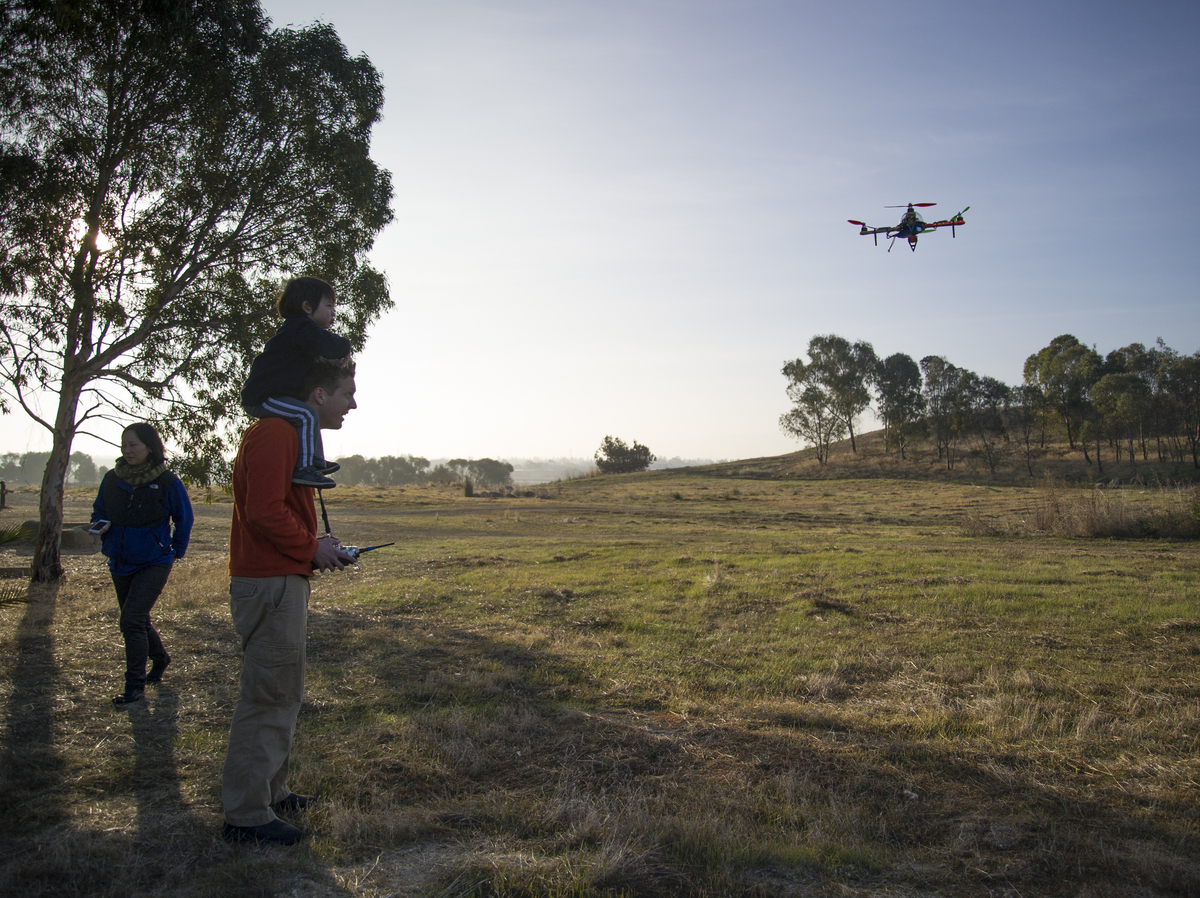 David Merrill and his son play with one of his drones in a park.

This is San Francisco, though, a city filled with tech startups and engineers who enjoy tinkering with the latest technology; there are plenty of people who own drones. David Merrill, the CEO of a local startup, owns several.

Merrill shows me one that looks like a four-leaf clover with a dome on top. It's about the width of a beach ball. He points to a spot near the center. "This is where I can stick a camera," he says.

Merrill isn't out to spy on anyone. He's an amateur photographer who always wanted to take aerial shots of beaches, mountains and cityscapes.

"It used to be basically impossible to do that as a hobbyist," Merrill says. "Now for $500 to [$1,000], you can be totally up and running with a rig that'll get beautiful aerial photographs." 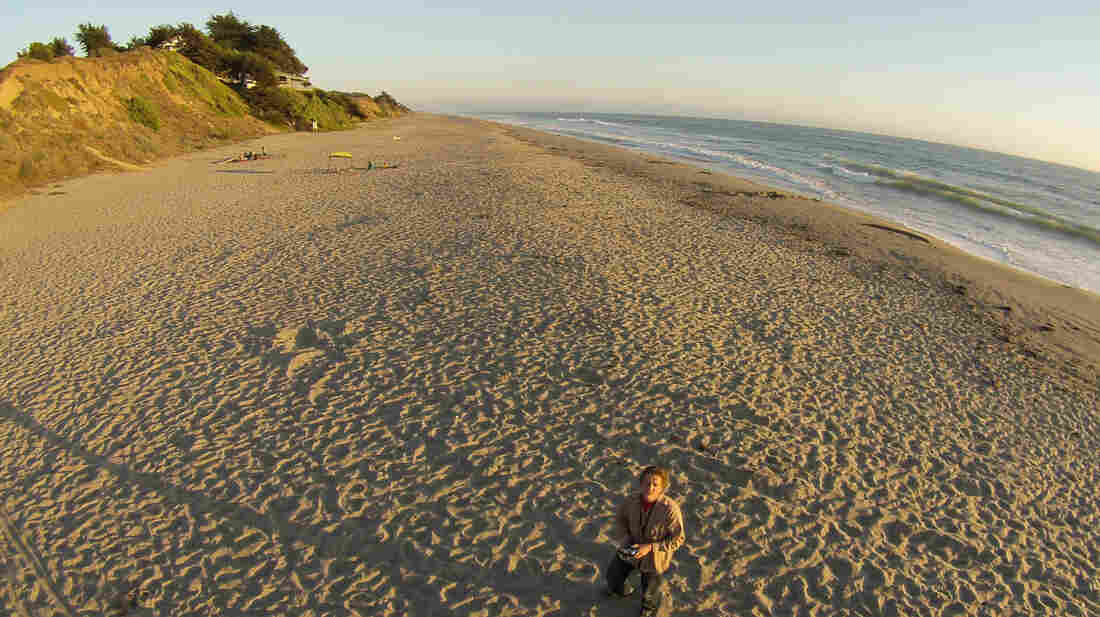 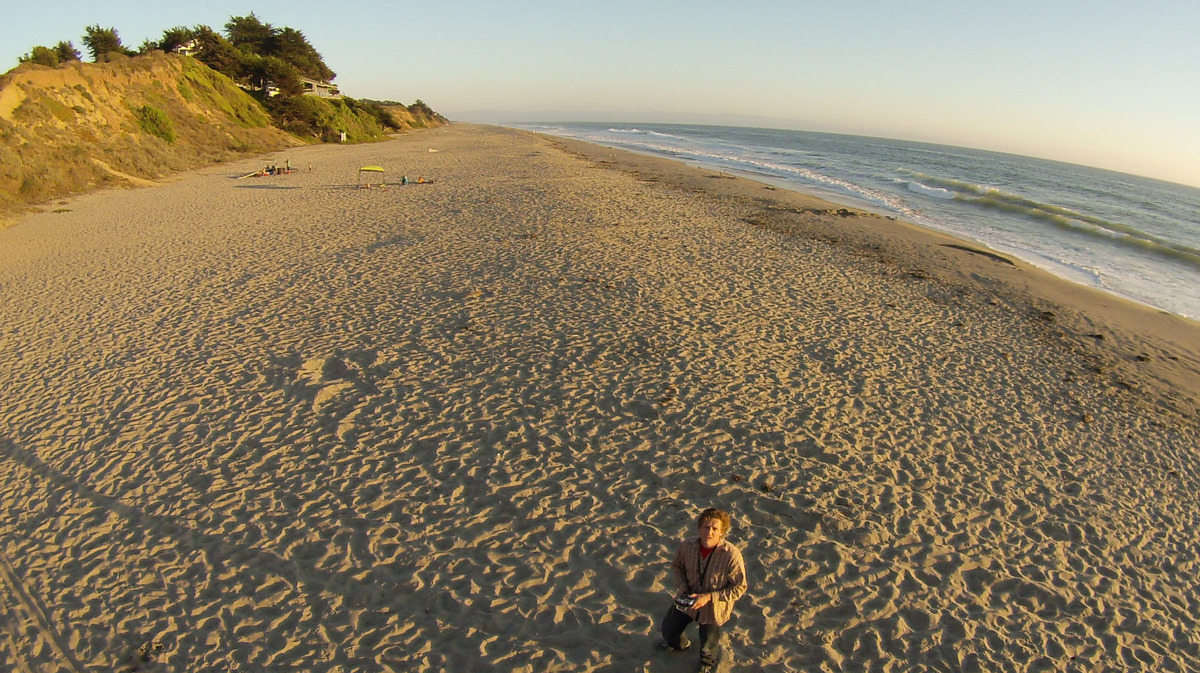 However, a lot of the public, even here at the center of the tech revolution, is more skeptical. I visited a local strip mall and asked shoppers what they thought of having more commercial and personal drones. The responses were overwhelmingly negative. The issue of privacy came up immediately. One woman specifically cited worries about drones looking through windows.

"It's too much of big brother watching us as it is," says shopper Erica Wright.

Janel Hollands says it's yet another way technology is being used to snoop on us. "It's similar to what's happening in every kind of arena. ... It's too much."

Joseph Yearby was ready to take action. "I'd do like them farmers out there in the Midwest — shoot 'em down."

Despite the reservations expressed by many of the people who spoke to NPR, they also seemed resolved to the fact that drones are coming. They'd just like to see it happen more slowly and for there to be clear rules about when and where people can use drones.