Accessibility links
A New Kind Of Sports Star: Gamers Make It To The Next Level : All Tech Considered E-sports tournaments and competitive online gaming events are more popular than ever. One event's prize pool hit $5 million last week, but what does it take to win? 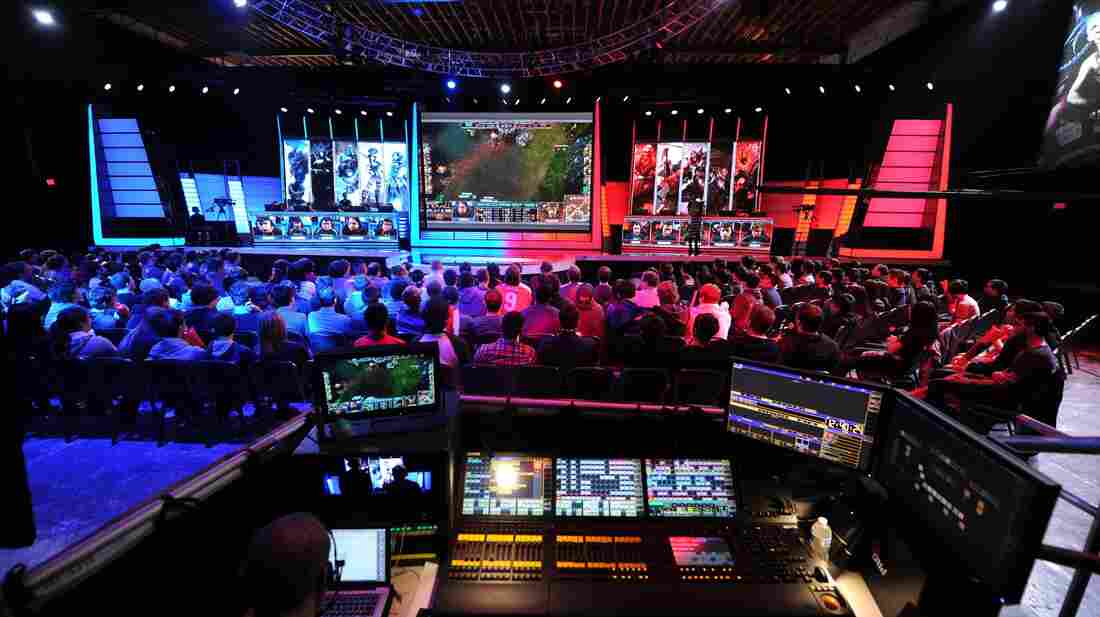 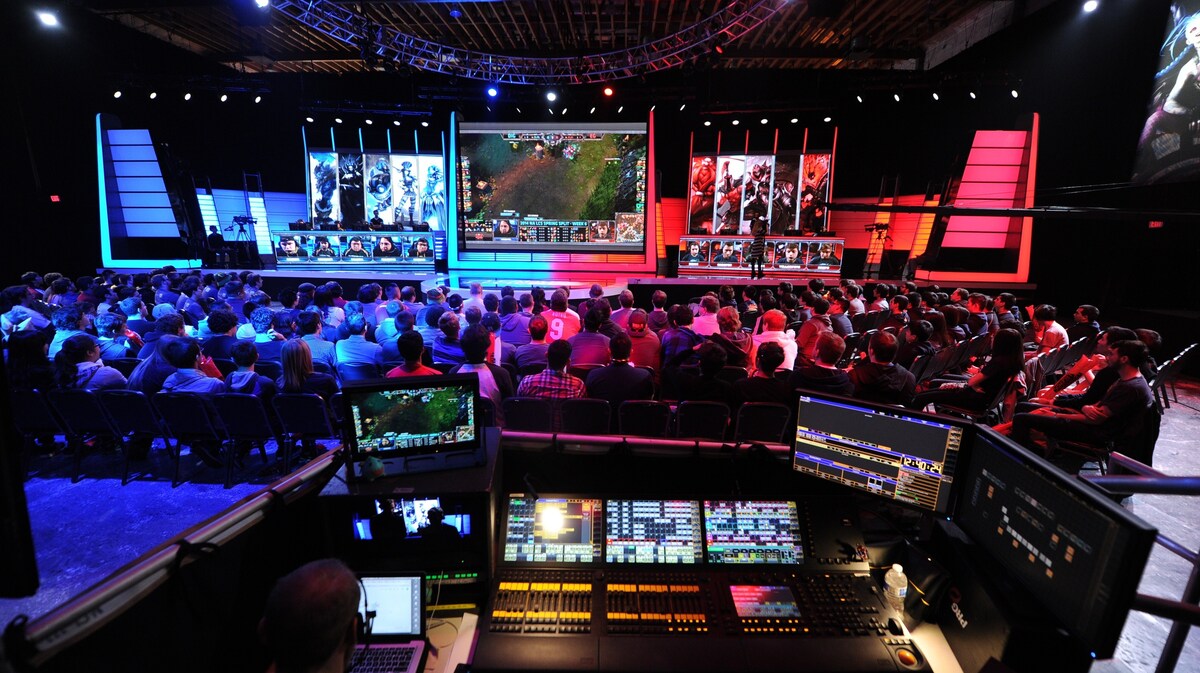 The studio audience watches a match between professional teams Dignitas (left) and Evil Geniuses (right) during the League of Legends North American Championship Series on Feb. 22.

The world of competitive online gaming hit a milestone last week when the prize pool for The International — a tournament for the game Dota 2 — reached more than $5 million, the largest in the history of e-sports.

The players that compete in these top-tier events for massive payouts are the elites, professional gamers. Some even receive "athlete visas" to play in the U.S. Like the kid with NBA dreams shooting hoops in his backyard, many average gamers aspire to reach that pro-level status.

"Only a select few are going to make it, and you have to be the absolute top of the heap," filmmaker Mary Ratliff says. "And you're only going to stay there for a very short period of time."

This video is a reel of highlights to give you an understanding of what a pro tournament for a game like StarCraft II is like.

Professional gaming can be grueling and difficult, and Ratliff says it's a lot more work than some people realize. Many of these players have the same level of dedication and passion as players of the NBA or the NFL, training for 10 hours a day at times.

One former pro player would go to school all day, work a part-time job, and then, Ratliff says, he would go home and practice Starcraft II all night, because he wanted to be one of the top players.

"It was a drive," Ratliff says. "And you have to have that if you want to make it in this world."

That drive pays off for players who are picked up by teams like Evil Geniuses. The team supports players with salaries, gives them a place to train and puts them in a position to compete for those big prizes. Though not quite as lucrative — yet — sponsorship deals from companies like Monster energy drinks and Razer also sweeten the pot.

In South Korea, where professional gaming has reached celebrity status, players also have managers and PR people to help them navigate this business side of things. That kind of management is just beginning to gain traction for e-sports players in the U.S., Ratliff says.

"The world of e-sports actually exists completely within the confines of things we understand ... [like] capitalism and business," she says. "Once you start to really break it down into what this is, it's not anything new at its heart. It's something that has existed for a long time; we're just doing it with something new." 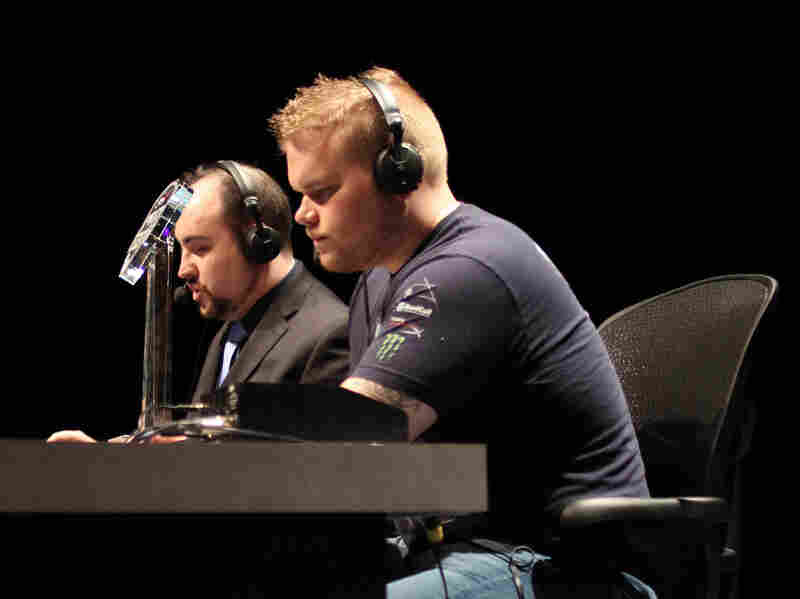 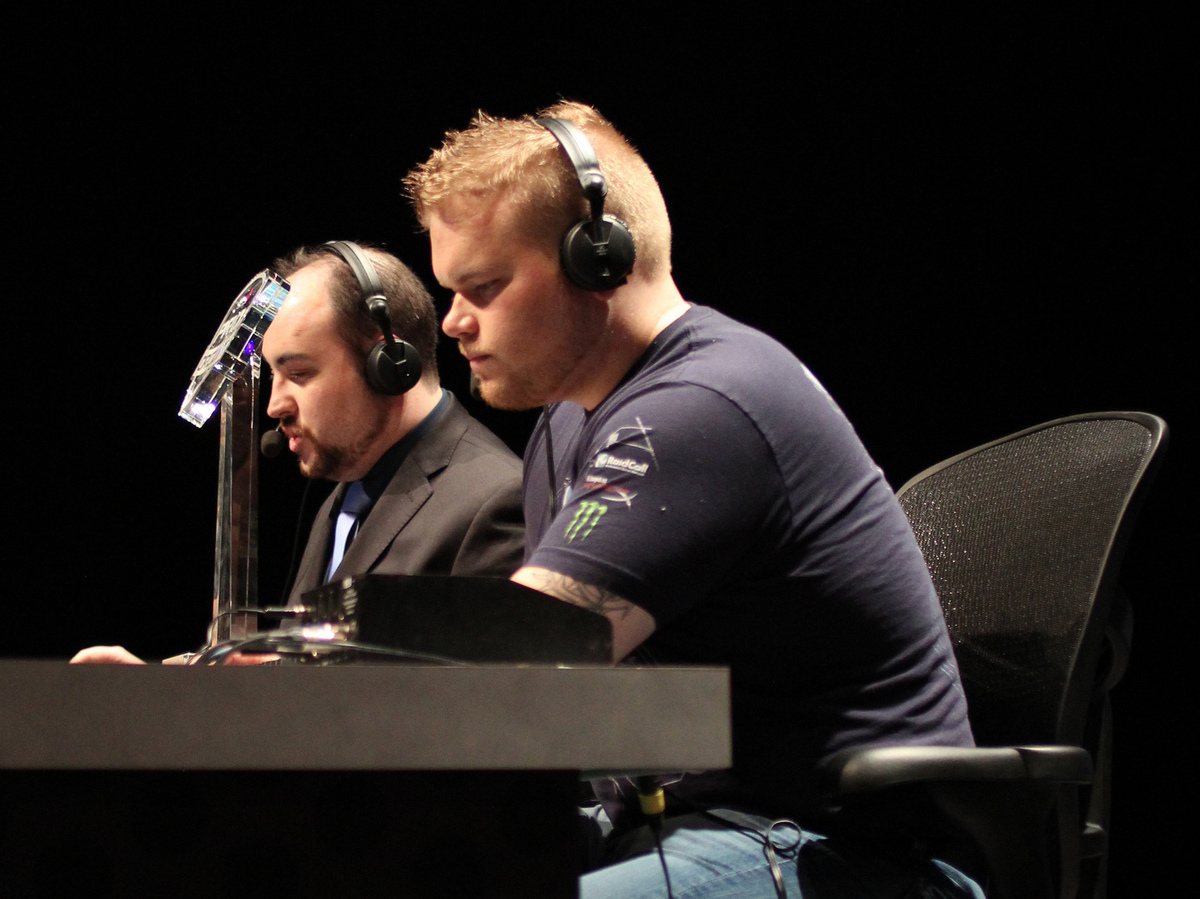 The real difference between e-sports and traditional sports is the actual activity at the heart of the competition.

Geoff "iNcontrol" Robinson, a team captain of Evil Geniuses featured in Ratliff's film, is one of those elite pro players. His love of StarCraft began with the first game in 1998. He went on to win the World Cyber Games in 2007, and was then picked up by Evil Geniuses.

The barrel-chested Robinson looks like he would be equally at home in the sport of football, which he played when he was in high school. It's that spirit of competitiveness and camaraderie that drew him to the game and e-sports. But it's not just about winning prize money, he says.

"E-sports, for me, has traveled me around the world, it's taught me about many different cultures that I would never have encountered otherwise ... [and] introduced me to people in business and entertainment," Robinson says.

That's another parallel between e-sports and traditional sports. Two players might not speak the same language, but if they both understand a competitive game, be it soccer or StarCraft II, a connection can be made.

Now 28 years old, Robinson calls himself a "wizened old figure" within the community, which tends to skew in the late teens and early 20s. He's become a mentor for other players, a natural fit for a guy that went to college to become a teacher. He's also become a commentator and major personality within the community.

"It fulfills all that I would want to be doing with my life," Robinson says. "With e-sports ... I get to teach people, I get to lead people, I get to speak in front of large audiences and entertain that way, but I also get to compete."

As e-sports and competitive online gaming continues to gain popularity, Robinson says, he would love to see people give it a chance before casting it aside as "something people do in lieu of being productive."

"If this vehicle for so much meaning and pleasure in my life could be made available and more accessible for more people, and I could be a part of that movement, then that's where I would want it to go," he says. "I just want it to be recognized as a power for good and change."