Accessibility links
Girlfriend 'Complains A Lot ... Interrupts,' Developer Tells Conference : All Tech Considered At a tech conference in Berlin, a developer compared a software plug-in framework to his girlfriend, saying she "complains a lot," "interrupts" and "doesn't play well with my other friends." 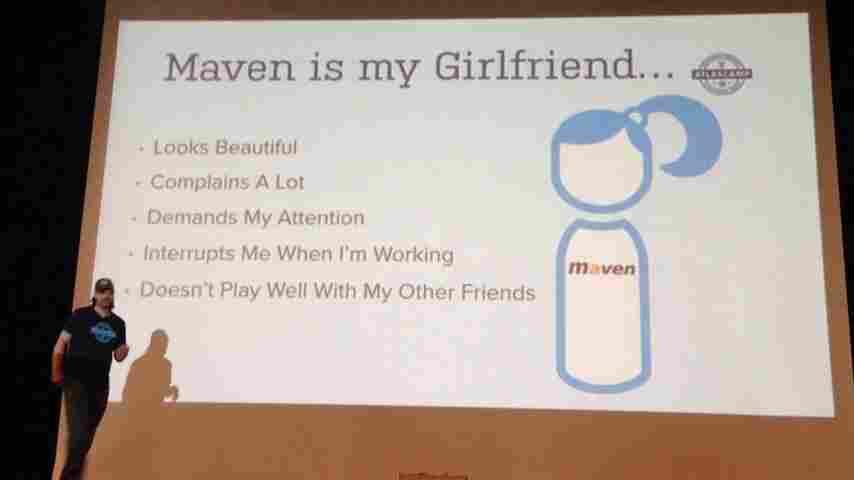 A slide from a presentation at a tech conference in Berlin. Courtesy of Markos Saha hide caption 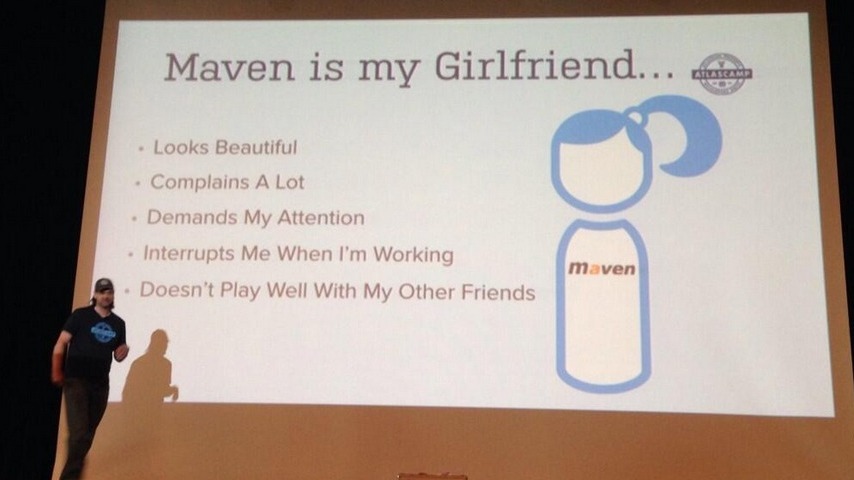 A slide from a presentation at a tech conference in Berlin.

The consequences of a dearth of women in technology are showing up again, this time in a show of sexism at a tech conference in Berlin. (See update at end of post.)

Atlassian, the company behind software products Jira, Confluence, HipChat and more, is holding its #AtlasCamp for developers, and a developer there took the stage to present. Business Insider details what went down:

"[Jonathan] Doklovic was making a presentation called, 'A P2 Plugin and a SaaS Platform Walk into a Bar ...' In the presentation, he threw up a slide about Maven, a plugin execution framework supported by Atlassian that developers can use to add software components to their existing applications.

"In the slide, Doklovic compared Maven to his girlfriend, saying that although she looks beautiful she 'complains a lot, demands my attention, interrupts me when I'm working' and 'doesn't play well with my other friends.' "

While the attendee who put up the photo, Marko Saha, says, "People attending locally #AtlasCamp seemed not to be offended," his photo of the slide was posted on Twitter. That stirred up the latest tempest of disgust on both sides of the Atlantic Ocean.

For its part, Atlassian's official Twitter account called the slide "BS" and said, "We're taking immediate action." It's not clear what that is.

Atlassian, the company behind the AtlasCamp and the employer of the developer who put up the controversial slide, has put up a lengthy blog post apologizing for the incident on stage. An excerpt:

"We are sorry for having allowed this offensive slide into an AtlasCamp presentation. The content does not reflect our company values – nor our personal values as co-founders and individuals. Quite simply, it's not OK.

Sexism is a difficult issue for the tech industry, and today we didn't make it any better.

We are going through all the events that allowed this slide to reach the public. We've already started immediate action. Where our organisation and process were lacking, we will add oversight. Where our culture is at fault, we will change that culture."

Our original headline quoted the developer as saying women "complain a lot, interrupt." The developer, describing a software product, actually said the product was like his girlfriend, who he said "complains a lot" and "interrupts me when I'm working."