Accessibility links
Yo Is The Buzzy App Of The Moment, Whether Yo Like It Or Not : All Tech Considered Yo is an app that does nothing but let you send a voice message to your contacts saying "Yo." Is it worth the $1 million investors seem to think it is?

Yo Is The Buzzy App Of The Moment, Whether Yo Like It Or Not

Yo Is The Buzzy App Of The Moment, Whether Yo Like It Or Not 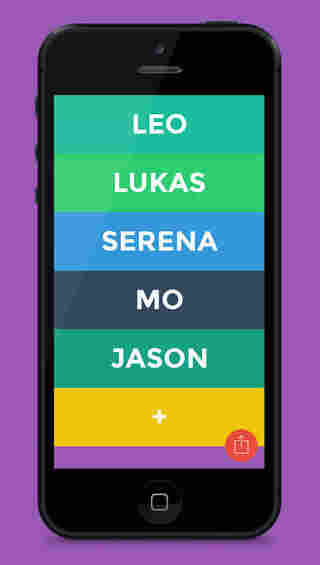 The description on the app store for Yo: "Yo is a single-tap zero character communication tool." Courtesy of Yo hide caption

toggle caption
Courtesy of Yo

Yo. The greeting you use when "hello" is too polysyllabic and "hey" is too many characters is now a messaging app worth $1 million, according to the investors who backed it. And as it enjoys its moment of fame (tech blogs writing about it earnestly, everyone else outraged by the absurdity), Yo has won over more than 200,000 users.

This is how the app works: You add your friends. You tap a friend's name. He receives the sound of a disembodied voice saying "Yo" with a banner showing that the message came from you.

You can choose to Yo back.

I sent out about a dozen Yo's (the total number of friends I could find who had downloaded the app on Wednesday) and, throughout the afternoon, evening and the next day, received random Yo's at different times. One Yo came while I was dozing off, a surprise electronic voice jumping out at me in the night, saying nothing but "Yo."

The origin story is as ridiculous as the existence and valuation of this app. Per The New York Times:

"The idea came from Mr. [Moshe] Hogeg, who asked Mr. [Or] Arbel a few months ago to create an app whose sole purpose would be to notify Mr. Hogeg's personal assistant when Mr. Hogeg wanted to see her in his office."

One of my girlfriends is already running through the implications. If this actually takes off, dating will be even weirder, she says. "HOW MANY SECONDS DO I WAIT BEFORE I SAY YO BACK!?!?"

If, like many, you fear that Yo is a sign of The Rapture, avoidance is a way to go. Maybe it will be a dud and just go away. But in the early days of Twitter, a platform that now seems overgenerous in letting us have 140 characters, plenty of naysayers thought it was ridiculous, too.

In 2009, Slate put out a mocking video, imagining a next-generation version of Twitter, which they called Flutter, that limited messages to 26 characters. Some of the language in the parody is eerily prescient:

"It just takes too long to compose a message with 140 characters ... that's like hundreds of characters people have to read."

"You hardly even have to think about what you're posting."

It's silly, yes. Startups with substantive goals are probably right to be aghast, especially if Yo's financial boost comes at their expense. But for the rest of us, it's kind of amusing, in a sixth-grade kind of way. Smarter humans among us are still coming up with complex formulas to solve economic problems and writing symphonies, for now. When the great poets and artists are reduced to Yo-ing back and forth, we'll need to re-evaluate. 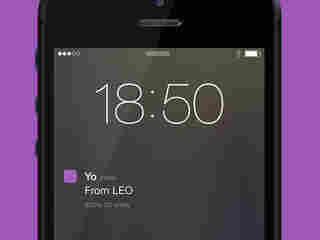 And if you want to look for some symmetry here, you could argue that human communication has come full circle. The earliest humans likely made simple sounds, like grunts, at one other before developing more complex speech. Now, after civilization has developed thousands of languages and invented paper and the printing press and the Internet, the big buzzy innovation is monosyllabic messaging.

To borrow from one of the many human languages to choose from, "C'est la vie."

Well, that didn't take long. Arbel confirms that his app has been hacked. TechCrunch reports that students at Georgia Tech claimed they were able to get Yo users' phone numbers, spam users and send notifications "with any text we want."