Accessibility links
Simmering Online Debate Shows Emoji Is In The Eye Of The Beholder : All Tech Considered A report from a local Philadelphia TV station is reigniting a debate and getting people all up in arms. (Or should we say, up in hands?) 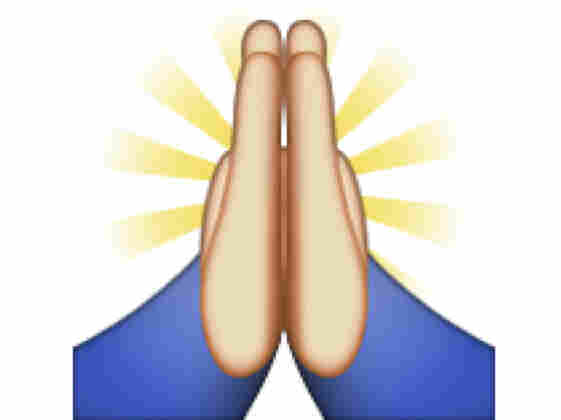 What is this emoji? NPR hide caption 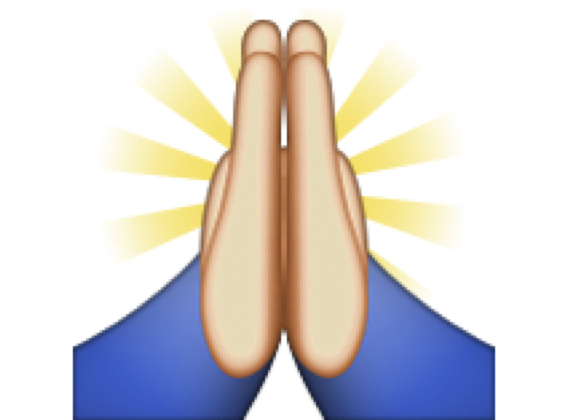 What is this emoji?

Images, GIFs and emojis — particularly the latter — have morphed into ways we express our feelings. They've quickly replaced words and sentences in our texts, tweets and emails.

So, what is this emoji? (As I'm writing this, it's consistently been the 25th most-tweeted emoji, according to the real-time emojitracker.) On Thursday, a report from a local Philadelphia TV station reignited a debate and got people all up in arms. (Or should I say, up in hands?)

And if you want to play by the book, turn the question to your iPhone: Highlight the emoji and prompt your iPhone to "Speak" it. It'll tell you that the emoji is "hands folded in prayer." And if you think of how folks usually high-five one another — using opposite hands, with thumbs crossed — this makes sense.

The Emojipedia doesn't choose one meaning but says it varies depending on the cultural context. In Japanese culture, it says, it can mean "sorry" or "thank you."

@ajs @kevinroose @jamesliamcook 🙏It is a person holding their hands together. Meaning of this differs culturally, which makes emoji fun 🎉

@katchow Maybe more acute angles on arms and thinner "rays" would make it look more like high 5/less like prayer, which is what I see.

@katchow if it is high-fiving, why are they wearing same-colored shirt? is that why they're high-fiving?

@katchow I speak Japanese and I've used it as "thank you" but also "please" as in, please do me a favor.

When we think about emojis and what they mean, we have to consider how these symbols have evolved into their own language. Emojis aren't quite a universal form of communication; their meanings are malleable and often develop in unique ways as we build relationships with the people we're texting or tweeting. I assign different meanings to the same emojis based on inside jokes with friends, moods and specific situations.

"There's also a certain subjective quality to the sequences. Depending on whether you think the little face with the teardrop on his forehead is sweating or crying, your friend may have either just been dumped or been to SoulCycle. 'I think it's clear that a rough grammar exists for emoji, or is at least emerging,' said Colin Rothfels, a developer who maintains a Twitter feed, @anagramatron, that collects tweets (and thus emoji) that are anagrams."

But if I had to choose one meaning for the hands-pressed-together emoji, I'd probably go with this one:

@totalvibration @katchow I always thought it was ref to that scene in movies where people put hands on opposites of glass to say goodbye.