Accessibility links
A Night At The Museum ... With Robots : All Tech Considered For five nights at London's Tate Britain museum, four robots are roving through the halls controlled by people around the world. 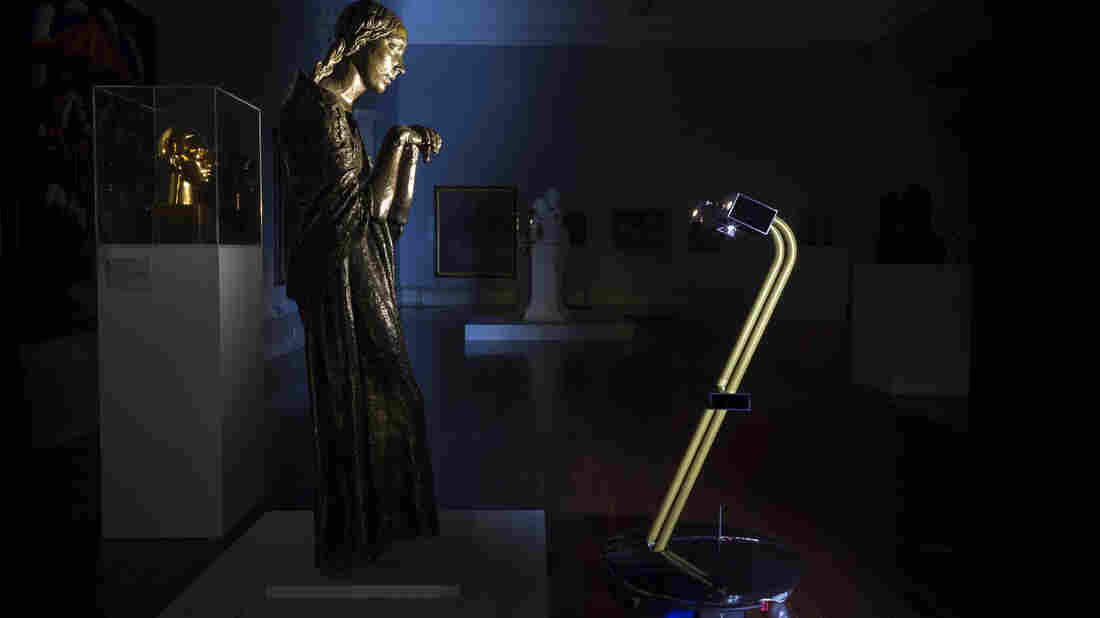 A robot, controlled from afar, moves in for a closer look. Alexey Moskvin/Tate Britain hide caption 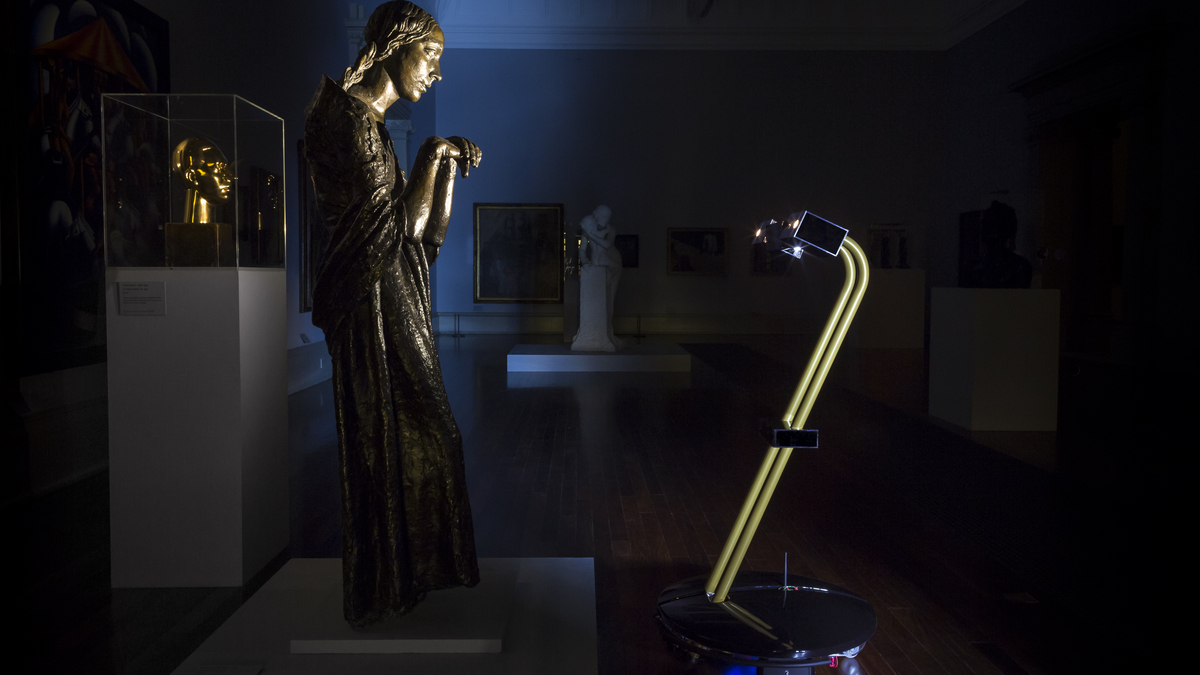 A robot, controlled from afar, moves in for a closer look.

There are four robots roaming around the Tate Britain museum in London. Since Wednesday night, they've been roving the halls after hours, streaming video to the world as part of the After Dark project.

As the robots move through the museum, their little lights illuminate hundreds of statues and paintings — works of historic and contemporary British art — spread over roughly 20 rooms.

If it's not cool enough to have robots making their way around a museum in the dark, there's another cool factor: Regular people all around the world are controlling their movements from their computers.

"[The robots] have controls navigating around the gallery. They can go forward, left, right, tilt the head up and down, look around," says David Di Duca, one of the project designers. He's with a digital design studio called The Workers. They received the Tate Britain's IK Prize, which awards a group that uses digital technology to bring the museum's collections to a wider audience.

"When someone's controlling the robot, they're effectively curating the feed or the experience for a much wider audience."

That means anyone, anywhere, with access to the Internet can be a curator. Every night since Wednesday, people have been able to visit the site and fill out a simple form for a chance to take the robots for a spin. What's more, the event also offers a chance to reach people who may never visit the museum. People from all over the world can log on for the robots and stay to explore 500 years of British art.

Art experts and gallery guides are working in shifts to provide commentary throughout the night.

One potential challenge, though: When you are sending robots into galleries at night and letting people remotely take the reigns, how do you make sure the precious artworks don't get ruined? Di Duca says there are a lot of precautions in place.

"The robots are designed with a wide lower base, and the outside edge of that is a kill switch, which takes out the power to the robots. Some artworks are directly on the floor, [so there's something for the robots to hit] in that worst-case scenario." 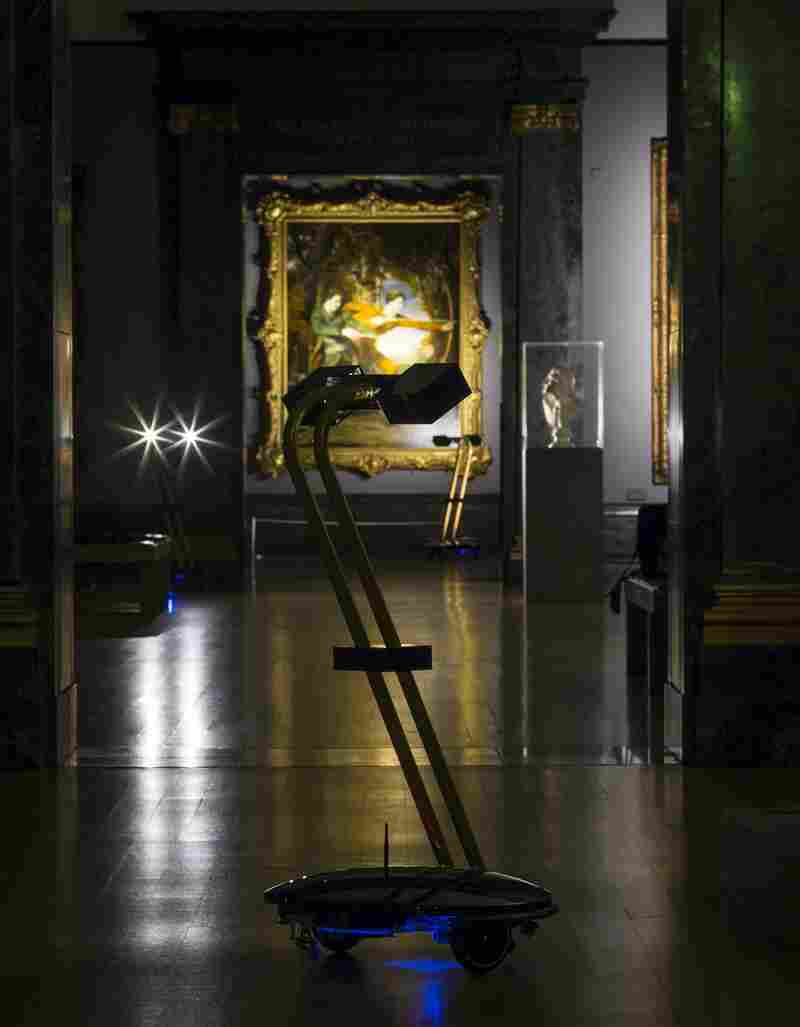 There are also humans behind the scenes if something goes wrong. Ross Cairns, one of the founders of The Workers, is also working on the project.

"We have a sort of HQ in the dungeons of the Tate where we're just making sure everything's running well, while upstairs in the gallery the robots are roaming free."

Di Duca says that generally things have been running smoothly. Some of the best moments are when two of the robots actually meet each other in the gallery.

"They sort of look at each other," he says. "And you have no idea who the two people controlling them are, and they're never gonna meet each other, but they're, for some split moment, staring at each other with these funny robot faces in a gallery in London."

If you want to see artwork, Di Duca still thinks the best way is to actually go to a museum. They're not trying to replace that experience.

"It's meant to be something else — some experience on its own right which allows you to see things in a way which hasn't been seen before."

There's still time. You can watch the live feed and maybe even get lucky enough to take control. You can still get involved here. The last tour will go until 3 a.m. GMT Monday.