Accessibility links
WATCH: The Robotic Baby Penguin That Spies For Scientists : All Tech Considered The emperor penguins of Antarctica are adorable. They're also pretty skittish when humans come around to collect data. Researchers at the University of Strasbourg have a solution: a penguin rover. 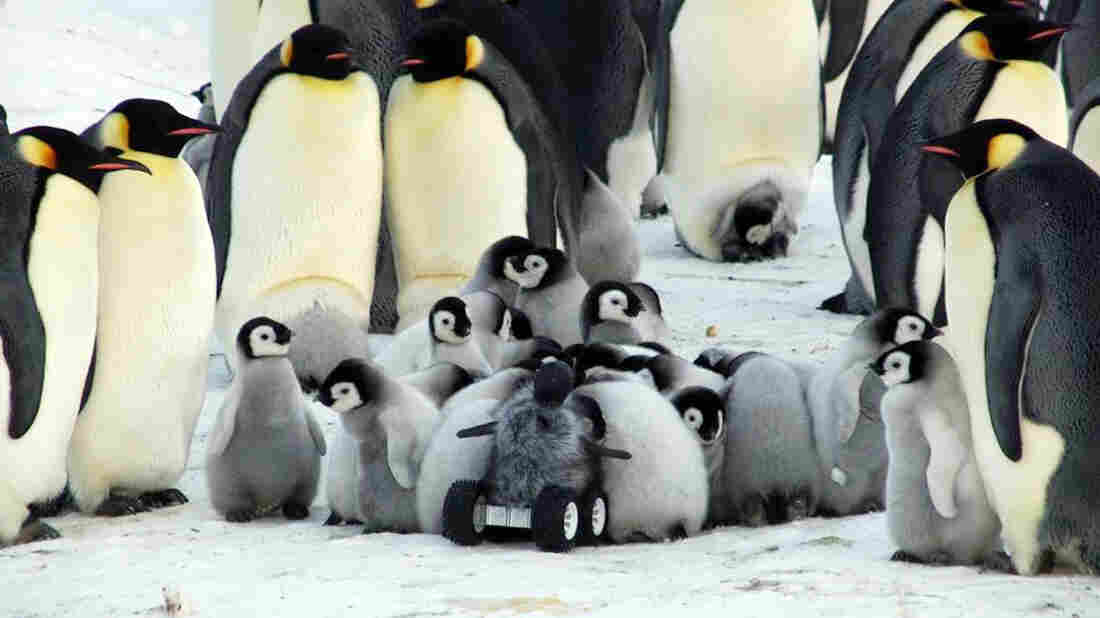 Even this early model, a little penguin rover with clearly visible wheels, was accepted into the huddle. Later models, like the one shown in the video below, had the tires concealed. Le Maho et al., Nature Methods hide caption 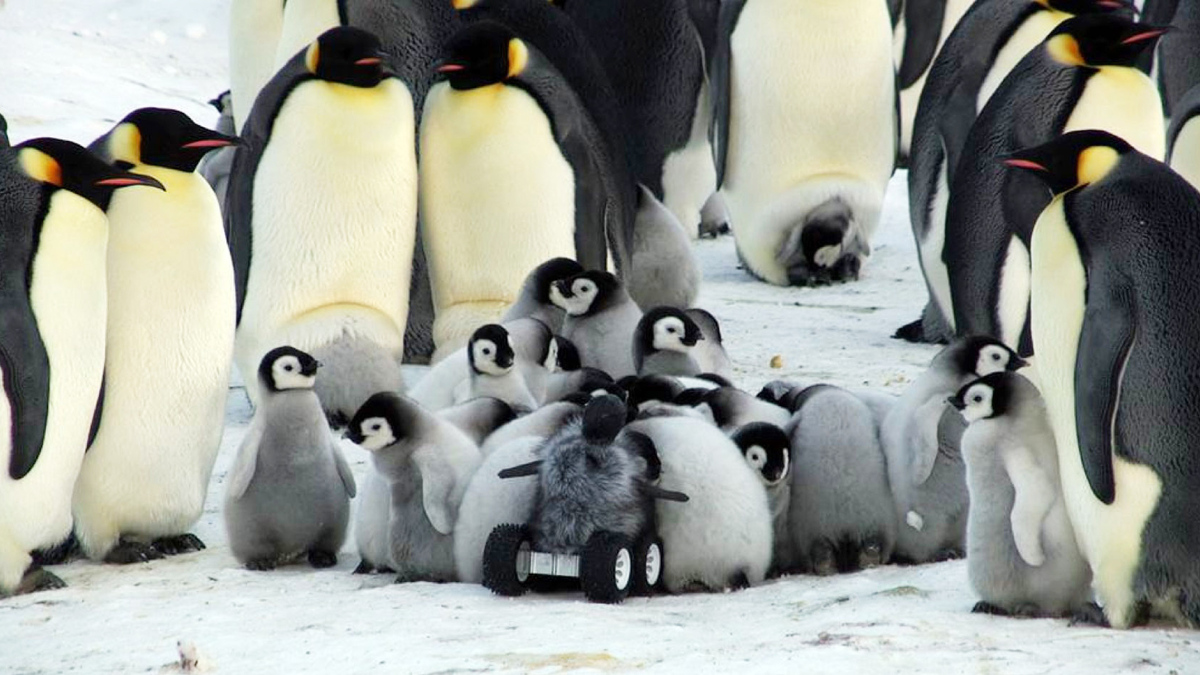 Even this early model, a little penguin rover with clearly visible wheels, was accepted into the huddle. Later models, like the one shown in the video below, had the tires concealed.

Emperor penguins are elegant and adorable. They're also quite shy and skittish around humans.

Many penguins tracked in Antarctica have data-collecting devices underneath their skin. Usually, researchers have to get close to them and use hand readers to pick up a signal from the devices — which freaks the penguins out.

Yvon Le Maho, who has been studying penguins for more than 40 years, decided to tackle that problem.

"I thought maybe we can use rovers," Le Maho says.

He got the idea to use a remote-controlled, wheeled device disguised as a penguin to infiltrate the colony about seven years ago. Turns out, it works. Le Maho and other scientists at the University of Strasbourg in France published a paper about their work with rovers in the journal Nature Methods last Sunday.

Le Maho and his team equipped some penguins with heart monitors and saw that when the rovers approached instead of humans, stress levels stayed low.

If you want to confuse the birds with fake penguins, it should be very, very well-designed.

"When a rover is approaching, the increase in heart rate is about the same that the bird has when another penguin is passing by," he says.

But the disguise has to be good.

"If you want to confuse the birds with fake penguins, it should be very, very well-designed," says Le Maho.

Le Maho first designed a fiberglass penguin, but the other penguins didn't buy it.To get in, the rover penguin had to really look the part.

Scientists and filmmakers joined forces to make that happen.

At the same time the Le Maho was experimenting, a U.K.-based production company was working on shooting a film using camouflaged cameras to get into penguin colonies.

"It was like a marriage in heaven," says Philip Dalton, producer of the BBC miniseries Penguins: Spy in the Huddle.

Dalton works for John Downer Productions, which specializes in designing spy cams to get unique shots in various environments. A team of engineers and model-makers worked to get the feathers, the coloring and the wheels just right. After a few model tweaks, they made a fluffy baby penguin that they call a "chick cam."

Happily, it was accepted into the colony.

"You get this wonderful perspective, which is very similar to what it must look like if you are a chick yourself," says Dalton.

With this special access, the chick cam got a shot of an emperor penguin laying an egg — a moment that hadn't been captured before.

That was TV gold, for sure, but the chick cam also produced some important science.

"I think in the year that we were there, with over 1,000 hours of footage that we gathered with our penguin cams, that was the equivalent of about, I believe, five years of research," Dalton says.

Le Maho and his team at the University of Strasbourg hope that this approach will allow scientists to better track penguins and understand their travel and mating patterns — without stressing the birds out.