Accessibility links
The Market For Low-End Smartphones Is Looking Up : All Tech Considered Smartphones that don't scrimp on performance but sell for less than $200 off contract are gaining traction. And the low end is quickly becoming one of the most innovative spaces in mobile tech. 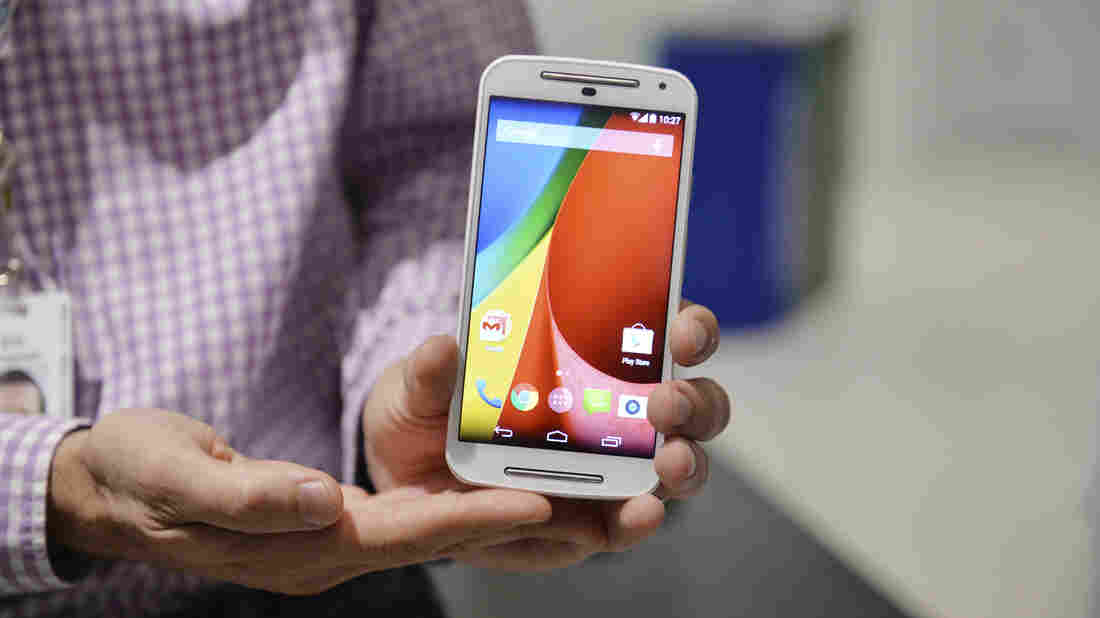 The Moto G became a success for Motorola and challenged what low-cost Android phones could be. Daniel Boczarski/Getty Images hide caption 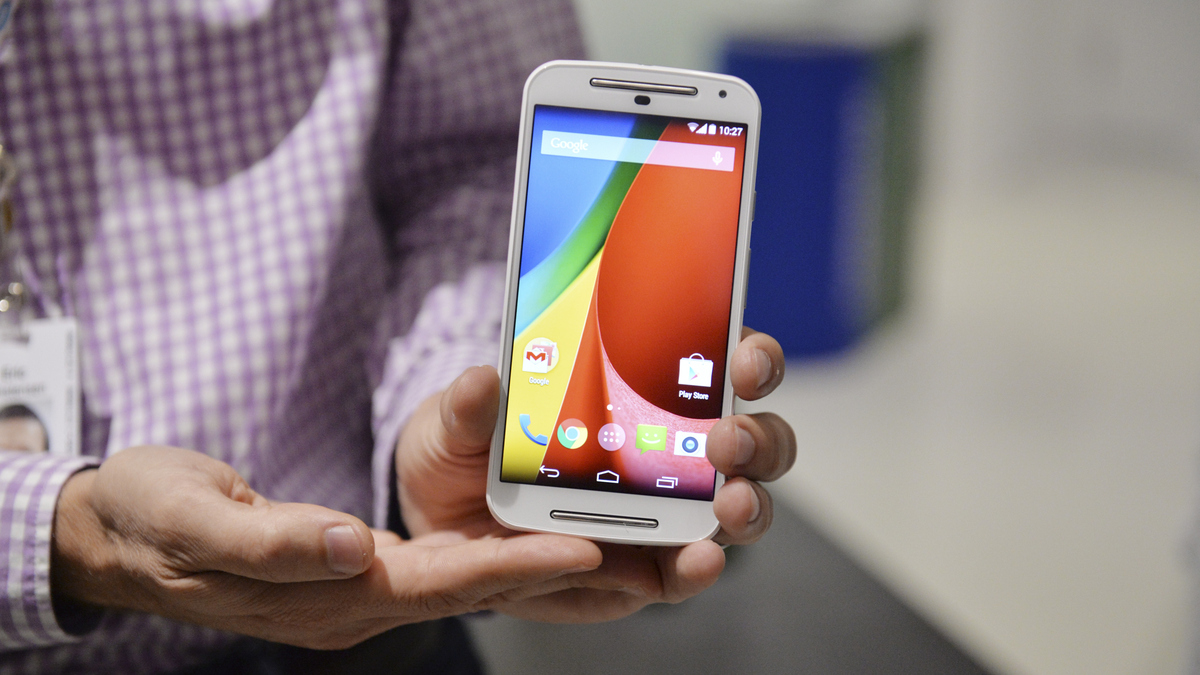 The Moto G became a success for Motorola and challenged what low-cost Android phones could be.

Around this time every year, retailers gird their loins and prepare to slash prices for the holiday shopping season. For many stores, Black Friday and Cyber Monday are opportunities to clear old stock (at a mild loss) and trigger a surge of spending that carries on well into December. Deals on toys, televisions and tablets are meant to pull you into stores, where you're likely to splurge on other things like towels ... or perhaps a new cellphone.

Depending on when and where you look this week you'll be able to snag a new flagship class phone for as little as a penny if you're willing to sign a 2-year contract. There are a few contract-free devices being discounted this weekend, but the bulk of them aren't exactly the amazing "doorbusters" they're being advertised as. They're throwaway phones meant for short-term use. That's not a knock against the cheap phone market, however. In fact, some of the most interesting developments in cellphone tech are focused on the so-called "low end."

Once upon a time when you walked into a store looking to buy a new cell phone, you were presented with three options. High-end devices like Apple's iPhone and Samsung's Galaxy line were cutting edge, but expensive. Mid-range phones like HTC's Desire series were cheaper, but not nearly as powerful. Low-end phones were the most affordable, but also the most technologically limited of the bunch. Their processors were slower, their screens were less crisp, and their build quality often left much to be, well, desired.

Looking at the market today, many things are the same. High-end phones are still pricey and aspirational while the midrange is still middling. Cheap smartphones, however, are in a state of disruption. Bargain-basement gadgets are giving way to bigger, better devices that are just as affordable. Manufacturers like Microsoft, Motorola and OnePlus are redefining what an affordable cellphone can do, and demanding that we put the term "low end" to rest. 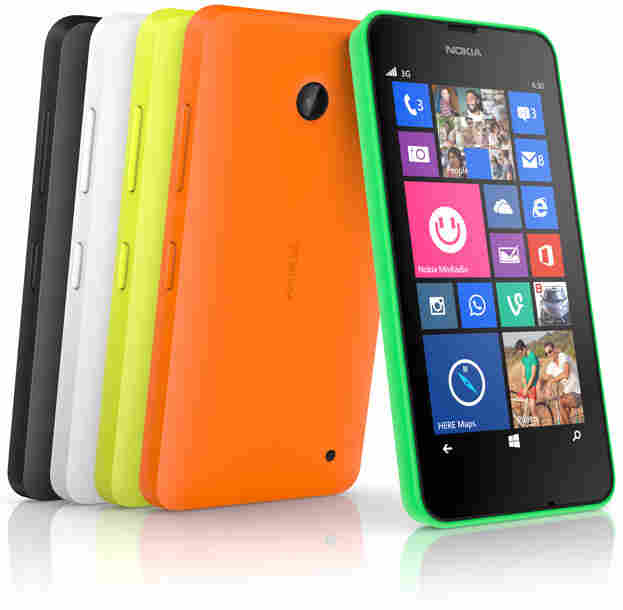 Before it was officially acquired by Microsoft, Nokia released the Lumia 520, 521 and 525 handsets that quickly became the most popular Windows phones in the world. A sub-$100 price point and fairly smooth everyday use made the series ideal for first-time smartphone users. Since then, Microsoft has rolled out more cheap models that feature significant hardware upgrades, while maintaining ridiculously low price points. Entry-level Lumias demonstrated what companies could accomplish by building software meant to run on simpler, cheaper hardware.

For the most part, the low-end smartphone market is dominated by Android. With Windows Phone 8, however, Microsoft targeted one of Android's biggest weaknesses — performance. As powerful and customizable as Android is, it has a track record of poor performance on phones with lower specs. Windows Phone may not be as popular as Android, but it's a relatively standardized platform — meaning that using one Windows Phone feels like using nearly every Windows phone.

Rather than treating the low end as an afterthought, Microsoft began the trend of treating it as an opportunity to provide all consumers with a compelling experience.

Not long after Microsoft's foray into the new "low end," Motorola followed suit with the Moto G, a $180 off-contract phone meant to perform like a flagship. Similar to the Lumias, the Moto G became a record success for Motorola and challenged what low-cost Android phones could be.

The rising quality of smartphones priced under $200 is making them more attractive to the average consumer, but the low end is being redefined from above as well.

There's nothing technically low-end about the OnePlus One except for its price. At $299 off contract, OnePlus's "flagship killer" is more expensive than most of Microsoft's Lumias or the Moto G. Compared to the iPhone 6 ($649), the LG G3 ($699), and the Samsung Galaxy Note 4 ($949), however, the OnePlus One is ludicrously priced. The OnePlus One features the same high-end components as its competitors, but has opted for a different kind of business model, which OnePlus co-founder Carl Pei likens to that of a startup.

"In building our company, we wanted to challenge the status quo," Pei explained in an interview. "By selling directly to consumers and utilizing social media and our online community to create interest, we were able to put a lot more value back into the device itself." 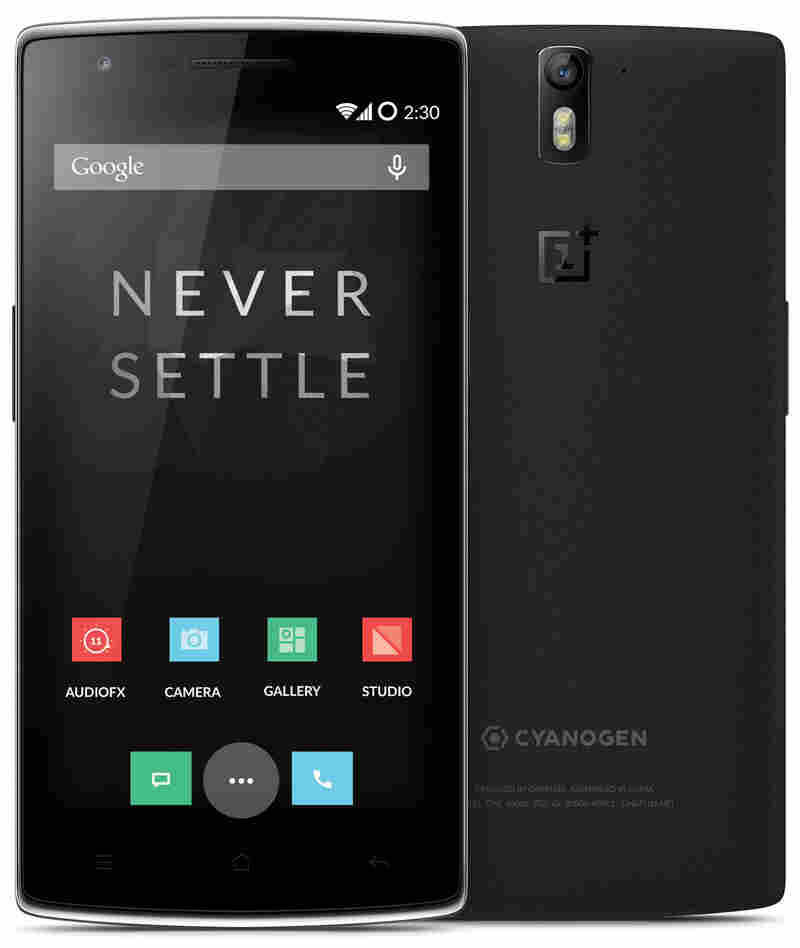 Unlike most other phones, the OnePlus One can only be bought online after receiving an invitation from the company or a friend who's purchased the phone. The system does the double duty of generating buzz around the device and allowing OnePlus to maintain a careful, cost-effective balance between supply and demand. Pei says OnePlus' focus isn't necessarily on its competition. It's on how people are purchasing their phones.

"Increasingly, people are starting to understand the true cost of signing a contract, and we want to make it easier to purchase a high-end device without having to give a large portion of money to a middleman," Pei said. "We're here to show everyone what's possible once you step outside of the traditional rules of the smartphone market."

The traditional rules of the smartphone market are what burned Amazon's ill-fated Kindle Fire Phone earlier this year and drove the company to discount the phone to a more reasonable $199 off-contract price. Today more Americans are buying smartphones under $200, and the market is responding.

ARM, the company that designs most of the world's cellphone processors, projects that by 2018 1 billion low-end smartphones will ship compared to 250 million high-end devices. What those devices will look like exactly is unclear, but it's obvious that the low-end market that we knew is evolving into something bigger, stronger and cheaper than ever.

Charles Pulliam-Moore is an intern at NPR's Code Switch who has a not-so-secret passion for mobile gadgetry. He tweets about tech, culture and the occasional pocket monster @CharlesPulliam.