Accessibility links
Amazon Unleashes Robot Army To Send Your Holiday Packages Faster : All Tech Considered In its endless quest to get goods to customers fast, Amazon has hired squads of speedy robots. In warehouses where human "pickers" walked miles a day, machines now zip shelves of goods back and forth. 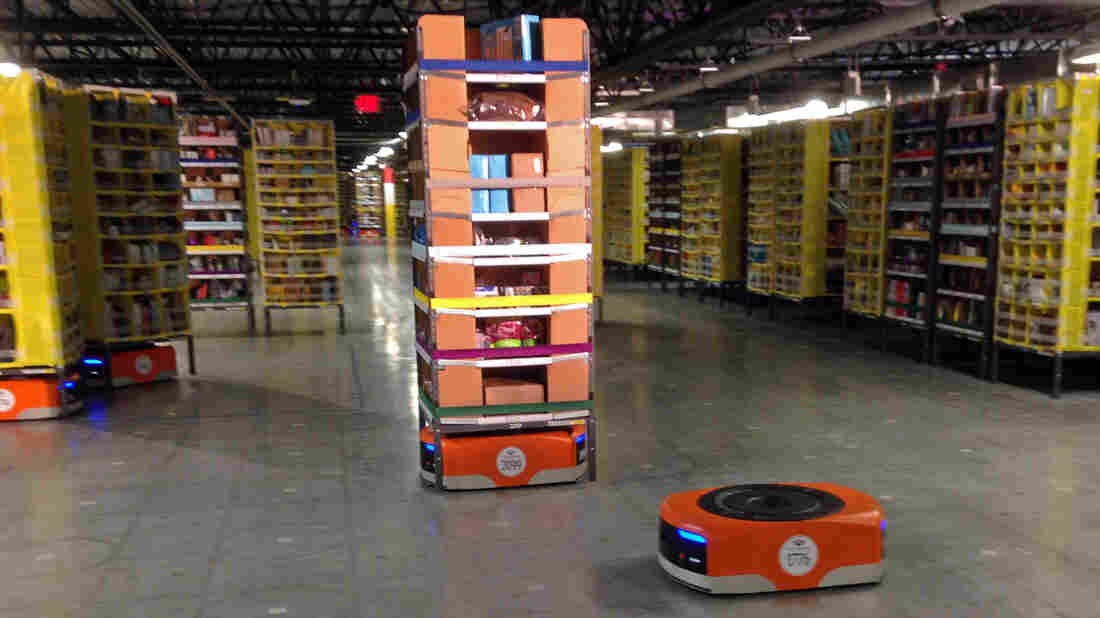 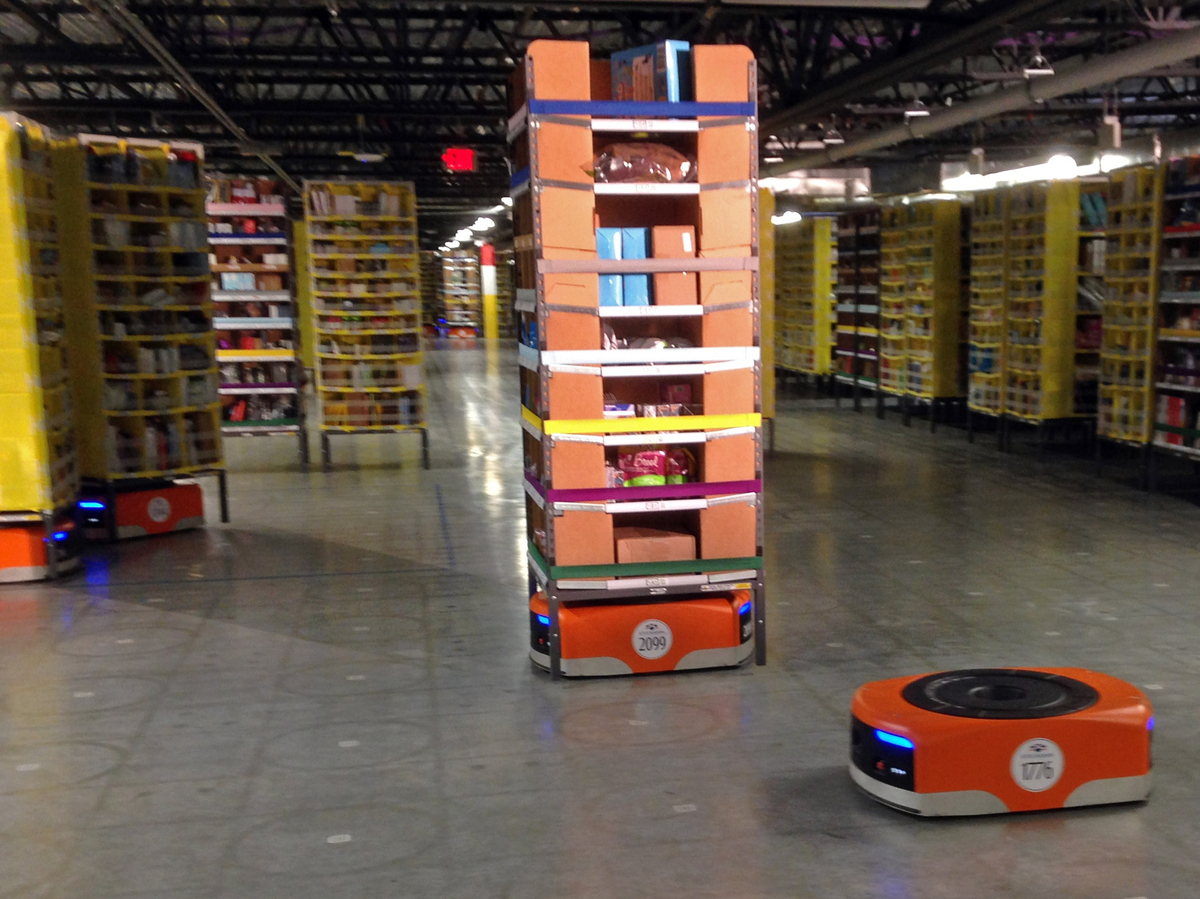 Kiva robots maneuver around one of Amazon's newest distribution centers on Sunday in Tracy, Calif.

For many online retailers, Cyber Monday is likely to be the peak shopping day of the year. To handle the onslaught of orders, Amazon has begun rolling out a new robot army.

The Amazon order-fulfillment center in Tracy, Calif., is more than a million square feet — or 28 football fields, if you prefer — filled with orange and yellow bins flying this way and that on conveyor belts. Chances are, if you ordered a bunch of items in the San Francisco Bay Area recently, Amazon put that box together here.

"Whether it's consumables or toys or electronics, with 3,500,000 items plus in this building, the odds are, pretty much anything you wanted was likely here," says Dave Clark, Amazon's senior vice president of worldwide operations and customer service.

At most warehouses, goods are held on shelves, and it's up to humans to go out into them to stock or retrieve stuff. But with technology that Amazon acquired when it purchased Kiva Systems in March 2012, the goods move to the humans. Orange robots the shape and size of ottomans zip under shelves, lift them up and whisk them to stations where people like Amazon's Reginaldo Rosales are waiting.

As each shelf arrives next to Rosales, packed to the gills with all sorts of items, a computer terminal displays the specific thing he's supposed to grab — in this case a thermometer — and where on the shelves it is. 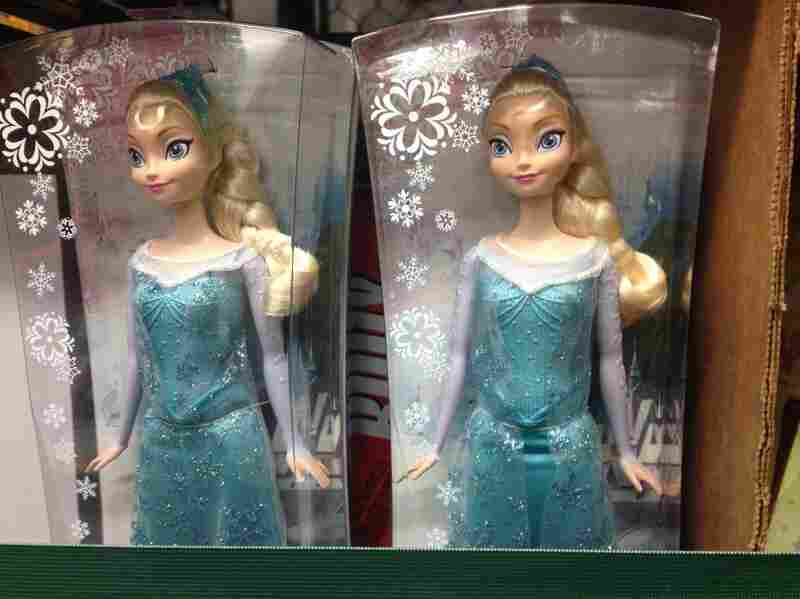 Dolls depicting Elsa from the Disney film Frozen — the movie's merchandise is expected to be the most popular gift for girls this holiday season — await pickup Sunday at an Amazon warehouse in Tracy, Calif. Rachael Myrow/KQED hide caption 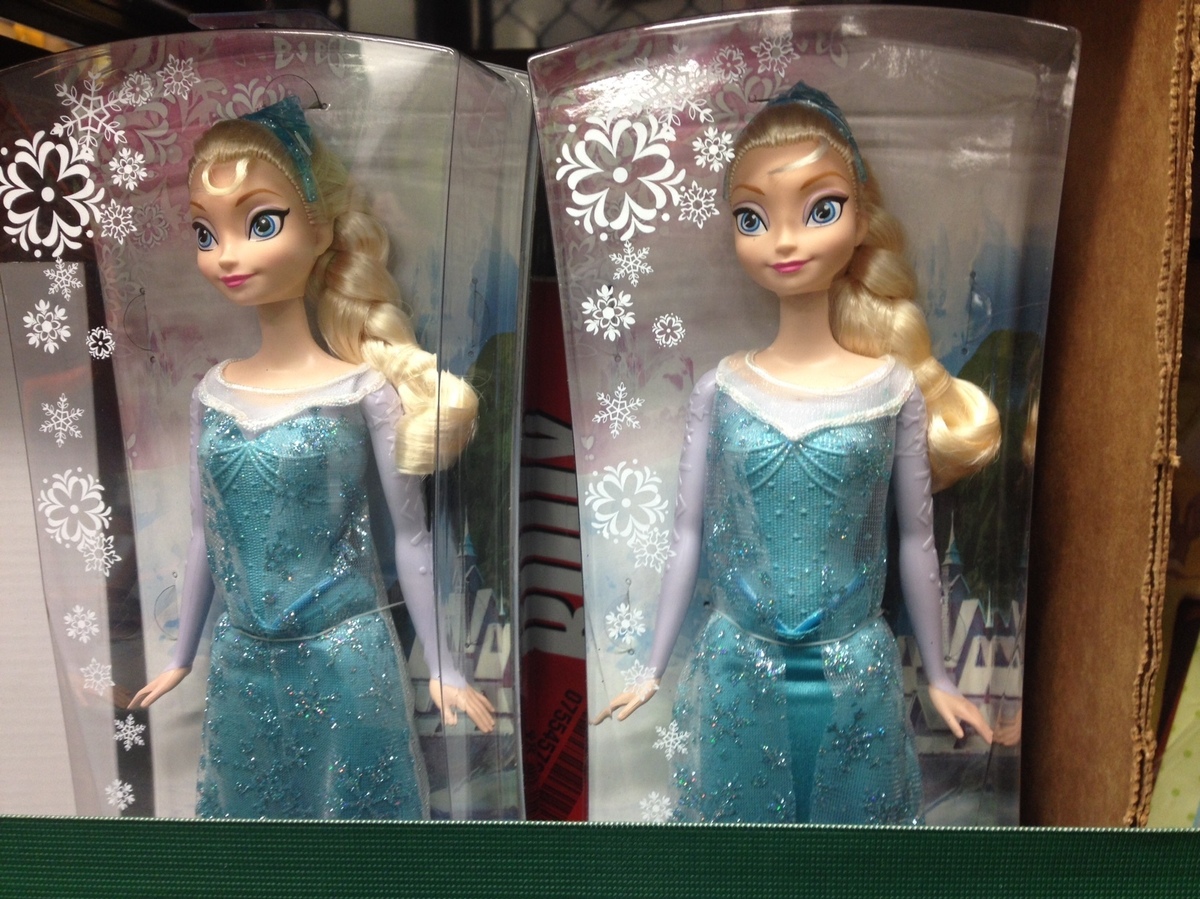 Dolls depicting Elsa from the Disney film Frozen — the movie's merchandise is expected to be the most popular gift for girls this holiday season — await pickup Sunday at an Amazon warehouse in Tracy, Calif.

"Now it's telling us the Monopoly electronic banking game," Rosales says. "We pick the item, we give a six-sided check — make sure it's not damaged — and it tells us what bin. And you confirm it."

Kiva's concept has been around for years now, but this rollout provides an opportunity to see it at great scale.

With this system, not only is there no need for workers to march for miles up and down the aisles — there's no need for aisles at all, which means Amazon can squeeze 50 percent more product into its warehouses.

"As these buildings get more selection, they do more volume," Clark says.

But the co-author of The Second Machine Age says the robots are at least as good as people at covering ground in warehouses and hauling merchandise. So why not let them do it?

There are 15,000 Kiva machines whisking around Amazon warehouses across the country; the company's engineers already are developing a next-generation robot.