Accessibility links
Gaza Tech Hub Finds Success In International Crowdfunding : All Tech Considered Billions have been pledged to help rebuild Gaza, but little of that money has arrived yet. But a startup accelerator is drawing interest and crowdfunding from around the region and the world. 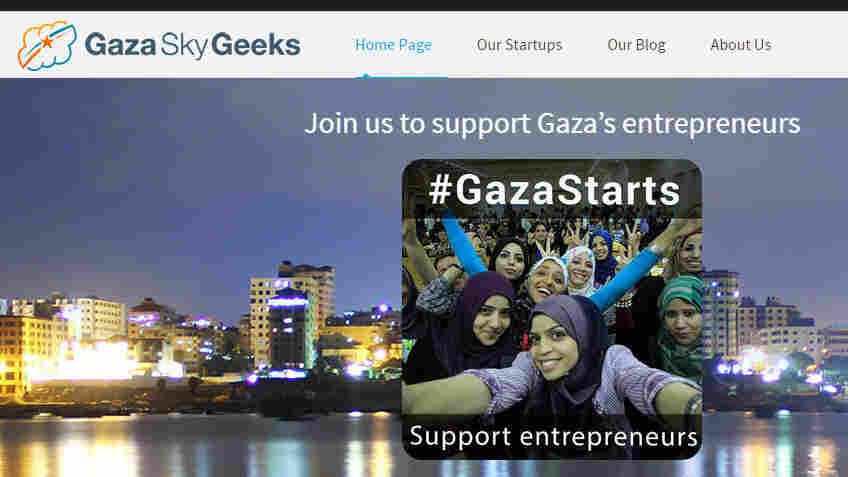 Gaza Sky Geeks, a startup accelerator, is drawing interest and crowdfunding from around the region and the world. Gaza Sky Geeks hide caption 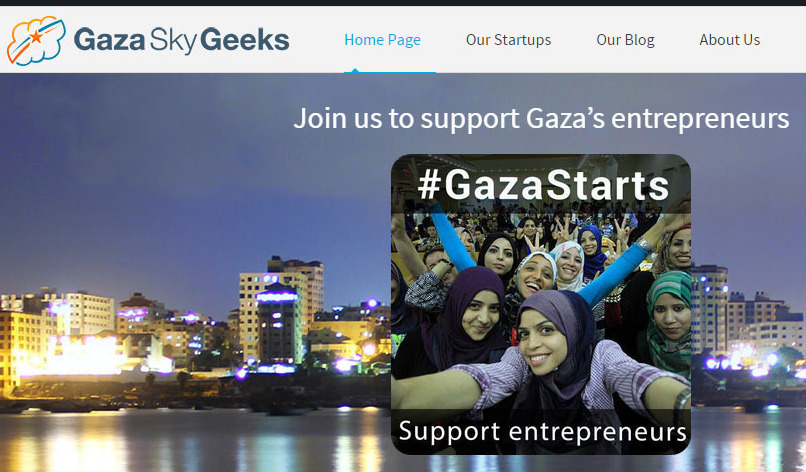 Gaza Sky Geeks, a startup accelerator, is drawing interest and crowdfunding from around the region and the world.

People in Gaza are getting impatient with the slow pace of rebuilding. International donors pledged $5.4 billion to help, but little of the money has made it to Gaza yet.

After one month of an Indigogo campaign, the tech hub Gaza Sky Geeks passed its minimum goal of raising $70,000 to keep the shared workspace in a Gaza City high-rise open. The group extended the campaign for a month to try to raise $250,000 — enough money to keep staff through next year and run an international hackathon.

Gaza Sky Geeks Director Iliana Montauk began to plan the fundraising campaign during the war this summer, as the major grant that began the program ran out. After three conflicts in Gaza over the past five years, she was unsure whether people would invest in Gaza again.

Now she says donors seem impressed that people keep working on startups in difficult conditions — and the war cemented that impression.

"Because Gaza was so present on social media, people began to get a sense there is a part of Gaza they didn't know," Montauk said. "Now when they hear about this, it builds on that knowledge."

The accelerator started three years ago with a $900,000 donation from Google.org, Google's charitable arm, to the international aid agency Mercy Corps to try something new. Mercy Corps has worked in Gaza since the 1980s. It now sends about $10 million in humanitarian aid to the coastal enclave annually.

For Palestinians, Google's Small Change Is A Big Deal

"For programs such as Gaza Sky Geeks that depend on international connections to thrive, particularly connections to tech-oriented people in the global startup community, it makes sense to raise funds this way," she said.

Google for Entrepreneurs continues to support the project with an undisclosed amount of cash plus in-kind help like access to mentors and the potential for Gaza geeks to visit Silicon Valley.

The largest donations — of $10,000 each — have come from business in the region: the Palestinian telecom company Paltel, the Bank of Palestine, and the Arab Palestinian Investment Co.

From Poland, Pawel Chojnacki, a self-described hacker/programmer thought he'd chip in $10 when he saw a post on an Iraqi programmer's Facebook page.

"But then I began thinking: I've been hearing about Gaza's problems for years and I don't find there's a better way to stop the hatred and the bloodshed than giving people hope," he wrote in an email interview.

"I won't buy my friends and family any Christmas gifts — but screw that, I gave people much more than another book or socks," he said.

Gaza Sky Geeks bills itself as Gaza's only startup accelerator. In a place with 40 percent unemployment, tech is seen as an area of potential growth.

But there are challenges, like no 3G cell network, and stringent Israeli travel restrictions, even for entrepreneurs.

UNRWA, the largest U.N. agency in Gaza, is planning a program that would give university graduates with programming and engineering skills practical experience through outsourced contract work for international companies.

According to the program proposal, about 1,000 Gazans graduate with information and communication technology degrees each year. But the sector hasn't grown, the proposal says, because graduates have too little employment experience to attract international companies.

Of course, Gaza's IT and startup scene pales in comparison to Israel's, with its Start-Up Nation moniker, next door.

U.S.-based donors top the list to the Gaza Sky Geeks campaign. But by the middle of this week, donors from Israel had given $986, just below donations from Lebanon and just above Jordan.

An earlier version of this post said that Gaza Sky Geeks extended its campaign to try to raise $25,000; the correct figure is $250,000. Gaza Sky Geeks is a startup accelerator, not an incubator. And we identified Andie Long as Mercy Corps' communications director; she is a senior communications officer.