Accessibility links
A Plan To Put Your Driver's License On Your Phone : All Tech Considered Smartphone and registration, please. Iowa is developing an app that would allow drivers to access a digitally encoded license instead of a conventional plastic ID card. 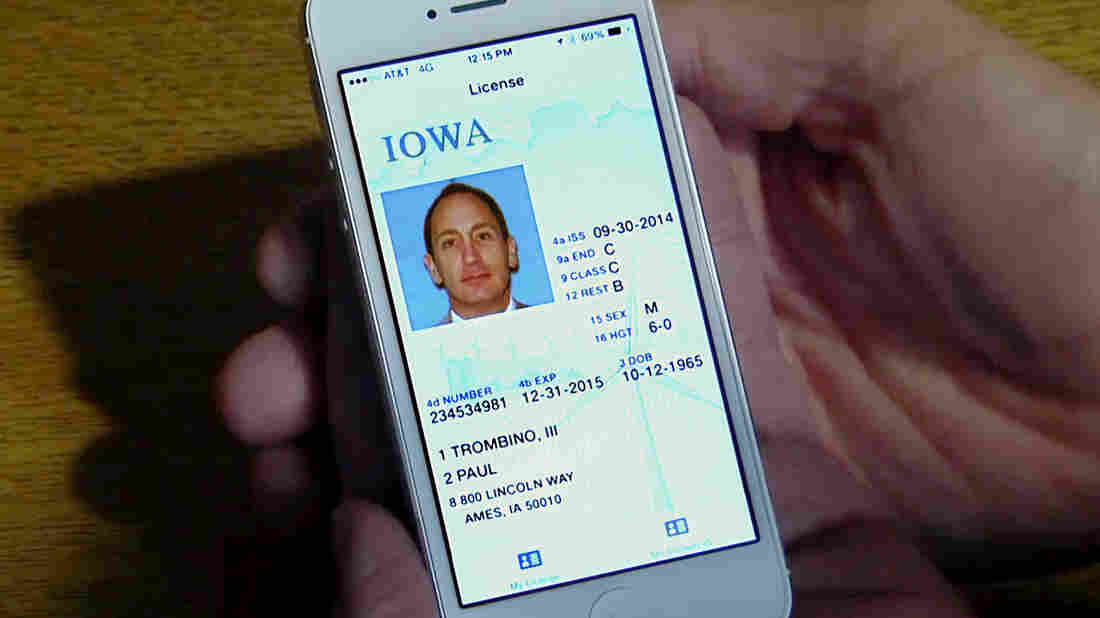 A screen shot taken from a video demonstrating how Iowa's digital driver's license would look on a smartphone. Iowa Department of Transportation hide caption

We're doing more and more things with our smartphones, so why not use them to store our driver's license? But when you think about it, you may not be comfortable handing your phone over to a police officer.

Motorists in Iowa may be among the first in the nation to be able to whip out their smartphones to access their licenses at traffic stops. The Iowa Department of Transportation is developing a smartphone app that would allow drivers to access a digitally encoded license that would take the place of the conventional plastic ID card.

"It's on your cellphone so you can carry it around with you," Iowa Department of Transportation Director Paul Trombino says.

At a recent statehouse briefing on the IDs, Trombino demonstrates that first you access an app on the Internet. Next, with a PIN you fill in the app with information from your physical driver's license. Then your new virtual license downloads into your phone for you to present wherever you need an ID.

But some Iowans who might be most affected by the change have their doubts.

"From a law enforcement perspective I really don't see any advantages," says Sgt. Scott Bright with the Iowa State Patrol. "The first thing I thought about is if we're making a traffic stop, is that violator looking for their cellphone before we stop the car."

Bright also doubts that officers could scan the information from a digital license without carrying the cellphone back to the squad car — and that raises obvious privacy concerns.

Computer security experts say the digital license could be more secure than a plastic license you might lose or leave lying around. But that doesn't mean there's any real need for this yet.

"People are more likely to leave their wallet at home these days than their cellphone."

"My thought is I wouldn't get one but not for security reasons," says Doug Jacobson of the Information Assurance Center at Iowa State University. "We've all stood in line at the airport behind the people trying to scan their QR codes to get aboard the airplane" after multiple attempts.

And Jacobson says it would take some time for most people to consider this a valid ID.

So with all the objections, what's the point of a digital driver's license? Andrea Henry at the Iowa DOT concedes there isn't exactly a clamor yet for this innovation.

"However, we do know that customers are demanding services through their mobile devices more and more. It's really about just keeping up with technology," Henry says.

MorphoTrust USA, the technology company developing the app, is pushing that concept to other motor vehicle departments around the country. Jenny Openshaw of MorphoTrust USA says customers do want to be able to renew their driver's licenses online and sees this as the next logical step.

"I think that the digital driver's license doesn't so much solve a problem as it fulfills a need and a desire on the part of the American consumer to have everything that is important to us in electronic form and on the mobile device of our choice. People are more likely to leave their wallet at home these days than their cellphone," Openshaw says.

Iowa officials predict a rollout of the new smartphone license this year or next. That's after security and privacy concerns are carefully addressed and after DOT employees test it out for customer comfort.