Accessibility links
'Maker Space' Allows Kids To Innovate, Learn In The Hospital : All Tech Considered At a children's hospital in Nashville, Tenn., a mobile maker space allows patients to share materials and tools to build new things, while also teaching them about math and science. 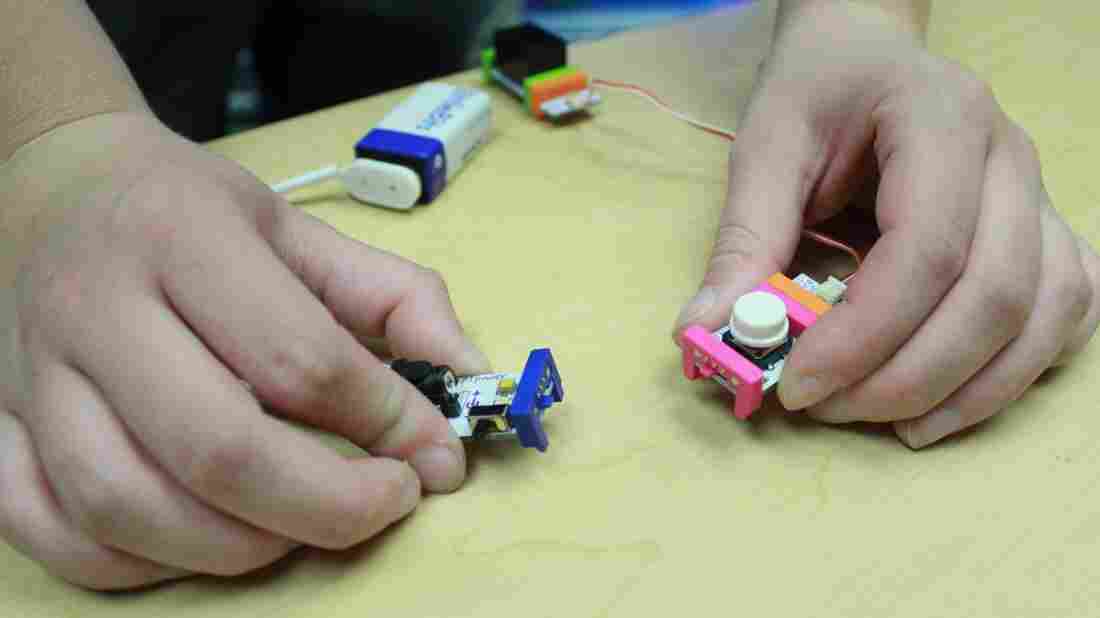 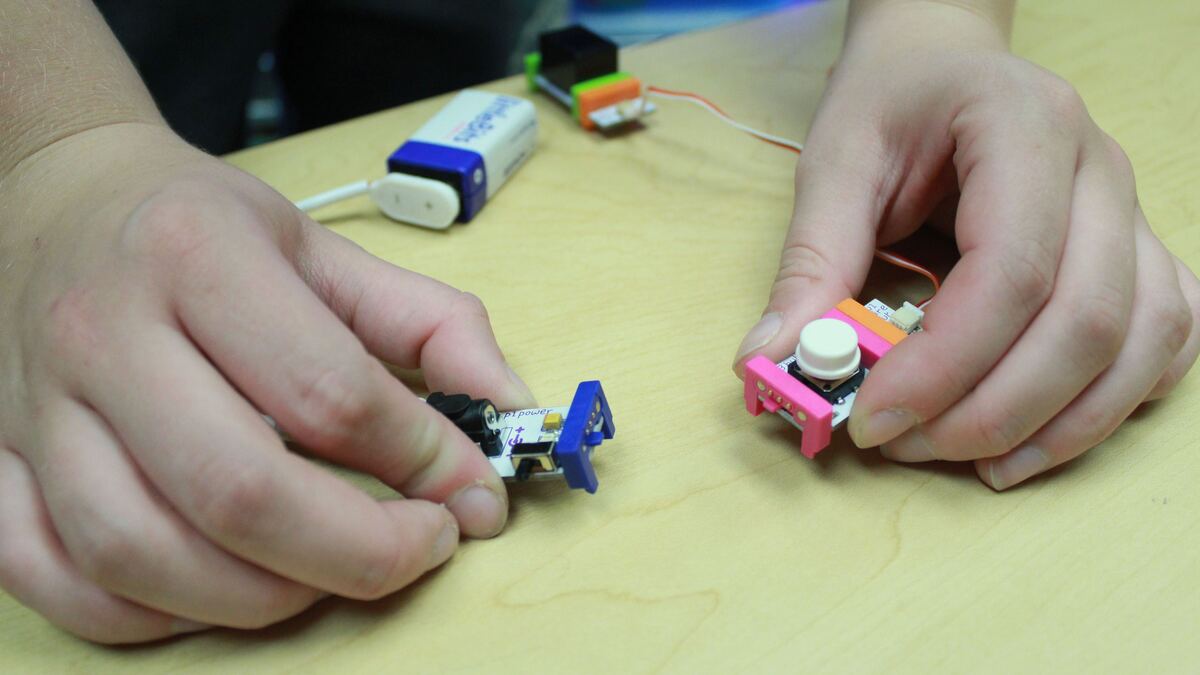 Emily Neblett, a patient at the Monroe Carell Jr. Children's Hospital in Nashville, Tenn., demonstrates circuit pieces from the mobile maker space that are connected by magnets.

All around the country, computer hackers, artists and other do-it-yourselfers are meeting up in "maker spaces," to share tools and build cool stuff together, such as robots or musical instruments. Maker spaces are popping up in all sorts of places: school auditoriums, libraries, under tents at community festivals, and now, even at the hospital.

At Vanderbilt University's Monroe Carell Jr. Children's Hospital in Nashville, Tenn., the maker space comes in the form of a large metal cart, carrying materials and tools young patients can use to create objects. The hospital services patients from all over the region, and many of those kids routinely experience long hospital stays.

Emily Neblett, 17, is one such patient. Neblett has cystic fibrosis, so she spends a lot of time in the hospital.

The Man Behind Common Core Math

"There's not really much to see from around the hospital from the room," she says. "It's just sick kids, and nurses and doctors."

Hospital stays can be isolating for kids, and keeping up with schoolwork can get tricky. That's where Gokul Krishnan comes in. He's a Ph.D. student at Vanderbilt's Peabody College of Education, and he has created a mobile maker space.

"Many patients who have chronic illnesses are not allowed to leave their room due to safety reasons and cross-contamination issues," Krishnan says. "That's why we bring the mobile maker space into the patient's room."

The space is a metal cart filled with the equipment and materials you would need for small-scale engineering projects.

"On the cart, I am looking at flashing lights and colorful drawers full of circuits, wires, Play-Doh and a huge, white 3-D printer," Neblett says.

At first she wasn't into it, but then Neblett realized there was one thing she really wanted.

"I decided to make the doorbell just because my nurses or anybody that would come in the room would never knock," she says. "So I put a sign on my door that said, 'Ring My Doorbell.' "

But to get that bell, she had to build it herself.

The point of this maker space isn't just to give kids with long hospital stays something cool to do. It's a pilot program designed by Krishnan to solve the problem of teaching science and math skills to kids inside hospitals. 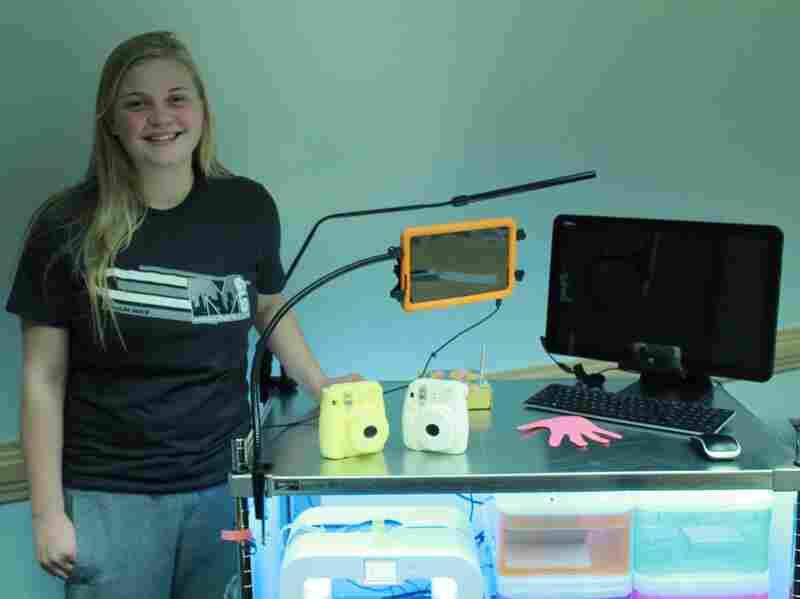 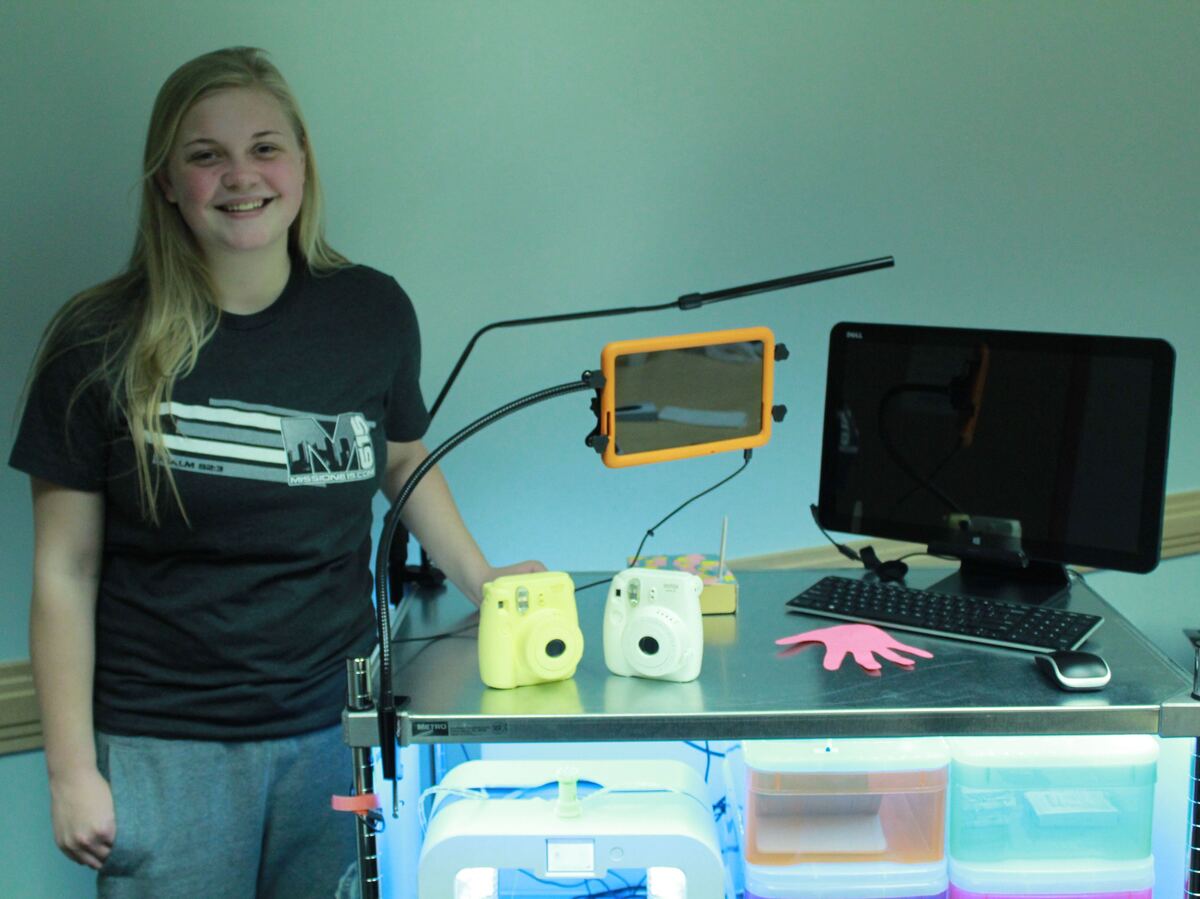 Emily Neblett poses with the first version of the mobile maker space at the Monroe Carell Jr. Children's Hospital at Vanderbilt University in Nashville, Tenn.

The project started when Krishnan met Brandon Bradley in September 2013. Bradley was in the children's hospital getting treatment for leukemia.

"I was planning on for my senior year just taking my math and reading classes and filling the rest of the slots up with engineering classes," Bradley says. "I asked my homebound teacher if she knew anybody, and she said that she might know some people, and a couple of weeks later, Gokul walked in."

"He was the first person I actually interacted with as a volunteer," Krishnan says.

Brandon made a "nurse nightlight."

"It would just light up the toilet and trash areas," Bradley says, "so if the nurses came in at night and they opened up the door and flipped the lights on, it wouldn't wake up the child that was asleep."

Krishnan credits Bradley as a co-founder of the project, which started a serious trial this winter at the hospital. One cart has become two, and pre-med students are now being trained to expand the project further.

Krishnan's pilot program creates a new role for patients. Now they can be inventors, and be part of a global maker movement.