Accessibility links
As Rules Get Sorted Out, Drones May Transform Agriculture Industry : All Tech Considered At farm shows across the country, drones have become as ubiquitous as tractors. Drone flights are mostly banned in the U.S., but on Sunday the FAA released long-awaited draft rules. 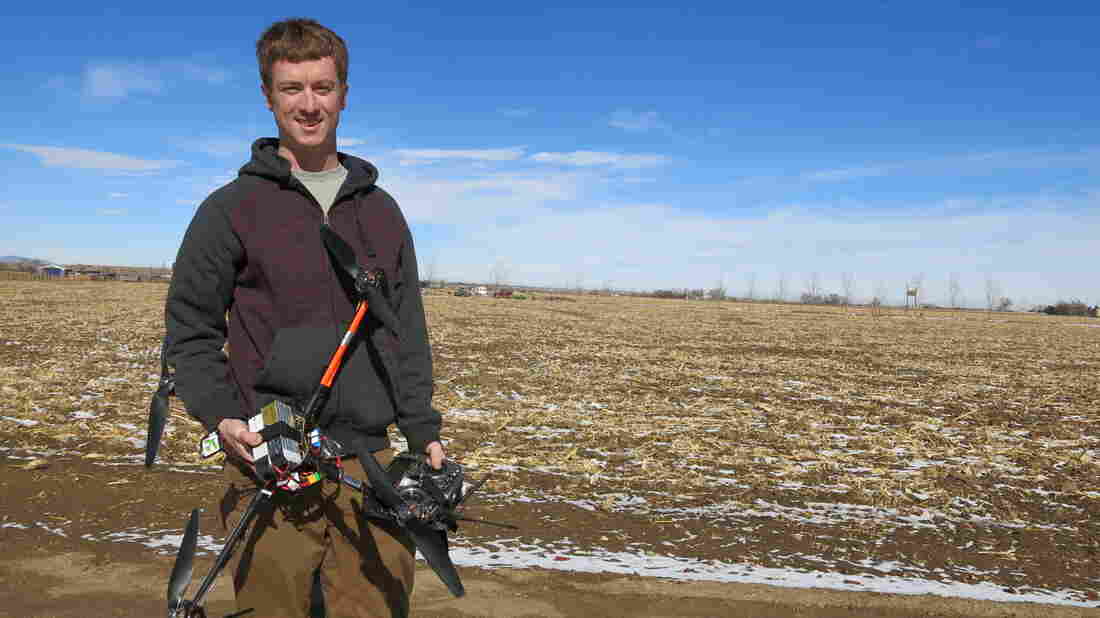 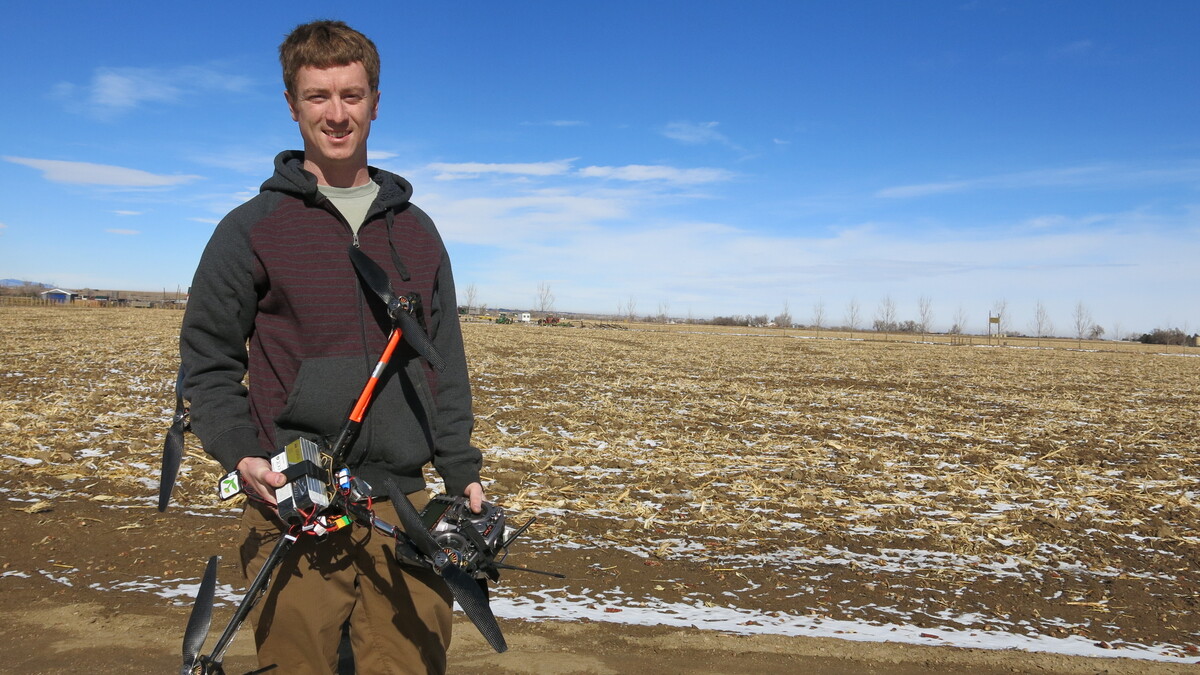 Weekly Innovation: This Drone Fits In Your Pocket

On a breezy morning next to a cornfield in rural Weld County, Colo., Jimmy Underhill quickly assembles a black and orange drone with four spinning rotors.

"This one just flies itself," he says. "It's fully autonomous."

Underhill is a drone technician with Agribotix, a Colorado-based drone startup that sees farmers as its most promising market. Today he's training his fellow employees how to work the machine in the field.

"So if you want to start, we can walk over to the drone," Underhill says. "It's got a safety button on here. And now it'll start flying."

The quadcopter zips 300 feet into the air, pauses for a moment and then begins to move.

"It just turned to the east and it's going to start doing its lawnmower pattern," Underhill says.

What makes the drone valuable to farmers is the camera on board. It snaps a high-resolution photo every two seconds. From there, Agribotix stitches the images together, sniffing out problem spots in the process. Knowing what's happening in a field can save a farmer money.

At farm shows across the country, drones have become as ubiquitous as John Deere tractors. The Colorado Farm Show earlier this year included an informational session, telling farmers both the technical and legal challenges ahead.

"I think it's a very exciting time," says farmer Darren Salvador, who grows 2,000 acres of wheat and corn near the Colorado-Nebraska border.

"Can you look at areas of disease concern, insect concern, so now you can be more proactive and treat smaller areas and not treat the entire field," he says.

Salvador and about 50 other farmers got an earful from Rory Paul, CEO of Volt Aerial Robotics, a St. Louis-based drone startup.

"We really don't know what they're good for," Paul says. "We've got a few ideas of where they could really benefit agriculture. The majority of which are still theoretical."

Theoretical because commercial drone use is still widely banned in the U.S.

On Sunday, the Federal Aviation Administration released long-awaited draft rules on the operation of pilot-less drones, opening the nation's airspace to the commercial possibilities of the burgeoning technology, but not without restrictions.

Currently, companies may apply for exemptions, but the FAA's requirements to get that exemption can be costly, like requiring drone operators to hold a private pilot's license.

"These small drones, that are almost priced to be expensive toys, are not reliable, and that's a concern of the FAA," says Eric Frew, who studies drones at the University of Colorado-Boulder.

The FAA didn't respond to requests for comment for this story, but Frew says the agency is trying to find a balance. Putting a large flying machine in the hands of someone who's inexperienced can cause big problems.

Back at the cornfield in rural Colorado, Agribotix President Tom McKinnon watches as the drone comes in for a landing.

"We bash the FAA a lot," he says. "I mean the FAA's job is air safety, and they have delivered on that. But when it comes to drones they're badly fumbling the ball."

McKinnon says until the agency gives solid guidance to commercial drone operators, he'll be doing most of his work in countries like Australia and Brazil where laws are friendlier to farm drones.

This story came to us from Harvest Public Media, a reporting collaboration that focuses on agriculture and food production.