Accessibility links
Now You Can Sign Up To Keep Drones Away From Your Property : All Tech Considered Most Americans worry that drones will invade their privacy, polls show. Thousands of people have signed up with NoFlyZone.org — the equivalent of a "get-off-of-my-lawn" warning to drone operators. 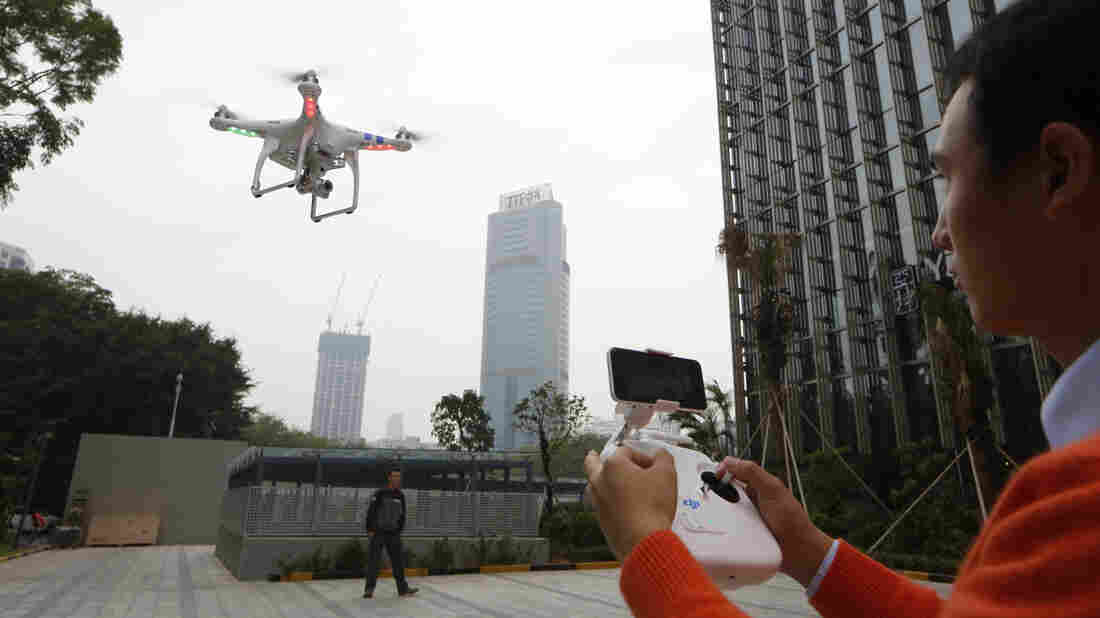 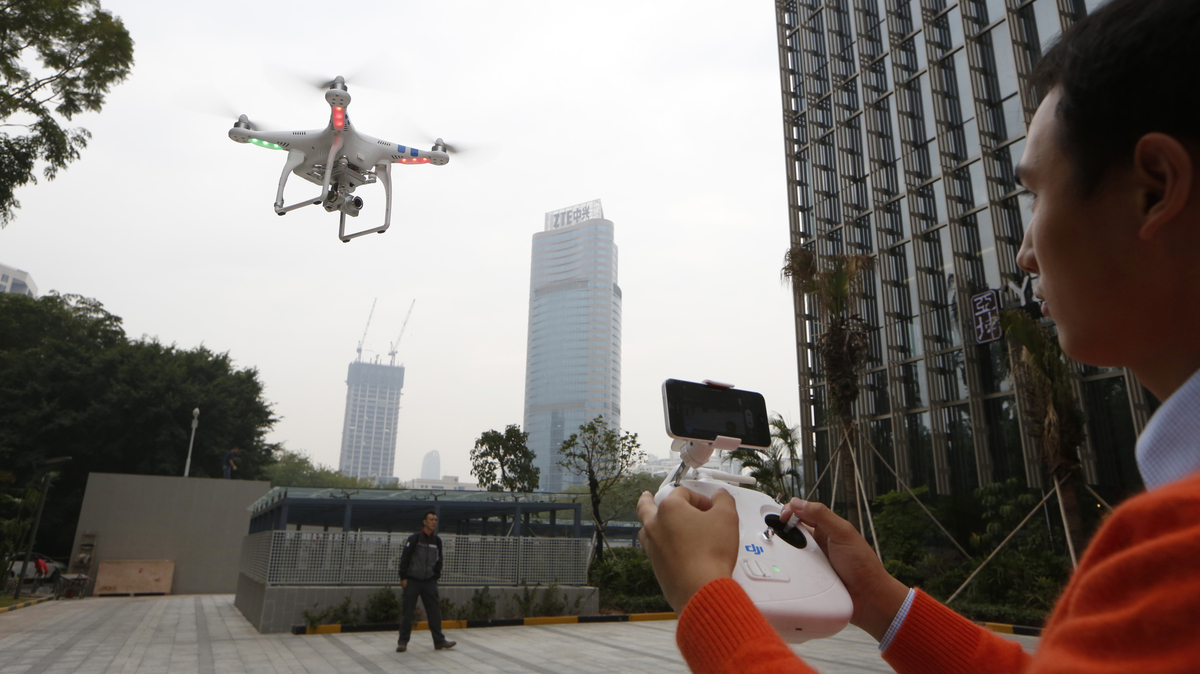 A staff member from DJI Technology Co. demonstrates a drone in Shenzhen, in southern China's Guangdong province. A new website lets people request that drones stay away from their property.

The Federal Aviation Administration is proposing regulations for the drone industry, but they don't include prohibitions against flying over your house. Polls show that's the kind of privacy invasion that worries Americans.

A new company has set up a way to let drone users know you don't want them over your property. It's called NoFlyZone.org, and it appeals to Robert L. Smith.

Privacy is so important to Smith that he moved out of the tiny town of Boonville, Ind., with population around 6,000, and he built a house on five acres 600 feet back from a country road.

"It seems like in every aspect of our life now, somebody's watching us," laments Smith. "I mean, you can't go to town, come back and not be on a bunch of closed circuit TVs."

Now that Smith lives out in the country, he's worried about drones. "I just want privacy," he says. "I'm retired. My wife is disabled, and I don't want no drone flying over my property."

So, when he heard about NoFlyZone, he signed up. Its website keeps a list of people like Smith who don't want drones flying over their property. This list is given to the makers and users of drones.

Ben Marcus, the CEO of NoFlyZone, says manufacturers can program drone software with physical addresses. "If you have quadcopter, for example, like a helicopter drone, that approaches the airspace, it will come to a hover rather than continuing into the airspace," he says. "If you were to try to take off from inside the airspace it wouldn't even start."

Complying with the wishes of people on the list is totally voluntary. But, the industry might be wise to pay close attention to it. According to a Reuters/Ipsos poll, 71 percent of Americans don't think that drones should be able to operate over someone else's property.

"This is a new industry," Marcus says. "It's really at its inception, and this is an opportunity for the industry to take a leadership position on these privacy issues and I think that they will."

The FAA proposed regulations for the industry last week. The agency acted after a drone landed right on the front lawn of the White House. The regulations will prevent drones from flying over people, but not property. Since NoFlyZone.org opened up a couple of weeks ago, over 20,000 people have signed up and seven drone makers are already using the list.

Andrew Amato, editor and chief of the DroneLife.com, says most drone users will be happy to comply. "Drone enthusiasts are generally pretty agreeable people, so the more popular this registry gets, the more the average drone flyer will check before he takes off," Amato says.

But, Bill Luebkemann, who lives in a Philadelphia suburb, doesn't believe everyone will respect his right to privacy. For him, signing up is a way of registering his protest over increasing corporate and government invasions of privacy.

"You have all kinds of government agencies eavesdropping on everybody," Luebkemann says. "You wonder why not do whatever you can do to protect your privacy just a little bit more."

Luebkemann does think drones are here to stay — and he even thinks they can be really useful for fighting fires, or in agriculture. But, like a lot of Americans, he wants the benefits of the latest technology without giving up what he feels is his right to be left alone.