Accessibility links
Wi-Fi Everywhere May Let You Roam Free From Your Mobile Carrier : All Tech Considered To get the most out of your smartphone, do you really need a cellphone plan? That's the question a Wall Street Journal reporter tried to answer by relying only on Wi-Fi networks for a month. 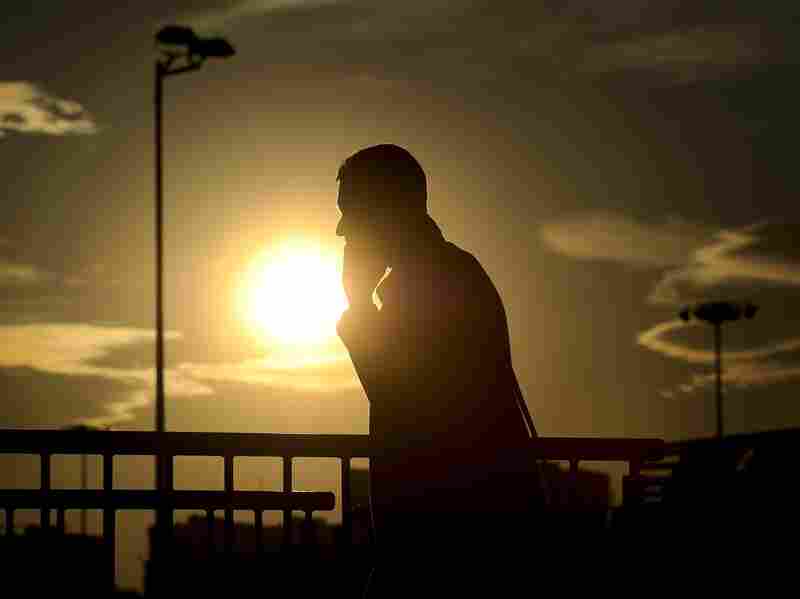 The sun sets as a visitor uses his mobile phone Monday during the opening day of the 2015 Mobile World Congress in Barcelona. Wall Street Journal reporter Ryan Knutson — interviewed from the conference Monday via Skype by NPR's Robert Siegel — says that for some smartphone users, Wi-Fi may be able to replace most of the functionality of a cellphone carrier. Josep Lago/AFP/Getty Images hide caption 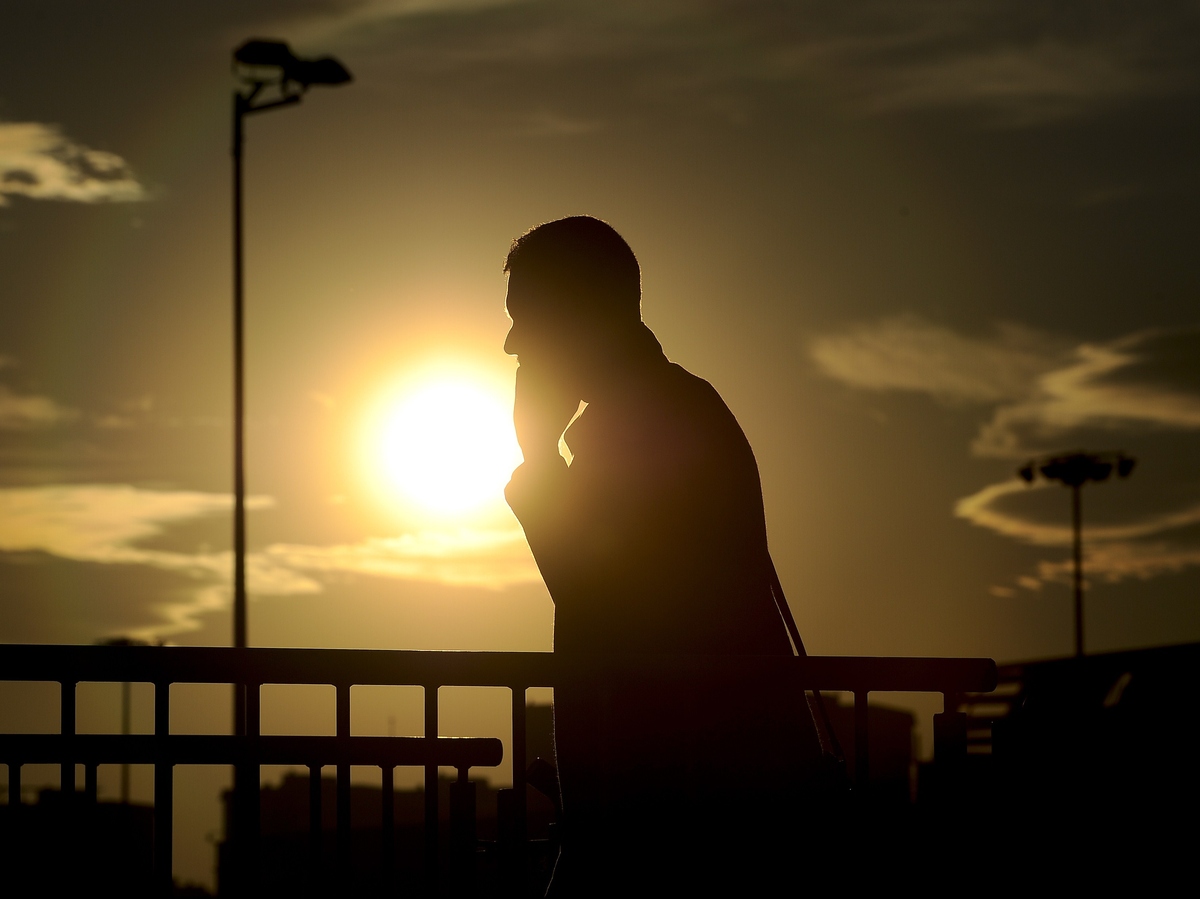 The sun sets as a visitor uses his mobile phone Monday during the opening day of the 2015 Mobile World Congress in Barcelona. Wall Street Journal reporter Ryan Knutson — interviewed from the conference Monday via Skype by NPR's Robert Siegel — says that for some smartphone users, Wi-Fi may be able to replace most of the functionality of a cellphone carrier.

To get the most out of your smartphone, do you really need a cellphone plan? That's the question Wall Street Journal reporter Ryan Knutson tried to answer recently, when he spent a month relying only on Wi-Fi networks for his mobile data and voice needs.

The results: By making some sacrifices and adjustments to your routine, you can get almost as much out of your smartphone, with a monthly bill of $0.

"Most buildings in New York and on a trip to Dallas had hotspots. Calls can be forwarded free to Google Voice or to Skype if you sign up for a plan. Internet apps like Apple Inc.'s FaceTime and iMessage, Google Hangouts, and Facebook Messenger make it easy to stay in touch with friends and family. Even the little blue dot on Google Maps will track your location without cellular service. It works in part by mapping Wi-Fi hotspots, in fact."

The frustrations of the switch were relatively minimal, Knutson told NPR's Robert Siegel in an interview conducted over Skype.

"One thing, I normally call my mother as I'm walking to the subway each morning, but with Wi-Fi, they're hotspots," Knutson said. "So you can't walk down the street or drive in a car while doing the Wi-Fi only plan, because the signals just don't carry far enough to cover you over long distances."

There are companies lining up to help you make the switch — an app to help you find nearby hotspots even if you're offline, companies stitching individual hotspots into networks, and carriers with cheap plans that rely on Wi-Fi first and roam on the network of a cellular provider, such as Sprint, as a backup.

Google on Monday announced its own plans to enter the cellphone carrier market, The New York Times reported:

"Google is experimenting with a hybrid approach that offers mobile voice and data services primarily through Wi-Fi signals. It would fall back on cell towers in areas where Wi-Fi is beyond reach, sources say."

The ease of his transition and the burgeoning competition could pose serious issues for the industry, Knutson writes:

"If millions of TV watchers are making do with a money-saving patchwork of online shows, over-the-air broadcasts and services like Netflix Inc. how long will it be before wireless subscribers decide they can get by making calls with Google Voice, sending texts via WhatsApp and asking for the Wi-Fi password every time they enter a bar?"

Knutson told Siegel that cellphone providers aren't worried about the competition, saying "there always will be a market for people who will pay money to have connectivity wherever they go," but that the pattern fits into one described by Harvard Professor Clayton Christensen in The Innovator's Dilemma — a low-cost, low-quality alternative that slowly improves until it has claimed the bulk of an industry's customers.

We heard Lauren describe making Skype calls while on a public bus. In fact, the mobile phone has become a necessity of modern life in little more than a decade. But it seems more and more that telephone companies may not be equally necessary. Ryan Knutson's article in the Wall Street Journal also highlights this. He thought, why not keep the smartphone and dump the carrier? Ryan Knutson, who joins us from the Mobile World Congress in Barcelona, tried this for a month. Welcome to the program.

RYAN KNUTSON: Thanks so much for having me.

SIEGEL: And first, give us a quick technical explanation. We can make calls on a smartphone without the services of a company like Verizon or AT&T.

KNUTSON: Yeah, that's exactly right. There's a proliferation of so-called over-the-top apps, which basically means these are applications that use the Internet instead of using your telecom provider. So when I did this experiment, I just - since it was an experiment, I didn't actually cancel my service. What I did was I put my phone on airplane mode and it just turned back on the Wi-Fi chip. I was still able to send iMessages. Those are like the blue messages on your iPhone. I could still do FaceTime audio calls, which is an excellent call quality. I could do voice calls on the Google Hangouts app. I could also use Skype. So there were plenty of ways that I could still stay connected via messaging or using my voice.

SIEGEL: So those are things that you could do over the course of the month. What couldn't you do without having a carrier?

KNUTSON: Well, one thing, I normally call my mother as I'm walking to the subway each morning. But with Wi-Fi, there are hotspots - emphasis on spot - so you can't walk down the street or drive in a car while doing the Wi-Fi-only plan because the signals just don't carry far enough to cover you over long distances.

SIEGEL: Of course, we should acknowledge that back in the Stone Age, say, in the 1980s, one couldn't call one's mother while walking to the subway routinely every morning.

SIEGEL: Well, do you think that you sampled the future, that as more hotspots are created, the Wi-Fi phone will someday become marketable?

KNUTSON: I do. And I think that I sampled the future in a way that is much more rudimentary than it'll be. And this is more about, I think, business models than it is about lifestyles. On the one hand, I actually appreciated very much the periods - which were admittedly pretty few - but I actually liked them when I was disconnected because I found that - you know, why do I get all of these buzzing messages? Like, why do I get let myself get bothered and annoyed by all of these things, all these notifications, when I can sort of control that I need to go find Wi-Fi, check my messages, respond and then go back to just experiencing in the real world? But the truth is is that Wi-Fi really is getting built everywhere. Cable companies have found that this is a really inexpensive way for them to expand their presence in the mobile world. So I think that we will see a day - because Wi-Fi is so much cheaper to install and build - that the majority of your services will be coming over Wi-Fi and you'll just use the cell carrier as a fallback for when you're not around Wi-Fi, which is increasingly less often.

SIEGEL: Well, are the very rich phone providers - are they worried that they might be rendered obsolete one of these days?

KNUTSON: It's really interesting talking to them about this. Their response is people want to be connected wherever they go, and that's a service that we can provide and that people will continue to pay for. So the cell carriers have air waves that travel farther than what's used for Wi-Fi. So they say that there will always be a market for people who will pay money to have connectivity wherever they go. The interesting thing about that response is that I spoke with Clayton Christensen, who's the Harvard professor who came up with the so-called innovator's dilemma, which is this idea that there are disruptive technologies that emerge from the bottom. They begin as very inferior, and they're only for people that want to get stuff that's cheap but not necessarily a very good quality, in this case Wi-Fi. But then that service begins to improve, and it improves to the point that the technology is actually the mainstream and this disruption emerges from the bottom. So there's a lot of Wall Street analysts that are starting to look at this, that this could be a significant arm to wireless carriers.

SIEGEL: That's Ryan Knutson of The Wall Street Journal. He wrote about using Wi-Fi and not telecom services for a month. He spoke to us from the Mobile World Congress in Barcelona. And I might add, he spoke to us via Skype. Ryan, thanks.

KNUTSON: Thanks so much.