Accessibility links
Mass-Market Stocks In Handcrafted Goods: Etsy Preps To Go Public : All Tech Considered The e-commerce site, which focuses on quirky, handmade goods, has filed for an IPO. The paperwork reveals a plan to focus more on manufacturing and marketing — but not much suggestion of big profits. 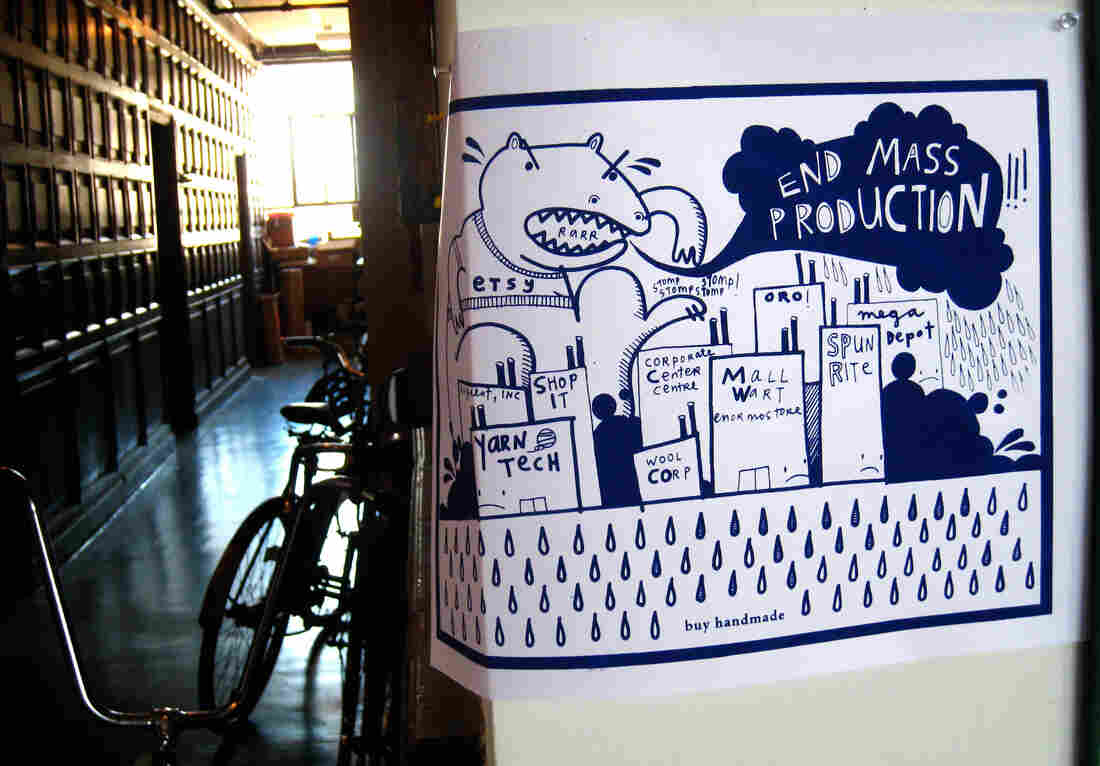 A sign at Etsy's Brooklyn office in 2007 encapsulated the company's ambitious goal: Take down big-box retailers by selling handmade goods. Now Etsy, which in 2012 began allowing some mass-produced goods on its e-commerce site, is filing for an IPO, and trying to maintain its values as it expands. Amit Gupta/Flickr hide caption 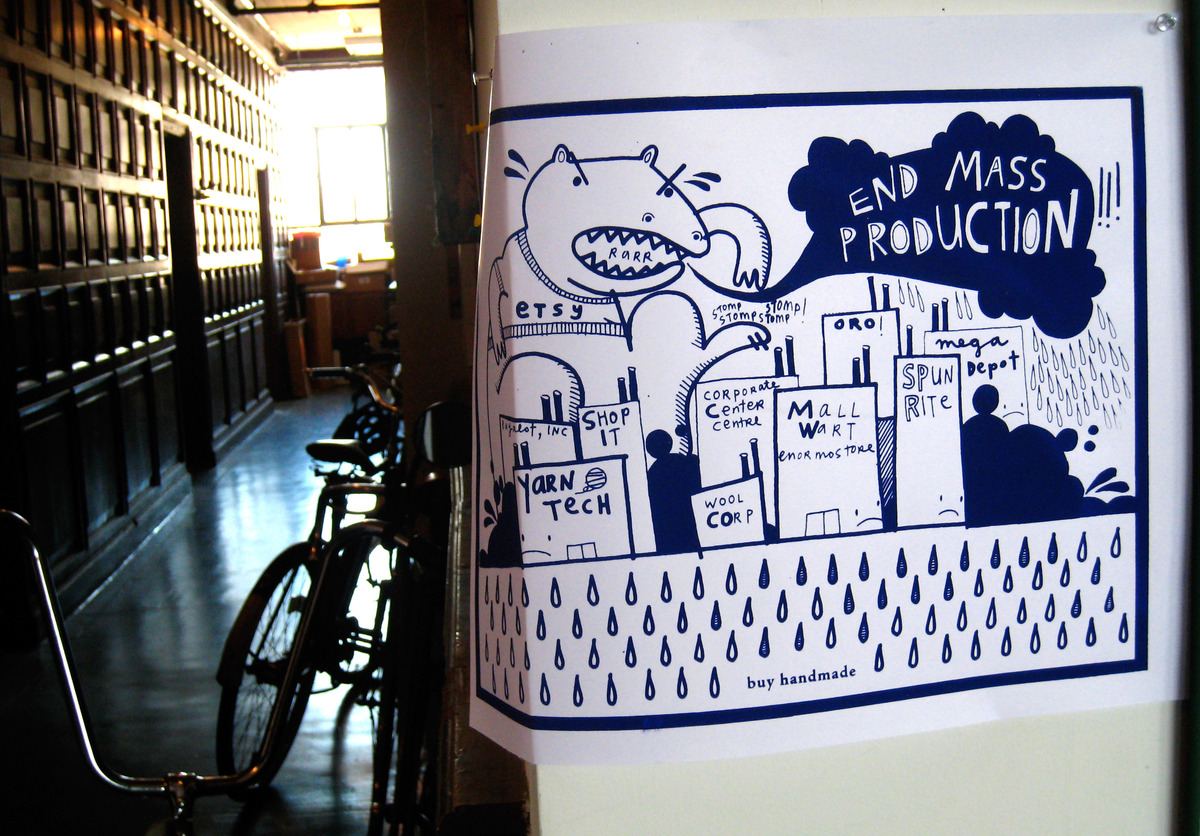 A sign at Etsy's Brooklyn office in 2007 encapsulated the company's ambitious goal: Take down big-box retailers by selling handmade goods. Now Etsy, which in 2012 began allowing some mass-produced goods on its e-commerce site, is filing for an IPO, and trying to maintain its values as it expands.

For sale: lovingly handcrafted shares of Etsy stock, proudly produced in the USA by a team of entrepreneurs, designers and coders. Please note, there may be some variation in size, color and profits.

A decade ago, Etsy launched as a way for crafters and DIY-ers to sell their handmade goods online. Now the New York-based e-commerce site has filed for an initial public offering.

The company starts off its filing paperwork exactly how you'd expect — with brightly colored pages that read "Connecting People" and "Reimagining Commerce" in a charming, loopy font. It'd look perfectly at home in an Etsy shop selling letterpressed posters. 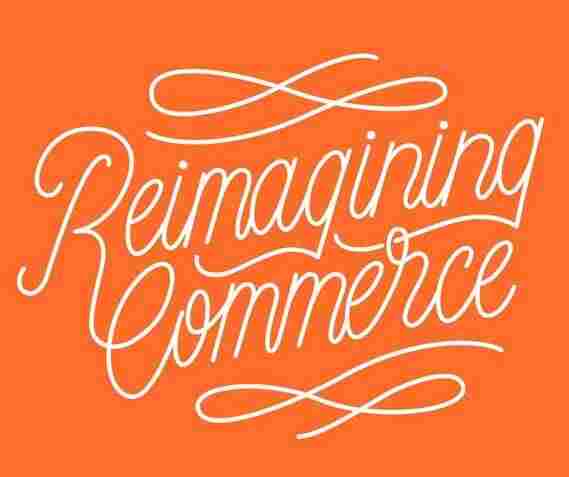 Etsy's IPO paperwork is full of numbers and facts — plus a few pages like this. Etsy/SEC hide caption

But there's more serious information in that document, too. The site has seen enormous growth — today it has nearly 20 million active buyers and 1.4 million active sellers, and it pulled in close to $200 million in revenue last year. But the IPO filing also reveals the company has been running at a loss for the past three years — and isn't terribly interested in turning a profit this coming year, either.

Here are some other takeaways from the filing:

Once upon a time, Etsy made the vast majority of its revenue by taking a cut of sales and charging for listings. In 2012, that made up 74 percent of Etsy's revenue.

A much smaller amount of money came from optional "seller services" — marketing tools like promoted listings, shipping labels and a PayPal-esque payment gateway.

That was three years ago. Since then, revenue from listings and sales has nearly doubled — but revenue from seller services has quintupled.

Selling convenience tools and advertising is less quirky and charming than bird-covered décor, but it's a key part of Etsy's future.

Brace yourself: Etsy plans to increase its manufacturing program.

The company's original appeal, of course, was the chance to buy directly from the makers of handcrafted goods. But mass-produced products have long been available on the site. For a long time, they had to masquerade as handmade; in 2013, Etsy issued a new policy explicitly allowing factory-made goods (with some conditions). The company said the plan was designed to help successful handcrafters grow their businesses, but many sellers and buyers saw it as a betrayal of handmade products.

The IPO filing and Etsy's job listings reveal that the company plans to move beyond allowing producers to use manufacturers — it's going to have a team dedicated to "helping sellers scale their shops." Details are scarce, but it sounds like they'll be working to connect sellers with factories — to transform successful handcrafting vendors into producers who can make and sell more product (and, not-so-coincidentally, might need to buy more seller services to support a higher volume).

An Advertising Blitz Is On The Way

After relying on word-of-mouth referrals for the better part of a decade, last year Etsy boosted its marketing budget by 122 percent. The company plans to continue to focus on increased advertising and promotion in the future.

The rise in manufactured goods may be partly responsible for the new ad push. Etsy's focus, as it says in its filing, is on the "thoughtful consumer" — the 53 percent of consumers who prefer to buy from an individual producer. Etsy believes its shoppers "value craftsmanship, artistry, uniqueness, authenticity and sustainability."

But will people feel the same way about buying factory-made goods? What if they're small-batch factories, or family-owned, or eco-friendly, or just plain photogenic? Advertising, Etsy hopes, can close the gap between a handcrafted brand and goods that aren't, technically, handmade.

It's Not Very Good At Making (Or Keeping Track Of) Money

When filing for an IPO, companies lay out potential pitfalls. Etsy doesn't beat around the bush here. The very first item on the list: "We have a history of operating losses and we may not achieve or maintain profitability in the future."

Etsy has run at a loss for the past three years, and it expects expenses to increase. It also reports two "material weaknesses" in its financial reporting — some sloppy accounting that it's working to address.

The accounting issue is a problem, but not turning a profit is actually OK with Etsy. They're not about making money in the short-term — in fact, quite the opposite: "Adherence to our values and our focus on long-term sustainability may negatively influence our short- or medium-term financial performance," they warn. 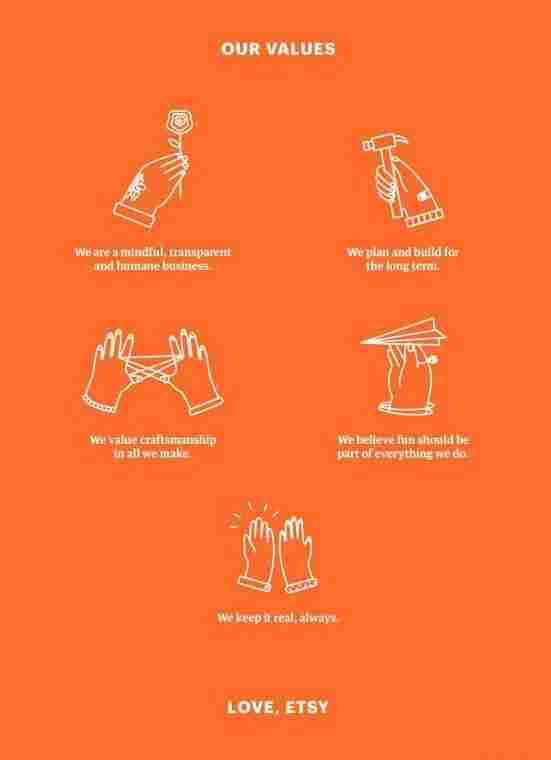 An Etsy manifesto, from its S-1 paperwork. Etsy/SEC hide caption

And potential investors, be advised: Etsy doesn't expect to pay dividends. In that, it joins an e-commerce site you just might have heard of: Amazon, which barely makes a profit and has never paid a dividend.

In short, in classic tech startup style, Etsy is making a case for investment based on growth, not on dividends or profit.

Etsy wants to maintain its values as it goes public — the filing emphasizes, again and again, its commitment to mindfulness, transparency, humane business practices, long-term thinking, craftsmanship, fun and, no joke, "keeping it real."

Going public, the company's heads say, won't warp them — instead, it will give them the chance to "make the world more like Etsy."

In their filing document, they quote Etsy seller Brandi Harper: "There is no bottom line to good deeds, but they are the best kind of currency in life and in business."

Right now, Etsy is looking for a more traditional kind of currency: The company is seeking to raise $100 million in the IPO.