Accessibility links
As Apple Watch Launches, Taking Stock Of Competitors And Possibilities : All Tech Considered The tech titan's latest device/platform drops into a busy gadget niche that has a big gender gap among early adopters. Still, analysts are expecting more than 10 million sales in the first year. 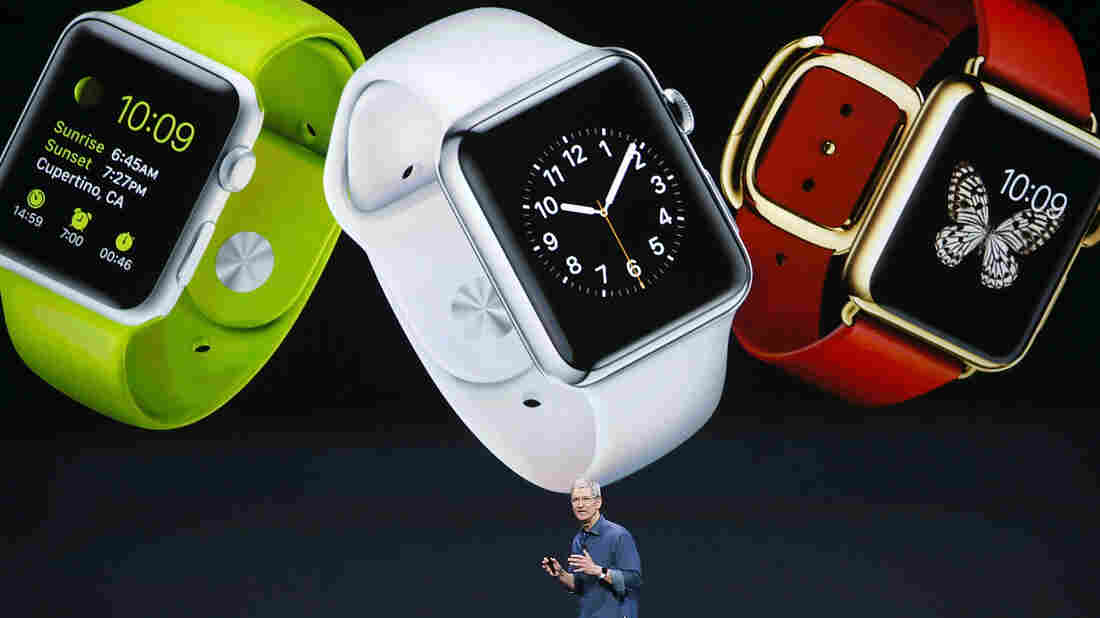 Apple CEO Tim Cook speaks Sept. 9 during an event at the Flint Center for the Performing Arts in Cupertino, Calif., where he unveiled the Apple Watch. The device officially goes on sale Monday. Justin Sullivan/Getty Images hide caption 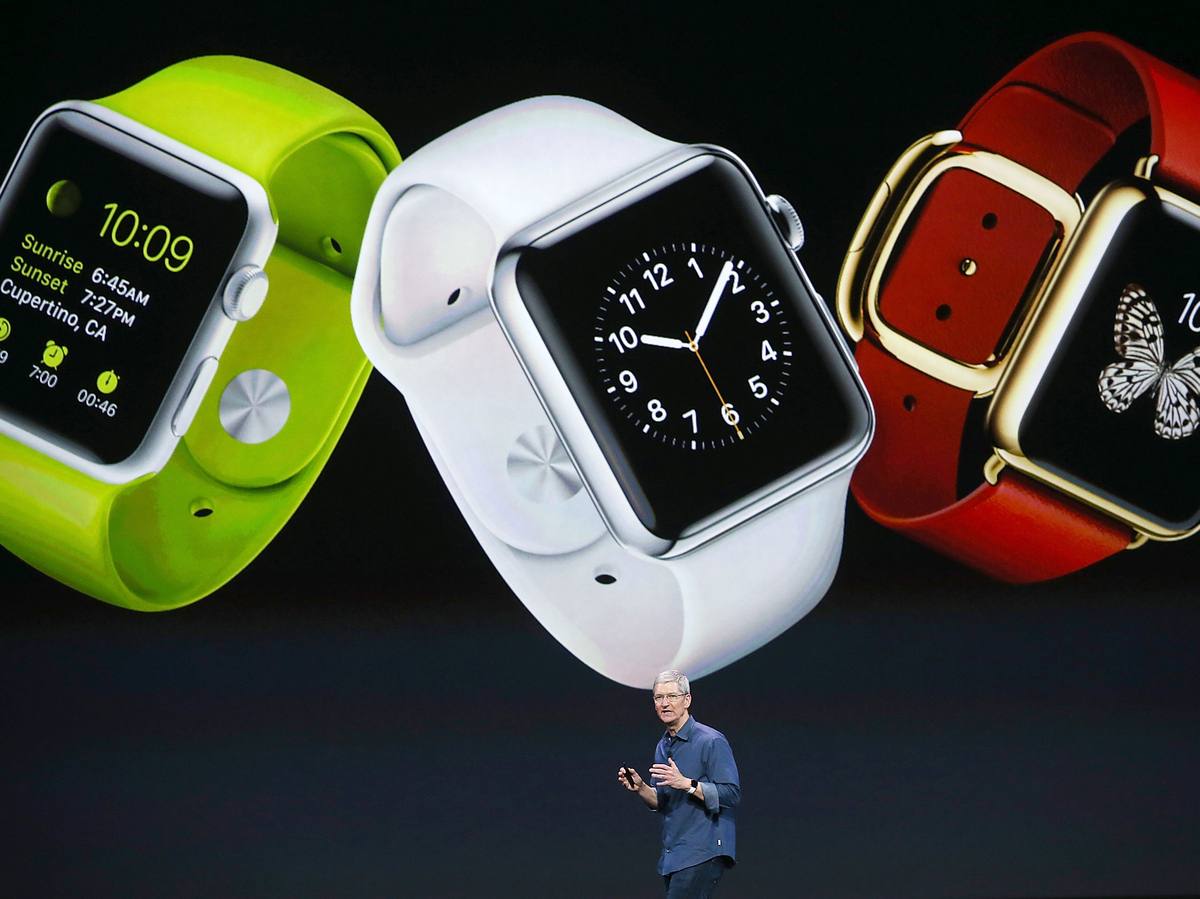 Apple CEO Tim Cook speaks Sept. 9 during an event at the Flint Center for the Performing Arts in Cupertino, Calif., where he unveiled the Apple Watch. The device officially goes on sale Monday.

Like an elephant splashing down in a mud hole, Apple's entry into the smart watch market is expected to have a huge impact. How much of one is a multibillion dollar question.

You don't see too many people wearing smart watches walking down the street, even in San Francisco. Even at the Game Developers Conference there last week, techies in attendance sported plenty of wearable tech, but few smart watches.

Paul Quinones was one of the few wearing one. The founder of Glass Wolf Games says a buddy bought him an LG G for Christmas.

"You can do a lot of very basic stuff," Quinones says, "like dictate, check your messages, send texts and all that. But there's no real, like, wow app or software for it that makes it the kind of device that you need to run out and get."

When Quinones gets an alert, his watch lights up and he glances at it without missing a beat.

"It's kind of nice cause then I get the convenience of not having to pull out my phone every time I get a message," he says. "I can just check from my watch." 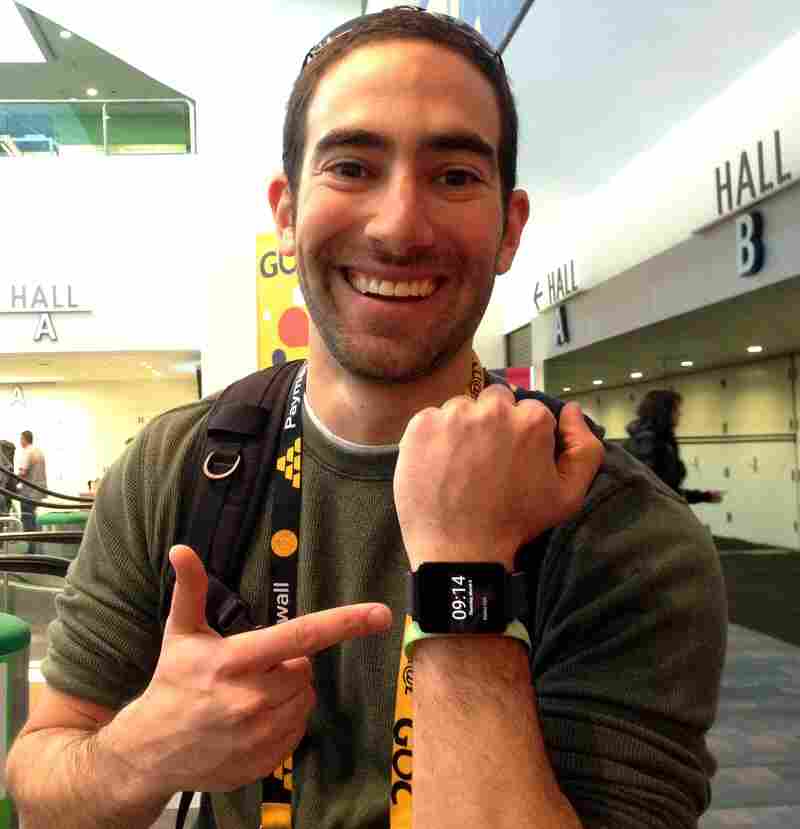 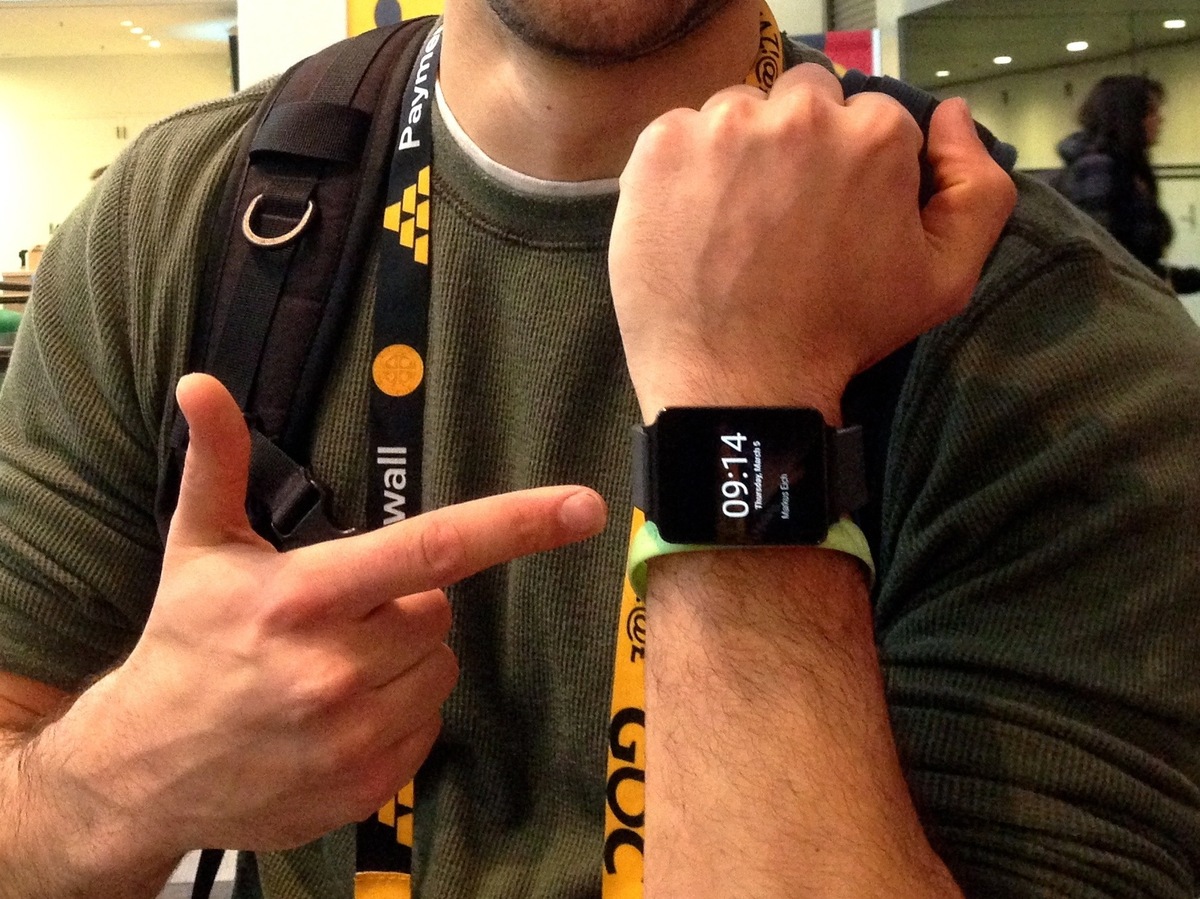 Eitan Marder-Eppstein shows off his LG smart watch at a March 2014 convention for Game Developers in San Francisco.

Google gave Eitan Marder-Eppstein, a senior project engineer with the company's mobile-focused Project Tango, a free LG smart watch. It turns out he was nostalgic for an analog experience the smart phone destroyed.

"I use it just to, actually, surprisingly, tell the time," Marder-Eppstein says. "I forgot how nice it is to have the time on my wrist."

Joshua Morgan, a tech lead for video game developer PlayStudios, got a Samsung Galaxy Gear S2, but only because it was an older model thrown in for free when he bought a Samsung smartphone a few months ago.

He says it starts conversations — as opposed to fights, like the ill-fated Google Glass. Morgan also can take phone calls on his watch — like Maxwell Smart, or Fred Flinstone, or Captain Kirk.

Morgan's being modest. But in a nutshell these early adaptors have described the appeal of smart watches: discreet, convenient, and they do some of things smart phones do. Last year, 4.6 million smart watches shipped, according to the tech research firm Canalys

The most popular brand so far is Pebble, which has shipped 1 million units since it started two years ago with a Kickstarter campaign. Predictions as to what Apple will sell vary wildly — Ben Bajarin, principal analyst at Creative Strategies, figures 10 million-30 million sales in the first year.

"Apple has a very loyal and large base that will purchase things just because they're Apple," Bajarin says. "Meaning that they'll give these products the benefit of the doubt."

He thinks that will be true in China too, even if prices start at $349.

"Their second biggest iPhone market is in China," Bajarin says. "There's a lot of people there who do buy very expensive products."

Analysts like Bajarin are predicting that China may be the largest market for the watch, given the demand there for luxury smart watches. Apple arranged the device's editorial debut in Vogue China rather than U.S. Vogue.

It's not clear if Apple can crack through what appears to be a gender barrier for the smart watch. Researchers have found that the female demographic is less interested in geeky gadgets with a wide array of features, preferring instead a slick and more minimalistic design.

"The wrist is sacred ground for a lot of people, regardless of gender," said Tim Golnik, vice president of product at Misfit. "Women definitely love the option to hide the technology or put it somewhere other than the wrist."

Misfit found through its research that the next generation of wearable gadgets would need to be "gorgeous or invisible" to appeal to women. Its health-tracking accessory is jewelry-like, and can be worn almost anywhere on the body.

Apple's executive team reflects the value it puts on fashion beyond its design department. The team includes Angela Ahrendts from Burberry and Paul Deneve, the former chief executive officer of Yves Saint Laurent.

The importance of fashion is not lost on Silicon Valley's other tech companies. Intel recently partnered up with fashion brand Opening Ceremony for a smart bracelet, and Fitbit teamed up with Tory Burch to create a more chic alternative to its Flex tracker.

For many Apple users, the Apple Watch's biggest appeal is the fact it plugs into the Apple universe of software and products. Even if the first generation is functionally modest, Bajarin says Apple can bank on an army of third-party developers to expand what's the device's abilities far beyond what the company itself dreams up.

"Look at the watch as this sort of platform for apps," he says. "The apps can create all these different experiences that can help the product appeal to a much wider, you know, mass-consumer public."

Before that fully evolves, Apple has developed playful touches designed for broad appeal, as demonstrated here at the Apple Watch unveiling last September.

"Believe me, it's that kind of touch that Apple has on its products, where they add those little things that help underscore –- not the value of the technology – but the benefits that the technology delivers," he says. "That's what Apple is so good at. I'm convinced that 10 million people in 2015 will find that compelling enough to buy an Apple Watch."