Accessibility links
Weighing Privacy Vs. Rewards Of Letting Insurers Track Your Fitness : All Tech Considered A major life insurer is offering lower premiums in exchange for policyholders' sharing activity data. But privacy advocates worry such programs eventually will be used to deny coverage. 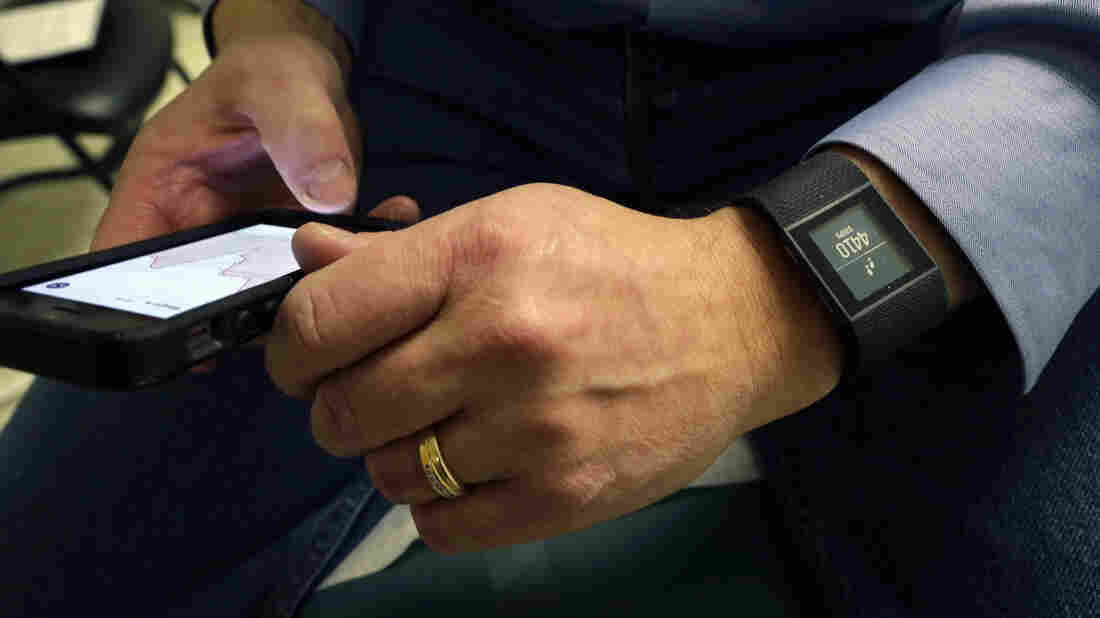 Patient Gary Wilhelm looks at his medical data on a smartphone that is synchronized to a new Fitbit Surge on his wrist. Mel Evans/AP hide caption 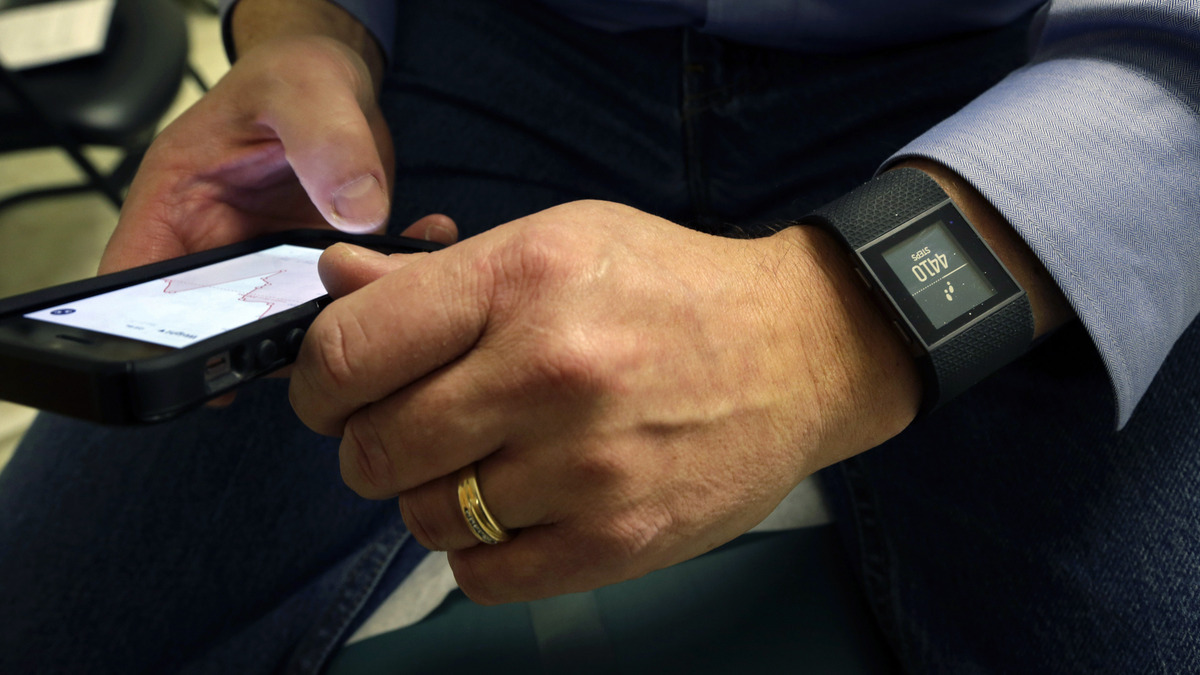 Patient Gary Wilhelm looks at his medical data on a smartphone that is synchronized to a new Fitbit Surge on his wrist.

Would you be willing to hand over your health information to a life insurance company, in exchange for financial rewards?

Activity trackers have become increasingly popular over the past few years, tracking everything from how many steps you walk to your location throughout the day.

Now, John Hancock, a U.S.-based insurer, hopes that fit and active people will exchange activity data for lower life insurance premiums and other perks. Those who sign up for this optional program, the first of its kind in the United States, will receive a free Fitbit device to track their activity levels.

This program, announced Wednesday, may seem like a win-win: Insurers can sell their product to a new market of gadget-loving millennials and in return, healthy consumers can access steep discounts.

But privacy advocates fear that programs like these will result in auto, health and life insurers hedging their risks by monitoring your every move.

"This is essentially a medical surveillance system," said Jamie Court of Consumer Watchdog, a nonprofit that advocates for taxpayer and consumer interests.

"This may look like a carrot to lure new customers, but it's ultimately a stick," he said. Court fears that John Hancock's program will slowly gain acceptance among young and affluent people, but over time insurers will build tools that will be used to deny people coverage.

"If you're hit by a car or something happens, insurance companies would go ahead and raise your rates. The more data they get, the more they can use it against us."

In other words, privacy experts fear that there's very little to stop a life insurance company from putting those who fail to stay active on a blacklist of sorts, which is akin to the experience of having a low credit score.

In response to privacy concerns, John Hancock told the New York Times that its policyholders' sensitive health data would not be sold to third parties. The firm stressed that the data will be shared only with Vitality, a corporate wellness company that it is partnering with for the initiative.

"I don't buy it," said Court, when informed about the company's efforts to safeguard people's health data.

Security experts also harbor concerns that insurers will not do enough to protect people's valuable health and location data from hackers.

"No data is immune from a breach," said Christine Sublett, a Silicon Valley-based security expert who consults with health-technology companies.

Health insurance giant Anthem recently experienced a security breach that left vulnerable more than 80 million people. In response to hacks like these, government agencies, including the Federal Trade Commission, have expressed fears that companies are failing to adequately protect health information.

"Would it concern the average John Hancock customer that unauthorized people, like hackers, knew they were at the gym every day at 5 a.m.?" Sublett said.

But others say John Hancock's program will have benefits for consumers.

"I think it's a great idea, as long as the program isn't mandatory," said Anica John, 35, a San Francisco-based new mother-to-be who is currently researching life insurance policies. John, a consultant for Silicon Valley-based startups, said she is impressed by John Hancock's plan.

"It's a great incentive for me to go to the gym," she said.

The plan is opt-in, so consumers can review it and decide if it's right for them, said California Insurance Commissioner Dave Jones, who said he doesn't have any qualms with the program. "Consumers can decide how much they want to share."

Some behavioral economists say that programs like these will do consumers a great service in the long term, by keeping them healthy.

For its new program, John Hancock is teaming up with Vitality, a global wellness firm. Vitality works with employers, who have long been tracking workers' fitness habits and rewarding those who stay healthy.

Dan Ariely, a behavioral economist at Duke University, recently completed a research study exploring the factors that are most effective for increasing healthful behaviors, using a sample of more than 6,000 South African families from Vitality's network.

According to Ariely, programs like John Hancock's are a promising trend from a public health perspective, as long as the data don't fall into the wrong hands.

"This concept is called immediate gratification," he said. "In principle, we know we should do things for our long-term health, but it's very hard to do. Sometimes we need a little extra pressure to stay healthy."

But Ariely said many companies should do a better job of including low-income employees in their programs. Many people who work several jobs may not have much time to exercise or may have limited resources to buy and prepare healthful foods.

Those who have studied the John Hancock program fear that the plan in its current state would raise rates for low-income people and new mothers.

Bobbi Thomason, who researches such topics at Stanford University's School of Management Science and Engineering, said some groups may not exercise regularly, as they juggle multiple jobs or have limited child care options. And some women may not be able to exercise for medical reasons before or after giving birth.

Experts say it's impossible to predict whether John Hancock's program will prove successful in the U.S.

And some plans have been met with outright resistance. The "wellness" program at Penn State University prompted backlash, after the news spread that workers were being forced to share detailed health information or risk paying penalties of up to $1,200 per year.

"In our experience, some 60 to 85 percent of employees are willing to give up their health information to their employers, in exchange for discounts on their premiums," said Derek Newell, chief executive of Jiff, a company that works with employers to design corporate wellness programs.

Privacy advocates are worried about this trend, given that regulation hasn't kept up with the digital age.

Privacy laws haven't evolved quickly enough to protect health information that is generated from a growing number of wearable devices, said Lee Tien at the Electronic Frontier Foundation, a nonprofit digital-rights group based in San Francisco.

In the meantime, employers are forging ahead with corporate wellness programs. And workers are increasingly demanding access to these devices, without fully grasping the risks.

"These programs are creating norms of socially acceptable monitoring. This is a less obvious, but very real concern of ours," Tien said.