Accessibility links
More Black, Latino Teens Say They're Online 'Almost Constantly' : All Tech Considered About one-third of black and Hispanic teens say they're online just about all the time, compared with about 1 in 5 whites, a new study says. Experts say smartphones are defining teens' social habits. 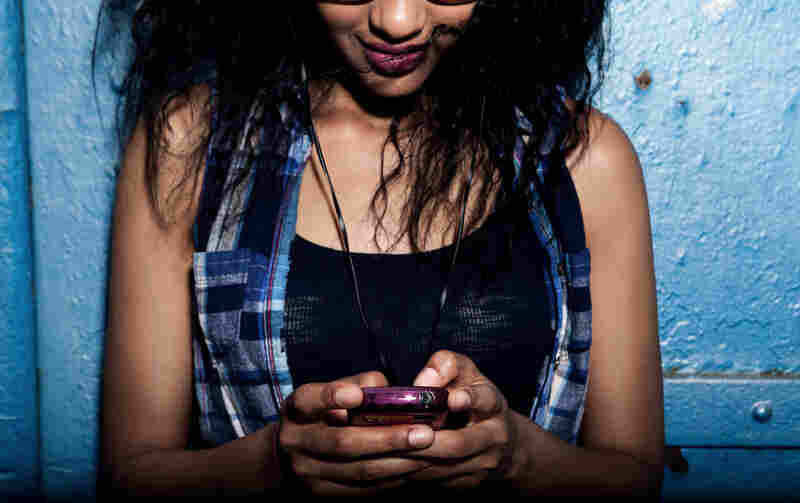 About one-third of black and Hispanic teens say they're online just about all the time, compared with about 1 in 5 whites, a new study says. 27 Studios/Getty Images hide caption About one-third of black and Hispanic teens say they're online just about all the time, compared with about 1 in 5 whites, a new study says.

So says the Pew Research Center's latest study, "Teens, Social Media & Technology Overview 2015," in which we officially learn that teenagers spend as much time online as adults think they do:

While phones seem poised to hit a full saturation point across the board, there are meaningful differences in how various demographics use them.

Katie Naoum, a middle school English teacher at South Bronx Prep, was one of the dozens of teachers who surveyed her students for a New Tech City project exploring some of those differences. Her classes are for the most part African-American or Hispanic, and the South Bronx is one of the poorest districts in the country. While everyone in her class has a cell phone — most have iPhones — not all have home computers.

Pew: 'Smartphone-Dependents' Often Have No Backup Plan For Web Access

"If I give an assignment like a paper that needs to be typed, when they go home they're typing it with their thumbs instead of typing it on a keyboard. That's something our school is trying to remedy," Naoum says. "We're giving away free laptops to every sixth-grader. But a laptop breaks, a laptop gets stolen, a laptop gets sold for whatever reason, and that kid has no computer anymore."

Naoum says her school wants to work out better ways to incorporate the technology her students are already using into the classroom. Texting, screenshots and conversations about what she calls "text message code-switching" have become a regular part of her lesson planning.

Ayori Selassie in Oakland, a Silicon Valley engineer and STEM advocate, says that kind of thoughtful incorporation of technology needs to be top of mind for educators and youth centers hoping to make any difference in a 2015 teenager's life.

"The core distinction between social class and social media use is the level of access and guidance to stimulating and engaging experiences," Selassie says. If parents think their neighborhoods are dangerous, she says, "the first thing you are going to tell your kids is, 'Don't go outside, it's not safe.' Suddenly your child is better off on social media or playing a video game than out in their community meeting people in their neighborhood."

For Ivory Toldson, an associate professor at Howard University, the Pew study is another sign that more emphasis is needed on exposing black teens to science, technology, engineering and math.

"Young black people are not just consumers, but also inventors and innovators of mobile technology; creating apps ... ," he says. "It is important for us to use the results of this survey to promote STEM education at predominately black grade schools, and historically black colleges and universities."

The Pew study says 11 percent of teens with cellphones say they use anonymous apps like Whisper, Yik Yak and Ask.fm, but Hispanic teens are nearly twice as likely as white teens to use such apps.

Rey Junco, an associate professor of education and human computer Interaction at Iowa State University, says anonymity online "allows the disenfranchised to have a voice.

"Participating in this way on social media helps them feel like they are part of a community and culture since their identity is not tied to it and they don't feel they can be harassed or ridiculed. This is one of the positive aspects of anonymity on social media," Junco says.

One point that holds true across the board: The way teens use tech keeps changing. When Pew conducted its last comprehensive study on teens and technology use in 2013, Snapchat was too new to be on the radar, let alone comprise a significant proportion of teenaged gossip and flirtation.

And for the parents, teachers and grownups who grew up smartphone-less — you know, all of them — there's no small amount of mystification about what's actually happening on the younger set's screens and in their heads. Check out New Tech City's series on talking to kids about technology.

Ariana Tobin is a producer for New Tech City, WNYC's podcast about technology and culture. Davar Ardalan is senior producer of NPR's Identity and Culture Unit.