Accessibility links
A DIY Dream: What If Apple Had Made A Watch In 1985? : All Tech Considered The Apple II watch, designed by 24-year-old DJ Harrigan, is meant to parody the new Apple Watch and show what wearables might have looked like in the 1980s. But he says he probably wouldn't wear one. 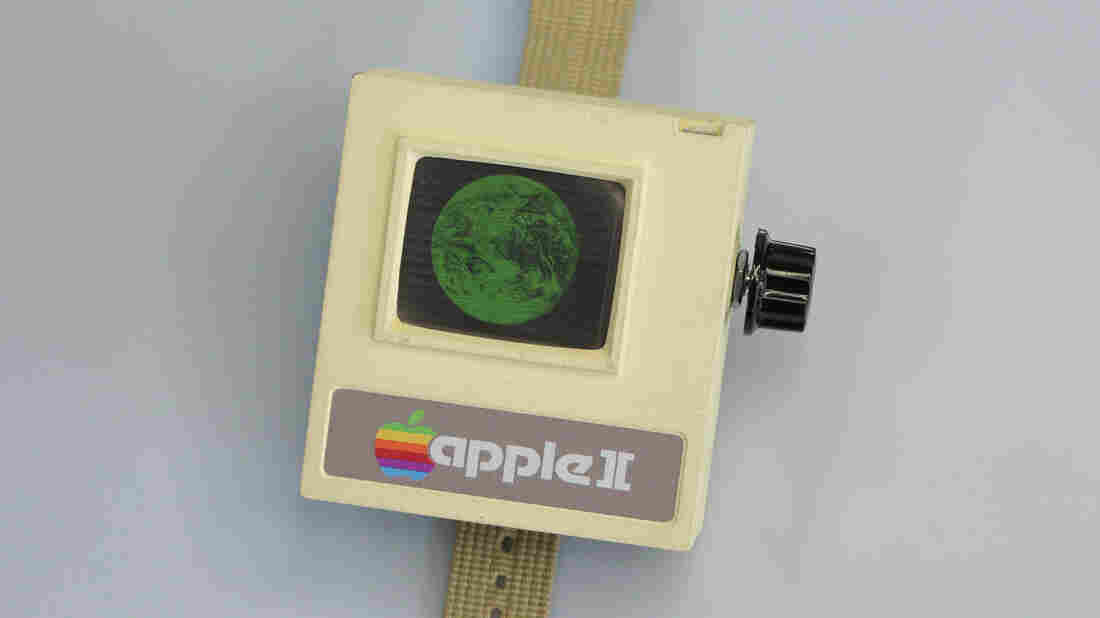 The Apple II Watch is meant to parody the Apple Watch and show what wearables might have looked like in the 1980s. Jon Brown/Instructables hide caption 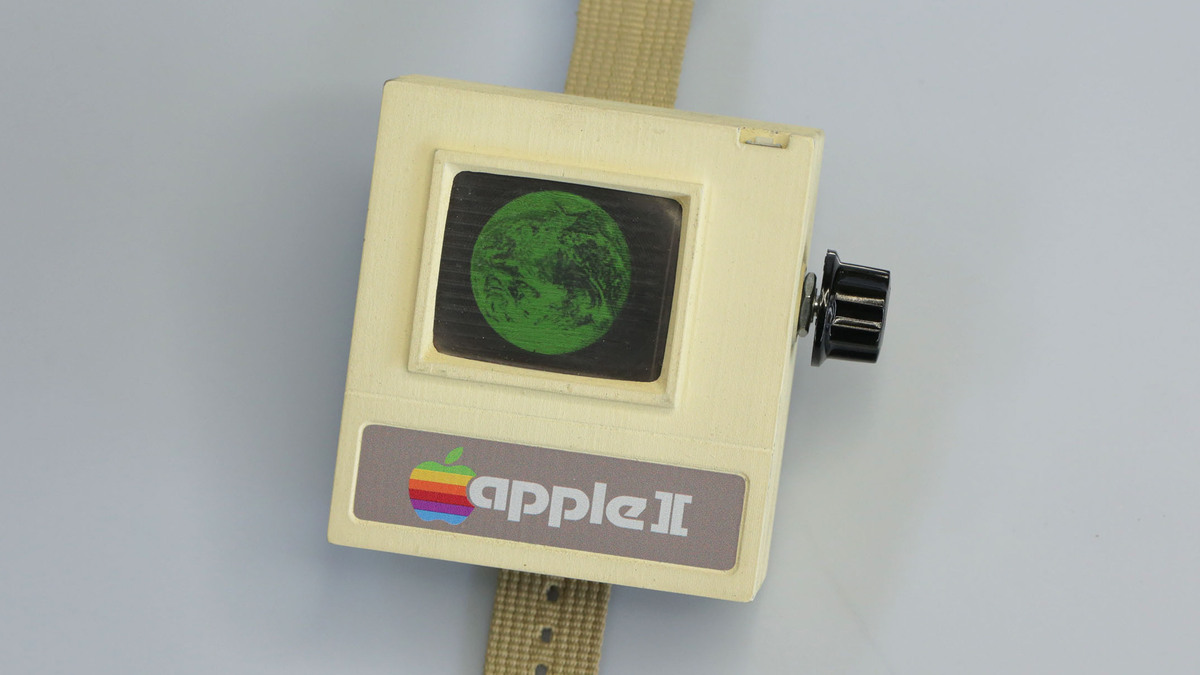 The Apple II Watch is meant to parody the Apple Watch and show what wearables might have looked like in the 1980s.

One tech nerd is bringing the '80s back, this time in wearables.

The Apple II Watch, designed by 24-year-old DJ Harrigan, is meant to parody the Apple Watch, which was released Friday, and show what wearables might have looked like in the 1980s. The design is bulky and retro, with a tan body and the rainbow Apple logo evocative of the '70s and '80s.

Harrigan works for Instructables, a do-it-yourself site where people can upload instructions on how to make various projects. It's no coincidence the watch appeared on the DIY site just before the debut of the Apple Watch. Harrigan finished the design by February but wanted to wait to release it until it was more relevant.

When he set out to design the watch, Harrigan initially wanted to make it a miniature version of the computer you could wear on your wrist. Instead, he decided to just parody the interface, not the actual hardware.

"I'm a huge computer history nerd fan," he said. "And I wanted to make something that sort of celebrated that, but also made fun of it a little bit since wearables are still kind of this new awkward thing. I just really wanted to imagine what an equivalent would be in the 1980s because it's such an iconic computer for a lot of people."

When you start the watch up, the screen fills with brackets, just like an original Apple II. Using the knob on the side, you scroll through a menu featuring several options. But clicking on "weather," for example, only shows an image of the Earth. The watch can tell you the time, but beyond that it doesn't do much. To make it more functional, Harrigan would have spent much more time on the project, he said.

For electronics and the 3-D-printed parts, the total cost of the project is about $200, he said.

Harrigan put the directions for how to make it on Instructables. People have asked him if he'll sell the watches, but he said he won't for a few reasons. First, he loves his job and doesn't have time to make these for everyone interested. Also, the watch is a parody but it still resembles an Apple product, and he didn't want to step on Apple's toes, he said. 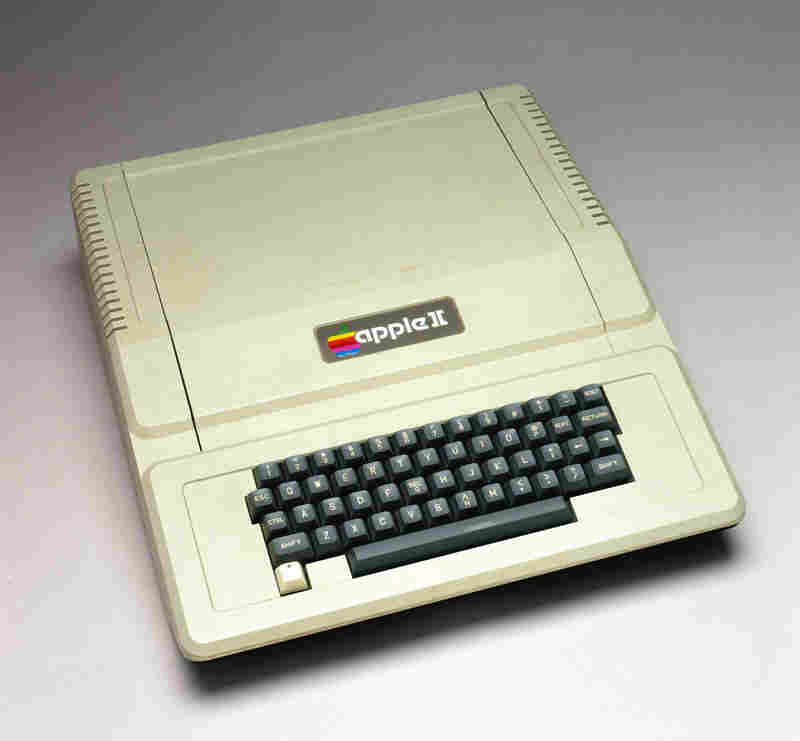 The Apple II, also known as the Apple ][, was introduced in 1977 and helped kick off the personal computer boom. UIG/Landov hide caption 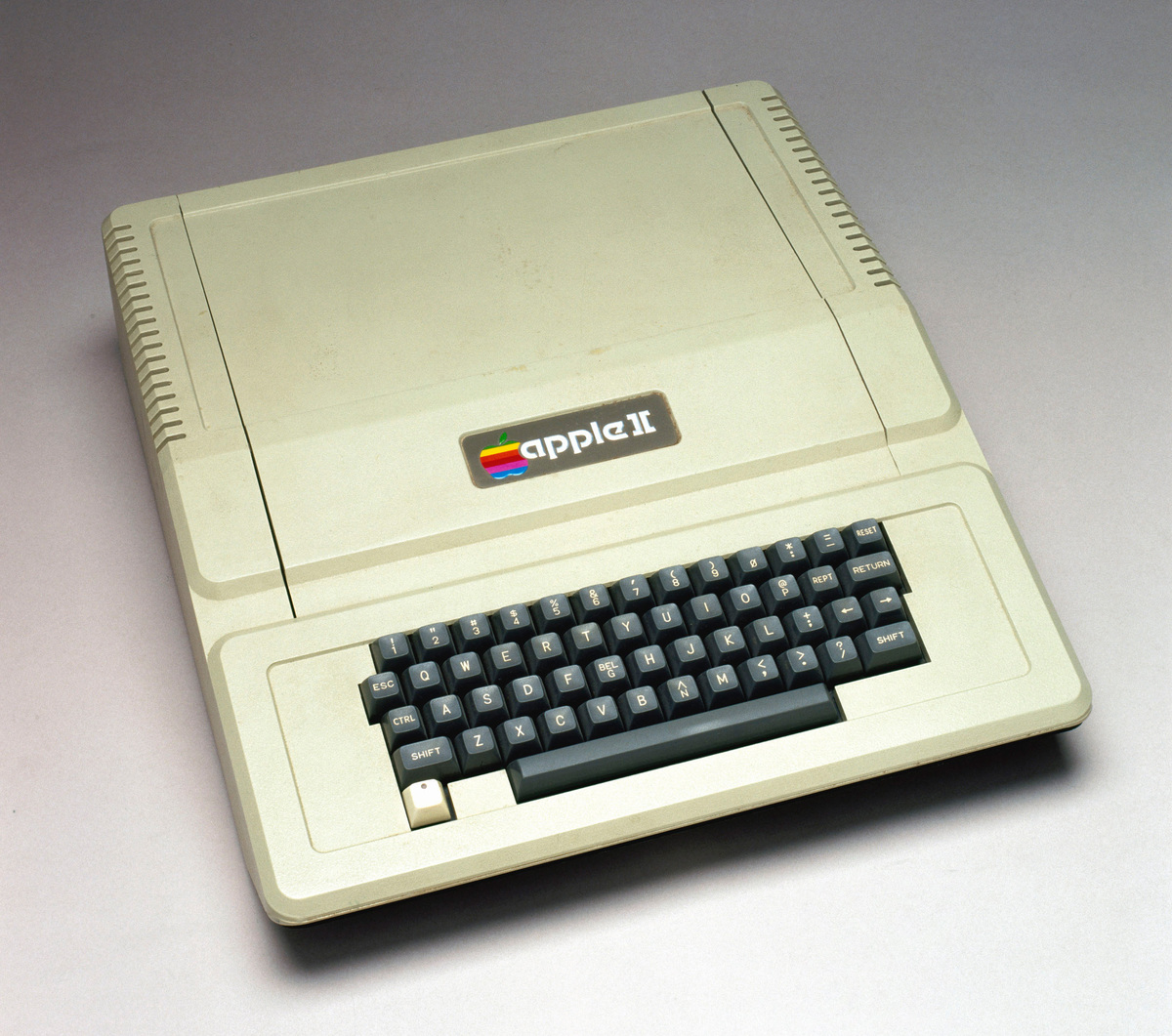 The Apple II, also known as the Apple ][, was introduced in 1977 and helped kick off the personal computer boom.

Apple hasn't commented on the watch, but Steve Wozniak, the designer of the Apple II computer, commented on the Instructables page: "This is incredible and has great significance to the maker community. I would buy this over the Apple watch and would wear it too! It would go well with my nixie watch," he wrote.

Harrigan said he was blown away that Wozniak commented.

"This [the original Apple II] is something he spent thousands of hours on, so it really overwhelmed me that he would go out of his way to compliment me on that," he said.

Harrigan doesn't actually wear the watch. In fact, he doesn't wear a watch at all. He thought about buying a smartwatch, but said he has a few issues with them. The battery life is a concern, and so is having another screen to distract him.

"I enjoy making technology, but I definitely want to minimize it in my daily interactions," he said.

The design includes several stickers to help make it look more like the original computer, and it even includes two tiny, mock floppy disks. Harrigan considered adding some kind of magnetic storage for the watch, but again it came down to time.

Several commenters have expressed interest in making the watch, and one commenter, Damian Peckett, has already started trying to figure out how to make the watch run an Apple II emulator, which would allow the watch to run software originally used in the Apple II computer. He's also working on a better battery.

Peckett said he hopes to be wearing something inspired by Harrigan's project soon.