Accessibility links
How Tech Firms Are Helping People In The Nepal Earthquake Zone : All Tech Considered Tech and telecom companies stepped up with much needed services. Facebook and Google offered tools to help those in the region let family and friends know they're OK. Other firms cut calling costs. 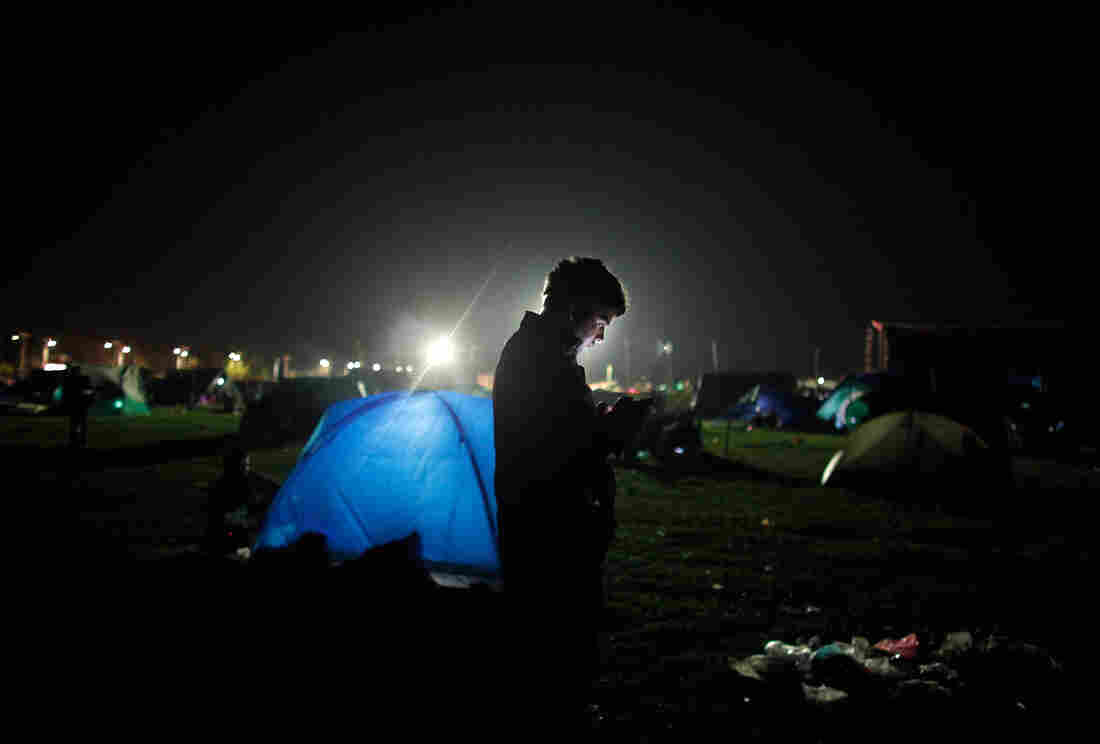 A Nepalese man checks his cellphone as people stay on open ground from fears of earthquake tremors in Kathmandu, Nepal, on Monday. Niranjan Shrestha/AP hide caption 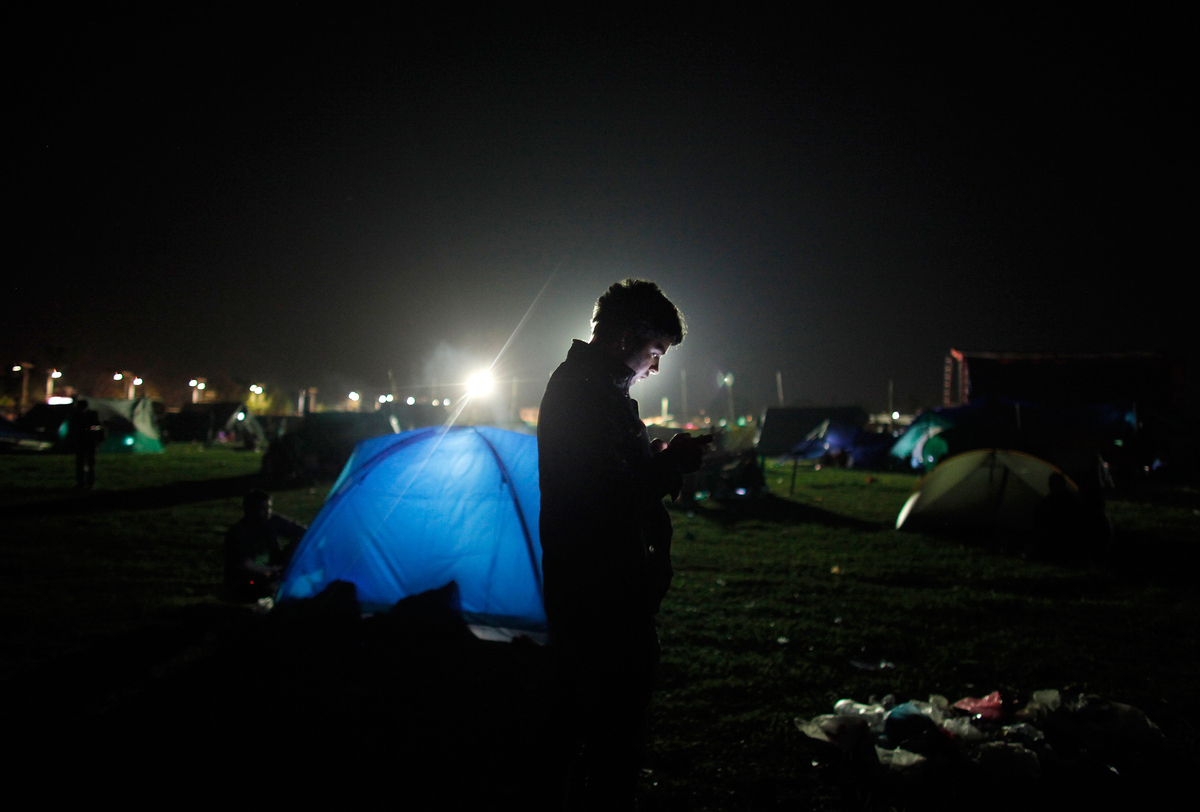 A Nepalese man checks his cellphone as people stay on open ground from fears of earthquake tremors in Kathmandu, Nepal, on Monday.

The feeling that tech giants such as Facebook and Google know exactly where we are and what we're doing can be uncomfortable. Targeted advertisements or suggestions based on our location can feel like an invasion of privacy.

But the collection of our digital data has an upside in certain circumstances, and the aftermath of the massive earthquake in Nepal provides a good example.

As the nation struggles to deal with the devastation of a magnitude 7.8 earthquake that has left more than 4,000 people dead, information about survivors, those still in danger and what resources are needed is in high demand. Tech and telecom companies are stepping up to offer much needed services. From Apple to Viber, each has something a little bit different to offer.

LOOK: Historic Nepal Sites Before And After The Quake

Here's an overview of the ways in which tech companies are leveraging their power, and some of the challenges they are facing.

Apple has activated an iTunes Store feature that allows visitors to donate to the American Red Cross using the credit card information Apple has on file. Apple has enabled one-click donation following other natural disasters such as the 2010 earthquake in Haiti, the 2011 tsunami in Japan and the 2013 typhoon in the Philippines.

we poop on Facebook a lot here but this is super useful pic.twitter.com/5VSbPgo4uV

Of course, there are other ways to help those in need. You can find a list of some of the charities doing relief work in Nepal here.

Facebook: In October, after noticing how users organically turn to Facebook in times of crisis, the company launched "Safety Check." The site uses the city listed in your profile and data on where you've accessed the Internet from to determine whether you may be affected by a natural disaster. If so, Facebook sends a push notification asking if you're safe. When you confirm your safety, your friends receive a notification as well.

In the case of the Nepal earthquake Facebook activated Safety Check for Nepal and surrounding areas on Saturday. Mark Zuckerberg announced the service on his Facebook page. "It's moments like this that being able to connect really matters," the Facebook founder said in his post.

The feature has garnered praise, but it faces challenges associated with the availability (or lack thereof) of Internet access. The World Bank says that just 13 percent of Nepal's population accesses the Internet regularly, and the Los Angeles Times has reported that current connectivity in Kathmandu is tenuous.

Google also has a service designed to help you know whether friends and family are OK — it's called "Person Finder." According to Google's Asia Pacific blog, Person Finder "gives people a way to post and search for family or friends affected by the disaster." In a sense it crowdsources information about people in affected areas and in doing so collects an amazing amount of data. Through Person Finder you can create a listing for a person you're looking to get in touch with, or provide information about someone you've heard is safe. Search is available via the Web, or via SMS in Nepal, India or the United States.

Reduced cost of calls to #Nepal to 1¢/min (from 19¢/min) to help loved ones connect→ http://t.co/RjfHY8bCri @GoogleCR pic.twitter.com/fWEb70Pp8P

And Google has reduced prices for Google Voice calls into Nepal from 19 cents per minute to 1 cent per minute, and Google.org, the company's charitable arm, pledged $1 million toward disaster relief and response.

Again, both of these services depend on infrastructure that is struggling to cope with demand. NPR's Kirk Siegler, who is in Kathmandu, noted that the local phone network "has been sporadic at best."

Microsoft: On Monday afternoon Microsoft announced free Skype calls to landlines and mobiles in Nepal. Microsoft has also pledged a minimum of $1 million to recovery efforts.

In light of the tragic events in Nepal, all Skype calls to landlines & mobiles in & out of Nepal are free. More: [http://t.co/pz8PwVcCq6

AT&T, Sprint and T-Mobile: The telecom firms have waived fees for calls and text messages sent by users in Nepal. The offer lasts through May 16 and is retroactive to April 25. On the question of whether users will have the capability to call or text, Sprint notes that "it has been shown that text messages may go through when calling capabilities aren't available."

Viber: Chief Operating Officer Michael Shmilov told The Wall Street Journal that the voice and messaging app has approximately 3 million users in the Himalayan region. The company announced it would make calls for users in Nepal free to any destination.

Tajha Chappellet-Lanier is the social media intern at NPR.