Accessibility links
Why California Farmers Are Conflicted About Using Less Water : All Tech Considered Cities in California have been ordered to cut water use. Farms have not, yet. Inside the industry, there's a quiet debate: Does it makes sense to invest in water-conserving tech now — or later? 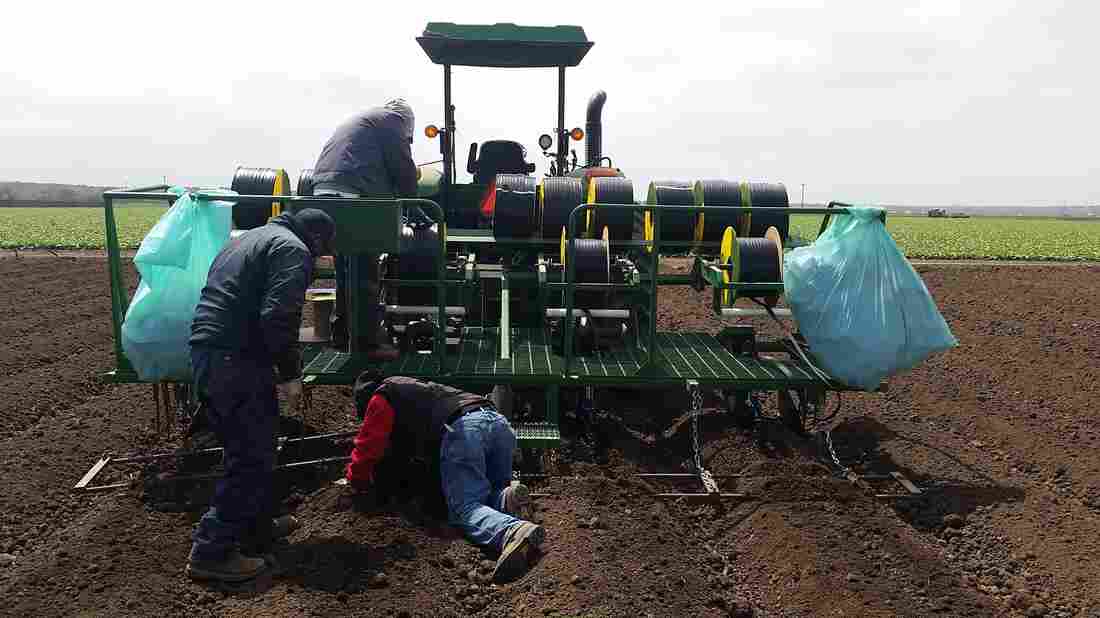 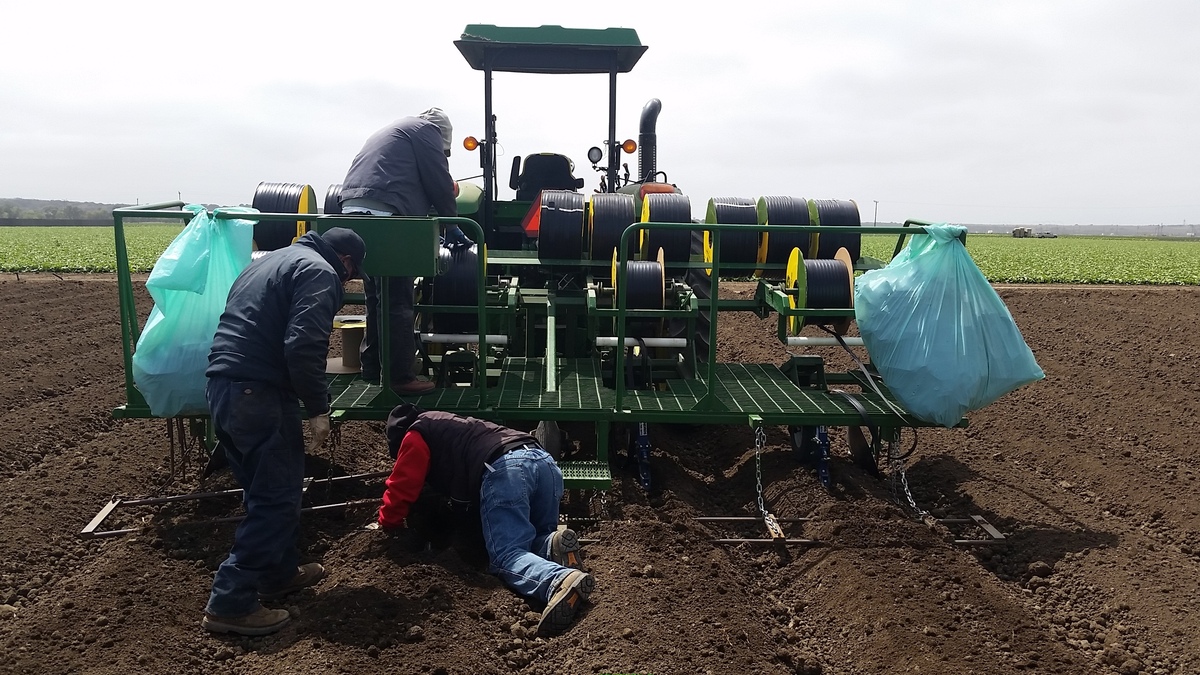 The drought across much of the Western U.S. is now in its fourth year. In California — where it's the most intense — farms are not under the same strict orders to conserve as cities are.

And inside the agriculture industry, farmers are quietly debating how best to respond to the drought. Given uncertainty around pending state regulations, some say there may be an incentive to not invest in water-saving technologies right now.

In the world of water conservation, there are a few no-brainer solutions. Take drip irrigation.

In the Salinas Valley — known as the Salad Bowl of the World — a big green, creaky tractor rolls over the acres of empty fields. It's not planting seeds. It's laying down a long thin rubber tube — called drip tape.

Michael Antle, farm manager with Tanimura & Antle, points to the levers that pull the tape, like a sewing machine pulls thread from a wheel, and inject it into the ground. "The weight of the soil on top of the tape holds it in," he explains.

Drip irrigation is not new tech; it's just tried and true tech. The co-founder of Antle's grandfather's farm, George Tanimura, introduced this method for lettuce decades ago. (The drip method was used as far back as 1st century B.C. China.) 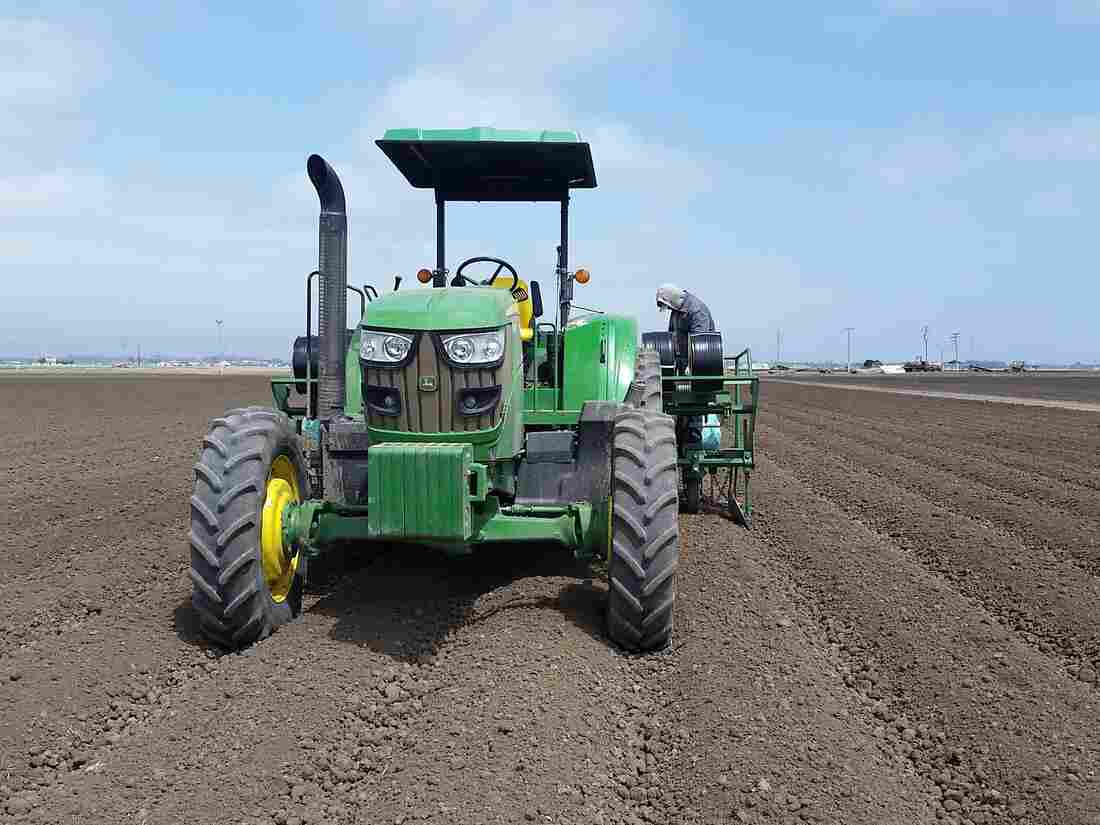 Tanimura & Antle workers use tractors to install drip tape into fields that will be used to grow lettuce and other crops in California's Salinas Valley. Aarti Shahani/NPR hide caption 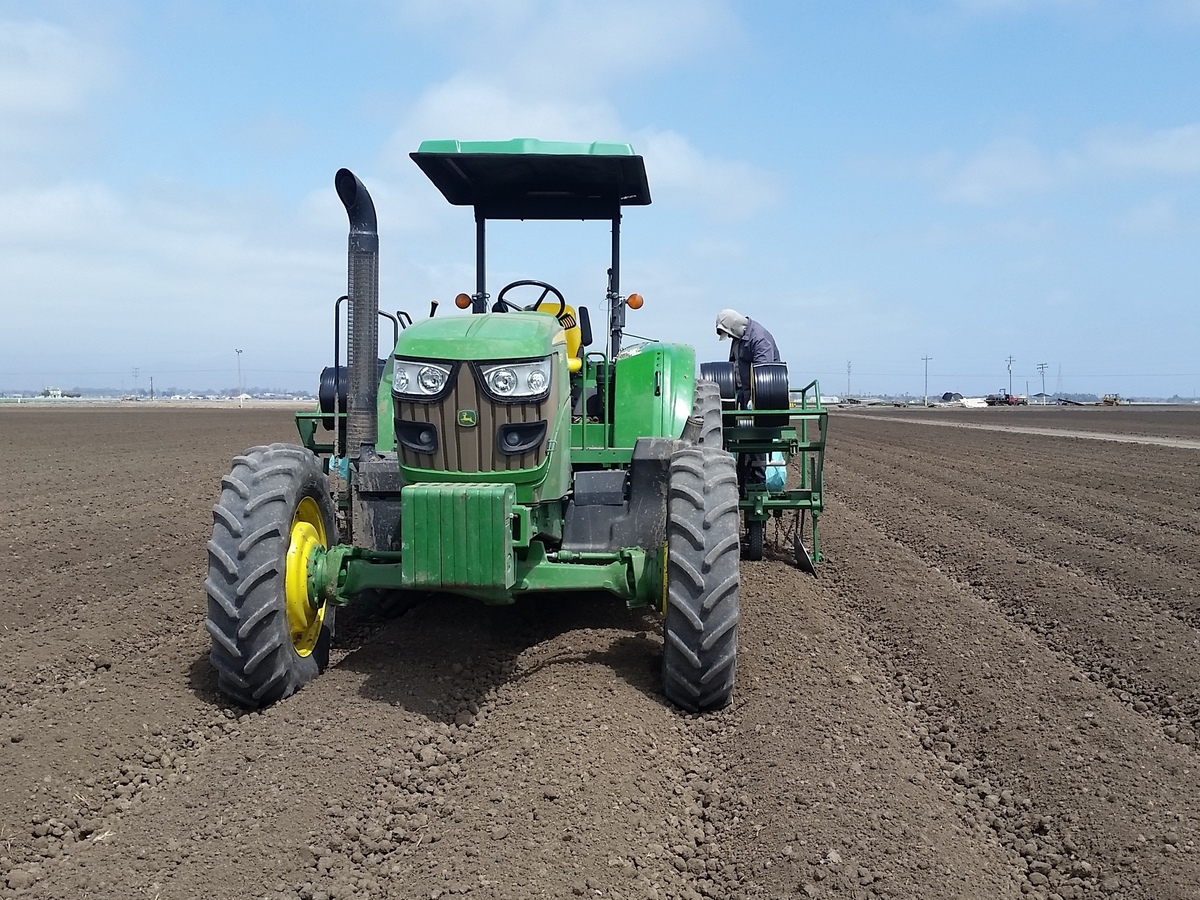 Tanimura & Antle workers use tractors to install drip tape into fields that will be used to grow lettuce and other crops in California's Salinas Valley.

The tape has little slits. Turn on the faucet and water seeps out, gradually, close to the seeds. It's the farmer's version of a low-flow toilet — and a nice way to save water in windy Salinas Valley.

Scott Rossi, another manager here, says regular sprinklers are constantly missing their mark in this wind. "It's blowing pretty good, I'd say 12 miles an hour," he says. "We're pretty much slaves to the weather."

Why Food Companies Should Be More Afraid Of Water Scarcity

Tanimura & Antle uses drip in nearly all its fields. But about 40 percent of farmland in Salinas doesn't do any drip irrigation at all, according to the Monterey County Farm Bureau. And a recent statewide survey found that farmland using drip (and another water-conserving technique called micro-irrigation) increased by just 5 percent in the decade ended in 2010.

Rossi says many farmers have decided to drill instead of drip — to go deeper into their wells, even if it hurts the overall supply of groundwater — because in the short term it's cheaper. That bugs him.

"You're saving, and then your neighbor's well next door to you is pumping and there's the sprinkler again," Rossi says. "But they'll follow suit here soon or they're gonna have to follow suit soon."

Incentive To Not Conserve

What farms will have to do is actually a matter of huge debate — and some say there is an incentive to not conserve.

As part of the implementation of California's 2014 Sustainable Groundwater Management Act, new agencies are being formed across California to set baselines. Norm Groot, director of the Monterey County Farm Bureau, says many farmers fear if they take less groundwater now, the baselines set for them will be smaller.

It's that economics problem, game theory. In a zero-sum game, where there's only so much to go around, you don't want to lose your piece of the pie.

Groot adds that farms have already taken steps to conserve, investing in drip irrigation where it's practicable for the crops being grown, installing soil moisture sensors, and even using weather station data to determine when a plant is most receptive to watering.

While giant farms like Tanimura & Antle can afford to lose a crop because of reduced water supplies, Groot says the small, family-owned farms will shut down. So they're fighting for survival. "What choice do they have but to say, 'No, don't take my water, because it takes water to grow my crops'?"

Local optimists say one choice is to make the pie bigger.

At a water recycling plant in Monterey County, Gary Petersen, the head of public works for the city of Salinas, explains how sewer water is purified into a source that isn't quite potable, but can be used for crops.

Last year, his team realized it could take the water used to wash lettuce in the factories — hundreds of millions of gallons — and divert it here, to be recycled. Otherwise, it was just going into a pool that evaporated.

Petersen says while water from the operation can't feed an entire valley, it matters because the farmers, who often work on their own, joined hands to make it happen.

"What we're seeing, especially with the continued drought, is that if we don't get together on this, there's going to be some really big losers," he says.