Accessibility links
Some Google Street View Cars Now Track Pollution Levels : All Tech Considered Google's already tested three of the pollution-sensor equipped cars in Denver, and is currently trying them out in the Bay Area. 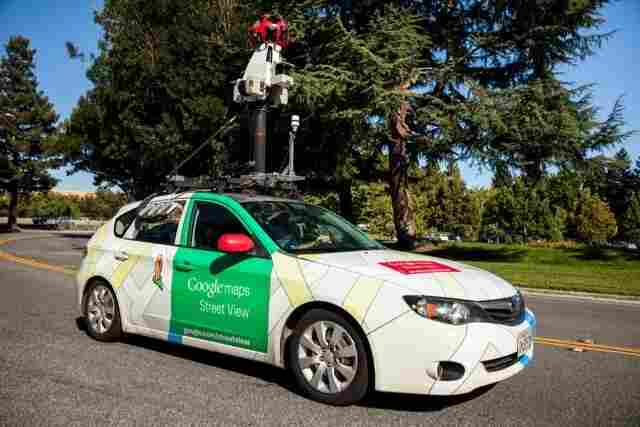 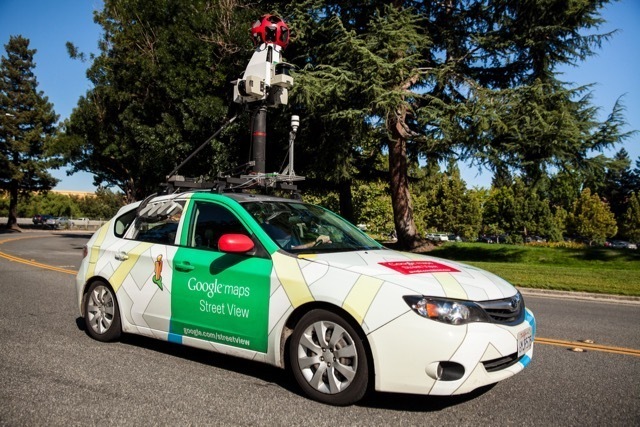 For years, Google has had eyes in neighborhoods across the world: Google Street View cars armed with cameras, lasers, and GPS devices to filter "360-degree panoramic views" and "locations on all seven continents" to Google Maps.

Now, on top of having eyes, Google's got a nose. It has partnered with Aclima, a company that designs environmental sensor networks, to equip some Google Street View cars with equipment that allows them to track air pollution in real time. The technology will allow the cars to monitor levels of several pollutants: nitrogen dioxide, nitric oxide, ozone, carbon monoxide, carbon dioxide, methane, black carbon, particulate matter, and Volatile Organic Compounds (VOCs).

The Aclima-Google partnership had a test run last year in Denver. Aclima says that experiment clocked 750 hours of drive time and gathered 150 million data points, with just three cars. A new trial has already begun in the Bay Area. That one should wrap up this fall.

"We are for the first time able to really take a city scale snapshot of pollution," Aclima CEO Davida Herzl told NPR. "The existing way that we understand air quality in cities is through government-mandated monitoring stations. But those monitoring stations are sparsely distributed in cities. So we understand kind of what's happening at a regional level, but we don't really understand how pollution moves through a city, how it differs block by block, street by street. ... You can think of it like a photograph with a few pixels. With the partnership with Google, we're now able to fill in those pixels."

The sensor devices, or "mini-mobile labs" as Herzl calls them, fit in the back of the Google Street View cars, and the air samples make it to those sensors from a hole in one of the car windows, through a series of tubes "that look like a jumbo straw." The cars also have small anemometers on the outside that can track temperature and wind flow, among other meteorologic measurements. "It's kind of like we've given the cars a nose," Herzl says.

Google says it's been working with Aclima for years, previously on devices to track pollution within Google buildings. And, Google began working with the Environmental Defense Fund last year, to start tracking methane pollution from underground pipelines. 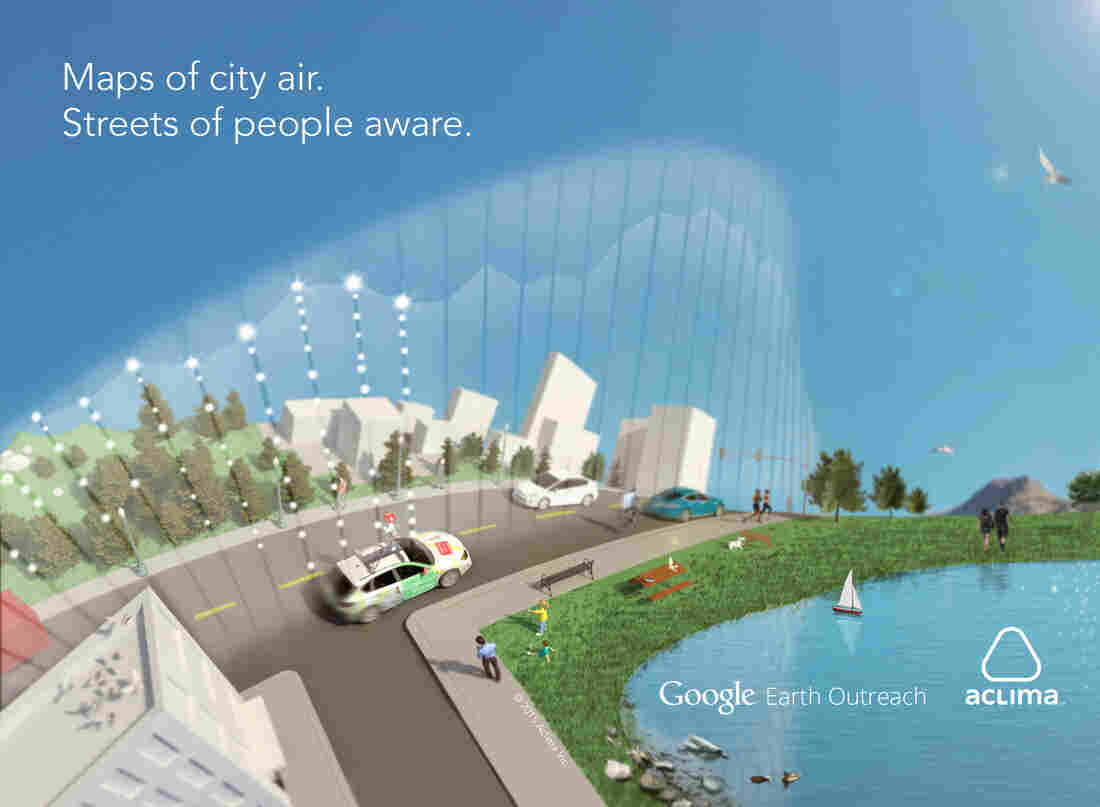 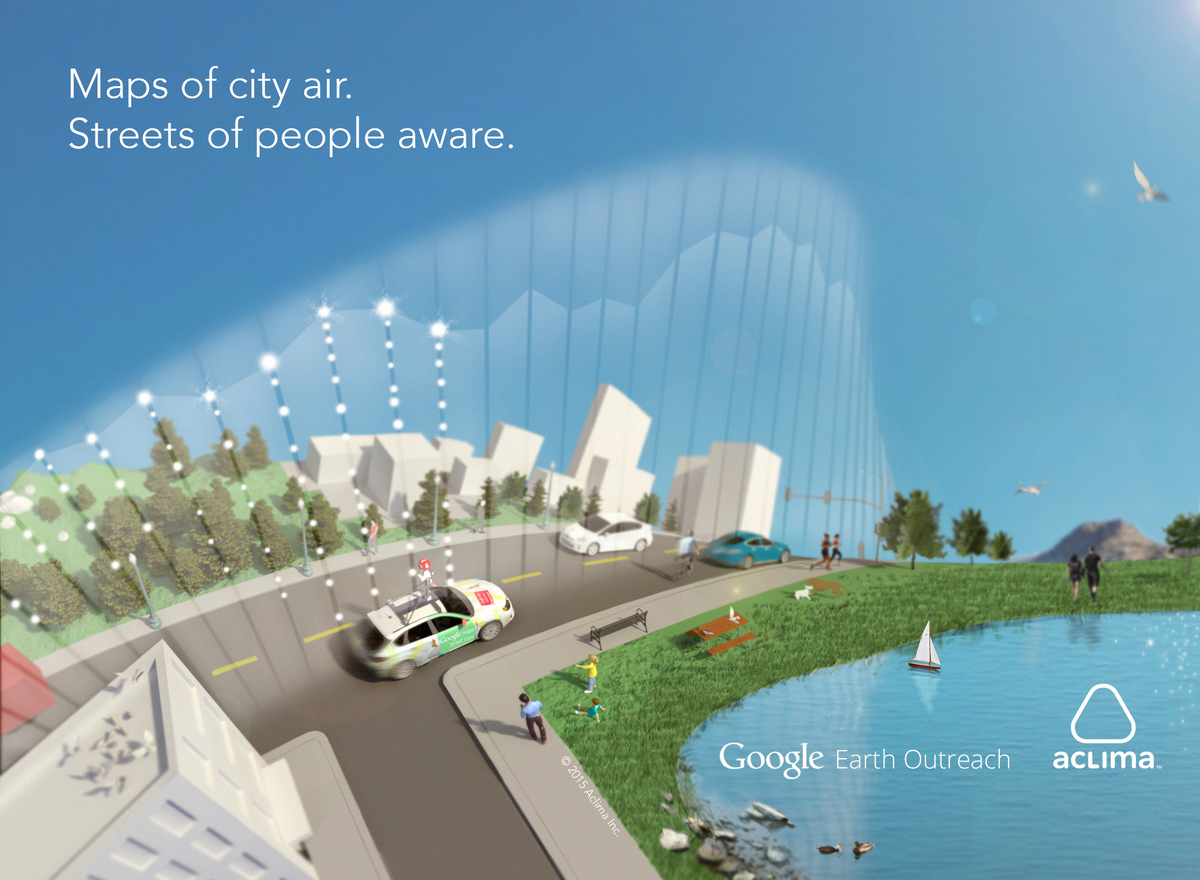 A rendering of how pollution-sensor equipped Google Street View cars "see the air."

The pollution data gathered is being stored in the cloud by Google, and Aclima has already begun sifting through some of that data and publishing some of their findings. Tuxen-Bettman says that right now, Google isn't publishing any of the data itself, but one day, it might. "In the future, yes, Google Earth Engine, Google Earth, and other tools will be used so that all sorts of people can access it [the pollutant data] in different ways." Aclima says its goal is to make the data available to the public as well.

Whenever there are stories about Google and data, there are questions about just how much data the company is collecting, who can see it, and whether it's being put to good use. You could wonder: If Google Street View cars now have "eyes" and "noses," what else do they have?

When asked about some of those privacy concerns people might have, Tuxen-Bettman said right now the Google Street View cars equipped with pollution sensors are only taking panoramic views for Google Maps and tracking pollution. "Air quality, right now, that's the only kind of additional experimentation that we're doing [with the Google Street View cars]. Obviously we're exploring what kind of pollutants we could potentially add.

"We understand that a lot of people will have different opinions," she said, "but our intention is that if we provide accurate and useful information about our air, it's gonna do much more good than harm, meaning that the benefits are far going to outweigh any cons. We're excited to finally make the invisible visible."