Accessibility links
In Michigan, A Testing Ground For A Future Of Driverless Cars : All Tech Considered Automakers and researchers are using a 32-acre fake city at the University of Michigan to simulate a real-world environment for autonomous vehicles. How will such cars affect urban planning? 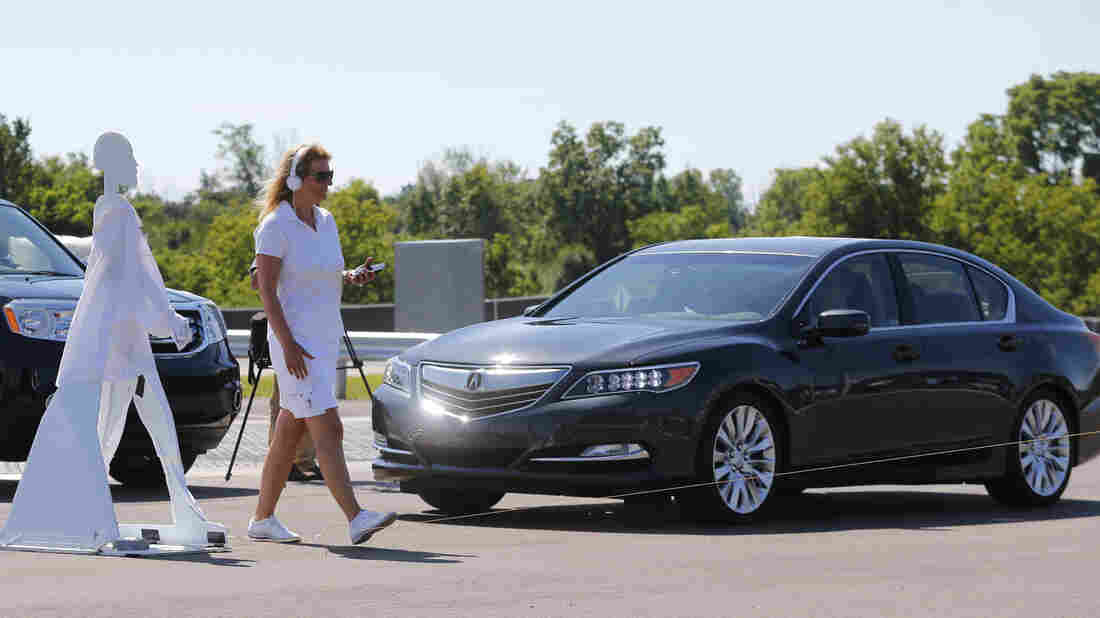 A pedestrian crosses in front of a vehicle as part of a demonstration at Mcity on July 20, on the University of Michigan campus in Ann Arbor, Mich. Paul Sancya/AP hide caption 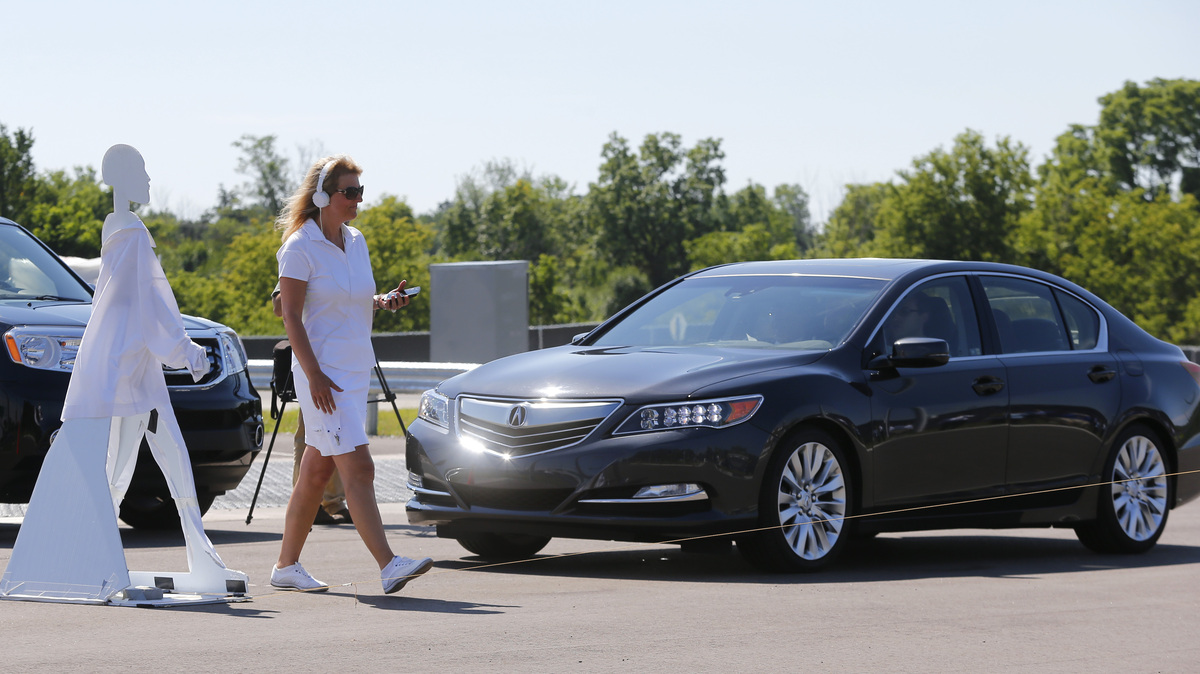 A pedestrian crosses in front of a vehicle as part of a demonstration at Mcity on July 20, on the University of Michigan campus in Ann Arbor, Mich.

When engineers at Ford want to see how a new car handles, they take it to a large track with loops and straightaways. But that traditional testing ground isn't much help to Randy Visintainer, director of Ford's autonomous vehicles program.

"For an autonomous vehicle, what you really want to have is more of like an urban environment: buildings, blind intersections, simulation of pedestrians coming out in front of you, things like that," Visintainer says.

He's now got access to that at MCity, a 32-acre testing ground at the University of Michigan. Fifteen companies — Ford, General Motors and Nissan among them — each paid $1 million to help build the facility, where they can now do research alongside university engineers and scientists.

Out in California, Google is experimenting with its self-driving car. But it only goes 25 miles per hour and travels in areas the car's computer has studied before. And there's a driver on board, just in case. In Michigan, researchers want to see how a fully autonomous car would perform in an unpredictable world. 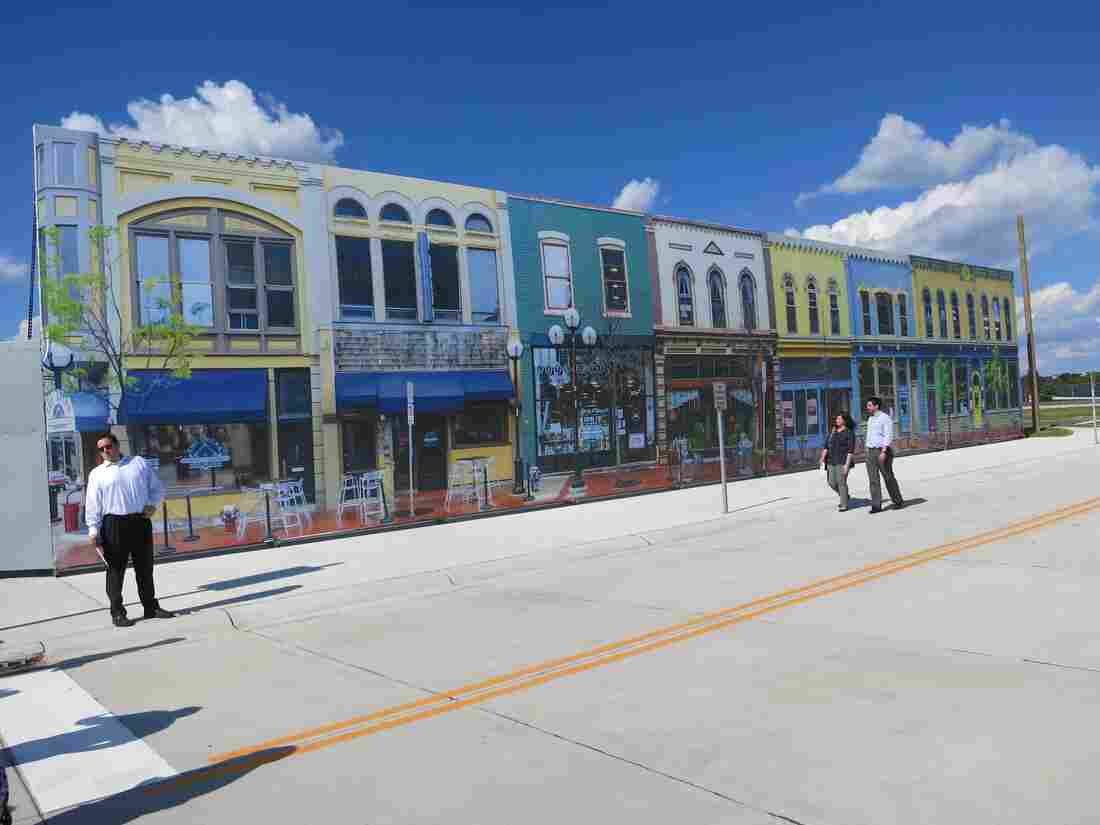 Mcity's "downtown" is actually a silk-screen recreation of a street in Ann Arbor, Mich. Researchers have built the small fake city at the University of Michigan as a testing ground for autonomous vehicles. Jason Margolis/NPR hide caption 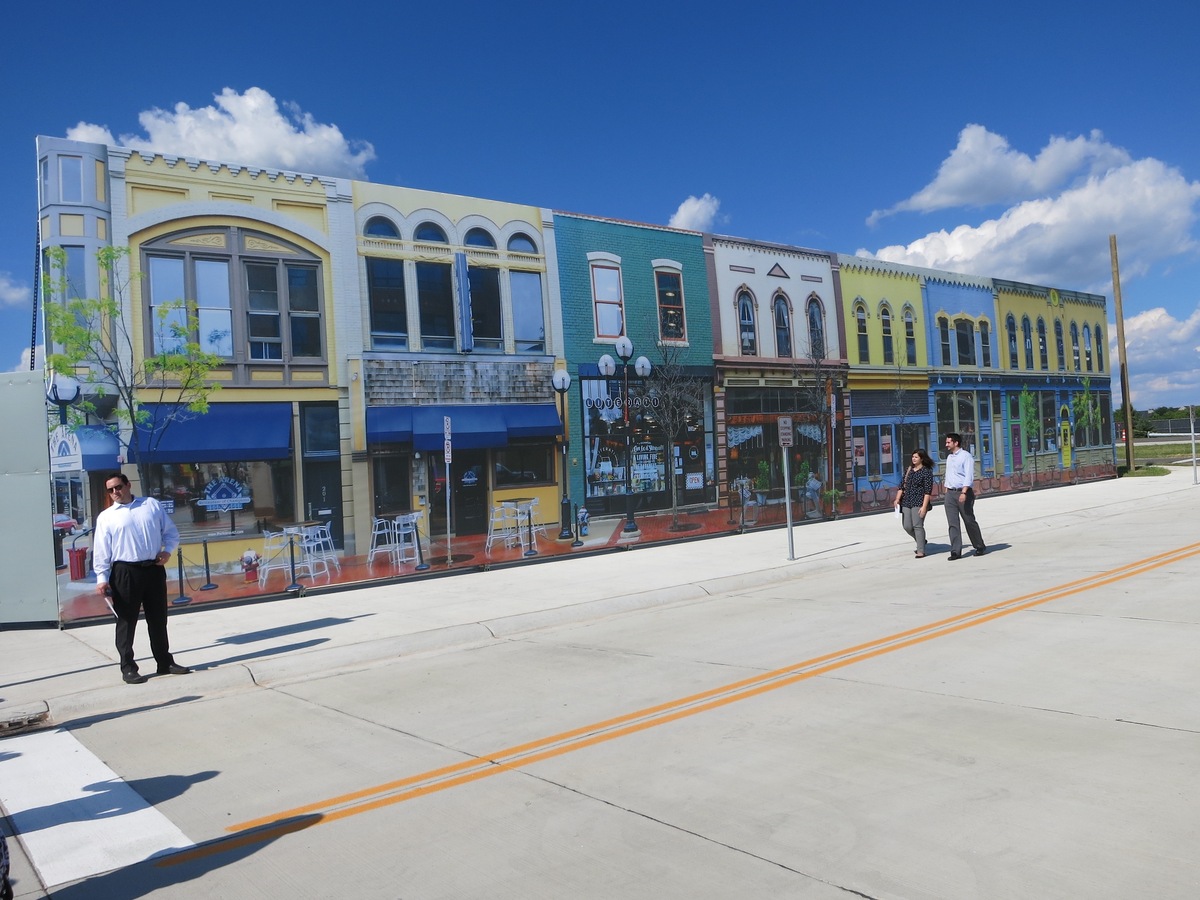 Mcity's "downtown" is actually a silk-screen recreation of a street in Ann Arbor, Mich. Researchers have built the small fake city at the University of Michigan as a testing ground for autonomous vehicles.

Hundreds of people have been coming for tours of the new fake city, complete with a mock-up of streets in downtown Ann Arbor, highway on-ramps, a railroad crossing — even a simulated forest canopy to block GPS signals. And other curve balls like a stop sign tagged with graffiti and a small grated bridge.

"It's the kind of thing you would drive on in a car and not even think twice about it, but if you're an automated vehicle, something like that looks very scary," says engineer Dillon Funkhouser with the University of Michigan Transportation Research Institute, who was giving a tour.

Autonomous cars sense the world around them with GPS, radar and a laser technology called Lidar.

"Lidar uses light that reflects off of objects, and the rate at which that light returns can basically create a three-dimensional image of the world around it," explains research scientist Jim Sayer, also with the University's Transportation Research Institute.

The university's urban planners are also studying the policy implications of a driverless future. The technology is rapidly advancing, but it still could take years, perhaps decades, before fully automated cars can drive us around.

"So one possibility is a driverless car in every garage. Instead of me driving my car, my car drives me," says University of Michigan urban planner Jonathan Levine.

That could dramatically improve road safety and allow for increased mobility in an aging society, but with some red flags. If we can sleep or read in our cars, we may be less opposed to spending more time commuting.

"I might say, 'You know what, I'd like to get a decent house and the houses close in, gosh, they're so expensive.' Now I can get a house very, very far out. Another possibility is I'm headed to an area of constrained parking. Rather than search for a parking spot, I set my car to circulate," Levine says.

In short, a driverless world could become a traffic nightmare.

Levine envisions a second scenario, one where self-driving cars operate like taxis, or buses that don't require set routes. In that scenario congestion could ease and it could open up valuable downtown property that's currently used for parking. But, under that scenario, we'd also have to give up some convenience and autonomy.

Levine says the new Mcity creates a reasonably complex environment, but it just can't test autonomous cars in all facets of urban life. After all, Mcity has no people. Or rather, it has one resident, a 5-foot-8-inch mechanized robot pedestrian named Sebastian.

"He does a scissor walk, so he doesn't bend at the knees. But he does have articulating arms that swing with his gait," Sayer says.

Within perhaps six years, university researchers hope to have 20 to 30 fully automated vehicles in the real Ann Arbor for the next phase of testing.