Accessibility links
We Need 2 Talk: Most Teens Still Start, End Their Relationships Offline : All Tech Considered The Pew Research Center surveyed adolescents ages 13 to 17 and found social media and mobile phones are woven into teens' lives — particularly when it comes to flirting. 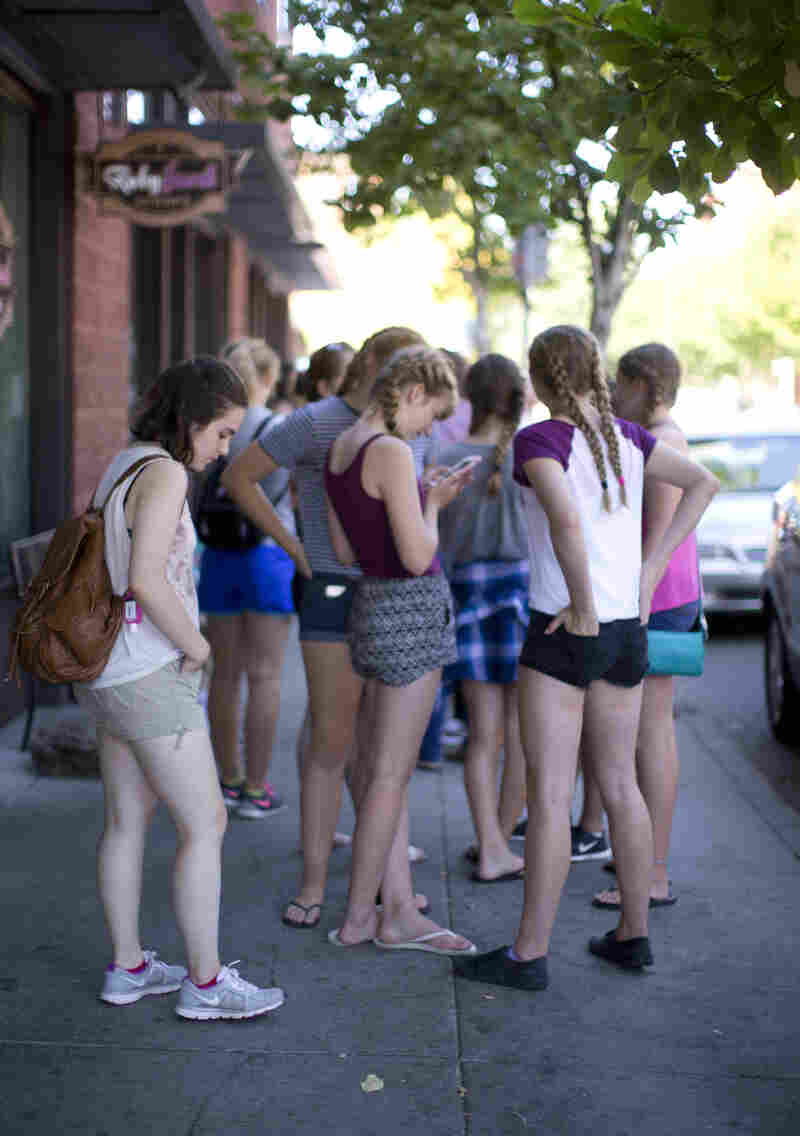 Teenage girls gather in August outside an ice cream shop in Portland, Ore. A new Pew Research Center study finds that while teens use social media and other digital tools in all aspects of their romantic relationships, most still initially meet — and break up with — their love interests face-to-face. Beth Nakamura/The Oregonian/Landov hide caption 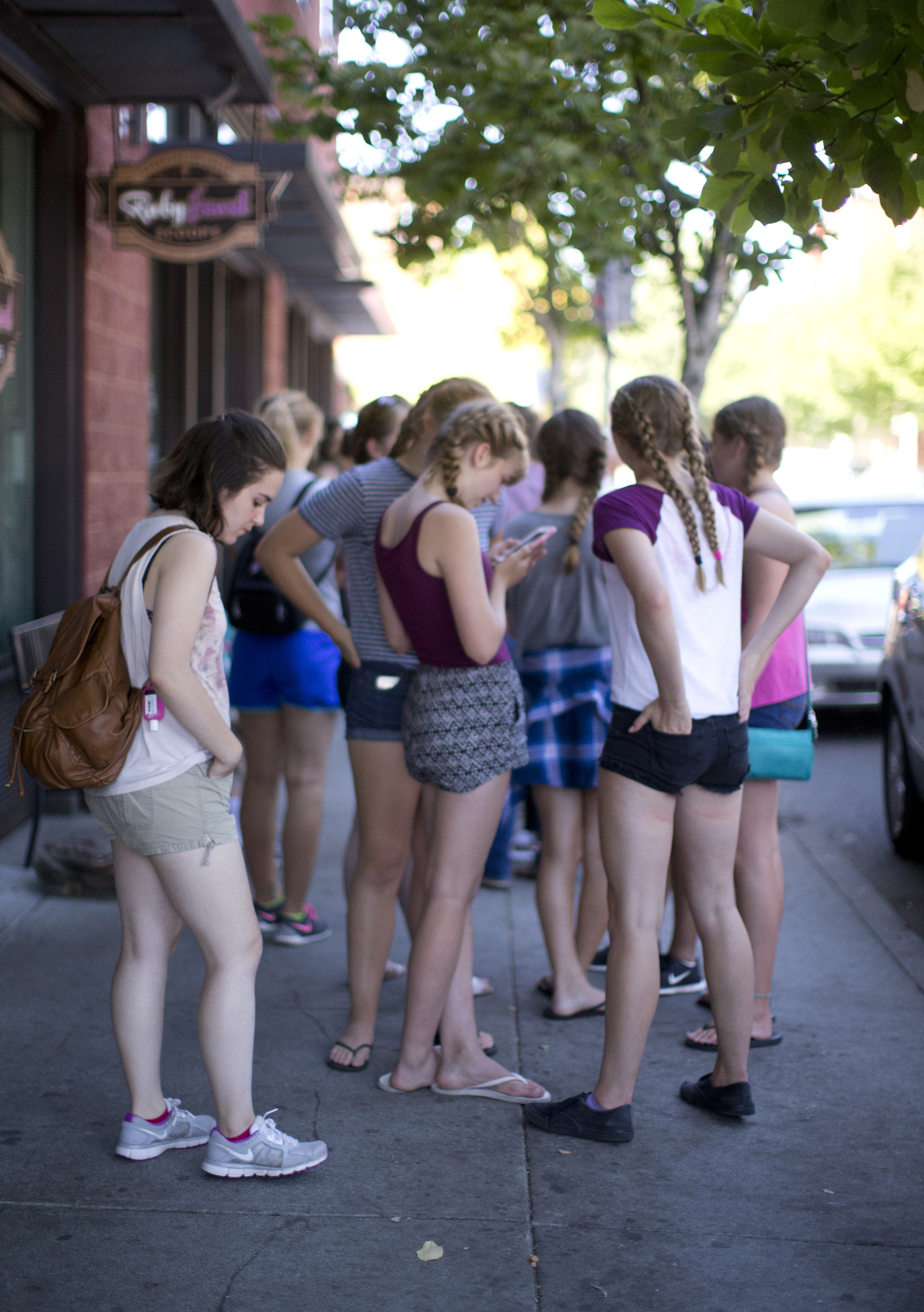 Teenage girls gather in August outside an ice cream shop in Portland, Ore. A new Pew Research Center study finds that while teens use social media and other digital tools in all aspects of their romantic relationships, most still initially meet — and break up with — their love interests face-to-face.

The Pew Research Center released a new study Thursday that examines just how much technology is embedded in the romantic relationships of teenagers. Half of the more than 1,000 teens ages 13 to 17 said they have let someone know they have feelings for them on social media sites such as Facebook, researchers found.

The study, "Teens, Technology and Romantic Relationships," finds less than a tenth (8 percent) of the teenagers who participated have met a significant other online. However, social media does play an important role in maintaining young teen romances.

Fifty-nine percent of the teens say social media helps make them feel connected to a boyfriend or girlfriend, according to the survey. And as lead researcher of the study, Amanda Lenhart, found out, emojis are vitally important.

"The hand-holding, the padlock and the heart emojis seem to be the most critical, at least in the focus groups we conducted," Lenhart said.

One item she found surprising was that, when broken down by gender, the boys were 13 percent higher than their female counterparts to say social media made them feel more attached to the person they were dating (65 percent to 52 percent, respectively).

"Boys told us that they found that they felt more connected to their partners through social media than girls did. They are more likely to say they felt an increased emotional connection and a connection in general to the workings of their partner's lives," Lenhart said.

And of course social media is a "major vehicle" when it comes to flirting.

Forty-seven percent of the study participants have flirted or expressed interest in someone by liking or commenting on someone's social media posts.

While most had Facebook pages, Lenhart found that when it comes to flirting or maintaining relationships, this was not teens' preferred social media site to go to — after all (duh!) their moms are all on Facebook too.

Teenagers tend to go to "visually oriented" sites like Snapchat and Instagram, according to Lenhart, because they offer more privacy and control over who sees their posts.

So what happens when the relationship sours?

Pew researchers found that breakups are typically done the old-fashioned way — in person. Of the 35 percent of the teens who have dating experience, about three-fifths have broken up with someone in person. And nearly half (47 percent) have been broken up with in a face-to-face discussion.

"That's the most socially acceptable way to break up with somebody," Lenhart says. "It's not considered to be particularly acceptable to dump somebody on a text, but a lot of people [27 percent] do it."

And of course once it's over, the "pruning" or deleting of pictures, blocking of exes and changing of social media profiles ensues.

"Social media are being used far less often in nefarious ways in adolescents' romantic lives than I think a lot of adults worry about," says Temple University psychology professor Laurence Steinberg. "I think that most of what kids use social media for in this aspect of their life is ... not unlike the way people in previous generations used the telephone."

Steinberg, who is the author of Age of Opportunity: Lessons from the New Science of Adolescence, also says the study should ease parents' angst about what their teens are doing online.

"A lot of adults today have unnecessary worries about the ways in which social media are disrupting adolescents' emotional development, and I think this survey suggests ... they're not the evil that many people think of them as."

In a previous version of this story, Laurence Steinberg's name was misspelled Lawrence.