Accessibility links
Even After Hanging Up, Hands-Free Isn't Risk-Free For Distracted Drivers : All Tech Considered Mental distractions can persist up to 27 seconds after using hands-free technologies, a new AAA study says. But the auto industry says voice-activated systems help drivers keep their eyes on the road. 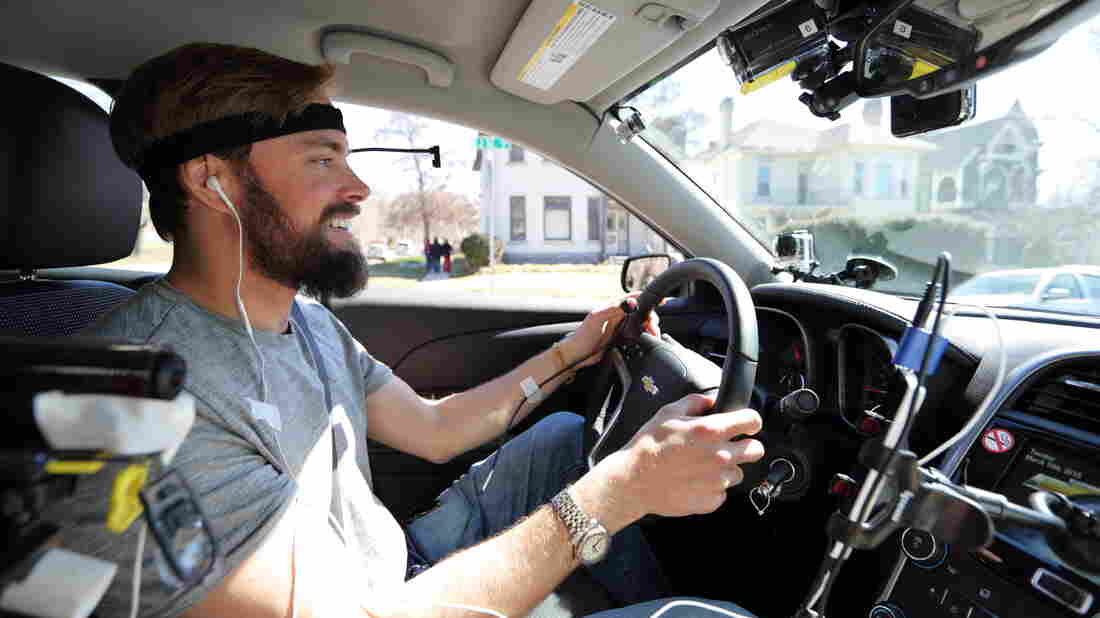 Monitored by researchers and cameras, a study participant drives while using hands-free technology. New AAA research found that these technologies are distracting even after they're used. Dan Campbell/American Automobile Association hide caption 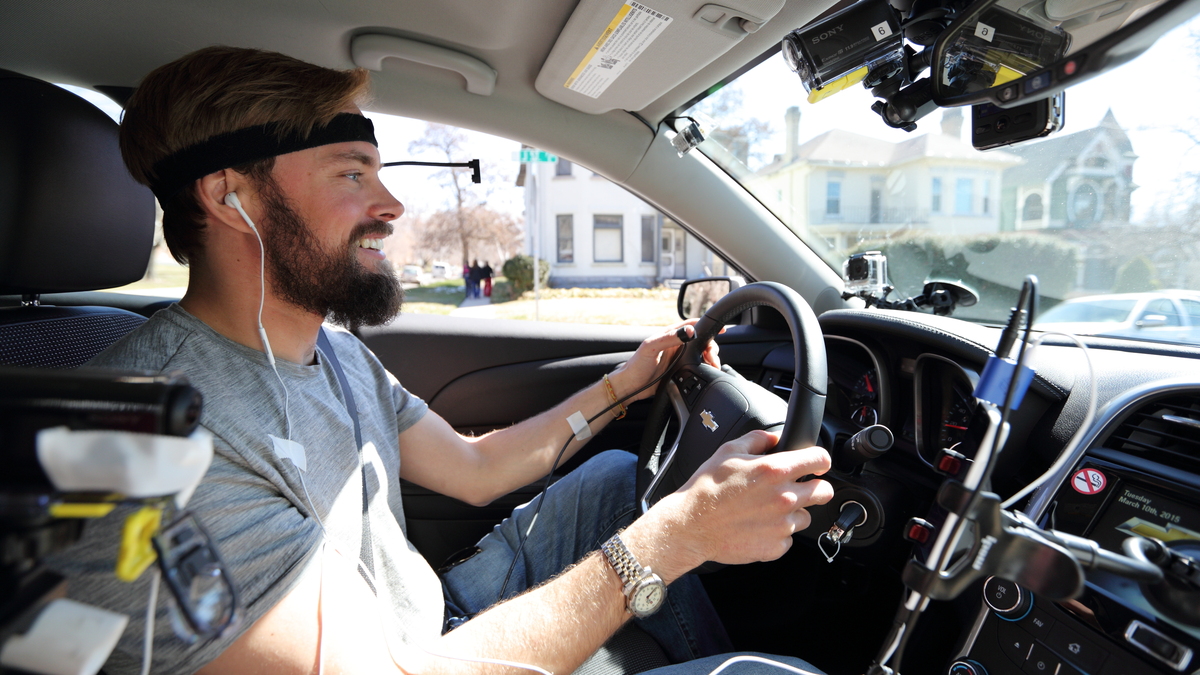 Monitored by researchers and cameras, a study participant drives while using hands-free technology. New AAA research found that these technologies are distracting even after they're used.

Updated at 10:39 a.m. ET Friday with a response from the Consumer Electronics Association.

Your hands may be on the wheel and your eyes on the road, but where is your mind?

Sending a text or emailing while driving, even with hands-free technology, can be distracting. But new research suggests that those distractions continue even once you think you've turned your attention fully back to the road.

A study from the American Automobile Association and the University of Utah found that potentially unsafe mental distractions from the use of hands-free technology can persist up to 27 seconds after using voice commands.

Motor vehicle crashes involving distracted drivers killed 3,154 people in 2013 alone. Young people are most at risk, with drivers in their 20s making up 23 percent of that group.

The results varied by vehicle and information technology operating system, but the conclusion is clear: Voice-activated systems can be distracting even when you think you're finished using them.

"The results indicate motorists could miss stop signs, pedestrians and other vehicles while the mind is readjusting to the task of driving," Peter Kissinger, president and CEO of the AAA Foundation for Traffic Safety, said in a press release.

The act of text messaging, even without using your fingers, engages areas of your brain that aren't easily shut off.

"We found that [voice-activated] models didn't work very well if it took a large number of voice-activated steps to complete a task or because only specific words would get the system to work," says Michael Green, director of AAA Public Relations.

Green says that the less the driver had to devote time and attention to get the car to do something, the safer the driver was in that car.

Potentially unsafe levels of distraction could last for as long as 27 seconds, the study finds. Traveling at 25 mph, that means that during that time, Mazda 6 drivers using the Connect in-vehicle information system traveled the length of almost three football fields.

When using the least distracting system, found in a Chevy Equinox with MyLink, drivers were impaired for more than 15 seconds after completing a voice-activated hands-free task.

And that's only at 25 mph — far slower than driving on a highway.

Distraction levels were measured on a scale from 1 to 5. Previous AAA research established that category 1 is equivalent to listening to the radio or an audiobook, a fairly passive exercise. Category 2 is about the same as talking on the phone and Category 3 is close to sending voice-activated texts on a perfect, error-free system. Category 4 veers into distraction associated with updating social media platforms while driving, and Category 5 corresponds to a specific scientific test designed to overwhelm a driver's attention.

AAA considers anything higher than Category 2 to be potentially dangerous to drivers.

While doing these tasks, participants' fields of vision, response times and task completion times were some of the factors taken into consideration. They also filled out a survey assessing the complexity and intuitiveness of their tasks.

Ten vehicles with varying voice technology systems — as well as the phone-based Google Now, Apple Siri and Microsoft Cortana — were tested. A total of 257 drivers between the ages of 21 and 70 participated in the study of 2015 model-year cars, while another 65 drivers ages 21-68 tested the three phone systems.

The technology wasn't new to drivers — a week of practice time was allotted to make sure potential distractions weren't from unfamiliarity.

In case you're worried about the dangers of this very study, don't fret. The cars were outfitted with passenger brakes, much like those used in driver's ed, to ensure the safety of all involved.

The findings can partially be attributed to imperfect systems. Subjects appear frustrated in dash camera footage when voice recognition doesn't work smoothly — attempting to correct it and glancing down at their phone screen. Repeating interruptions from systems add to the distraction, as does playing with earbud controls.

"Some systems that are highly specialized towards driving features might have fewer distractions, but smartphones can do a large number of activities, like participating in social media or buying movie tickets," Green says. "But smartphones connected in cars allow many things to drivers that they probably should not be doing."

This research comes at a time where the desire to stay connected is at an all-time high. In the past, manufacturers have said that consumers push for these kinds of features.

"We believe safety is paramount in a moving vehicle — a driver's highest priority must be maintaining safe control at all times. CEA and its members have been focusing on developing technologies that assist in auto collision avoidance — apps that restrict cell phone use while driving, navigational systems that can enhance situational awareness for drivers, and features like blind-spot and drowsiness detection. With increased public focus on curbing distracted driving, voice recognition has become a popular consumer feature. Voice recognition is indeed improving and, while there are challenges, this technology is helping drivers stay safer behind the wheel."

The Alliance Of Automobile Manufacturers, representing 12 vehicle manufacturers including GM, Toyota and Ford, wouldn't comment on specifics, saying it hadn't had the time to thoroughly review the study.

"I can tell you that we already know that voice operation allows drivers to keep their hands on the wheel and eyes on the road; two things that are critical to safe driving," spokesman Wade Newton says.

"In fact, in 2013 NHTSA released a study concluding that visual and manual distractions — such as dialing or texting on a handheld phone — increased the risks of getting into a crash by more than three times," Newton says.

The good news, AAA says, is that its research shows that it's possible to design technologies that are less distracting.

"With that in mind, we're calling on developers to make technologies easier to use, that spend less time on tasks and are more accurate," Green says. "We also want them to be more geared towards tasks associated with driving, rather than allowing someone to do something like social media while they're in their car."

Just because the technology is in your car doesn't mean you should be doing it while you're driving.