Accessibility links
The Future Of Nanotechnology And Computers So Small You Can Swallow Them : All Tech Considered How tiny can a computer get and what can it do? Digital sensors are already traveling inside human bodies. Will shrinking sizes eventually do away with the bulky devices we use now? 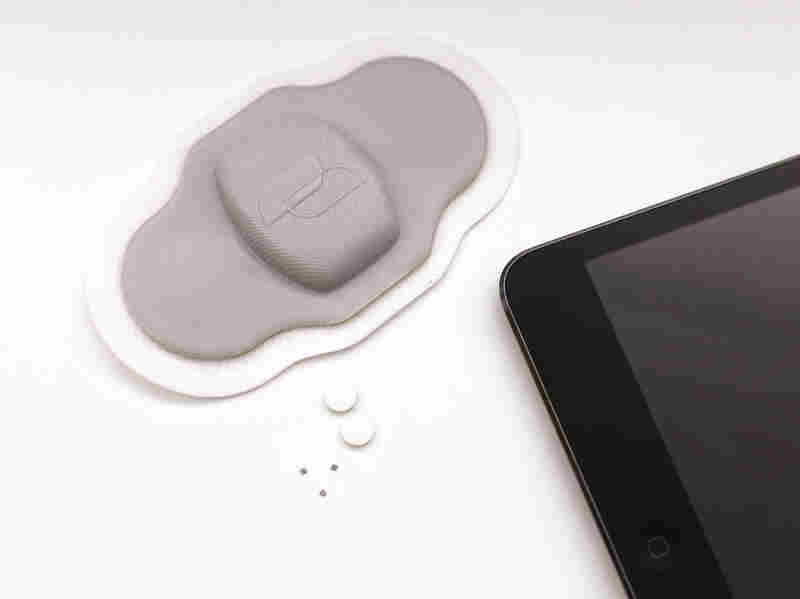 These tiny Proteus digital sensors and a wearable patch keep track of how patients take their prescribed medications. It's one example of the growing field of ingestible medical devices. Proteus Digital Health hide caption 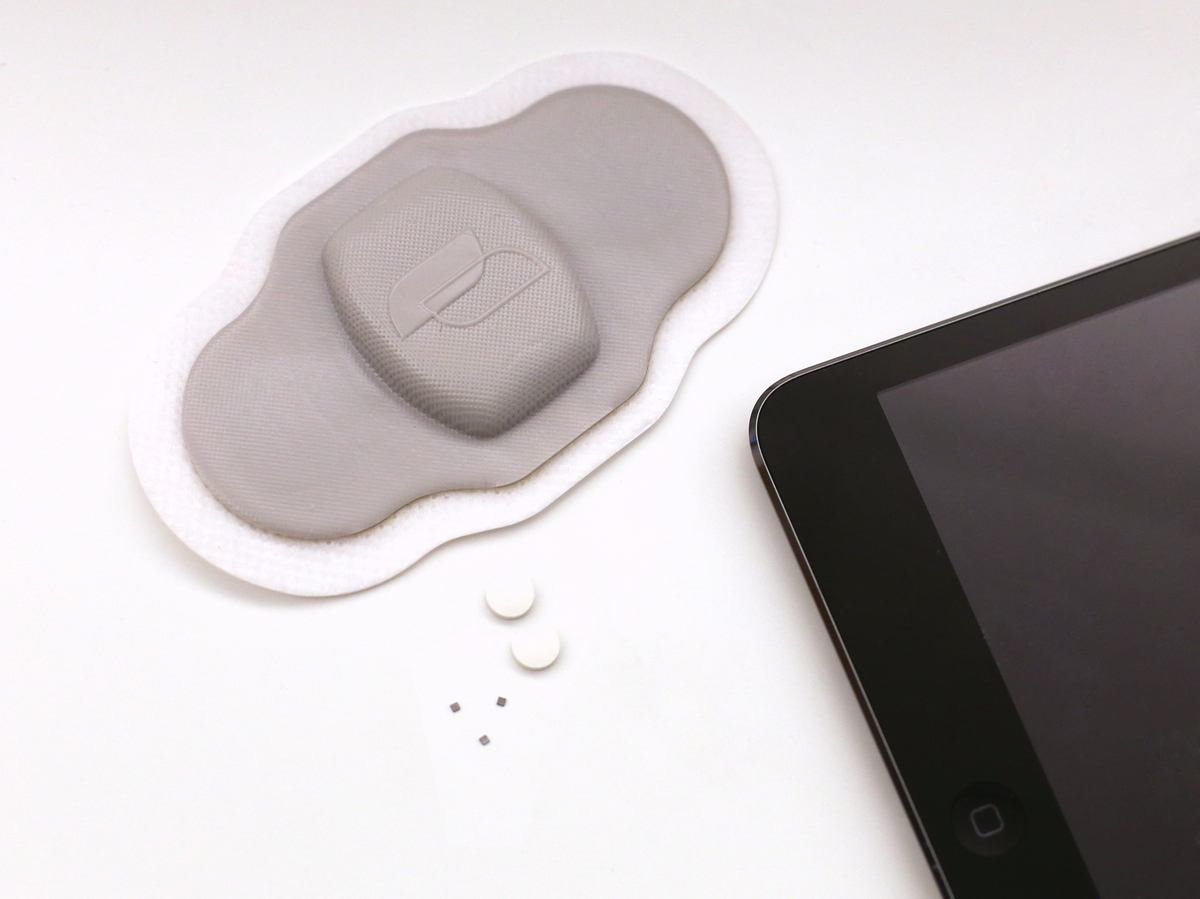 These tiny Proteus digital sensors and a wearable patch keep track of how patients take their prescribed medications. It's one example of the growing field of ingestible medical devices.

Tiny computers have allowed us to do things that were once considered science fiction. Take the 1960s film, Fantastic Voyage, where a crew is shrunk to microscopic size and sent into the body of an injured scientist.

While we aren't shrinking humans quite yet, scientists are working with nanotechnology to send computers inside patients for a more accurate and specific, diagnosis.

Albert Swiston, a biomaterials scientist at MIT, is testing a tiny pill that combines a microphone, a thermometer and a battery to collect several measures at once from inside a body. It's a latest in a series of ingestable computers like a Proteus sensor that tracks how patients take prescribed medications, a VitalSense from Philips that tracks a patient's temperature or a PillCam that allows people to skip colonoscopies.

Swiston and Stephen Shankland, senior writer for CNET covering digital technology, joined NPR on All Things Considered to discuss the future of nano tech on Monday.

Here are some takeaways.

On how small computers have become

Through the amazing technological innovations of Moore's Law, microprocessors — that's the chip brain that's inside every computer — have been getting smaller and smaller every year.

Instead of getting faster PCs, we're getting tinier PCs.

On why he isn't sold on thumb-sized computers

I think they open up a lot of new avenues because they're relatively inexpensive so you can fool around with them. It's not a delicate, precious object you have to worry a lot about. You can tinker with them. If you sit on it and it cracks, it isn't the end of the world. I think it can be liberating. But for most people, a traditional laptop is a much more useful product and it's going to run faster. These little tiny computers are constrained.

On the future of computing

You might look at a future where you don't have computers at all. The computing power you need is just woven into the fabric of your shirt, or maybe it is in your ring, or your watch. Maybe that device connects automatically to some screen next to you, or some projector you carry with you.

Maybe you won't even need a display — it will just get piped straight into your eyeballs.

It's a device that is so small, it's the size of a large multi-vitamin pill that you might take, and it is able to listen to your heart, and listen to your lungs, and it has a thermometer on board that can tell you what your heart rate, your breathing rate and what your body core temperature are. And then it can send that information outside of you to a smartphone or to a laptop computer, and tell you what those vital signs are without touching the body. It's not a wearable, it's an ingestible.

On the target audience

If you're a performance athlete, $70, which is roughly what it would cost to build such a device, is totally a trivial amount. Tom Brady could be taking these things every quarter. However, it's true that you couldn't be taking these every day — it would be just too expensive. So we're thinking of markets where a patient comes into an emergency room and needs to be monitored for a short period of time.

But you can imagine cases like military or performance sports where you could be taking these before every game or every mission.

On the potential for a computer — inside your body — being hacked

It's not implantable, it's not there forever. So while it's true that hackers can hack computers, you'd only have to worry about it for a couple of days. In fact, I don't think you'd have to worry about it very much, even for those few days, because that information that you're sending out in the current device we have is pretty simple.

On the future of ingestible technology

As electronics get smaller and smaller, more capabilities can be put onto one of these devices. Right now, we essentially have a microphone, but you can imagine having a real time camera, that is, say, able to stream through the body, or able to take samples of fluids in your body to tell you things like more subtle markers for cancer, for heart disease.

Being able to travel in the bloodstream or affect the nervous system, I think, is the next great frontier of medicine.