Accessibility links
Grandfather Of Virtual Reality: The Virtual Can Show The Beauty Of The Real : All Tech Considered Tom Furness has been working for decades on what is now known as virtual reality and thinks it has the potential to solve the world's biggest problems. But with new power comes new responsibility. 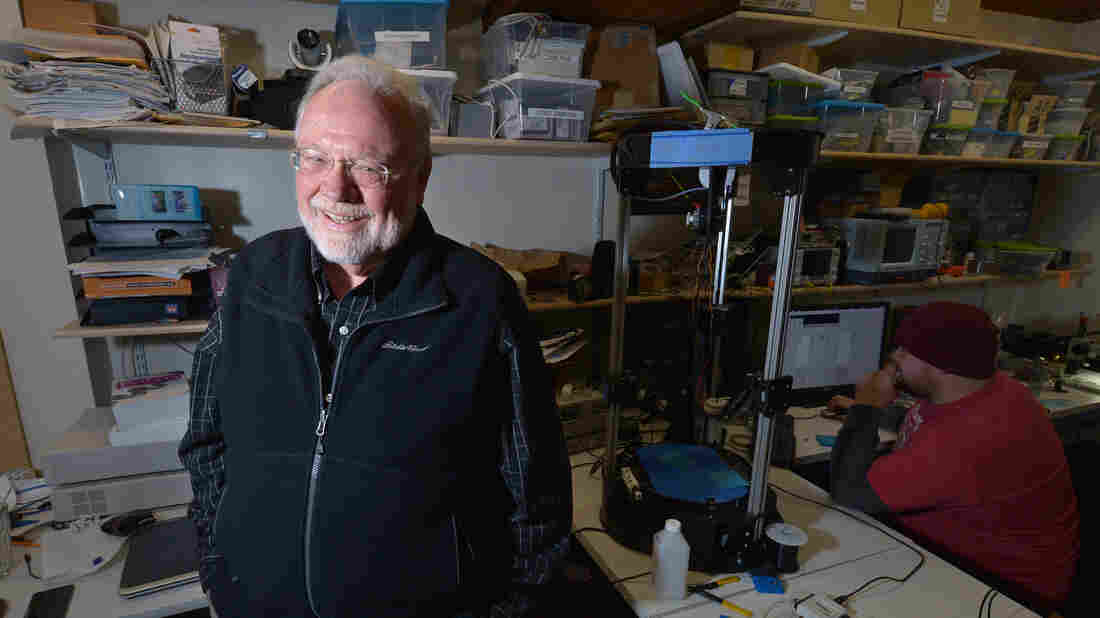 Dr. Thomas Furness (left) in one of the labs stretched throughout a nondescript house in Seattle that's home to his RATLab. Gil Aegerter/KUOW hide caption 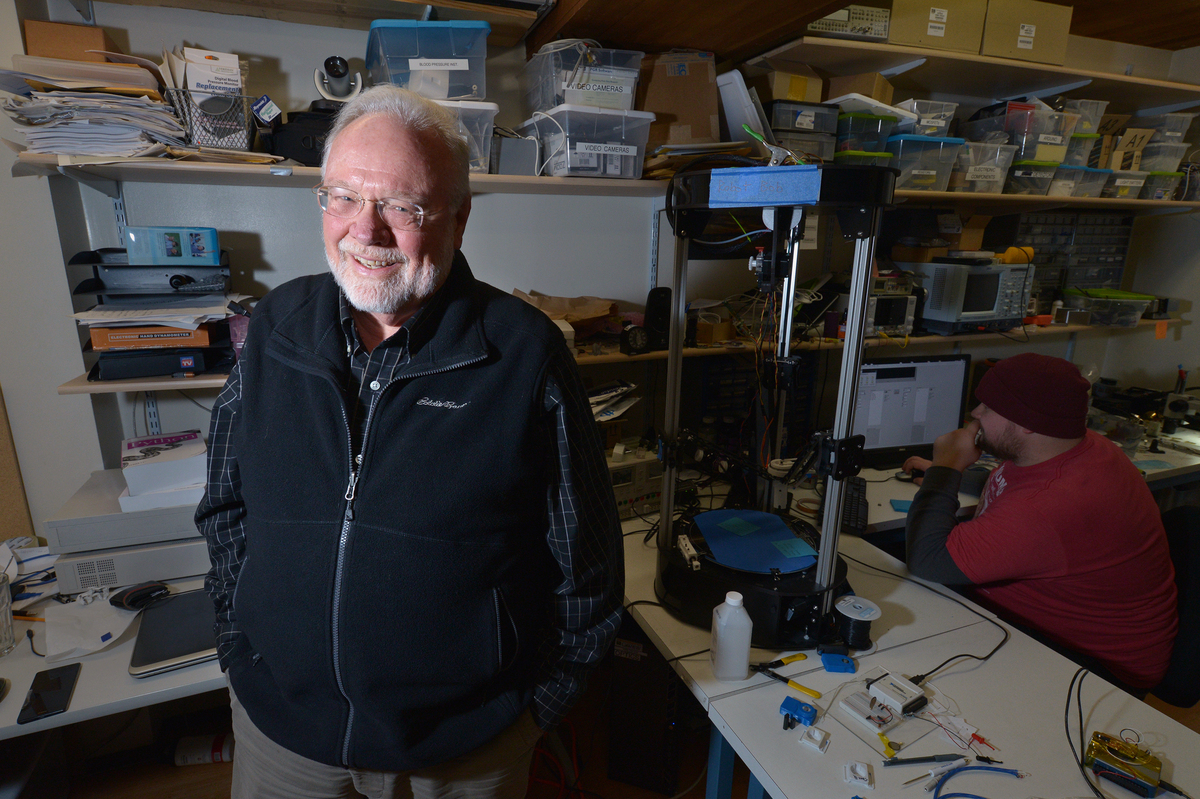 Dr. Thomas Furness (left) in one of the labs stretched throughout a nondescript house in Seattle that's home to his RATLab.

Thomas Furness is known as the pioneer who stood at the inception of what we know today as virtual reality.

He often gets called the "grandfather of virtual reality": he started with work on interfaces of fighter aircraft cockpits and now, at 72, he's been at it for more than four decades — longer than the creator of Oculus Rift has been alive. And with his looks and demeanor, Furness would make a convincing Santa, only the kind who literally schools people in three kinds of engineering, aeronautics and astronautics at the University of Washington, and whose elves come with graduate degrees.

Like many observers, Furness agrees that VR is going to be a major tech theme for 2016. And as a founder of the Virtual World Society, he dreams that this technology could one day solve our deepest societal problems.

I met Furness in his buzzing private RATLab inside a nondescript house on a busy Seattle neighborhood street ("RAT" stands for "rockin' and thinking" — rockin', he says, in both meanings of the word). We spoke about the thin line between what's real and what's not, a dark side of VR, its bright promises and how a virtual world can show you the beauty of reality. The interview has been edited for length and clarity.

It seems like virtual reality has been on the cusp of emerging into mainstream use for years. But a lot of people now think that VR will be a major tech theme for 2016. What's changed?

We have the technology that we never had. We certainly had the dreams before, but the computing just wasn't good enough. Nor did we have the screens that had high enough resolution. ... The shifting is now going from the delivery technology to what is the content. So I think in 2016 people are going to be buying these things, and then it's going to be the heyday for the people who generate content.

It seems like VR may not exactly be for everyone — some people get sick while experiencing it. Why is that?

Well, it turns out Mother Nature has done this on purpose. Because when we have a conflict between what our eyes are telling us versus our vestibular mechanism is telling us — our inner ear, our balance mechanism — if the eyes are saying, "You're on a roller-coaster," but your inner ear says, "No you're not, you're sitting still," that conflict between cues scrambles the brain. So the only solution a brain comes up with is: "I've eaten some poison mushrooms." And what do I do? Barf to get rid of it. That's the body's natural mechanism when the senses don't work. So that's what can happen in VR when you have this conflict.

There are some people who don't have that reaction as much, those are usually the visual-dominant people. But the vestibular-dominant people, who are sensing more from their head, they do.

Now we know what causes the problem, it's been well-studied, and we know how to solve it. ... We have a number of techniques where we insert things into the virtual world or we restrict some kind of motions so we minimize that effect.

For many people, VR is associated with gaming, but you talk about VR changing society – influencing how we tackle fundamental problems like world hunger, or even diseases. How could a technology like VR get us to that point?

I think that the biggest thing that we can do short-term is education, to help people become aware [of a problem] — and I mean aware in a visceral way. We can be aware in our head but not in our heart, and what VR can do is get our heart into it because it's up close and personal. ...

Virtual reality is the way to move your senses to another place. And it can be a place where you're collaborating with other people who understand the science and the technology that could help make these changes happen.

So you really believe that this technology has this ability to increase our empathy for things and people.

Absolutely. But it doesn't take the place of being in the real world.

For example let's say that you want to go into a virtual forest. OK.

You go into a virtual forest and you become a tree. You're a tree. And you're sucking up nutrients from the soil. You see yourself growing up in the forest and you're spreading out your leaves and you're doing photosynthesis and the sun is there. All this is going on — and your friend is a bird. Your friend is a bird, and comes and lands on the tree and builds a nest there. Another one of your friends is an earthworm that aerates the soil. And so you have this ecology that you experience in a visceral way.

Now, that doesn't take the place of going into a real forest. But when you go into the real forest, you look at a tree completely changed. Now you understand: I've been a tree; I mean, I've sort of been a tree. But what I think this can do is sensitize us to how beautiful the real world really is.

What are some areas that VR could have a big impact on — say, three to five years from now — that we may not realize today?

Certainly one of the biggest short-term impacts of this will be training. One of the things VR can do is give people hands-on training with simulations. Similar to what we used to do with flight training for commercial airlines, we can do it for allied health care, for people learning how to repair things like engines or copying machines.

Especially human bodies! It takes a long time to train these professions now, and [with VR] we can speed that up remarkably.

For example if you take a doctor who's doing a residency in urology, they have a limited amount of time. ... These residents may only be able to do maybe 50 procedures of [one kind], and all of them are sort of normal. But with VR simulations they can do 50 a day. And not only that, you can [train them] in all kinds of unusual circumstances.

[Also] we haven't really yet been able to do something like a Vulcan "mind meld" — I mean like on Star Trek, where Spock was able to merge his mind with another person. That's the ultimate communication system. ... VR will let us do that. It will let us look through somebody else's eyes, let us communicate our perspectives and [give us a space] where we work on things together. ...

What Happens When We Step Inside The Screen?

And there's another whole area of design. Right now we pretty much design 3-D things using 2-D. We're putting things on screens. But why not design 3-D within 3-D? You can actually sculpt in virtual worlds. ...

There can also be the other side, which is the desensitization.

When we're up close and personal and yet we're blowing people away with weapons, that's really going to be desensitizing. If you think it is on the screen, just wait until you get inside there. And see, that's the default for all these game makers and the default for competition. To me, that's disturbing.

With this technology we have a new responsibility; it's like splitting the atom all over again. We're unleashing enormous power.

So as VR becomes more accessible and more mainstream, how do we keep intact the line between what we're perceiving in that virtual world versus the real world?

So, that's this question of reality, what is reality? This is a question probably for the philosophers more than anyone else.

But I believe what will happen is that all of it will become reality. You know when you think about it, we're actually adding to reality. A whole new thing that humans can experience — which is a reality.

But you can lose weight.

With a virtual diet.

Jamala Henderson is a reporter and newscaster at KUOW in Seattle. She is on Twitter: @jamnhen