Accessibility links
A Skeptical Review Of CBS' Super Bowl Online Streaming Success : All Tech Considered For the first time, CBS put the full Super Bowl, with ads, online and claimed record viewership. But StreamingMedia.com's Dan Rayburn says the decision to stream is getting too much hype. 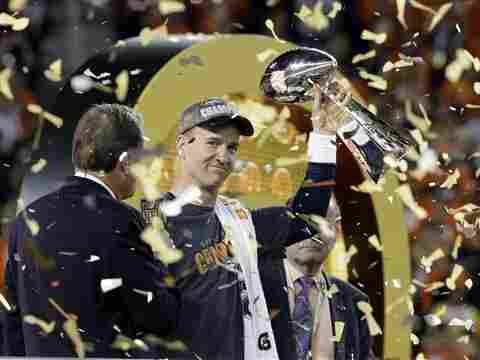 If you watched Sunday's Super Bowl, how did you get it? Over cable? Rabbit ears? (Yes, those still work.) Or did you stream it online?

CBS put the big game on the Internet and for the first time, streamed the commercials online as well. According to Nielsen's national ratings, with 111.9 million viewers, the game was the third most-watched broadcast in American TV history (behind two other recent Super Bowls).

And despite reported troubles streaming the game on Apple TV and Google's Chromecast, CBS also says the online stream had a record audience of almost 4 million unique viewers or an average of 1.4 million viewers per minute.

But Dan Rayburn was unimpressed. With the complicated nature of estimating the size and impact of online streaming, Rayburn, executive vice president at StreamingMedia.com and principal analyst at Frost & Sullivan, tells NPR's Kelly McEvers it may not be the future of live sports.

Doesn't mean much, to be honest with you. There's way too much hype over something like putting a live sporting event online, because we've been doing this for 20 years. And yes, the traffic we get to events like this [is] larger but it's typical of an event after this, like we saw with CBS, they come out and pat themselves on the back and say it's a record and then they give us no data or numbers as to what that actually means.

The Best And The Worst Of Super Bowl Ads

If we compare it to last year, last year they had a little over 1 million simultaneous streams at the same time, watching the Super Bowl online. But keep in mind that's not a million simultaneous people, because someone like me is watching six or seven streams at a time. ... A million is not a big deal when you're talking about there's roughly 100 million pay TV subscribers just in the U.S. alone. You're talking about 1 percent of the whole market.

On the significance of the popular commercials being streamed as well

The significance there is just in terms of some of the back-end technology. It's actually easier for them to put the ads online than to take them out. There's something in the industry that's called stream stitching, which is how you stitch live ads into a stream ... . But since we get no metrics or demographics afterwards of who watched what for how long or how much money they made from the ads. We don't even know if this was a money-making thing for them online. Which it probably was not. They probably lost money.

On whether streaming is the future

The problem you have is the fragmentation in the market. So for instance, if you wanted to watch it on mobile yesterday, you could only do so if you were a Verizon customer. So this is not the future for large-scale live events. The problem we have in the industry is many people think that one technology replaces another, when typically it's a complement to it. So the Internet broadcast that we see, whether it's live or on-demand, that can't replace TV distribution at the same quality, the same scale and the same reliability. The technology just doesn't support it.