Accessibility links
Should India's Internet Be Free Of Charge, Or Free Of Control? : All Tech Considered Facebook's free Internet service was banned in India on the basis of net neutrality this week. Internet providers, regulators say, should not be allowed "to shape the users' Internet experience." 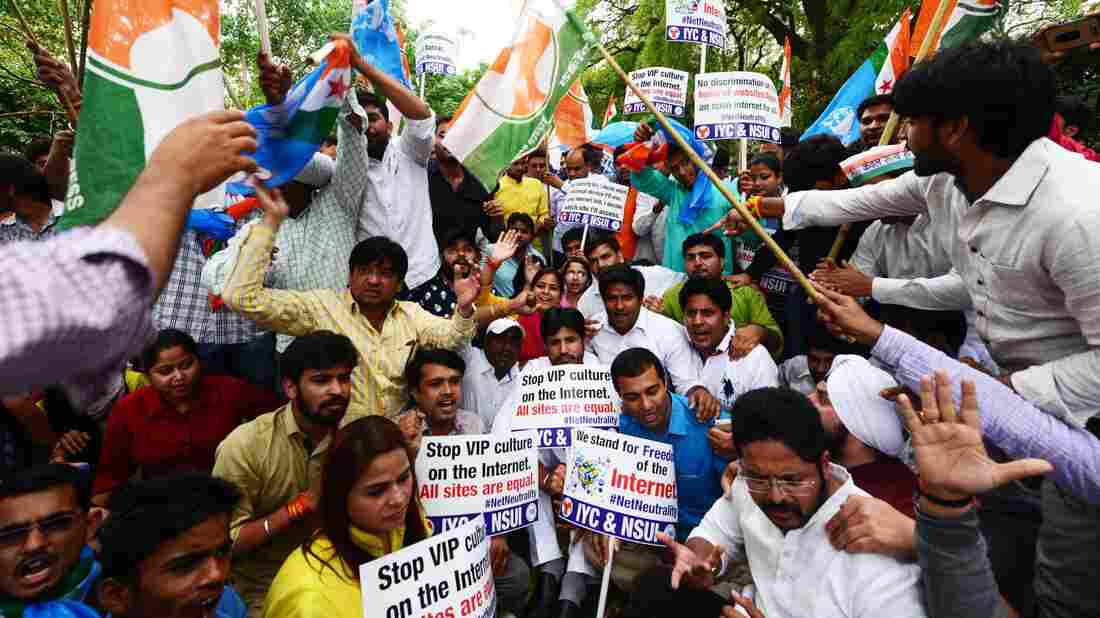 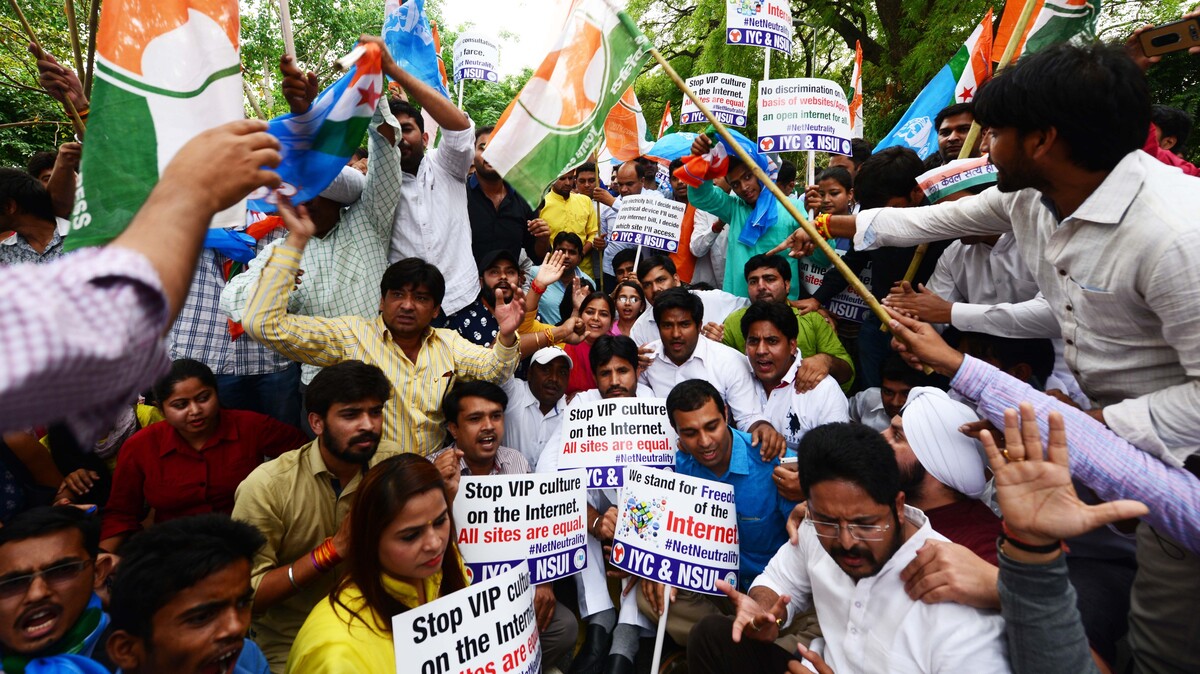 Members of Indian Youth Congress — a wing of the National Congress party — and National Students Union of India protest for Internet freedom in April 2015 in New Delhi.

In a far-reaching ruling, India has prohibited telecom service providers from charging different prices to consumers to access content on the Internet — a blow to Facebook and its aggressive bid to offer a free but stripped-down version of the Internet aimed at India's poor.

The decision this week endorsed the principle of net neutrality, which holds that the Web is open and prioritizes no service over another. India's Telecom Regulatory Authority in effect says that "discriminatory" pricing on the basis of content violates the Web as a neutral carrier of information.

An example given by the Authority says "a consumer cannot be charged differently based on whether she is browsing social media site A or B, or whether she is watching streaming videos or shopping on the Internet."

However, Facebook's deal with local mobile operators provides smartphone users access to a limited selection of apps — news, weather, and the social media site itself — free of charge. It's called Free Basics and operates in more than 30 countries.

Nikhil Pahwa, co-founder of SaveTheInternet.in, says the problem with the free-Internet program is that Facebook, rather than the consumer, becomes the gatekeeper of content.

"And this effectively reduces usage of the open Web, which is what the Internet as we know it today is," Pahwa says.

Preventing the "fragmentation" of the Internet is key, he says.

India's regulators expanded on that, saying telecom service providers should not be allowed "to shape the users' Internet experience ... the use of Internet should be in such a manner that it advances the free speech rights of citizens by ensuring plurality and diversity of views, opinions, and ideas."

The battle to persuade regulators to halt Facebook's introduction to the Internet has been a boisterous one. Netizens in India derided "Free Basics" as "a digital land grab" and Facebook CEO Mark Zuckerberg a modern-day colonizer. One of Facebook's own board members caused an uproar on social media when he also compared Free Basics to colonialism, and forced Zuckerberg to disown the "deeply upsetting" remark.

India's telecom regulators acknowledge that providing free service for the poor is a worthwhile endeavor, and say the government is pursuing options. But they find that discounted pricing including free schemes puts small content providers outside such schemes at a disadvantage, thus creating barriers for entry into a non-level-playing field.

Sadanand Dhume, who writes about the South Asian political economy and society at the American Enterprise Institute, calls the opponents of Free Basics "purists."

The reality, Dhume says, is that nearly 1 billion of India's nearly 1.3 billion population have no way to go online.

The lack of Internet access is what Zuckerberg says motivated him to expand Free Basics into India.

The 31-year-old tech guru speaks of Internet access as a sort of social scaffolding that could uplift millions, and he projects "Free Basics" as an altruistic imperative.

"Do we connect that fisherman in India now?" Zuckerberg asks in a Facebook video, and repeats the same questions about an expectant mother in Ghana and a student in Colombia. "Or do we shut them out and tell them that they have to wait until they afford to pay for it themselves?"

A recent survey found that India now has 220 million smartphone users, edging out the U.S. as the world's second-largest market. IT commentator and businessman Manish Sabharwal says that growth and the lucrative prospect of monetizing content for all those users is what has lured Facebook to India.

5 Things To Know: Net Neutrality Is Back In Court

"The notion that Facebook is portraying that they are doing this out of philanthropy or the goodness of their heart may be a little rich," Sabharwal says. "Both Amazon and Facebook are focusing on India because they have been locked out of China, and India is a very important growth market."

India's Telecom Authority had earlier asked Facebook's Indian Partner Reliance to suspend the free service. Under the new ruling, violators will be fined upwards of $700 a day.

Facebook declined to provide NPR a spokesperson on the issue of net neutrality in India.

In a Facebook post, Zuckerberg vowed to keep working to break down barriers to Internet access in India and around the world. Opponents of Facebook's push into India said they will be closely watching.

In a separate statement, the Virginia-based group Protect Internet Freedom expressed outrage at the decision in India, a country with one of the lowest Internet penetration rates in Asia.

"It's akin to a debate among the well-fed about whether the starving should be given soup that isn't organically sourced," said Jerri Ann Henry, public advocate for the group.

Telecom Authority Chairman Sharma, meanwhile, said regulators will turn next to another issue at the heart of the net neutrality debate: the ability of service providers to slow down or speed up access to websites.