Accessibility links
After Kalamazoo Shootings, Uber Defends Its Driver Background Checks : All Tech Considered Uber says no background check would have flagged the suspect in the Kalamazoo shootings, because he had no criminal history. The driver had received generally positive rider feedback and ratings. 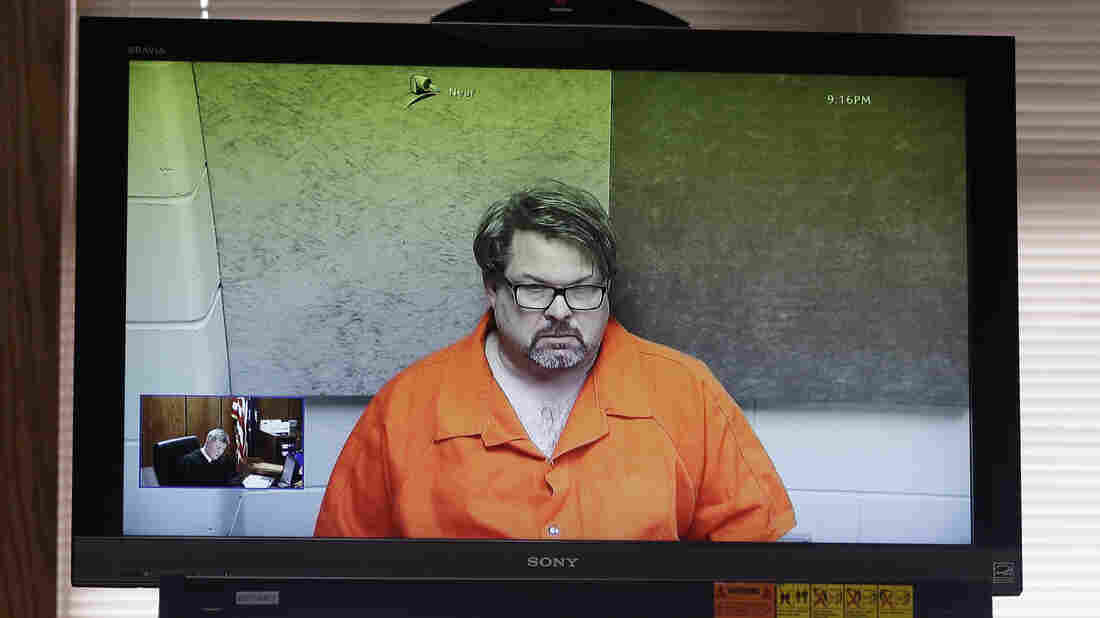 Jason Dalton is arraigned via video Monday before Judge Christopher T. Haenicke in Kalamazoo, Mich. Dalton is charged with multiple counts of murder in a series of random shootings in western Michigan. Carlos Osorio/AP hide caption 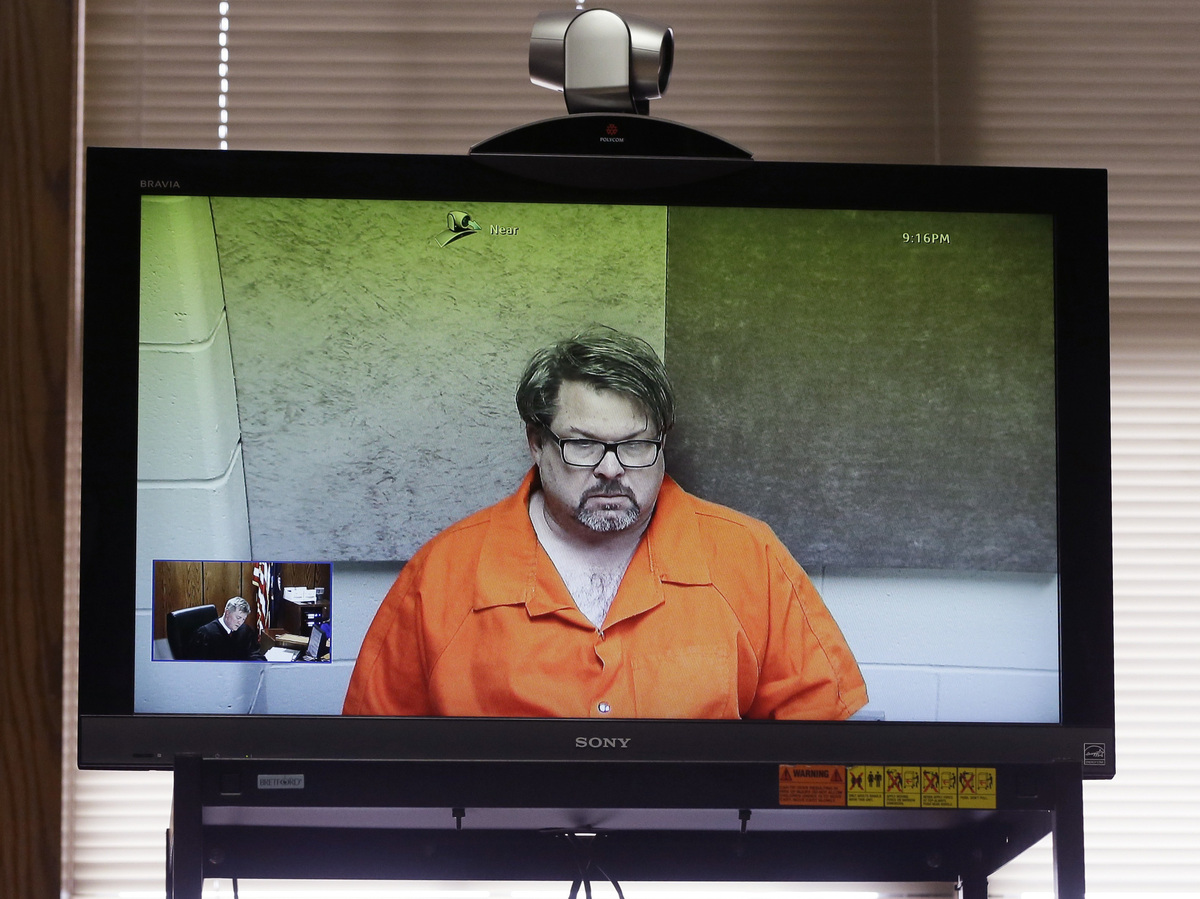 Jason Dalton is arraigned via video Monday before Judge Christopher T. Haenicke in Kalamazoo, Mich. Dalton is charged with multiple counts of murder in a series of random shootings in western Michigan.

If news headlines were all you read about the Saturday shootings in Kalamazoo, Mich., you might know only the basic details: that six people were killed, that the shootings appeared random, and that the suspect was driving for Uber at the time.

'You Aren't The Shooter, Are You?' Uber Ride Came Just Before Suspect's Arrest

We still don't know a lot about what happened in Kalamazoo, including the motive that allegedly caused Jason Dalton to carry out the series of seemingly random shootings in between passenger pickups. It's unclear what role his occupation as an Uber driver might have played in this case.

Despite that, Uber has been put on the defensive, as the shootings have resurfaced many questions the company has tackled over the years about the way it decides who is fit to be a driver.

Dave Sutton — a spokesman for the "Who's Driving You" advocacy campaign on behalf of the Taxicab, Limousine & Paratransit Association — points out a key difference between many of the taxi background checks versus those used by Uber and Lyft: Taxi and limo companies rely on fingerprints submitted to law enforcement, as opposed to third-party checks based only on a name.

Uber has confirmed that Dalton did pass its background check to qualify to join its driver fleet, and the police have said that he had no criminal record. There's no evidence at this time that any potential warning flags were missed.

"No background check would have flagged and anticipated this situation," says Uber's Chief Security Officer Joe Sullivan. "If there's nothing on someone's record, then no background check is going to raise a flag. As this case has shown, past behavior may not accurately predict how people will behave in the future."

The company also says Dalton had a 4.73 rating out of 5, and generally received positive feedback from riders for the more than 100 pickups he did for Uber since joining the fleet on Jan. 25.

According to Uber, its driver prescreening currently includes a review of motor vehicle records and a search through criminal records at the county, state and federal levels by a company called Checkr, which is nationally accredited by the National Association of Professional Background Screeners.

Uber's safety board members argue that law enforcement fingerprint checks are no more rigorous than these screenings, and can generate more false positives. Critics argue that name-based checks are easy to rig with a false name, and that Uber's checks don't go far back enough in time.

Uber drivers overall appear to be split about what this incident means for them and the company, based on comments posted on SherpaShare, a site that has a community of 50,000 Uber and Lyft drivers and lets them chat over an app.

Ryder Pearce, co-founder and chief community officer at SherpaShare, says he's driven for both ride-hailing companies, and that one difference between them is Lyft's greater focus on human interaction, with training and mentorship for new drivers.

That's also a daily difference between a taxi or limo company and ride-share companies such as Uber, Pearce noted: "I think taxi drivers traditionally have had fleets and lots, so at the beginning of the shift, you will go, check in with a dispatcher, hang out, have a coffee with other taxi drivers and then go out — rather than this completely dispersed Uber network, where you don't have to go anywhere, you just turn on the app in your car and drive for eight hours and never talk to any other driver."

Uber's Sullivan says the company is not considering changing the process or introducing any new human interaction layer for new drivers as a result of the incident in Kalamazoo.

"As it stands right now, the system that Uber has is extremely safe," says Ed Davis, an Uber Safety Advisory Board member and a former Boston police commissioner, "and the idea that simply by having someone look at someone that they could determine if they're about to have a psychotic episode is a faulty theory."

Another board member said the Uber debate pulls attention away from bigger problems.

"I do think that in many ways, this focus on Uber is a distraction from the availability of guns, and guns perhaps in the hands of people who shouldn't be able to have such easy access to them," says Margaret Richardson, a former chief of staff to former U.S. Attorney General Eric Holder.

Earlier this month, Uber settled litigation over its $1 "Safe Rides Fee" and other practices. The AP reports:

"The company said earlier this month that it will pay $28.5 million to settle two lawsuits that alleged Uber misled customers about safety procedures and fees. It's also facing a separate lawsuit by district attorneys in San Francisco and Los Angeles, who alleged that Uber's checks failed to prevent the company from hiring several felons. ... Uber, meanwhile, instituted a policy last year that prohibits driver and passengers from possessing firearms. Anyone found to be in violation of the policy may be prohibited from using or driving for the service."

The company also previously had disclosed that it was working on a way to better monitor drivers' speed and behavior on the road in real time to possibly prevent dangerous situations.