Accessibility links
Google Makes The Case For A Hands-Off Approach To Self-Driving Cars : All Tech Considered California regulators say autonomous cars should have a licensed driver, but a top Google engineer says that makes as much sense as putting a steering wheel or brake pedal in the back of a cab. 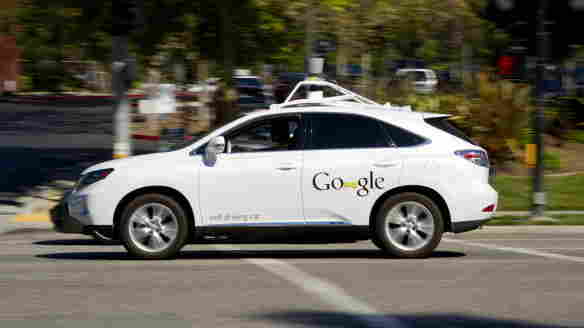 While other automakers are working on a gradual progression toward more automation in cars, Google has its eyes on a fully automated self-driving car. Bloomberg via Getty Images hide caption 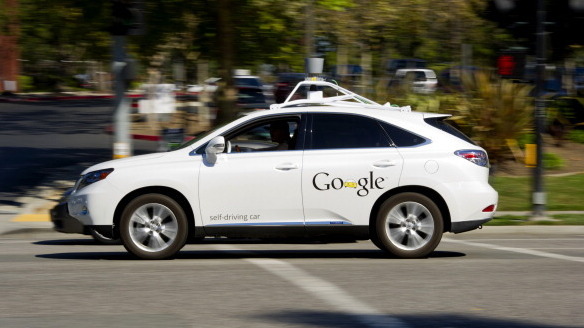 While other automakers are working on a gradual progression toward more automation in cars, Google has its eyes on a fully automated self-driving car.

Last year, Ford asked people if they could imagine themselves buying or riding in a self-driving vehicle.

"We do have a theory about what explains the disparity between these markets, and I think it gets down to the joy of driving," says Sheryl Connelly, who tracks global trends for Ford. "And China and India you have some of the most egregious congestion. You have high road fatality, you have immature infrastructure and also I think there's not the established emotional attachment many Westerners have with their vehicles."

Connelly says the self-driving car is an imperative for an auto company in the 21st century, and many automakers have been working on a gradual progression toward more and more automation in cars.

But Google is different: It went straight ahead to create a fully automated self-driving car.

One way the company has done that is by completely taking the car out of the hands of the driver. The latest Google prototype looks like a smaller version of a Volkswagen Bug: It's a little two-seater with no steering wheel and no gas or brake pedals.

NPR's Robert Siegel is talking to several key players this week about the emerging world of self-driving cars. In the latest conversation, he spoke with Chris Urmson, technical director of the Google self-driving car project.

On why we need self-driving cars

It really starts with safety. In America, there's 33,000 people that are killed on the road every year, and to put that in perspective, that's equivalent of a 737 falling out of the sky five days a week. ... There is just a tremendous opportunity there to save lives — 94 percent of those accidents are due to human error, and the good news is we can build software and hardware that can see the road and pay attention all the time and react more quickly and keep people safe on the road. The other big aspect is accessibility. When you think about the baby boomer generation, they're starting to get to a point where they feel uncomfortable driving or their family feels uncomfortable about them driving. Making sure they have access to transportation, to continue to do all the things they do today — to go and visit their grandchildren or just to go to a coffee shop — we think that is an incredibly important use for this type of technology.

We've always thought that having a driver in a vehicle while testing makes a tremendous amount of sense ... the whole point of the system is to have someone in the vehicle who can observe and keep things safe. But once the technology is actually out on the road, I think that it isn't the right answer. I think the idea is to give more people mobility, and by increasing the requirements on the person who's driving the vehicle when they should be doing less doesn't make a lot of sense to me.

On whether someone should be able to override the controls

It really depends what you mean by "take over controls." You wouldn't imagine that in the back of a taxi, we put an extra steering wheel or brake pedal there for the passenger to grab ahold of anytime. It would just be crazy to think about doing that. But at the same time, I could imagine that there are vehicles where most of the days you don't really want to drive it, so let it take you to and from work in the morning, for example, but on the weekend when you get a chance to get out onto some open road, that you might enjoy driving in that location. But I think the idea that you want the person to jump in who hasn't been paying attention or maybe had a couple of drinks with dinner and then jump in to override is probably not the right idea.

This is actually one of the funnest videos we have. Our car was out testing one day and as it comes around the corner, there's a woman in an electric wheelchair with a broom in her hand, chasing a duck and she chases it and they end up wheeling around, I suppose, on the road in a figure eight for a few moments and then run off the side of the road. And it's one of those situations that really highlights the challenges of what we're trying to do. There is nowhere in a DMV handbook or a federal regulation what you should do when there is a woman chasing a duck on a road. So our cars have to be able to recognize that this is a very unusual situation, let it kind of slow down, give it some space to play out because as a human watching you have no idea what's going to happen next. And then once the roads clear, then carry on your way. And today, our cars are starting to be able to do this.