Accessibility links
At Tech Conference, Meet The Tesla Of Bikes And A Weaponized Phone : All Tech Considered Mobile phones that double as stun guns. Smart bikes connected to an app that can deter thieves and track your workout. We got an eyeful of futuristic gadgets at a mobile tech conference in Barcelona. 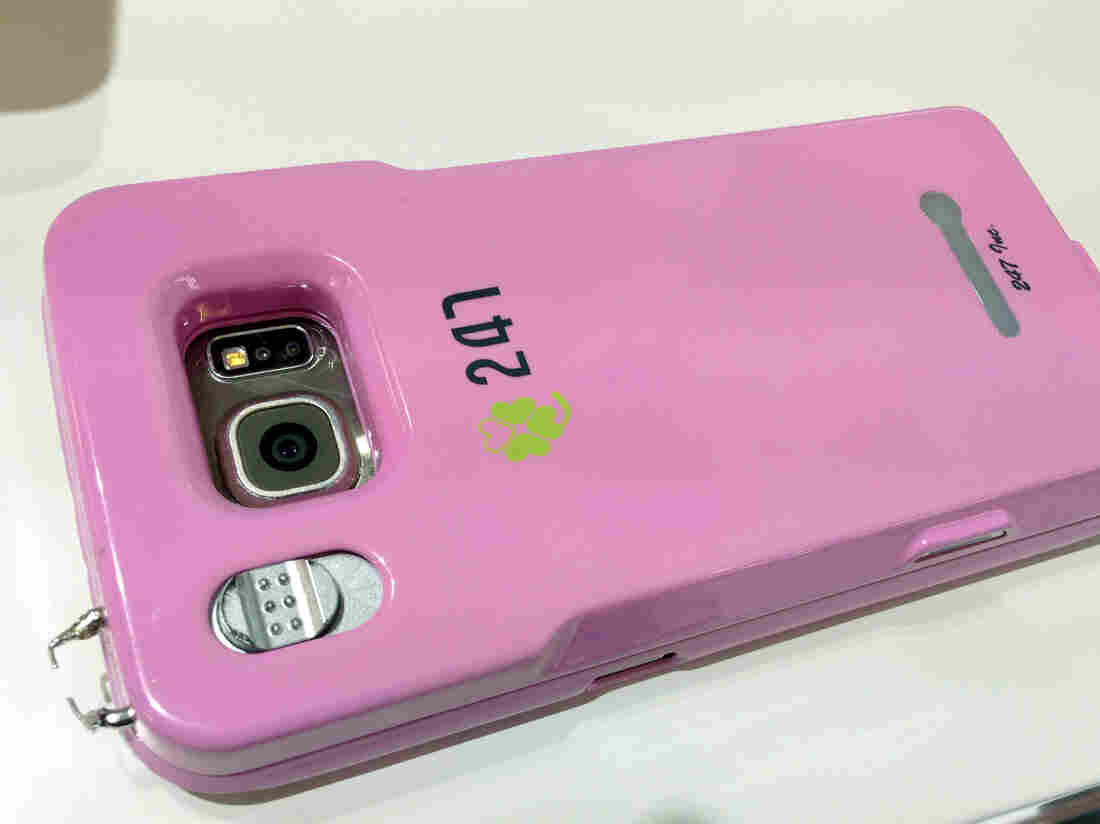 This smartphone case talks to an app that can turn it into a stun gun. Aarti Shahani/NPR hide caption 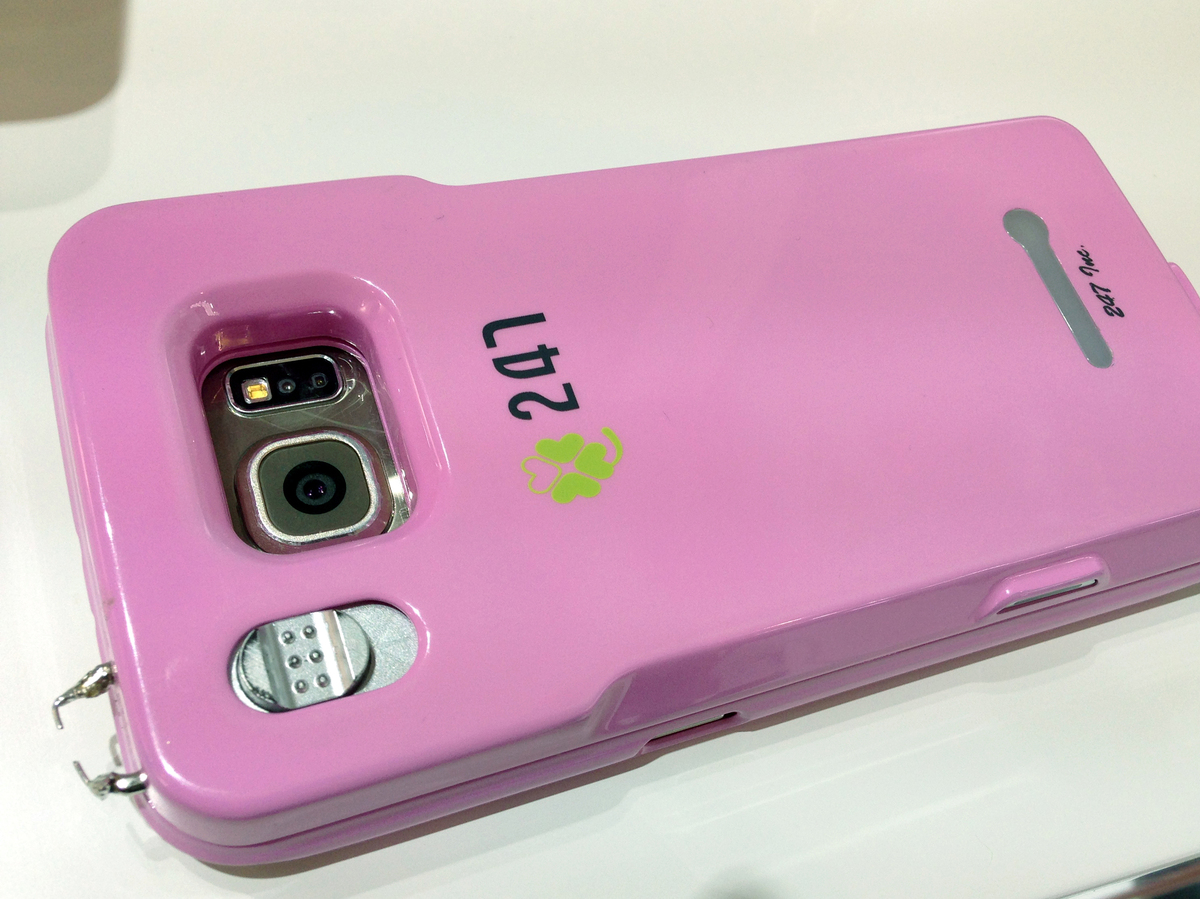 This smartphone case talks to an app that can turn it into a stun gun.

You might think of Barcelona as an enchanted, historic European city. This week, it's home to a massive tech gathering: the Mobile World Congress. Tens of thousands of people from every corner of the earth are there — many showcasing the novel ways they're connecting citizen-consumers to the Internet. I took a tour of Innovation City and here are a few of my most memorable stops.

The smart car by Jaguar — it didn't really impress me. Yeah, it's cool you can be in Jakarta and, with a phone app, unlock the doors to your SUV over in Johannesburg. But a bunch of carmakers are doing this.

What I've never seen before is a bike-maker doing it. And here it is: from a distance, just something that looks like a standard commuter bike, but step up closer and you realize it's the Tesla of bikes. Not that it's electric, but like the luxury car, it's powered by software and connected to the Internet. 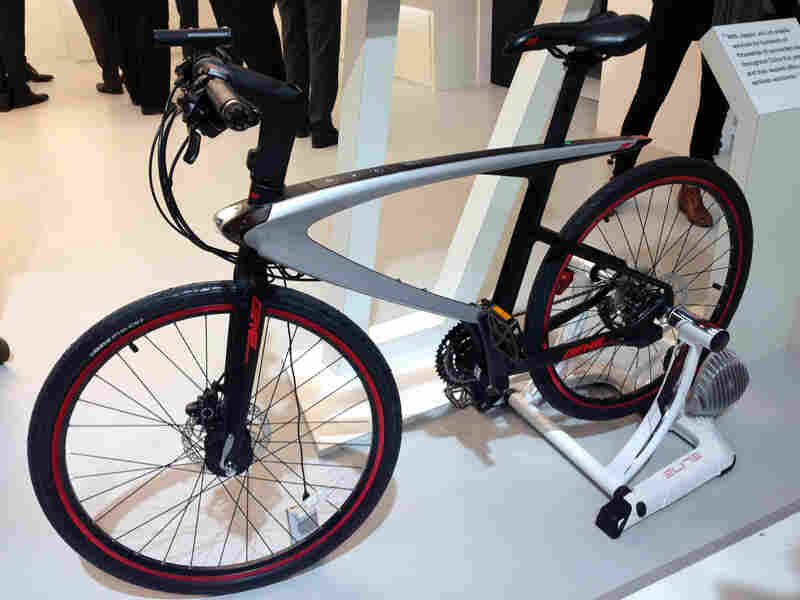 You can program this smart bike to play music, take photos or help you with a workout. Aarti Shahani/NPR hide caption 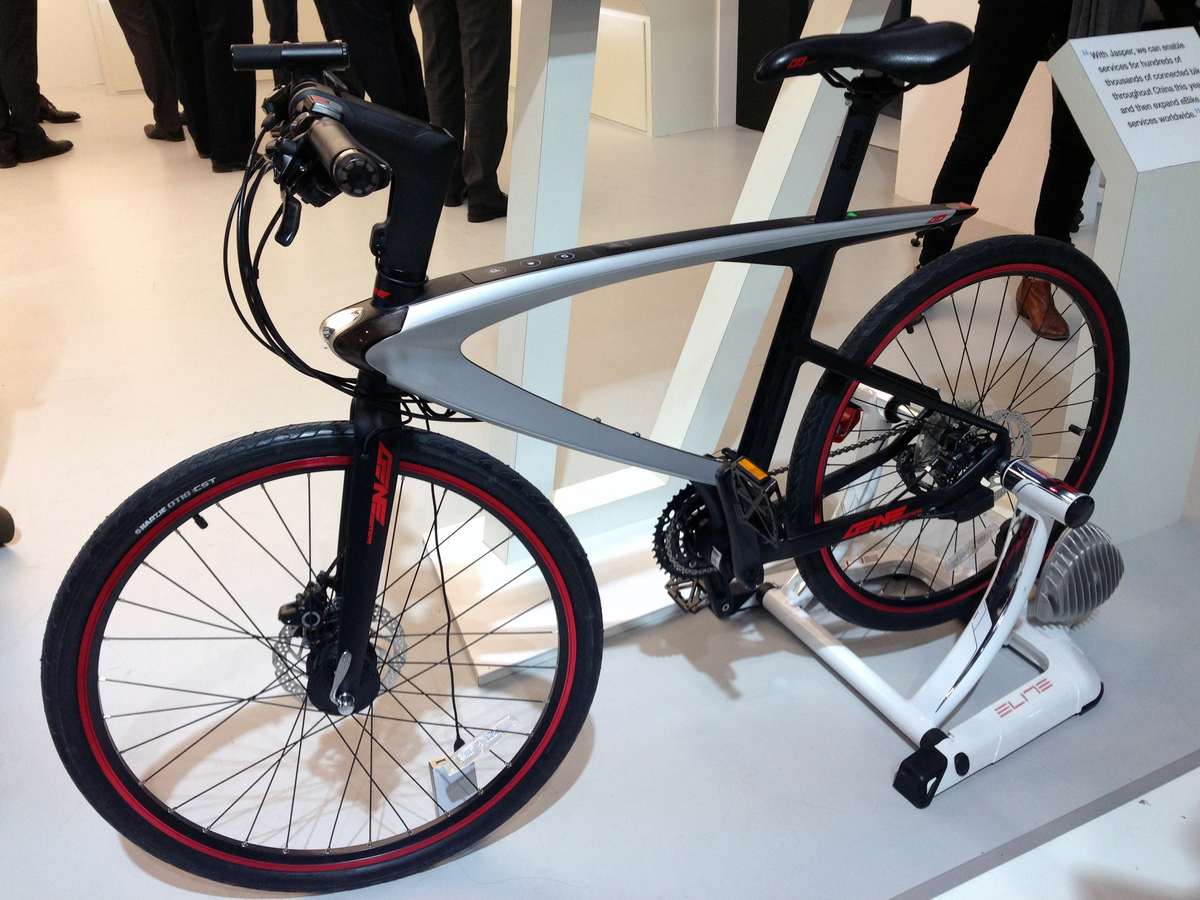 You can program this smart bike to play music, take photos or help you with a workout.

The bike has sensors embedded in the handles and a computer mounted in between. You download an app on your smartphone to control the bike's features, for instance programming a desired workout, for distance or heart rate, or streaming music while you ride. It's equipped with a GoPro camera, which is controlled by a big button that makes it easy to start the video as it is to brake — essential features for the modern cyclist.

For now, this decked-out bike is a only offered in China, but the partnership behind it — manufacturing by China's Letv, connectivity through the China Unicom mobile network and software management by Silicon Valley-based Jasper — plans to go global. The price is estimated to start at $600.

The bike's systems take 6 hours to fully charge and the charge lasts 3 days, says Theresa Bui with Jasper. And if a thief manages to steal the bike, just like the "Find my iPhone" feature for lost iPhones, the app can locate the missing bike.

The tech industry is always looking for the next big hit. And to Bui, the answer is not the smartwatch or virtual reality headsets, but these bikes.

In the acres upon acres of expo floor, I spot in the distance a peculiar smartphone case — one with little electrodes on the upper right hand corner. 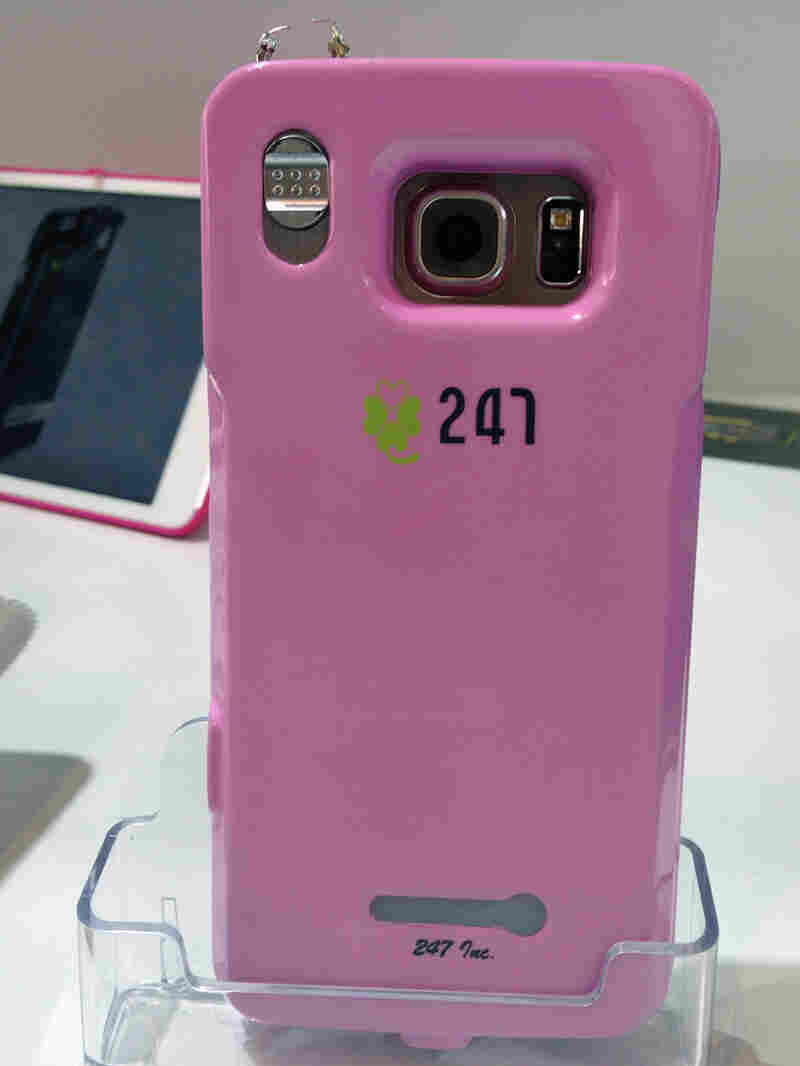 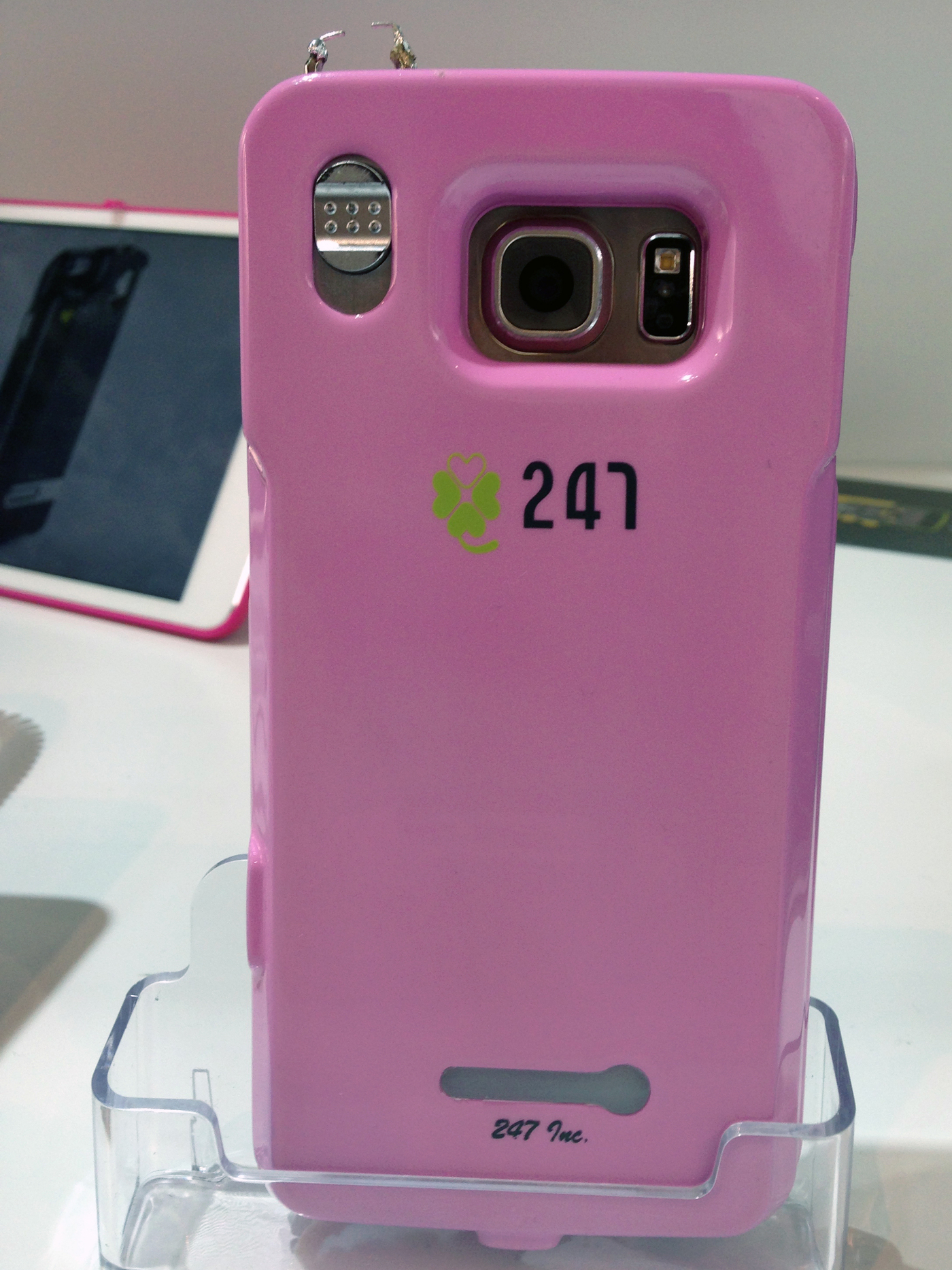 "It comes with a stun gun," says Jamie Park, who's showing it to me.

"It's a bundle," says Park, who's with the Korean company 247 Inc. that makes this security package.

OK, so some phone cases have bling; this one has bang. It works with an app called Volt, which activates the stun weapon while also switching on the camera to start recording what's going on around you and playing a siren to make it sound like help is on the way.

Plus, once the app goes live in June, Park says, it would be able to alert your personal list of emergency contacts as well as notify local police of your coordinates and send them your camera feed.

On my way to the cafeteria, I run into a strange grocery store. It's a big flat-screen TV, with pictures of food on rotating shelves. 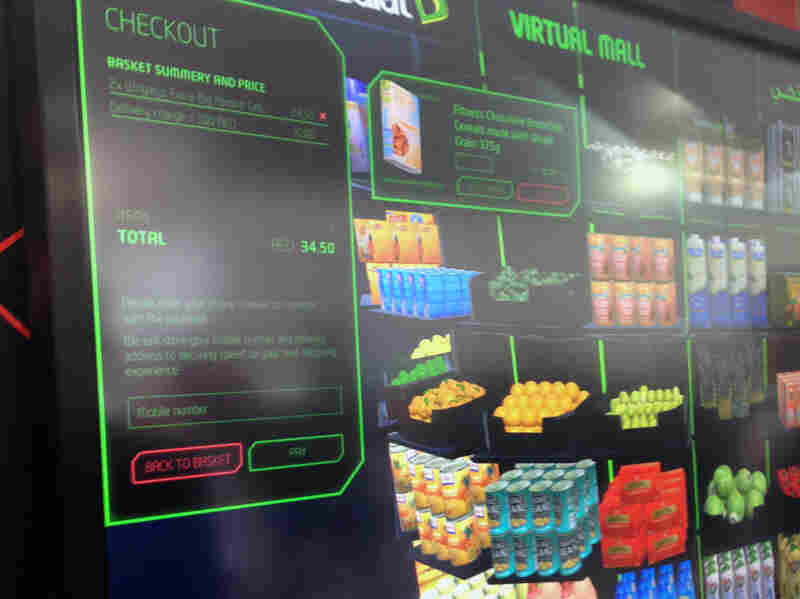 This online store was created through a partnership between a mobile company and a grocery chain in Dubai. Aarti Shahani/NPR hide caption 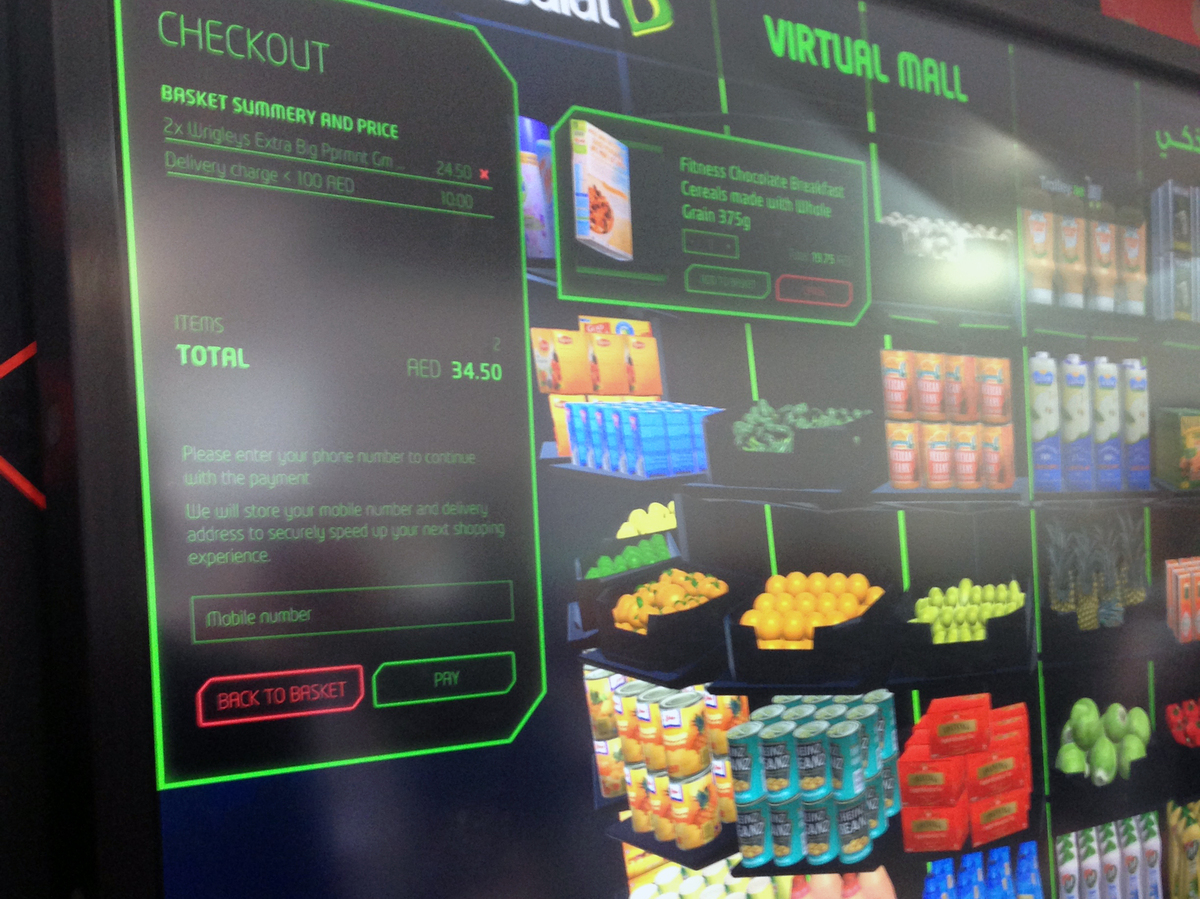 This online store was created through a partnership between a mobile company and a grocery chain in Dubai.

This is a virtual mall by UAE-based Etisalat. According to Tish Alexander, a conference spokeswoman, about 19 of these malls are in trams and metro stations around Dubai.

Etisalat is a mobile operator, like Verizon, but it's got a partnership with a local grocery chain to sell mushrooms, red peppers, tea, mosquito repellent — your local needs.

When I note it's not a particularly private shopping experience, Alexander says, "Yeah, (it's) like being at the market. Everyone can see what you buy then as well."

Delivery right to your doorstep is as fast as 2 hours, she says. Beat that, Amazon.