Accessibility links
'Body Hacking' Movement Rises Ahead Of Moral Answers : All Tech Considered In what they say is a quest to create a better human, body hackers implant digital devices into their bodies. Despite ethical and moral concerns, they say they are welcoming an era of transhumanism. 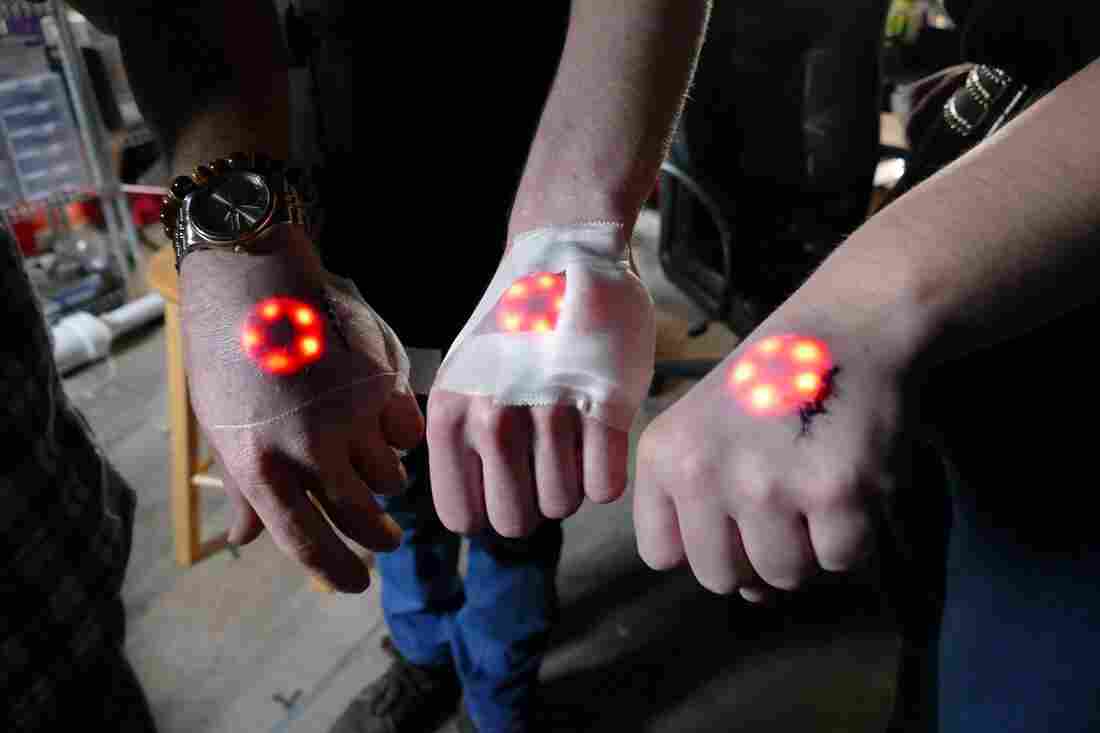 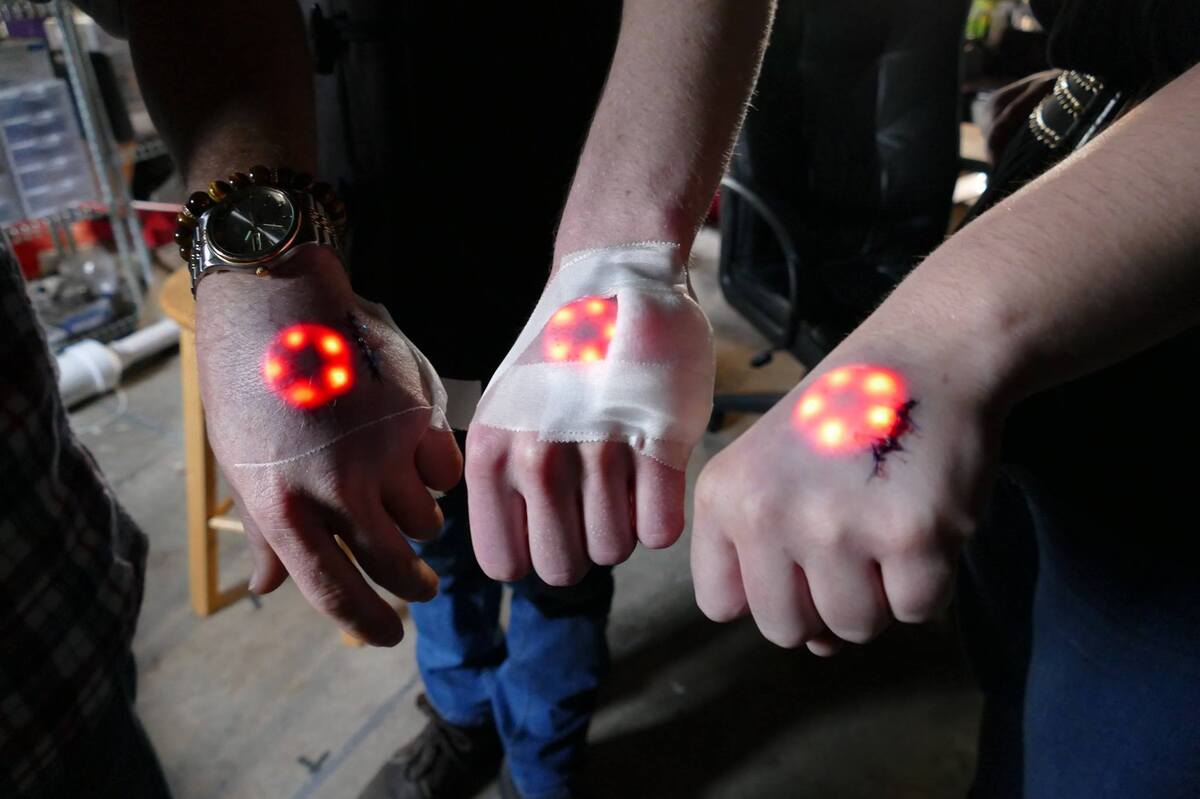 A curious crowd lingered around Amal Graafstra as he carefully unpacked a pair of gloves, a small sterile blanket and a huge needle. A long line of people were waiting to get tiny computer chips implanted into their hands.

Graafstra had set up shop in a booth in the middle of an exhibit hall at the Austin Convention Center in Texas' capital, where he gathered last month with several hundred others who call themselves "body hackers" — people who push the boundaries of implantable technology to improve the human body.

The movement evokes visceral reactions, brings up safety and ethical concerns and quickly veers into sci-fi questions about the line between human and cyborg.

Graafstra is a pioneer in the space. Using his own body to experiment, he designed bio-safe magnets and the microchip he was about to implant into the hand of A.J. Butt, who was sporting a tall, blue mohawk. 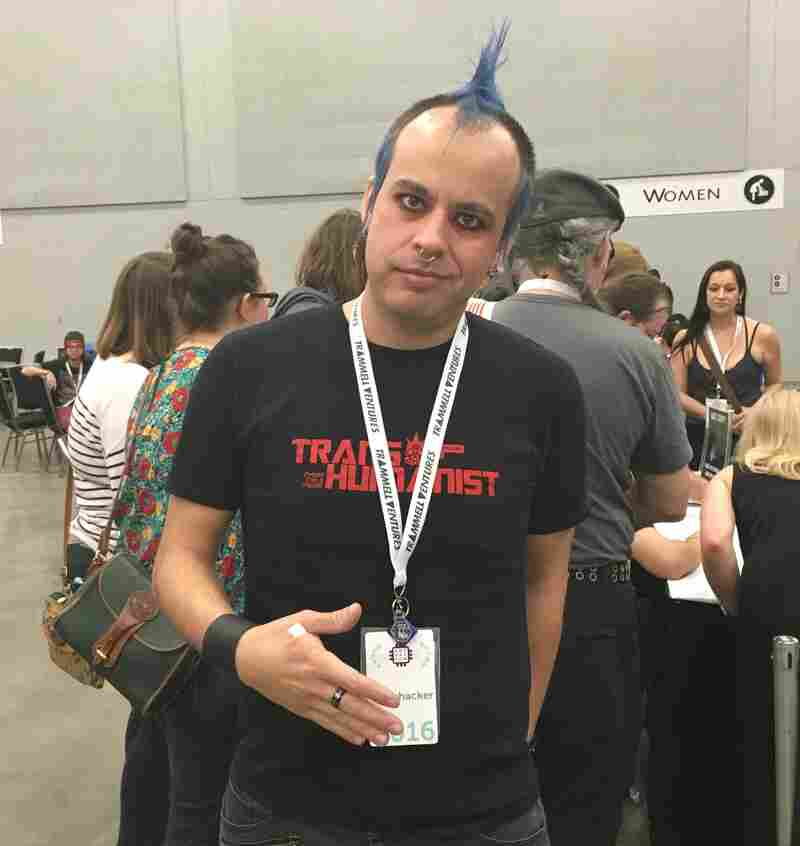 The implantable RFID chips hold encrypted information, and their unique ID numbers can be used to open doors or unlock the owner's smartphone, which is what Butt wanted to do.

Butt took a deep breath. The needle plunged into his skin at the base of his thumb, and a chip bigger than a grain of rice slipped just below the surface.

Across the way, Sasha Rose, who was working a meditation booth at the convention, watched the people line up to be "chipped."

She shook her head: This was the craziest thing she had seen. She wondered about Graafstra's credentials. She thought this was a medical procedure, so should he be performing it? Did his clients know the potential consequences of carrying personal information on a device inside their skin?

"More than the crazy concept, it's actually people's willingness to accept it. That's why it's crazy to me," Rose said. "People are just willing to just line up and go, 'Yeah, stick that in me.' "

At night, many of the convention-goers gathered at a club on Austin's Sixth Street.

Graafstra was outside with Ryan O'Shea, whose company Grindhouse Wetware made the Internet squirm earlier this year when it released a close-up surgery video of one of its implants called Northstar. In it, a man gets a small incision in his hand, and then, with a metallic tool dipped into it, the skin is lifted to produce a cavity where a round subdermal implant with five LED lights is placed.

The result looks dystopian — the incision is stitched with black thread, and LED lights make the skin on the hand glow red.

But body hackers view the world differently, Graafstra said. They believe technology has reached a point where it can improve the human body instead of just fixing what's broken. 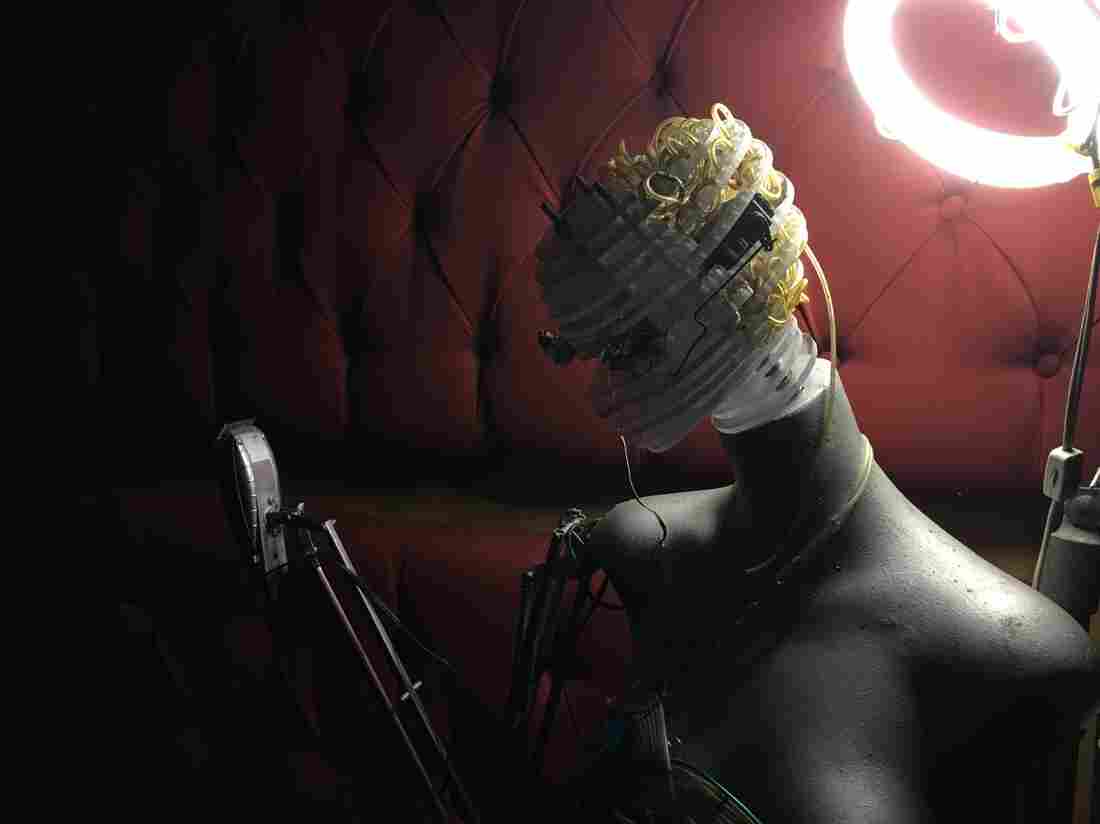 A piece of art on display during a BodyHacking Con party in Austin. Eyder Peralta/NPR hide caption

That kind of future — where the human body is augmented by technology — is the goal of many of these experiments.

O'Shea said Grindhouse Wetware is using its LED device to test how long a device like it can remain charged inside a body, and Graafstra said his RFID chip is a small attempt at merging digital identity with physical identity.

"I think once people realize, 'Oh, it's OK that my grandma has a pacemaker' ... people are going to start to accept this," O'Shea said. "You know, the era of transhumanism, I would say, is here. So let's accept that and then see where that logically takes us."

Inside the club, a drone hovered above the dance floor. The polished steel and the electronic dance music gave it a futuristic feel.

Standing near the bar was Tony Salvador, who studies social values and how they affect technology at Intel. He was at the conference to get a feel of when and if "body hacking" may be accepted into the mainstream.

If we define ourselves as organisms, suddenly our group is wider.

Neil Harbisson, in a keynote at a body hacking conference

Sometimes, he said, technology moves too fast and outpaces accepted social boundaries — not to mention laws. He argued that was part of the reason why early wearers of Google Glass were called "glassholes."

"It created a social misunderstanding," Salvador said. "You didn't know what was going on."

To Salvador, the boundaries of acceptance are a matter of our social philosophy, an area that he argued was driven by esoteric discourse without tangible moral and ethical recommendations.

The philosophers, he said, are letting us down.

Alva Noë, a philosopher at the University of California, Berkeley and a contributor to NPR's 13.7: Cosmos and Culture blog, has written extensively on what he calls "cyborgian naturalness." He disagreed that the modern philosophers dropped the ball, saying that tackling the matter would involve unpacking two questions:

To the first question, Noë said he found the "body hacking" experimentation on humans "ethically disturbing" and couldn't fathom a doctor or any other scientists conducting these kinds of operations.

The second question was more complicated.

"We don't condemn people for using glasses to see better," he said. "But we do start to think taking speed to cope with your work life is questionable."

Because those kinds of judgments are an ethical question, drawing a tolerance line may always be a moving target, he said.

"We may reach consensuses and then lose them," Noë said. "Just as there was once a consensus where it was OK to smoke to function effectively, and now we have the consensus that, increasingly, it's not OK to do that."

If there's a rock star in the body-hacking movement, it's Neil Harbisson, a colorblind artist from Barcelona who persuaded a doctor to implant a camera in the back of his head. The antenna, as he calls it, essentially lets Harbisson listen to colors by detecting the dominant color in front of him and translating it into musical notes. 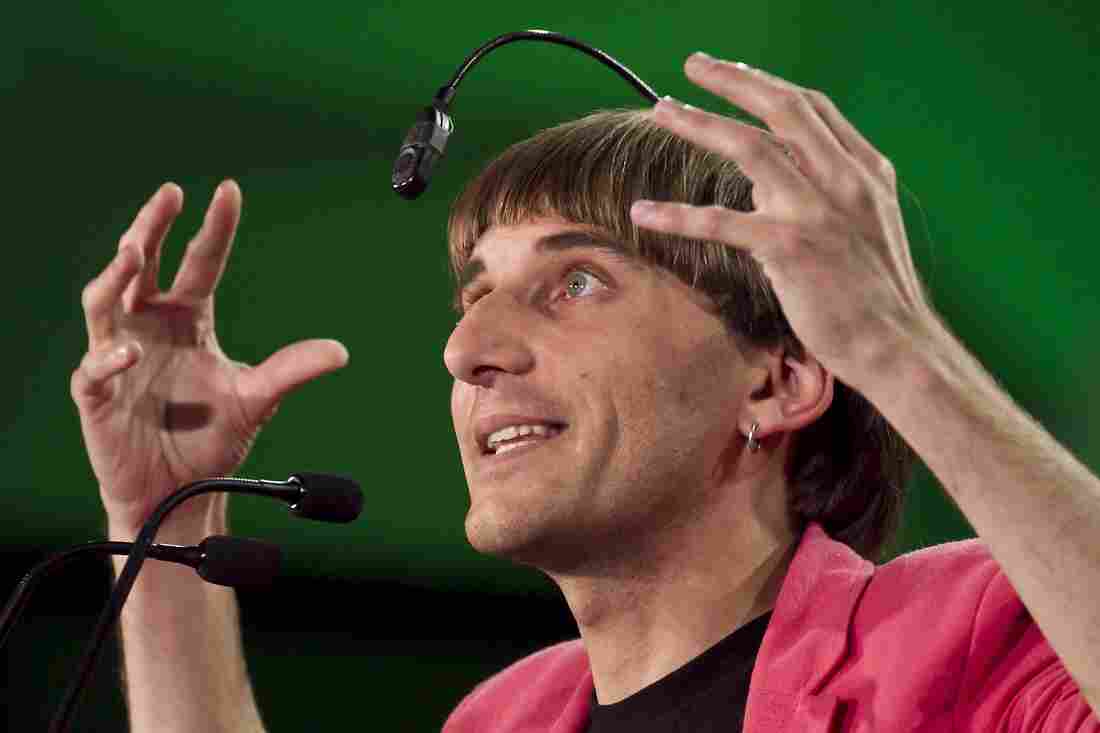 Neil Harbisson, an artist from Barcelona, has a camera implanted in the back of his head, which he says allows him to listen to colors. Luis Ortiz/LatinContent/Getty Images hide caption

The way he tells it, a medical ethics committee in Europe had refused to sign off on the operation, but a doctor agreed to perform the surgery anonymously. From it, Harbisson emerged with a camera connected to a device on the back of his skull, its lens dangling in front of his face on a rod that arcs over his head.

In his keynote address at the conference, Harbisson said the first time he heard those colors in his sleep, he felt truly cyborg. Now, he no longer identifies as human but as a "cybernetic organism."

"If we define ourselves as organisms, suddenly our group is wider," he said. "We are on the same level as an insect, or as a cat, or as a plant."

Harbisson is well aware of how the world perceives him. He moved from Barcelona to New York City in search of "peace" with another friend in the transhumanist movement, Moon Ribas. Ribas has an electronic device in her arm that she said vibrates when there is an earthquake anywhere in the world.

On more than one occasion, people have tried to rip off his antenna, Harbisson said. That's part of the reason why he co-founded the Cyborg Foundation to advocate for "cyborg rights."

When asked if he's ever thought about just taking the antenna off, Harbisson demurred.

"To me, it's much stronger, the wish to sense what's around me, than the fact that people keep annoying me," he said, adding that maybe, in the future, as others get new senses, he'll be considered normal.