Accessibility links
In Sync: Is Sharing Your Online Calendar A Relationship Milestone? : All Tech Considered Like a first date, sharing a calendar can be a big milestone in a relationship. Some say it makes coordinating complicated lives easier; others think it's weird to keep such close track of each other. 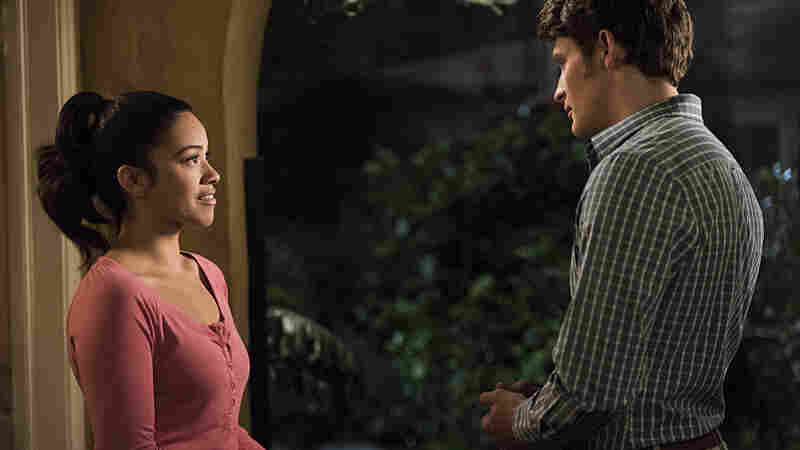 Gina Rodriguez as Jane and Brett Dier as Michael in the popular TV series Jane the Virgin, in which a shared online calendar was a plot point. Tyler Golden/© 2016 The CW Network, LLC. hide caption 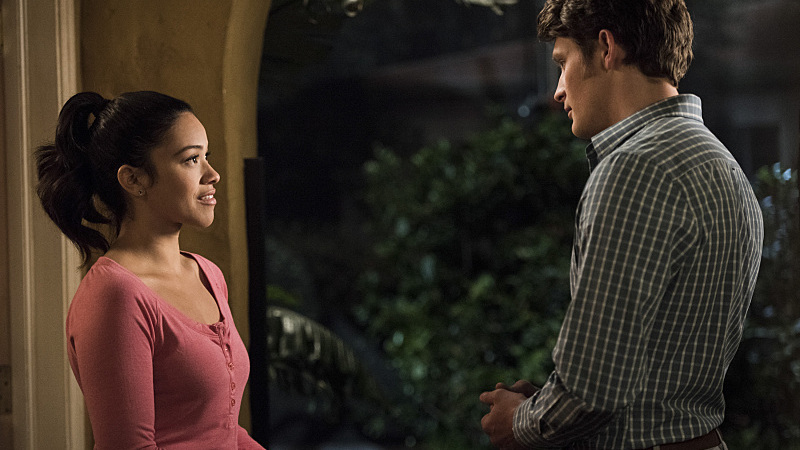 Gina Rodriguez as Jane and Brett Dier as Michael in the popular TV series Jane the Virgin, in which a shared online calendar was a plot point.

People in love have always savored their relationship milestones: the first date, the first I-love-you's, meeting each other's families.

Modern relationships come with their own special milestones, like swapping Wi-Fi passwords, becoming Facebook official, taking down your online dating profiles, and increasingly often, choosing to share your online calendar.

These days, more couples are discussing whether to make their online calendars visible to each other. It was even a plot point in the pilot episode of Jane the Virgin. The upside to being calendar connected: You can avoid pesky scheduling conflicts. The downside: It can feel kind of intrusive and kind of unromantic.

Sharing your online calendar with a loved one is:https://t.co/zop2DpGsOD

How Many People Are Calendar Connected?

A 2014 Pew Research Center study found that 11 percent of couples share an online calendar. That's not an accurate measure of what we're calling calendar connectivity. The difference in the language is small, but significant. Making your online calendar visible to your partner is not the same thing as having one online calendar that both of you share

The study also found that 27 percent of committed couples share an email address. "Older adults and those who have been in their relationship for longer than ten years are especially likely to share an email account," Pew said.

To get a better idea of how many couples are calendar connected, I tapped into my own social networks to do an informal survey. It was anecdotal, completely unscientific and highly informative.

So far, around half of all couples surveyed (about 30 people answered, all under 40) said they share their online calendars with each other. Fifteen percent of the respondents said they aren't currently calendar connected, but wouldn't mind if their partner asked. A quarter of the people I asked think sharing your online calendar with your partner is really weird.

From a technical standpoint, it's very easy to make your calendar visible to your loved ones. But psychologically speaking, figuring out whether you want to share that much information can be a complex decision. 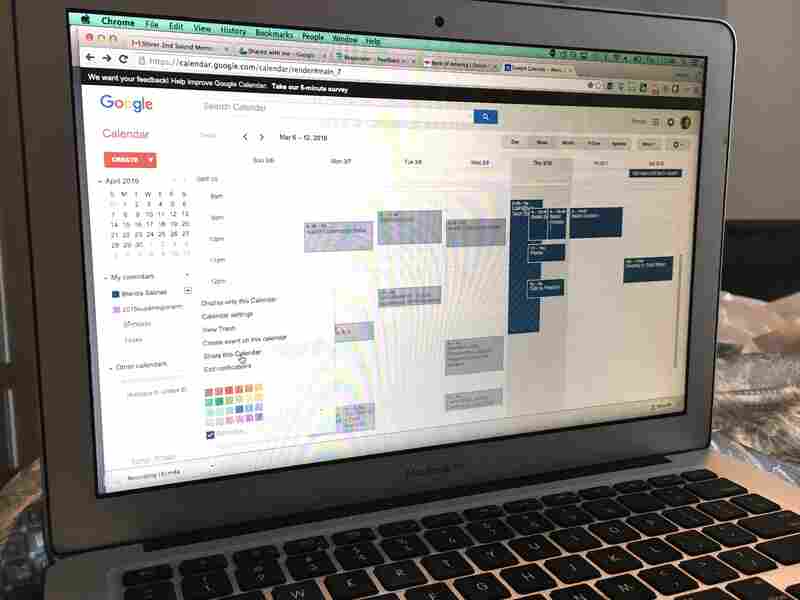 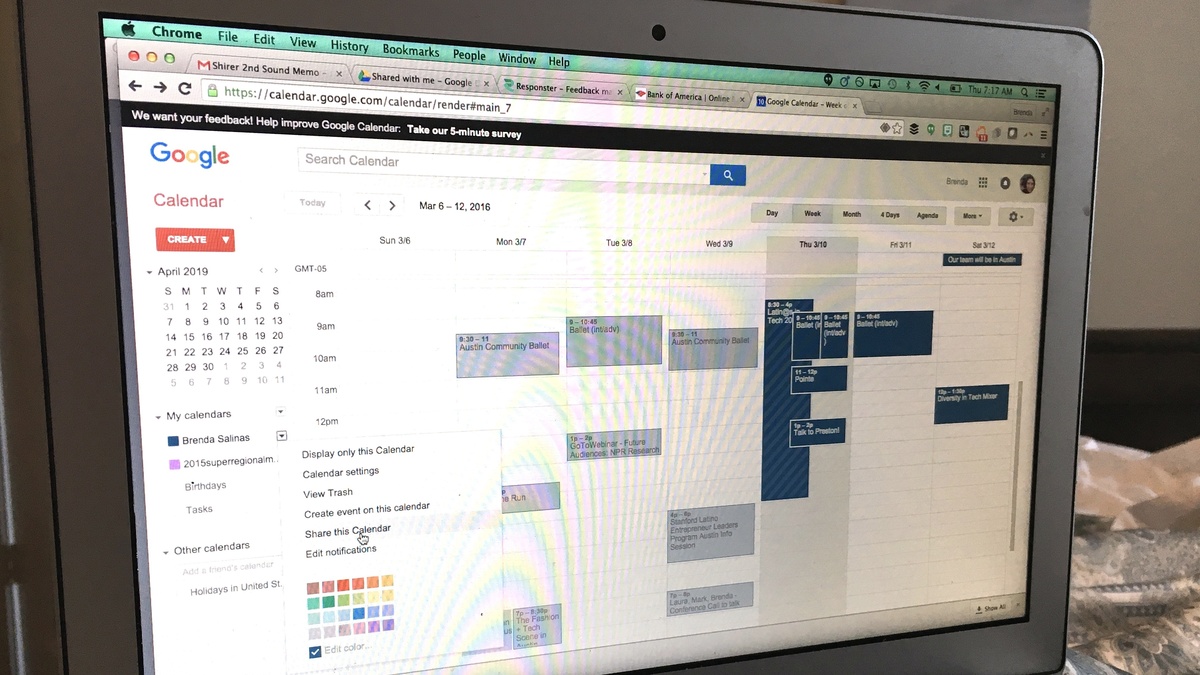 Do you really want to know where your partner is at all times? Do you want them knowing where you are?

In the informal survey, some respondents said that being calendar-connected helps keep the peace. "It worked for me and my fiancé," Krystina Martinez of Denton, Texas, replied. "When we began dating, our schedules were all over the place, so it helped us find the time to see each other."

New York city resident Aurora Almendral and her partner have even managed to find a little romance in syncing their calendars. "The calendar is another layer of connection we have during the day. We often put flirtatious 'appointments' there for the other to find," Almendral says.

But for a lot of couples, sharing calendars feels a little strange. "I find that a little too stalker-ish for my tastes," Allyson Michele of Santa Fe, N.M., says. "I get it if there's an important appointment or event you both need to go to, but I don't understand why anyone would need to link calendars at all times."

Sara Paul of Austin, Texas, says "it can definitely lead to snooping if one or both of the partners in the relationship are the jealous type."

A few passionate respondents were firmly against calendar connectivity. "Adults should be able to function without knowing where the other one is every second of the day," says Paige Suffel of Houston. "If he wants to know what I'm doing, he can ask."

A Warning From An Expert

Syndicated advice columnist Dan Savage is in the camp strongly against calendar connectivity. "Maintaining some distance — maintaining some degree of mystery and autonomy — is key to sustaining a romantic and sexual attraction over the long haul," he says. Syncing up your online calendars is counterproductive to that goal, he says, "unless you're not interested in long hauling the person you're currently seeing, in which case, merge those calendars."

For some couples, a shared calendar is just a jumping-off point. There are dozens of mobile apps designed to keep couples organized. The apps have different features centered around a shared calendar but also include to-do lists, grocery lists, digital scrapbooks, conflict resolution tips and GPS trackers. And for couples that are no longer couples, there are calendar apps to help sort out custody agreements.

Is syncing calendars the new Facebook official? A quarter of the respondents to the informal survey said they consider sharing their calendar a relationship milestone.

"I think it's a great idea, but only for couples who have been together for a substantial amount of time (whatever they consider that to be)," Katherine Briggs of Los Angeles says. "My partner and I have been going on for seven years, we both have hectic schedules, and we're happily (almost) living/breathing extensions of each other."

Michael Spitzer-Rubenstein started sharing his calendar with his girlfriend after she forgot that his parents were coming into town one weekend. Even though the Brooklyn resident sees being calendar connected "mainly as an utilitarian thing," there is the occasional head-scratcher. "There are sometimes events on the calendar where I don't know what it refers to because I'm not the only one adding events to my calendar," he says.

Spitzer-Rubenstein says in 2016, being calendar-connected is a milestone. "In my relationship, it came after we were already engaged and it just made things easier."