Accessibility links
Oculus Rift Launch Makes A Splash. Will It Lead A Wave Of VR Tech? : All Tech Considered After four years of hype, the Oculus Rift hits the market Monday. It's just one of several virtual reality systems — but not all the VR gadgets are up to snuff. 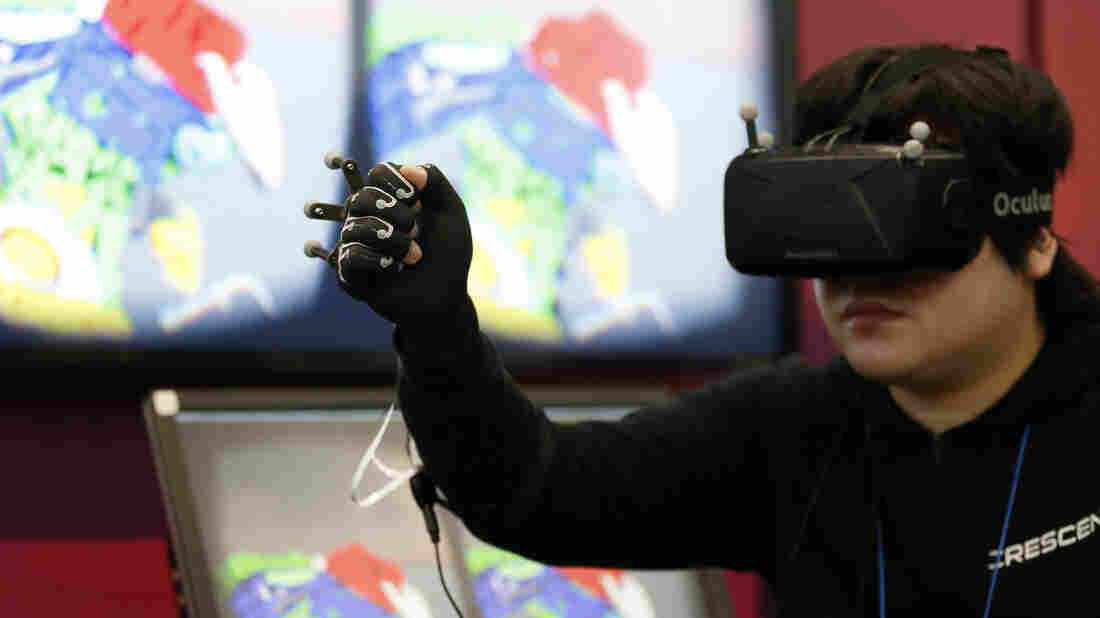 An attendant wearing an Oculus Rift virtual reality headset demonstrates a glove with a Yamaha Corp. rubber-like sensor at the Wearable Expo in Tokyo, on Jan. 13. Bloomberg via Getty Images hide caption 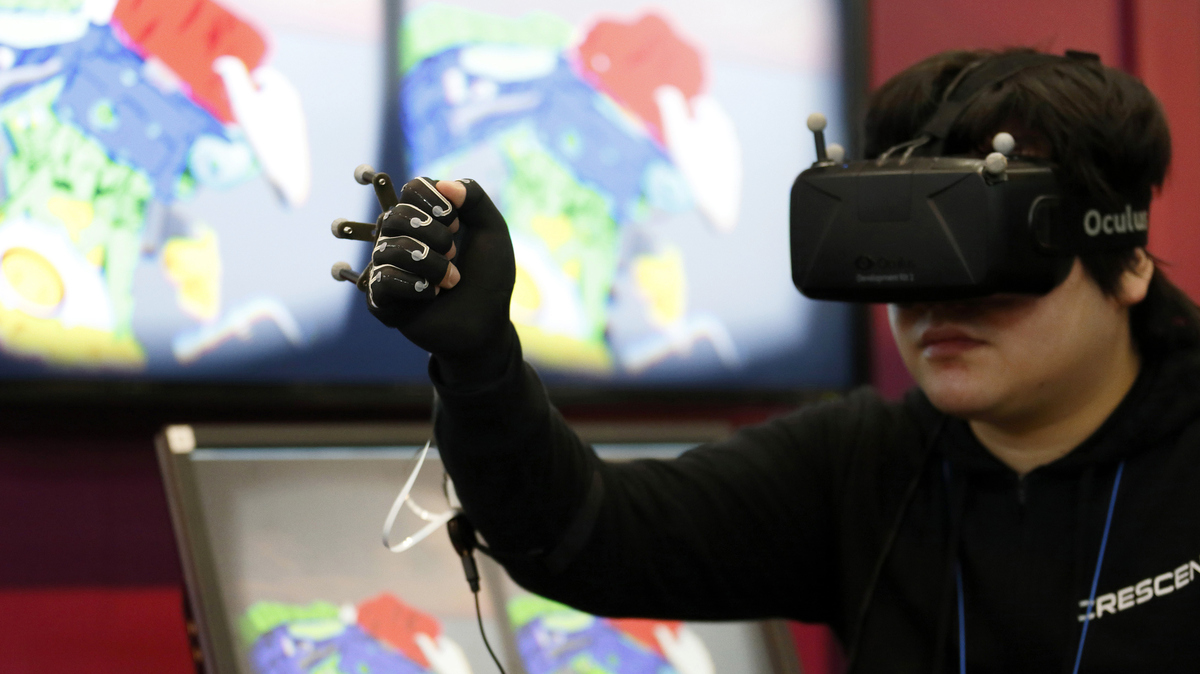 An attendant wearing an Oculus Rift virtual reality headset demonstrates a glove with a Yamaha Corp. rubber-like sensor at the Wearable Expo in Tokyo, on Jan. 13.

Today's launch of the Oculus Rift is the first of three high-end virtual reality headsets hitting the market this year. The HTC Vive will be out next month and Sony PlayStation VR will be available in the fall.

Since 2010, $4 billion has gone into virtual reality, according to market analyst firm PitchBook, and tens of millions of dollars are pouring into companies that make content for those headsets. Over the past couple of years, I've tried every experience I could get my hands on — most recently in Austin at the South by Southwest conference.

The experiences were varied in quality and length. But, most felt more like experiments than full blown products. It seemed almost like the early days of film when the Lumiere brothers' 50-second "documentary" The Arrival of a Train at La Ciotat Station was revolutionary. The 1896 film showed off new concepts like long and short shots. But is was merely a glimmer of what film would become.

Virtual Reality Whiz Palmer Luckey: Future Will Be 'More Boring Than We Think'

Getting 'Physical' And Emotional In Virtual Reality

Is Oculus Rift's $600 Price Too High For Virtual Reality To Succeed?

At SXSW there were several halls filled with people who had clunky VR headsets strapped on — laughing, smiling, and gasping to themselves at the novelty of the content.

Virtual reality is kind of trippy — you put on these heavy goggles and suddenly your eyes are telling you that you're in a different place filled with life sized 3-D images. VR studios like Master of Shapes took advantage of this dreamy quality.

"We worked on Orange Sunshine VR. It's the supplemental piece to a film that's coming out this week about the first real group of hippies in Southern California," says Glenn Snyder of Master of Shapes.

Not surprisingly these hippies thought that LSD could bring about spiritual transformation.

I sat down on some pillows in a screened off area and strapped on an HTC Vive. Before I knew it I thought I was sitting around a den in a mid-century modern house with a group of people. Suddenly, the table at the center bursts into flames and melts in front of me and then turns into a campfire in the desert. It was indeed, very "trippy" even though it only lasted three minutes.

I had an opportunity to try a social experience that took place around a swimming pool. This one also used the Vive, which unlike the Oculus has hand paddles you can use that make it seem as if you're moving your hands in the virtual world. Though it wasn't connected, it showed how a friend could dial in to join me. Then, I could use my hand paddle to clink glasses of champagne together.

Perhaps one of the more enjoyable experiences I had came from Presence Labs and it was geared to music lovers. It's already available for people who own the much lower level Samsung Gear VR. The Gear works when you insert a Galaxy phone into the viewfinder.

The experience is called GrooVR and Steve Shaw of Presence calls it "music-driven virtual reality." 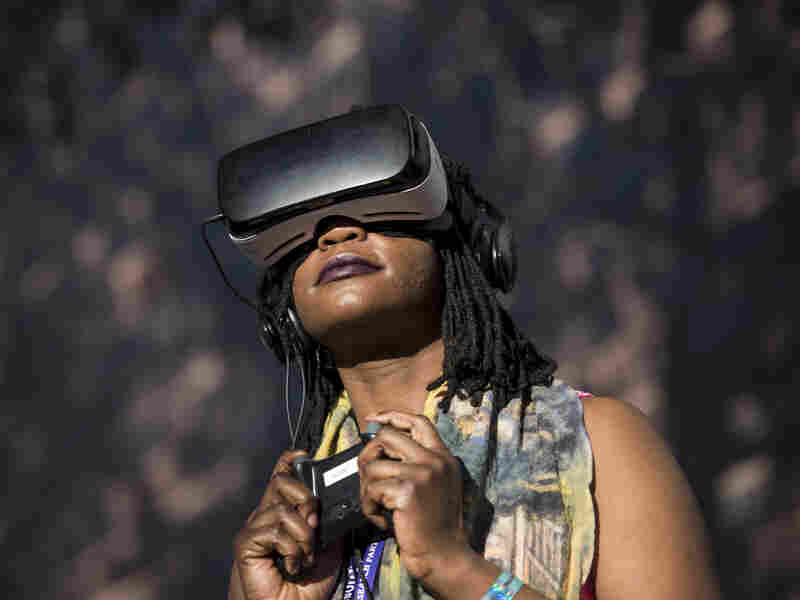 An attendee tries a Samsung Gear VR headset during the South By Southwest Interactive Festival in Austin, Texas, on March 12. Bloomberg via Getty Images hide caption 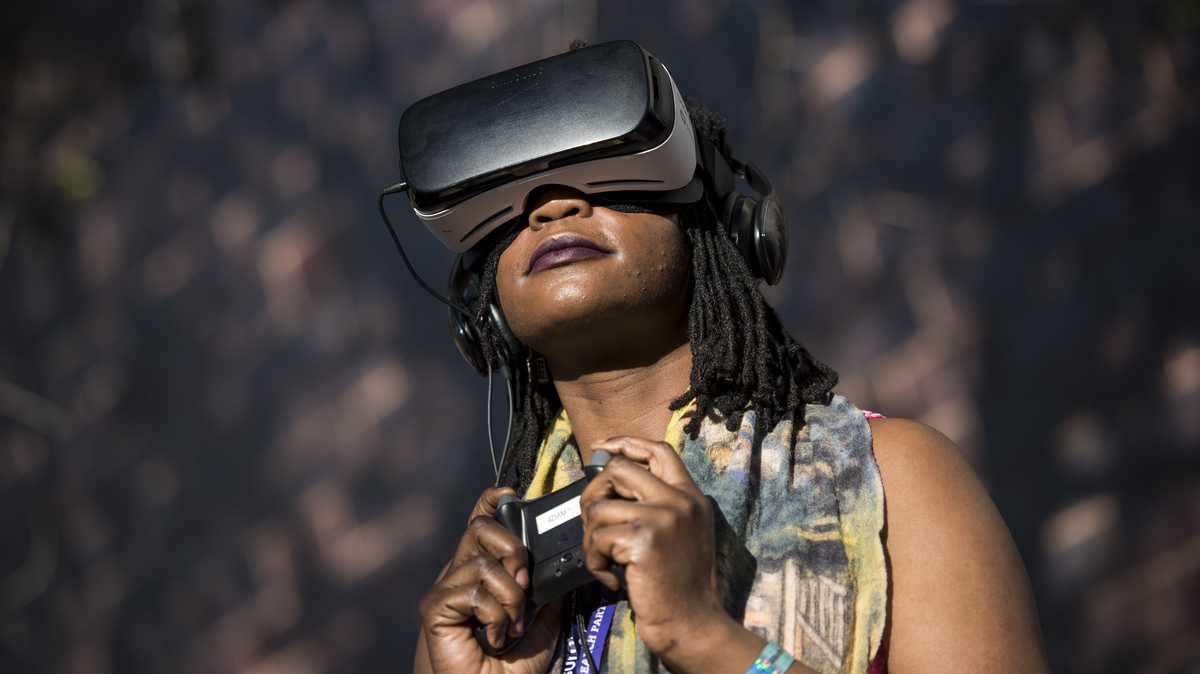 An attendee tries a Samsung Gear VR headset during the South By Southwest Interactive Festival in Austin, Texas, on March 12.

It was a lovely. Shaw had it connected to Spotify and I listened to EDM as a series of 3-D immersive images passed before my eyes. In one of them I was a small being floating around a world of large colorful flowers and green plants. In another I was floating across a placid lake as clouds changed colors and shapes. It reminded of what the Beatles' Yellow Submarine cartoons would have been like if VR existed then.

But Oculus and its owner Facebook are aiming for the game market with the initial launch. At other venues I tried demos of games like Adrift and Eve: Valkyrie. They were fun and immersive. But, I wasn't sure that any of these experiences would be enough for me to drop $599 on the headset and another $900 or so for a computer powerful enough to use the Rift. Or alternatively $799 for the HTC Vive.

That's why Michael Pachter, an analyst with Wedbush Securities, thinks Sony VR, which will sell at $399 will have the edge initially because it works with a PlayStation 4.

"You're going to get a lot of people popping for $399.00 who already have a PlayStation 4," says Pachter "And that number is about 40 million right now and will be 60 million a year from now."

But, in the long run, Pachter thinks as the technology develops the Oculus could do very well. Facebook spent $2 billion buying the company and he believes it will support Oculus for as long as it takes to perfect the technology and bring down the price.

And as the price goes down, the technology and the content are also likely to get better and more useful.