Accessibility links
After FBI-Apple Clash, A Mom Asks: Who Will Unlock Murdered Daughter's iPhone? : All Tech Considered The FBI says it's unlocked the iPhone used by one of the San Bernardino shooters. A district attorney in Baton Rouge, La., is hopeful the FBI will share its master key for an iPhone in a murder case. 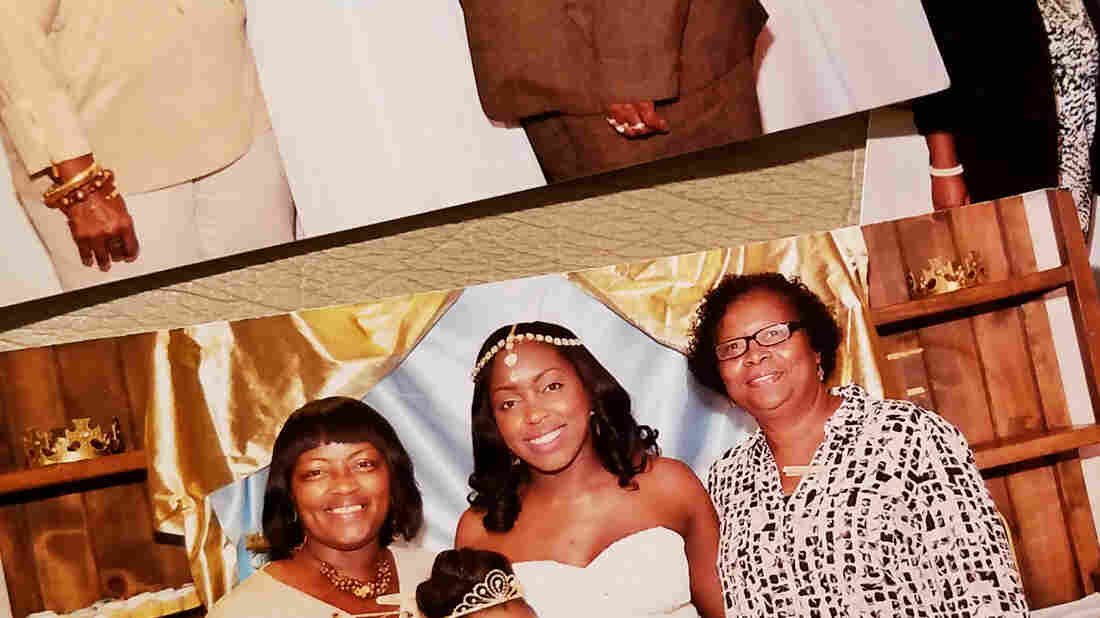 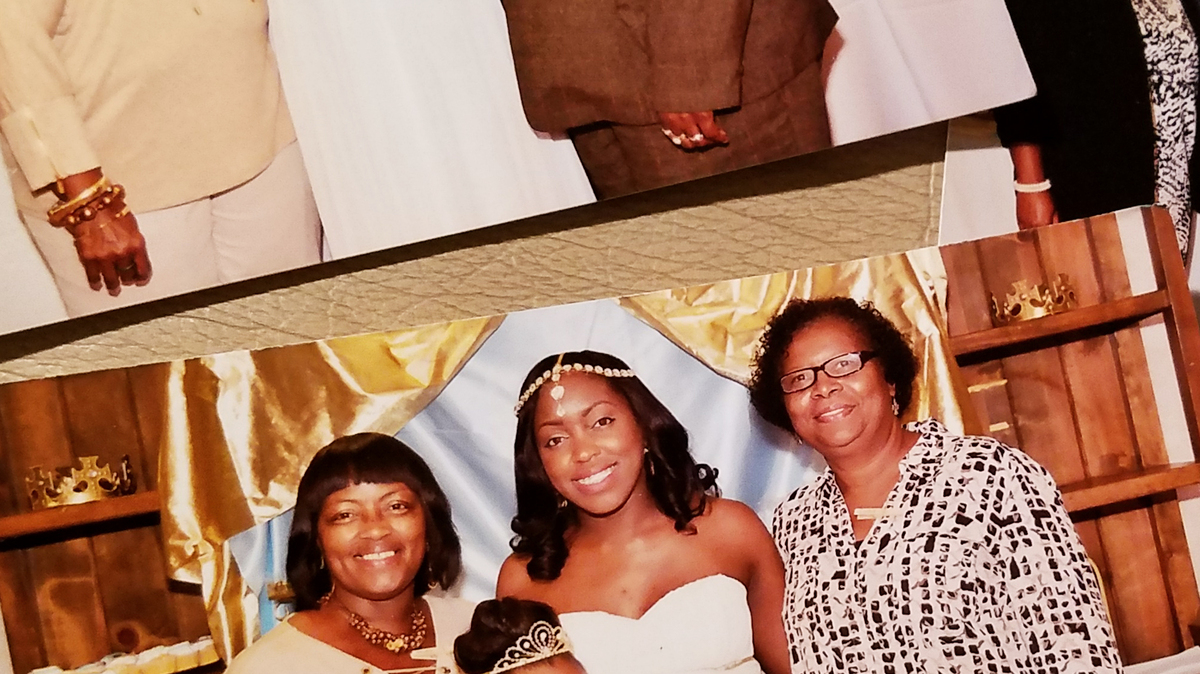 Brittney Mills (center) stands with her mother, Barbara (left), and a family friend at her baby shower days before Brittney was killed.

The FBI says it has gotten into the iPhone used by one of the San Bernardino shooters in California, so prosecutors have dropped their case trying to compel Apple to do it. But the controversy is far from over. Local prosecutors across the country have iPhones that they would like to unlock, and they want to know if the FBI will use its master key to help.

In one case in particular — an unsolved murder in Baton Rouge, La. — a district attorney expects an answer at any minute.

Brittney Mills was pregnant, almost full term. Every once in a while, she and her 9-year-old daughter would crash with Grandma, get some TLC. But that particular evening, Brittney wanted to go home and sleep in her own bed "so she could be comfortable."

The elder Mills told Brittney, "Call, if anything" — by which she meant if Brittney had contractions. Sure enough, Mills did get a call, around midnight. It was some kind of emergency worker who told her to come over. 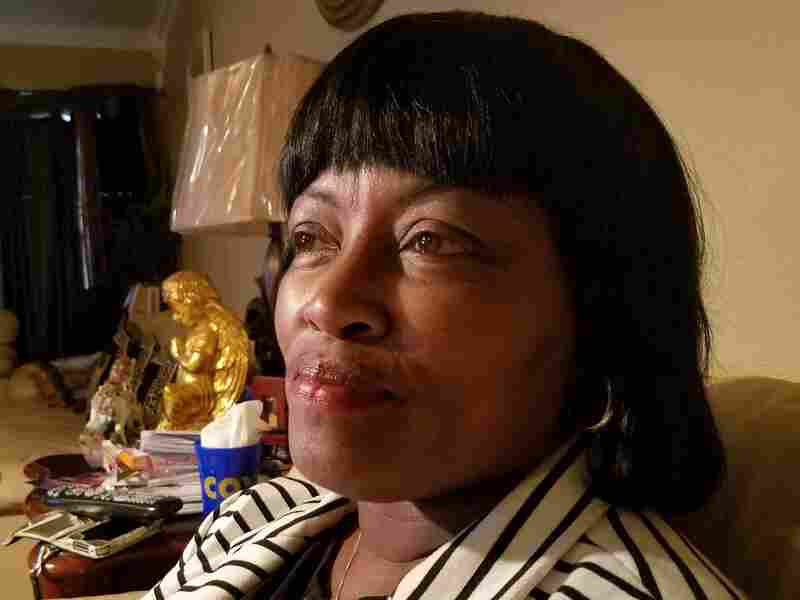 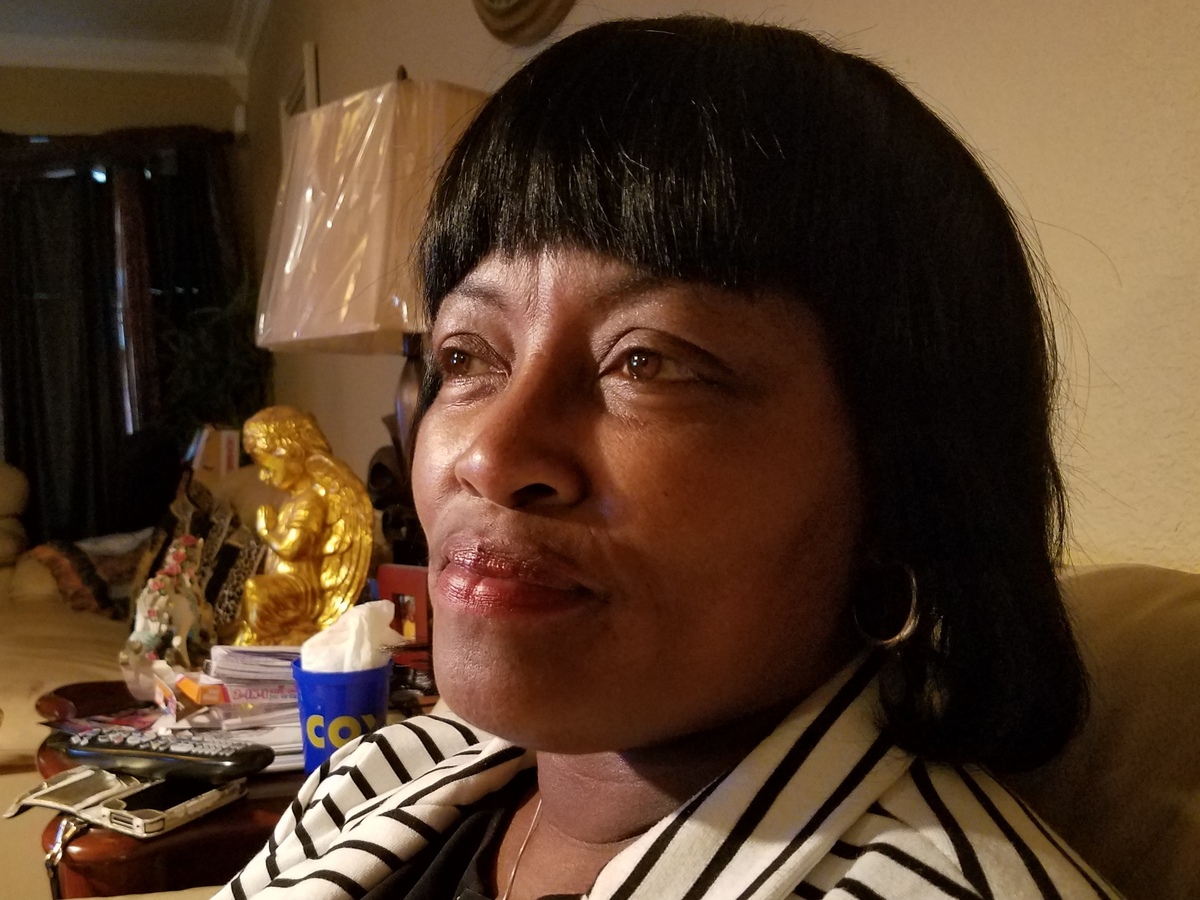 "I went to her apartment. I had no idea what had happened. As a matter of fact, I thought her water had broke. And we were going to deliver a baby."

Mills arrived and saw police tape cordoning off the entryway. Brittney's home was a crime scene. An officer told Mills: Her daughter had been shot. Go to the hospital.

When Mills arrived there, her daughter was still alive — in an operating room. Doctors took her in for a C-section.

"From what I understand, they resuscitated her and she was alive long enough for them to do the C-section. Yeah, that's what the doctors told me."

Brittney Mills gave birth to a baby boy. And then, she died. She was 29.

The baby came out quite big: 8 pounds, 8 ounces. Mills smiles as she recounts that detail. And, she says, she was grateful to God for his life. "It took us about three days to come up with a name. And I felt like we should name him, well, after Mommy, because we really were in high hopes that he would survive."

But Brenton — named after Brittney — couldn't breathe on his own. After a few days on a ventilator, he died. Mills, who a short time before had been expecting a grandchild, got a double homicide.

Today, nearly a year later, she's raising Brittney's surviving child, and her dining room remains a memorial of sorts. She shows me Brittney's photographs and funeral programs. And I notice in the corner there's a cradle. "That was his," she says.

The question of who shot Brittney Mills is wide open. And the answer could be locked up in an iPhone — her iPhone.

Unlike in the San Bernardino case, this iPhone's owner is the victim, not the perpetrator. But like that case, investigators are not able to enter the phone. It's an iPhone 5s, running on the iOS 8 operating system, so the data inside are encrypted. And no one can get in without the password.

Barbara Mills saw Apple CEO Tim Cook on TV the other day, talking about the rights of consumers. To privacy activists, he's a hero. To her, he's not.

"You still trying to protect consumers, but what about the victims who used your product?" she says. "They were faithful, too. They paid their bills."

According to family members, Brittney Mills kept a diary on her phone, in some app, which could be very useful to investigators. They haven't been able to name a single suspect yet. 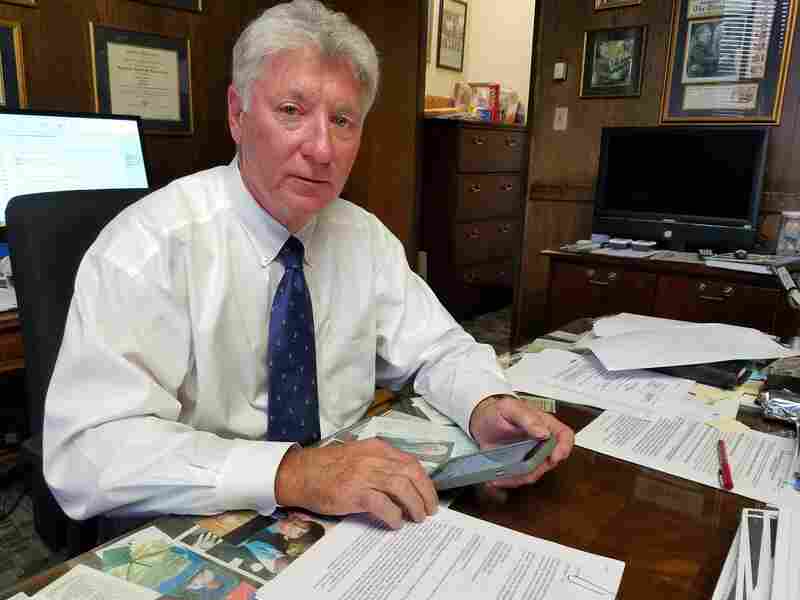 East Baton Rouge District Attorney Hillar Moore, who wants Apple or the FBI to unlock an iPhone 5s, has a stack of articles about encryption on his desk. Aarti Shahani /NPR hide caption 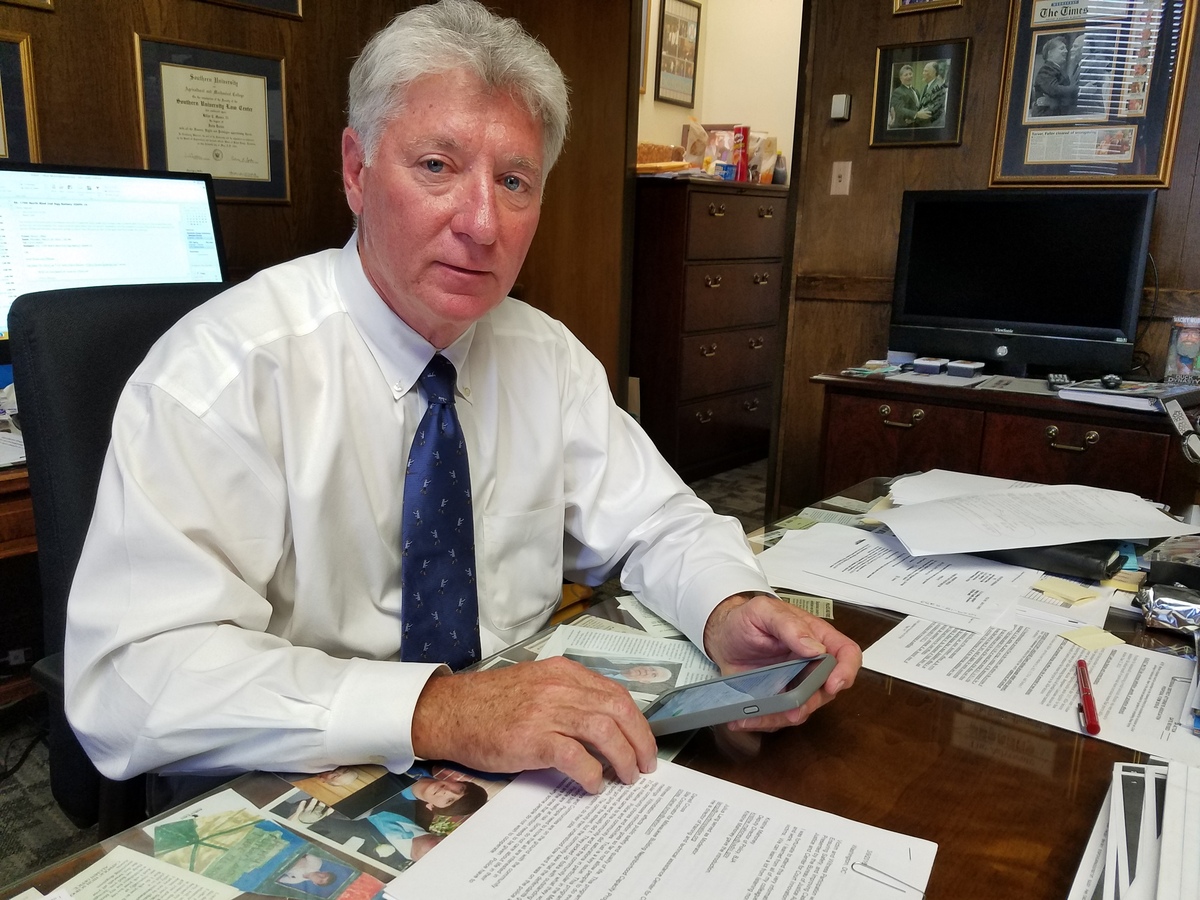 East Baton Rouge District Attorney Hillar Moore, who wants Apple or the FBI to unlock an iPhone 5s, has a stack of articles about encryption on his desk.

Sitting at the conference table in his office, East Baton Rouge District Attorney Hillar Moore explains just how thin the murder scene was: "The daughter heard someone knock on the door and heard her mom speak to somebody, who she was not able to identify. After the shots rang out is when the daughter ran for safety."

Moore says the little girl ran into the bathroom and locked the door.

Brittney Mills lived on the ground floor of a small apartment complex in a nice part of town. None of the apartments — not No. 3, where she lived, or Nos. 1 or 2, had any sign of a forced entry.

"The critical thing is she opens the door," Moore explains.

And it looks like the shooter didn't enter the apartment, didn't rummage inside. "No gun left, no gun found. We really are desperate to try to get into the phone, just to see if there's anything else there," he says.

Investigators were able to get AT&T, the mobile carrier, to provide a call log — every number that called or texted Brittney, or that she contacted — but not what was said inside a text.

Apple turned over data stored on iCloud — like, 15,000 pages worth of data, according to prosecutors. But the account stopped backing up months before the murder, and that could be for any number of reasons, so the data ended up being outdated.

Moore says if his side had been able to get the contents of Brittney's phone early on, those critical first contacts they made could have been more fruitful, extracted more clues, "because you generally have one shot at speaking with folks — potentially people that are suspects or targets. You generally get one shot. They come in and talk to you without a lawyer."

After that, they lawyer up. His perspective makes perfect sense for police, and also raises clear civil liberties issues.

The Mills case — this journey of having a locked iPhone, trying to figure out how to unlock it — happened around the same time the San Bernardino shooting investigation was unfolding. That catapulted the family and the DA into a movement among law enforcement that they didn't realize was happening, to tackle the problem of encryption.

Moore found himself in closed-door meetings with the Secret Service and other prosecutors. And on the day of a hearing before the House Judiciary Committee, where the FBI director and Apple's top lawyer testified, Moore was in Washington, D.C., meeting with three Apple employees. The point was to explore how they could help with the locked iPhone.

"I have not heard back since," he says. "So I assume that they're still trying to work on Miss Mills' phone, or some type of replica, whatever they made."

Apple spokesman Fred Sainz says the company has provided all the information it has, and the ball is in the DA's court. He hasn't provided the follow-up information Apple requested. And Apple will not go so far as to try to break the encryption on Brittney's phone.

Getting The FBI's Help

When news broke last week that a mysterious "outside party" offered to help with the San Bernardino iPhone, DA Moore got in touch with an FBI agent on that case. "Both of our understanding is that if they're able to get into that phone, that they can probably get into Miss Mills' phone, which hopefully will benefit us one way or the other."

In an email, a law enforcement official tells NPR it's "premature to say," but they are "committed to helping" state and local partners gain lawful access to mobile devices.

Meanwhile Moore says he's been texting with the FBI all week. He's awaiting final confirmation, as well as details such as: If the hack does work, what fee will his office have to pay the feds or the outside party?