Accessibility links
Can Silly Patents Help Fight Frivolous Lawsuits? : All Tech Considered Critics of the patent system say it's too easy for people to save a slew of semi-realistic ideas, then sue when a firm separately tries to make something similar. A new website fights fire with fire. 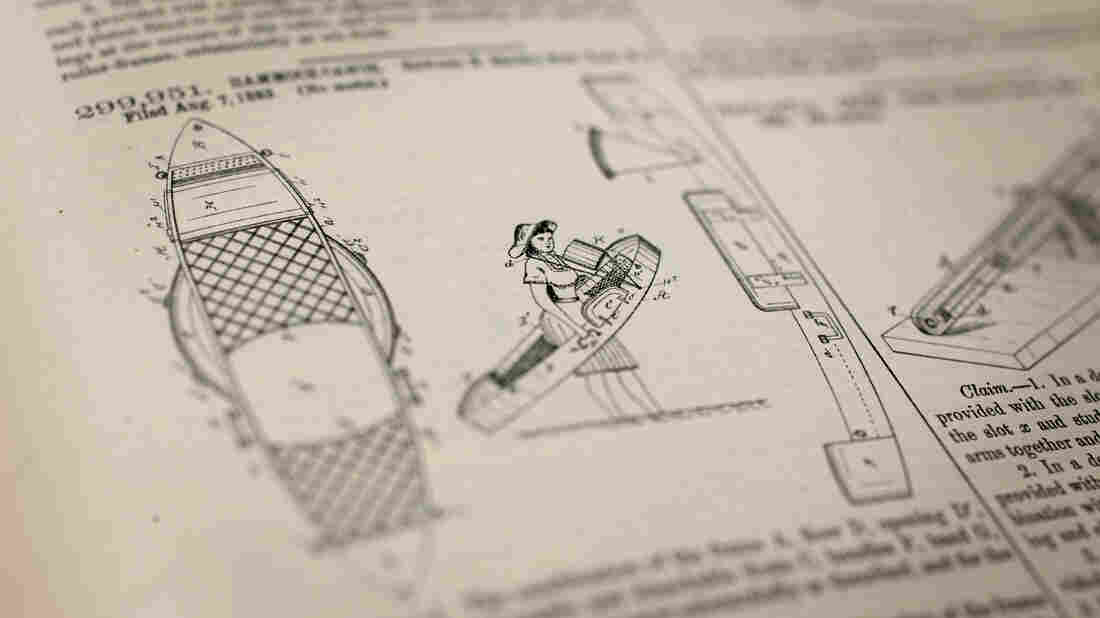 A hammock-canoe drawing, U.S. Patent No. 299,951, is displayed in a June 1884 publication of the U.S. Patent and Trademark Office in Alexandria, Va. Critics of the patent system say it's too easy for people to save a slew of semi-realistic ideas, then sue when a firm separately tries to make something similar. Bloomberg via Getty Images hide caption 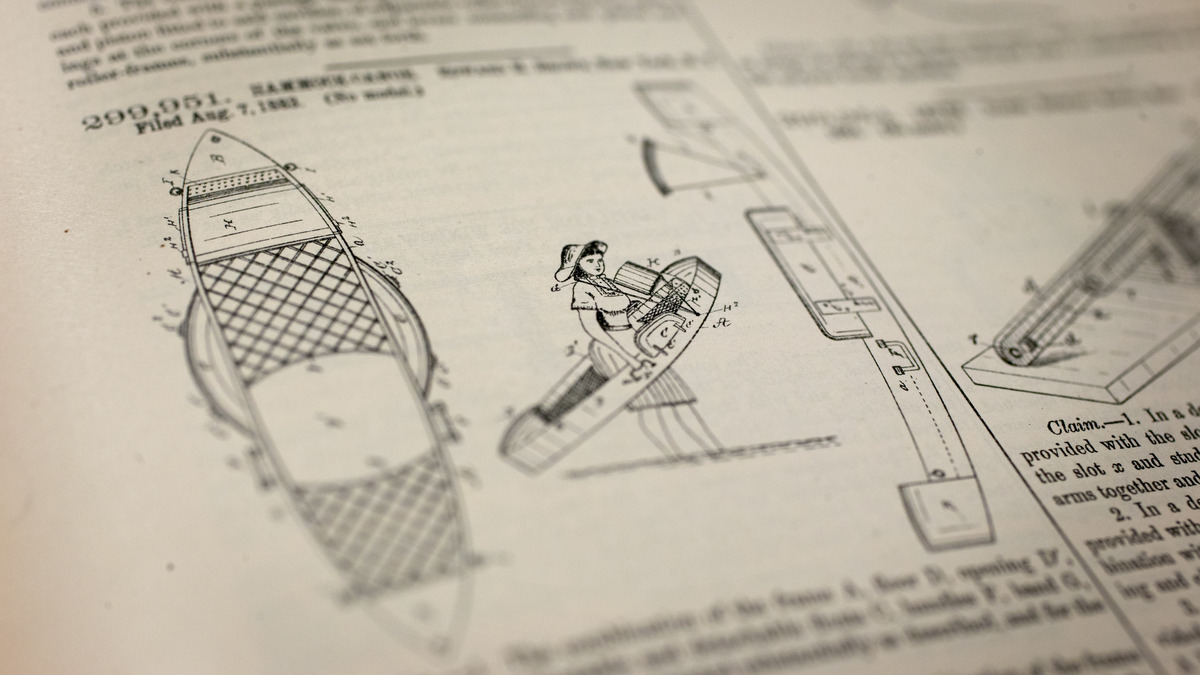 A hammock-canoe drawing, U.S. Patent No. 299,951, is displayed in a June 1884 publication of the U.S. Patent and Trademark Office in Alexandria, Va. Critics of the patent system say it's too easy for people to save a slew of semi-realistic ideas, then sue when a firm separately tries to make something similar.

Updated at 11:52 a.m. ET with a response from the U.S. Patent and Trademark Office.

Inventors and entrepreneurs have logged years of complaining about the patent system, and there are some good reasons. In 2015, patent litigation rose 13 percent from the previous year according to a study by Unified Patents, and two-thirds of those suits were brought by nonpracticing entities, or so-called "patent trolls."

Trolls don't make products — trolls buy up patents so they can sue companies that do actually make products. Given that patents on an invention last for 20 years, that's plenty of time to bring a lot of lawsuits. Critics of the system say there are too many frivolous patents.

Critics of the patent system say frivolous patents are the fuel for trolls to bring frivolous lawsuits. Most companies just settle with such patent trolls, because it's cheaper than going to court.

Frustration with the patent system is what prompted inventor, artist and MIT-trained roboticist Alexander Reben to create All Prior Art, a website that algorithmically generates and publishes patent-troll-like "prior art."

A Sample From 'All Prior Art'

"Blocks and clusters are brought to correspondence thereby to erase blocks of memory area efficiently. In the present method, an asymptote of an upper or a lower edge of a line of printing words is obtained first. Screening methods that employ genetic packages such as bacteria and bacteriophages enable high through-put identification of ligand binding molecules. The shaft of the exercise machine extends through an eccentric hole in the cam."

If someone tries to patent an invention and the idea has already been published, the U.S. Patent and Trademark Office won't grant them a patent. Reben's project is trying to cut down on the number of frivolous patents by publishing lots and lots of ideas, and he thinks his database could be used by patent examiners to challenge frivolous patents.

An explanation on Reben's site says the system works "by pulling text from the entire database of U.S.-issued and published (unapproved) patents and creating prior art from the patent language. While most inventions generated will be nonsensical, the cost to create and publish millions of ideas is nearly zero — which allows for a higher probability of possible valid prior art."

Reben says his program generates about 36,000 new ideas a minute. But, it's a bit more than pure random words.

"The key is that I'm pulling language from patents that are already out there, and because of that you have a constrained data set," he says. "Once it's out there the onus is on the patent office to find the prior art."

Much of what's been generated so far by Reben's system is totally nonsensical. Yet some of the ideas may be silly but they do make some sense — after all, the language is coming from the database at the USPTO.

Consider the "fuel-injected baby diaper": It's not clear what it is, but it may make as much sense as an "apparatus for facilitating the birth of a child by centrifugal force."

Daniel Nazer, the Mark Cuban Chair to Eliminate Stupid Patents at the Electronic Frontier Foundation, a high-tech civil liberties group, is amused by Reben's project — but he's not so sure it's going to help.

"The patent office looks for prior art when they review patents," he says, "but they tend to look in pretty narrow domains like published technical journals. ... Part of our work is to try and get the patent office to look more broadly."

Patent examiners may already be using the site, though: Reben sent NPR some data that showed that, in the three days since he launched his website, two visitors were from the USPTO.

Asked whether the agency would actually look at the All Prior Art site to help decide whether to grant a patent, USPTO Press Secretary Paul Fucito emailed this statement:

"High-quality patents enable certainty and clarity of rights, which fuels innovation and reduces needless litigation. To ensure we continue issuing high-quality patents well into the future, we established the Enhanced Patent Quality Initiative (EPQI). We are strengthening work products, processes, services, and how we measure patent quality at all stages of the patent process.

"In terms of wider access to prior art, the USPTO has a Third-Party Preissuance Submission program which provides a mechanism for third parties to submit patents, published patent applications, or other printed publications of potential relevance to the examination of a patent application with a concise description of the asserted relevance of each document submitted."

An earlier photo on this page showed a U.S. Patent Office document registering ownership of the name Grateful Dead, and the caption said band names are patented. Band names are protected by trademarks, not by patents.