Accessibility links
Uber Plans To Kill Surge Pricing, Though Drivers Say It Makes Job Worth It : All Tech Considered Uber is using machine learning to predict high demand, which would allow the app to schedule extra drivers instead of hiking rates at busy times. But such a change would hurt driver pay. 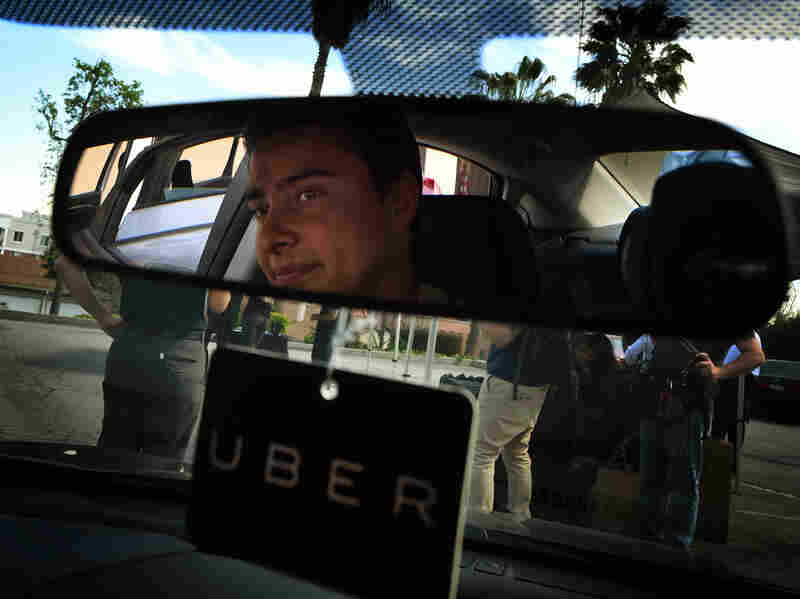 Jesse Vega checks out a vehicle at an Uber "Work On Demand" recruitment event March 10 in South Los Angeles. The company is researching ways to get rid of its surge pricing, a feature that drivers like but that can make costs unpredictable for consumers. Mark Ralston/AFP/Getty Images hide caption 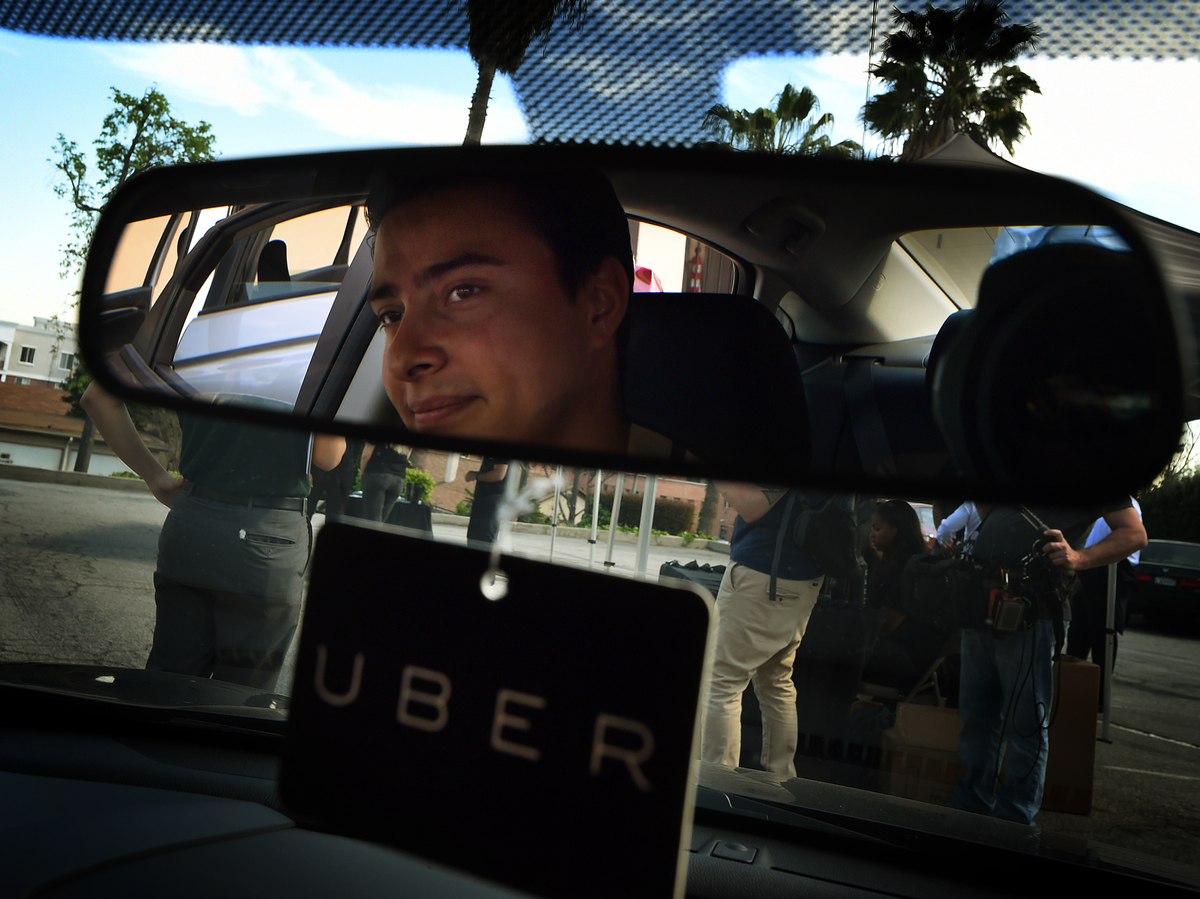 Jesse Vega checks out a vehicle at an Uber "Work On Demand" recruitment event March 10 in South Los Angeles. The company is researching ways to get rid of its surge pricing, a feature that drivers like but that can make costs unpredictable for consumers.

Sometimes you call an Uber, and what you thought would be an $8 ride is going to be two, three, even four times more — the result of greater demand brought on by a blizzard, or a baseball game. Whatever the reason, surge pricing is not fun.

It turns out Uber is working to fix it — or, should we say, end it. The move likely will be great for riders, but not for drivers.

Many on-demand drivers plan their day around surge rates; Nathan Sapp is one of them. He's sitting in his garage a little after midnight, "trying not to wake up the family," he says. His wife and three kids are asleep, but he just got back home from driving for Uber.

Sapp showed NPR pay stubs for a recent three-month period. On average, he is in his car and logged into his Uber app — either driving passengers or waiting to get one — 42.4 hours per week.

Like many drivers, he's got a system in place for finding surges: He talks to fraternity and sorority members at the local Indiana University campus at Bloomington.

"I definitely keep up with the news regarding events in town," he says. "They could be business meetings, conventions. They could be specific sporting events."

Surge is Uber's solution when passenger demand outstrips driver supply: Inform customers that their ride is going to cost more — maybe way more — then pick up those who agree and accept the loss of the ones who don't.

Drivers want surge pricing, though the system for getting it isn't foolproof. Sapp doesn't know in advance where any one fare will take him. He recalls one time he planned his day around a big Bernie Sanders event, "but not 20 minutes prior to the start of the speech, I got a trip that took me 60 miles away."

He ended up working in a completely different, slower city that night. To be clear, though, Sapp isn't complaining. He knows unpredictable trips are part of the deal.

In the three months of stubs he provided, surge fares were about a quarter of his total take-home pay, boosting his income by nearly $700 month. That's money to fix his car, pay insurance, take the family out. A day at the museum, for example, costs $100.

Uber driver David Thrasher, who works primarily in Atlanta, puts it more bluntly: "Surge is absolutely make or break. If there was no surge, ever, I wouldn't be able to afford doing this at all."

Thrasher also showed NPR months of pay stubs. When there's not much surge fare, he makes about $11 an hour. When he gets many surge rides, his weekly earnings go up to more like $16 or $17 an hour, on average.

While drivers see surge as a key feature of the job — and Uber advertises it as such to them — inside the company surge pricing is considered a market failure, a problem to be solved.

"That's where machine learning comes in. That's where the next generation comes in," says Jeff Schneider, engineering lead at Uber Advanced Technologies Center. "Because now we can look at all this data, and we can start to make predictions."

Schneider grants me an onstage interview at a Silicon Valley insider-conference called Structure Data. It is a well-known fact that, in the long-term, Uber is working on self-driving cars with no need for human drivers. I'm interviewing Schneider about his short-term priorities, and killing surge rates is top of the list.

Think of it this way: When a Beyoncé concert lets out, it's a no-brainer that there's a ton of demand. Drivers know that. What's harder, Schneider explains, "is to find those Tuesday nights when it's not even raining and for some reason there's demand — and to know that's coming. That's machine learning."

With enough of the right data inputs, computer algorithms can do the research that driver Nathan Sapp already does — only better, "so the surge pricing never even has to happen," Schneider says.

Drivers would be informed of the extra demand. "And I think that's one of the really cool things that machine learning's doing for Uber right now," Schneider says.

By "right now," he means he's on it. UberEATS, the company's food delivery service, is already using machine learning to anticipate how many people will call for lunch in a given area.

Uber hasn't released an exact timeline for the end of surge, and it's not clear if the company plans to make an announcement or just phase it out so that riders (myself included) lose the unpleasant 400-percent price increase, without ticking off drivers.

Sapp can't say he's surprised when I break the news to him, given the company's nonstop recruitment efforts. More drivers means less surge pricing brought on by excess demand.

"I get what seems like five to 10 notices every week to invite my friends and family to drive for Uber," he says.

Uber is competitive because of price: On average, Uber rides are about two-thirds the cost of a taxicab ride, according to data compiled by Certify. And there's a culture — a norm — of changing the rates for drivers regularly. Sapp says he gets a notice every few months telling him the new rates in his area.

"There's no conversation about it," he says. "The end."

As part of a recent class action settlement, Uber plans to start letting drivers collect tips. It could be that the income lost from surge is replaced by passengers voluntarily giving a bit more.

Thrasher says it'll take more than tips — that the company will need to raise the base fare for drivers.

"If they took away surge and kept the base fare as it is, nobody could survive doing it," he says.

Editor's Note: Since this story ran, media outlets including MarketWatch and TechCrunch have raised questions about its accuracy, citing a statement from Uber.

NPR's reporting is based on an on-the-record, public conversation with Jeff Schneider, a leading technologist at the Uber Advanced Technology Center. You can watch here. In it, Schneider says surge pricing is a market failure and a problem his team is working to solve:

Schneider: And so the idea is if you can predict that demand, you get that information out there – and you get that supply there ready for the demand so the surge pricing never even has to happen. And I think that's one of the really cool things that machine learning's doing for Uber right now.

Shahani: So just note, Jeff from Uber is saying that machine learning will solve the problem and get rid of surge pricing.

Schneider: There we go!

Shahani: There we go, promise to customers.