Accessibility links
For People With Disabilities, New Technology Can Be Life Changing : All Tech Considered "We shouldn't need to know they have a disability. It should just work for them."

For People With Disabilities, New Technology Can Be Life Changing

For People With Disabilities, New Technology Can Be Life Changing 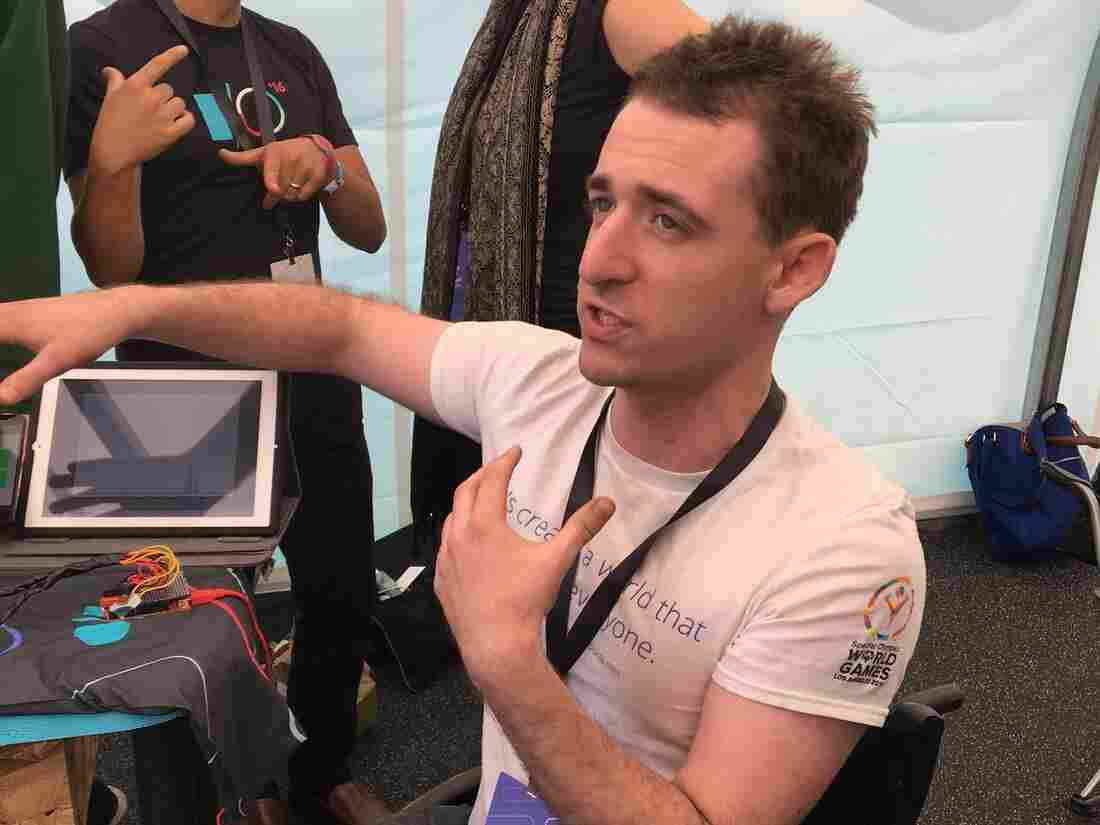 Paul Herzlich works in Google's legal department and helped develop a special sensor for "pressure sores" by those who use wheelchairs. Laura Sydell/NPR hide caption 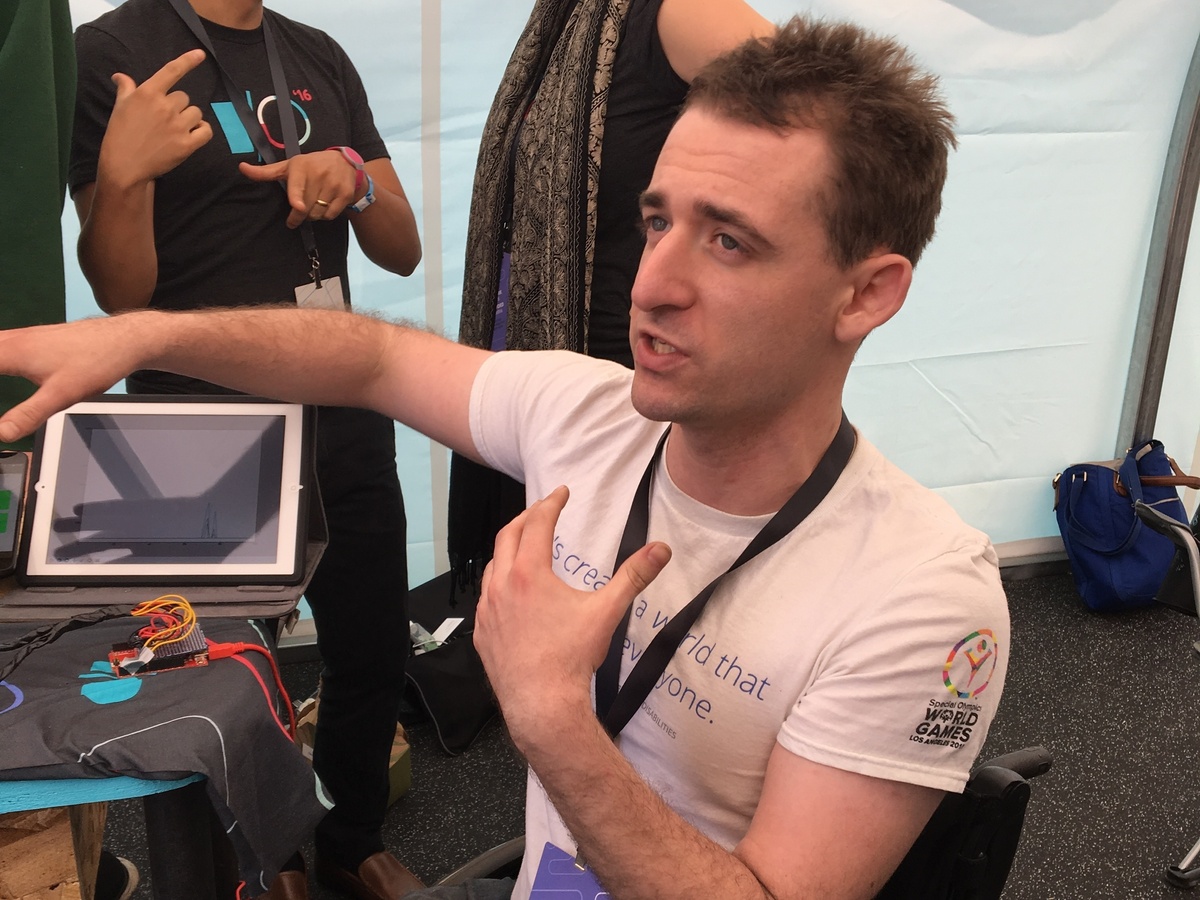 Paul Herzlich works in Google's legal department and helped develop a special sensor for "pressure sores" by those who use wheelchairs.

For most of us, eye tracking technology sounds interesting. But it's not life changing. Eye tracking allows users to move a cursor around a computer or mobile device simply by moving your eyes and head.

Oded Ben Dov initially used eye tracking technology to develop a video game that he showed off on Israeli TV. The next day, he says, he got a phone call from a man who told him: "I can't move my hands or legs. Can you make me a smartphone I could use?"

That's when Ben Dov realized that his eye tracking technology could change lives.

"For me, that was a calling to put my skills and knowledge to good use." Ben Dov went on to found Sesame Enable, a company that sells smartphones for people who can't use their hands.

Sesame Enable, which is based in Israel, was in Mountain View, Calif., this week for Google I/O, the annual conference for developers who make products using Google technologies. Sesame Enable is getting support from Google.org — the company's charitable arm.

"We shouldn't need to know they have a disability," Andersson says. "It should just work for them."

But taking existing technology and making it useful for a disabled person often does require new designs. Tomglobal.org — a nonprofit that brings together technologists who want to solve problems for people with disabilities, gets financial support from Google.org.

For Wheelchair Users, A RoboDesk For Electronic Devices

One of the products generated at a tomglobal.org hackathon was on display at the I/O conference. It's a special sensor device for people in wheelchairs who face the problem of "pressure sores." It was developed by Paul Herzlich and some of his colleagues. Herzlich works in the legal department at Google and he uses a wheelchair.

Pressure sores "happen when someone is sitting in the same position for too long," Herzlich says. "It decreases blood circulation to that area and eventually leads to a breakdown of the skin in that area." Herzlich says he was once hospitalized after getting a pressure sore and that the condition can be deadly.

The sensor device he developed fits easily on a wheelchair seat and it's connected to a smartphone app via Bluetooth.

"If the app notices that the pressure hasn't changed in a certain period of time it will notify the user as a reminder to move," Herzlich says. "It's raising that awareness for the user because we're often paying attention to other things throughout our day and don't remember to move."

Herzlich and his colleagues hope to bring the product to market and develop a version for hospitals where patients face health problems related to bedsores.

Google was actually a little behind some of its rivals when it comes to making accessibility a priority, says Mike Shebanek, the senior director of accessibility at Yahoo. Shebanek is also with an organization called Teach Access, which brings together employees at tech companies that want to work on accessibility issues.

Shebanek says in the tech world, Apple led the way by making its smartphones accessible. "Things like magnifiers and screen readers were built into the product," he says.

Though Apple poses other issues for developers who want to make technology accessible. Oded Ben Dov of Sesame Enable says his company can't make its product work as well on Apple devices because of its closed operating system. Google's Android is open source.

The next update to the Android operating system will enable Open Sesame, an app that can be used on any Android smartphone.

Yahoo has an accessibility team, which works and trains engineers throughout the company to design all Yahoo products to be accessible.

"What we find is that when we give these designers and engineers an opportunity to do this, they have such a positive experience they want to keep doing it," Shebanek says.

He says a lot of tech companies realize that the market for products that have a variety of accessibility features is large. The World Health Organization estimates that more than 1 billion, out of the approximately 7 billion people in the world, experience a disability.

But, as much as disabled people often benefit from technology developed for regular consumers, it also works the other way around. "We discovered that when we focus on users with disabilities our products get better for everybody," Shebanek says.

For example, Shebanek notes that Yahoo has been working on closed captioning for live events streamed on the Web. "We know that more people than those with hearing problems use closed captioning," he says. Try watching a TV screen in a loud airport or sports bars.

While it's great news for disabled people that tech companies are increasing their interest in making products for them, Shebanek says there's still a long way to go. It's still rare for companies to have an accessibility team, and that's especially true at startups.

Google I/O's dedicated space appears to show a real commitment on the part of one of the world's largest and most influential tech companies to using technology to make life better for people with disabilities. And, as Google's Eve Andersson notes, most of us are likely to discover that accessible technology will become more important to us as we age.

"I use magnification a lot more than I did in my younger days," she says.

A previous version of this post misspelled Eve Andersson's last name as Anderson. And Mike Shebanek's name was misspelled as Shebenack.