Accessibility links
In Omaha, A Library With No Books Brings Technology To All : All Tech Considered The privately funded, $7 million Do Space provides free access to computers, high-end software, 3-D printers, and laser cutters. It's a learning and play space, as well as an office for entrepreneurs. 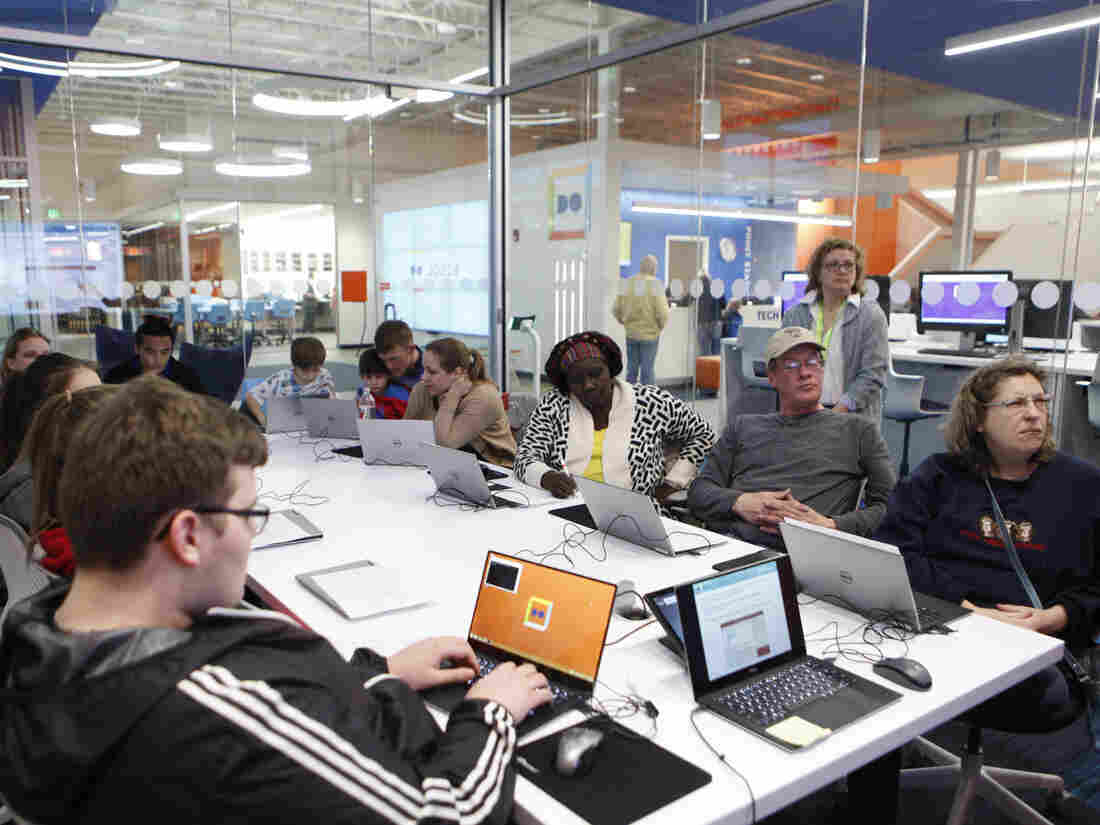 Students at Do Space learn to use a laser cutter during a crash course on how to design a key chain. Joy Carey/NET News hide caption 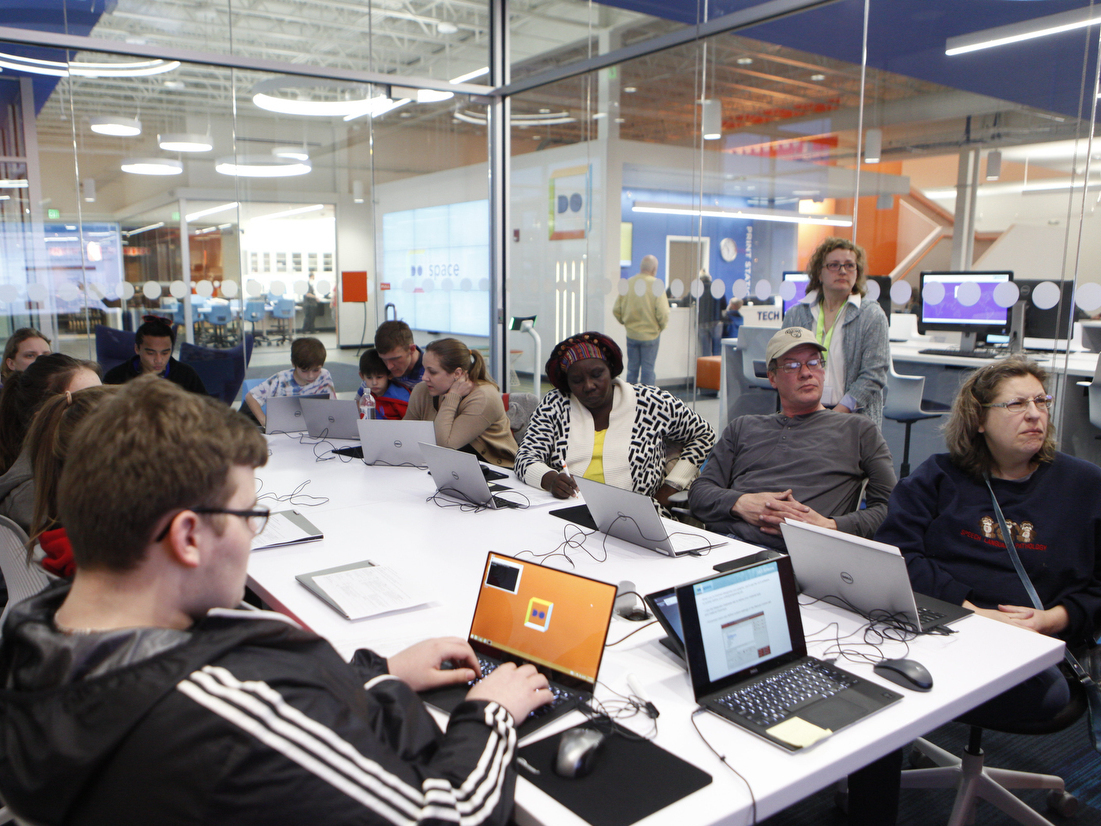 Students at Do Space learn to use a laser cutter during a crash course on how to design a key chain.

On the corner of the busiest intersection in Omaha, Neb., there's a square cement building, wrapped on two sides with a flashing LED billboard promoting the high-tech equipment and classes inside.

"I thought it was a 3-D printer sales place," says Frank Fu, a high school student.

Earlier this year, Fu stumbled upon Do Space, a technology library providing free access to powerful PCs loaded with software used by businesses and artists. There are 3-D printers and laser cutters.

"It was exactly what I was looking for, and I never knew there was a place anywhere like it, and it turns out there's not," Fu says.

There are no books in this library. Instead it's jammed with high-end technology that it provides free to the public.

As director Rebecca Stavick tells visitors, it's a logical evolution from traditional libraries.

"I've always thought of libraries as places full of tools. Books are tools, scrolls are tools, computers are tools," she says. "This vision of bringing technology to everyone in the community, it just gets people very excited."

Taxpayers didn't fund this library. Instead, Heritage Services, a coalition of Omaha philanthropists, donated $7 million to renovate the building — which had been a Borders bookstore — and pay for computers, 3-D printers and the Internet bandwidth. Sue Morris speaks for the donors.

"With 1 [gigabit] minimum, to go up to 10 gig, to have that in a public building that's free?" she says. "That's really amazing; that is unheard of anywhere."

That computing power also makes it a launchpad for entrepreneurs.

"We know people run businesses out of this building, and we're OK with that," Morris says. 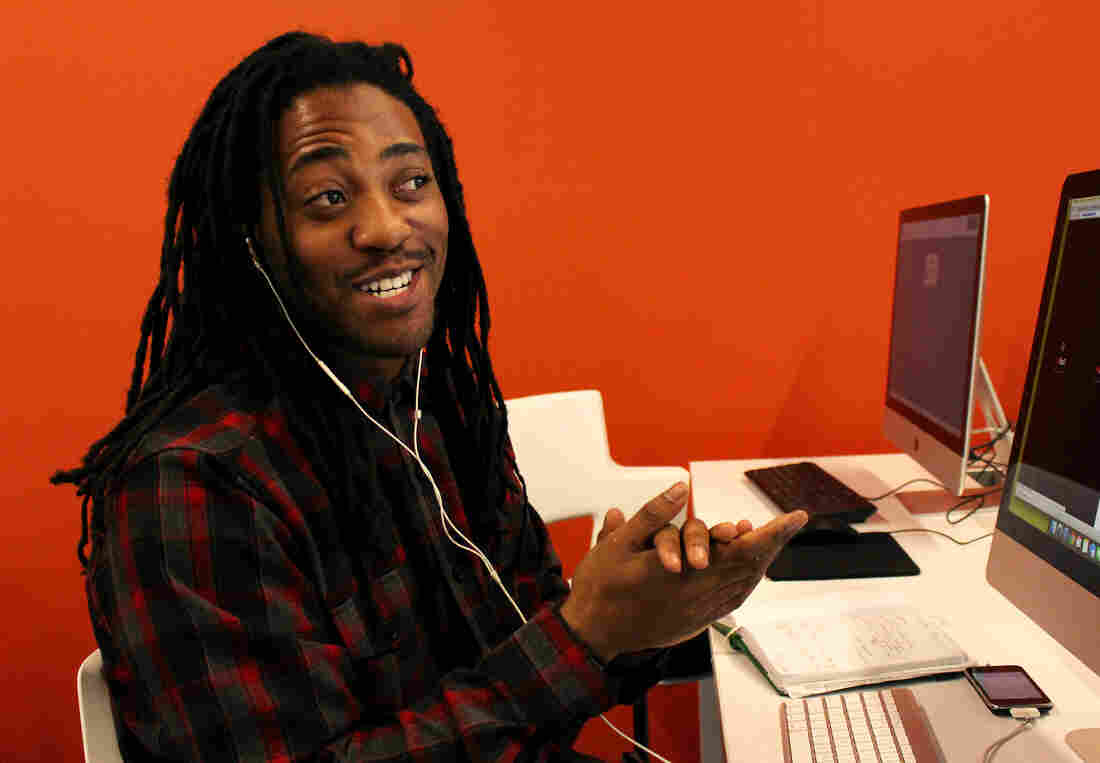 Hans Bekale is among them.

"This is probably the biggest dream of any developer, anybody in this space, to have a place like this, right?" he says. "Because this is our modern-day office."

Bekale manages his small multimedia business from Do Space. He says technology attracted him, as well as the informal community of creative people who hang out there.

"I would be locked into my office, just sort of myself, right? Not hearing fresh ideas," he says. "Some of the simplest and the most innovative things that I've thought of just happened through conversation."

Across the country, other libraries are expanding their tech options, from 3-D printers to video equipment. Susan Benton of the Urban Libraries Council says the Omaha experiment takes the concept to a new level.

"To be sure, other public libraries are looking at this," Benton says. "The density of the technology, and the scope and the ability for a variety of programming to be going on at the same time, in one space, is unique."

It can be loud at Do Space, and the range of activity under way is a little disorienting — from enthusiastic little kids gaming in front of a giant flat screen to classes for the blind on using home computers.

"The people that you meet at the Do Space, it's diverse," he says. "You never know if they're going to become your next business partner or your next best friend."