Accessibility links
Armslist, A 'Craigslist For Guns': Semi-Automatics Without A Background Check Can Be A Click Away : All Tech Considered The Armslist website, and others like it, are coming under increased scrutiny by law enforcement, gun control advocates and researchers as debate over access to these kinds of weapons heats up.

"With recent events and political environment, these weapons will be harder to get a hold of." "This is what your AR-15 dreams it could be when it grows up." "I can meet ... near the FL Mall in Orlando or any other time." "Cash is king."

These classified advertisements for semi-automatic weapons were listed this week on Armslist, a website where anyone can advertise a firearm they'd like to sell, and anyone can contact a seller with an offer to buy. The site is legal. But there's no way to know whether buyers and sellers who meet through Armslist are following federal, state or local background check rules.

We wanted to see how many semi-automatic firearms — defined here as handguns and rifles able to rapidly fire a large number of bullets, one shot per trigger pull, without having to reload — can be currently found on Armslist, and how quickly new listings appear. This provides a window into the difficulty of regulating access to a type of weapon frequently used in mass shootings.

Omar Mateen, the Orlando mass shooter, used semi-automatic weapons. So did the Sandy Hook Elementary School shooter, the San Bernardino killers, and at least 70 percent of shooters listed in a database of all mass shootings in America since 1982 compiled by Mother Jones. 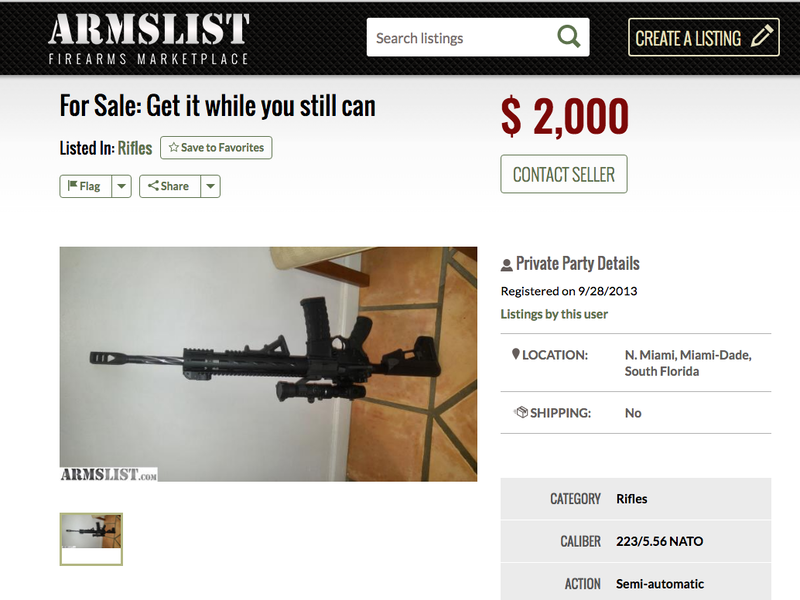 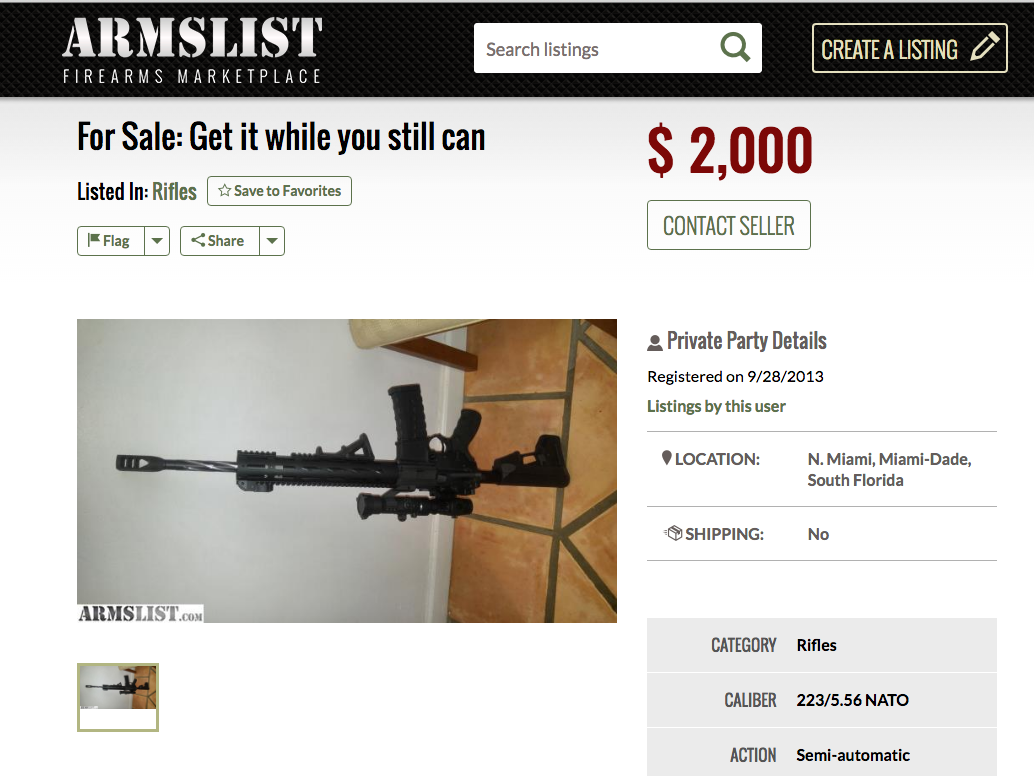 Our data analysis shows that semiautomatic weapons comprised at least 1 in 4 firearms listed on Armslist in the days following the Orlando shootings.

Those shooters acquired their firearms in a variety of ways, and there's no evidence that any of them used Armslist. But this site, and others like it, are coming under increased scrutiny by law enforcement, gun control advocates, and researchers as debate over access to these kinds of weapons heats up.

In October, New York City's Department of Consumer Affairs subpoenaed Armslist for transaction and advertising records. "Through this investigation into Armslist, DCA is stepping up and doing its part to keep our city safer for every New Yorker — civilians and officers alike," NYC Mayor Bill de Blasio said at the time.

We analyzed data on all firearms currently advertised at Armslist, and found that in the four days following the mass shooting in Orlando — from Sunday, June 12, through Wednesday, June 15 — 15,500 unique new listings for all types of firearms were posted to the site; 3,625 — or about 1 in 4 — were listed as semi-automatic weapons by the seller; more than 2,000 firearms were not categorized by weapon type.

This chart shows how many of these listings were posted, by state:

Armslist, often described as "the Craigslist for guns," doesn't vet sales arranged through its website, and its existence is legal. Its terms of use say users have to follow all laws, federal or otherwise, and that it's "the sole responsibility of the buyer and seller to conduct safe and legal transactions."

We tried to reach Armslist for response to this story but did not hear back.

There's no federal law requiring a private gun owner to run a background check before selling someone a gun. At least 18 states (and the District of Columbia) have their own laws for private firearms sales, and some require background checks in some cases. So do some cities. But — and more on this in a bit — there's evidence that not all private buyers and sellers follow the rules. Illegal sales happen, and currently, there's no way to stop them.

Armslist isn't the only site of its kind, though it is considered to be the biggest and most popular. All ads are listed in the U.S. But there's no way of knowing exactly how many sales are arranged through sites like Armslist each year. "We aren't able to track those," says Corey Ray, a spokesman at the Bureau of Alcohol, Tobacco, Firearms and Explosives.

In October, Harvard researchers surveyed 2,000 gun owners and found that roughly 40 percent got their most recent gun without submitting to a background check. That finding lines up with an earlier survey from 1994.

Gun shops and other vendors "engaged in the business" of selling firearms — meaning they have to run background checks — can also advertise through Armslist. But in our analysis, 75 percent of all sellers were listed as "private."

It should be noted that one investigation into Armslist found that nearly 30 percent of its private gun ads were listed by "high-volume" sellers, i.e. people who seemed to be "engaged in the business" of selling firearms but operating without a license.

So, who buys firearms at sites like Armslist? It's impossible to know for sure, since Armslist doesn't require users to create an account through the site or divulge any personal information to post ads, browse listings, and contact other users. In our analysis, 2,634 listings — 17 percent — were created by users who haven't registered on the site (though registered users don't have to divulge personal information, either).

There are lots of reasons someone might look for a gun through Armslist: to save money, to hunt for hard-to-find models, to buy directly from the current owner. These sites can also appeal to people who might have a hard time legally acquiring a weapon at a gun store, or even through online gun retailers like Grab a Gun or auction sites like GunBroker — all required to run background checks.

On its website, Grab a Gun details the six-step process all buyers have to go through to buy a gun there. 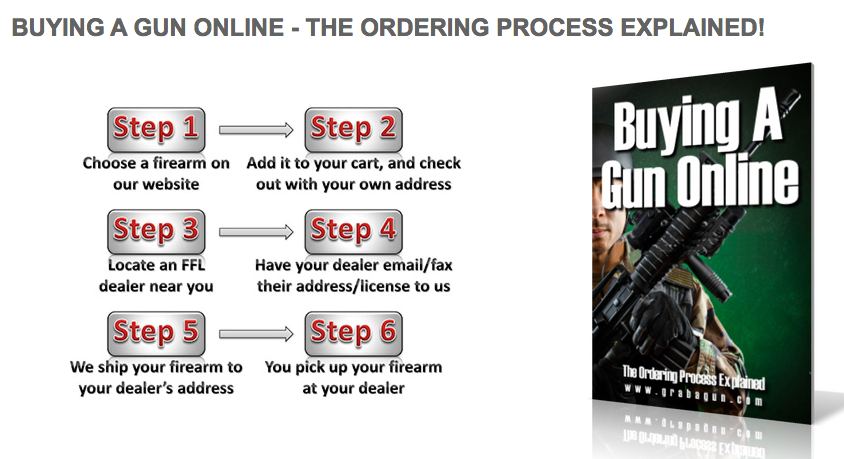 Grab a Gun/Screen shot by NPR

But using Armslist, sellers and buyers don't have to go through this process. As Alex Yablon at the investigative gun news site The Trace, which aims to reduce gun violence, puts it, "If you think of online gun stores as being like Amazon and online gun auctions as like eBay, then sales arranged online but conducted in person are like Craigslist. And like transactions arranged on Craigslist, they are essentially beyond regulation."

Of course, most people using Armslist and other sites like it are there to purchase guns legally, and intend to use their guns legally and responsibly. Some of the semi-automatic weapons currently listed on Armslist wouldn't be very useful in combat or an assault situation, and are valued mostly by collectors and hobbyists.

Our examination of Armslist listings found a number of sellers who say they will only complete the sale at an "FFL" — a federally licensed dealer, usually a gun shop, where the buyer's background check can be run on the spot.

Breaking Down Gun Terminology Amid New Debate Over Gun Control

Breaking Down Gun Terminology Amid New Debate Over Gun Control

"Will only meet at local FFL to complete transfer. No hand to hand transactions will be done," writes one seller advertising a .223/5.56 caliber Colt AR-15. Some sellers refuse to ship items, while others stipulate they'll only ship to licensed dealers. Others say they will need to see the buyer's permit to purchase or carry before making a sale.

But other listings are far more relaxed — or more desperate.

"I will travel very far to met [sic]. Asking $275 or OBO. Really looking to selling [sic] considering any serious offer," reads one current listing for a semi-automatic rifle.

A 2013 investigation by Mayors Against Illegal Guns found that 3 percent of prospective buyers on Armslist had a criminal record that could have disqualified them from buying a gun.

That year, the New York Times traced one "handgun wanted" listing on the site back to a prospective buyer with "a pair of felony convictions for burglary and another for motor vehicle theft, as well as a misdemeanor domestic violence conviction — all of which bar him from having guns." This January, The Guardian found Armslist users willing to sell without a background check.

In its Terms of Use, Armslist states that buyers and sellers are responsible for ensuring that all transactions facilitated through the site are legal. It also lists the main phone number and website for the Bureau of Alcohol, Tobacco, Firearms and Explosives, for those who need to brush up on the rules. But during a 2011 NYPD undercover operation of Armslist and similar sites, in which investigators pretended to be buyers who stated they couldn't pass a background check, 62 percent of sellers they contacted said they were willing to sell them a gun anyway.

A handful of sales have ended in death. As Stephanie Mencimer at Mother Jonesreported in 2013, an NYPD investigation found that guns used in four murders, and one suicide, could be traced back to Armslist transactions.

And in 2012, a Wisconsin man named Radcliffe Haughton bought a pistol in a McDonald's parking lot from a seller he had met on Armslist. He had posted a "gun wanted" listing on Armslist three days after his wife acquired a restraining order against him for domestic violence — making it illegal for him to purchase a gun. He wrote:

"Looking to buy ASAP. Prefer full size, any caliber. Email ASAP. I constantly check my emails. Hoping it has a high mag capacity with the handgun, ammo, accessories. I am a serious buyer. Email me ASAP. Have cash now and looking to buy now. I am mobile."

The next day, Haughton murdered his wife and two of her co-workers before killing himself.

In January, President Obama announced a new executive action on guns, saying he wants to close a "loophole" that makes it easy to buy guns online without a background check. But this plan would not affect private sellers at sites like Armslist. It calls for stronger enforcement of existing laws requiring anyone "engaged in the business" of selling firearms to run background checks. But for an ordinary person looking to quickly trade a gun for cash, nothing would change under this plan.

Armslist released a statement following Obama's announcement, saying, "Many, if not most, private sellers want to do background checks. Oftentimes, the reason they do not is because under the current system, their only recourse is to physically go to a licensed dealer and pay the dealer a fee to do the check. This is costly and burdensome." The statement recommended making it possible for individuals to run background checks themselves, saying that "would be a force multiplier and have a meaningful impact in reducing crime." (ATF spokesman Corey Ray said that proposal brings up a number of security and privacy issues.)

Much has been made of the fact that Orlando shooter Omar Mateen, who purchased both of the weapons he used in his deadly rampage legally, was twice investigated by the FBI for suspected terrorist ties and statements, but didn't end up on the terrorist watchlist. Even if he had, Mateen could still have legally purchased his guns; terrorism suspects aren't prohibited from owning firearms. Now, some typically on opposite sides of the gun control debate are pushing to change that.

But even if Mateen were on the watchlist, and even if known terrorists were barred from purchasing weapons from licensed dealers, unregulated private sales — made easier through online marketplaces like Armslist — still could have enabled him to buy his weapons.