Accessibility links
In An Age Of Online Sharing, Of Course The Monsters Do It Too : All Tech Considered It seems "startlingly banal," but killers' social media use during mass shootings has become the norm for the attacks. It's another sign of how intrinsic the sites are to affirming our identities. 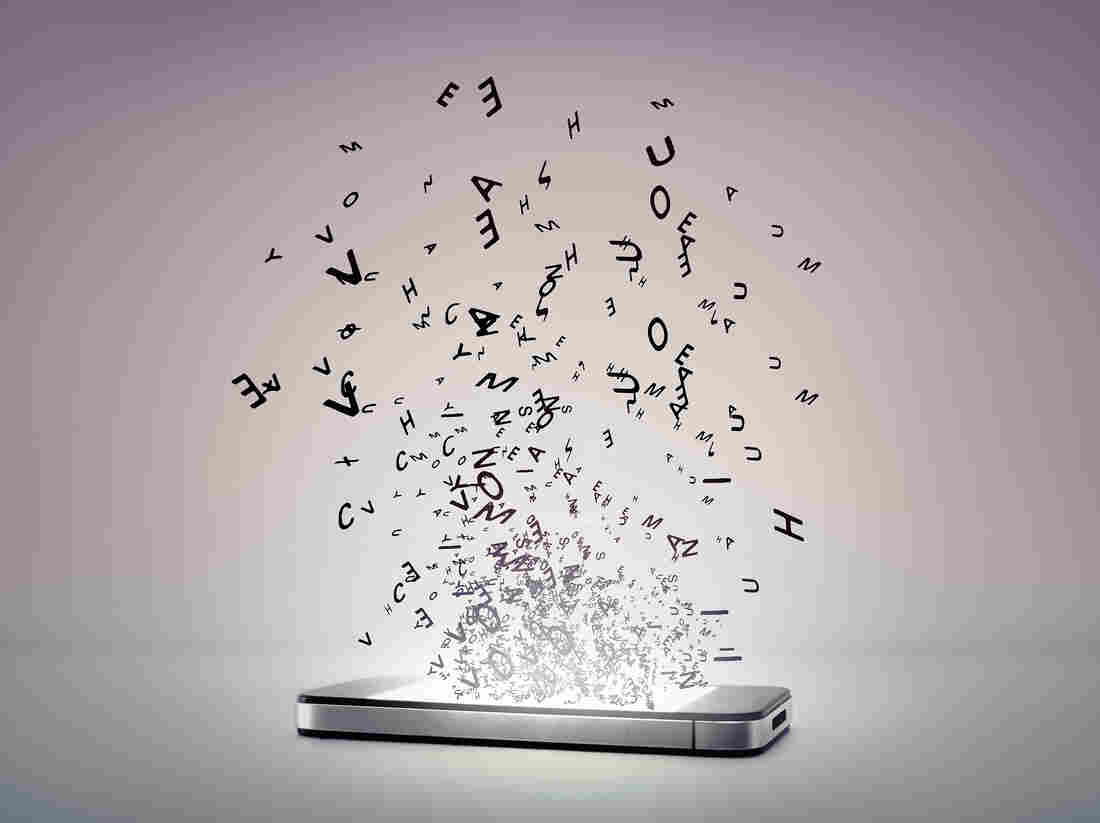 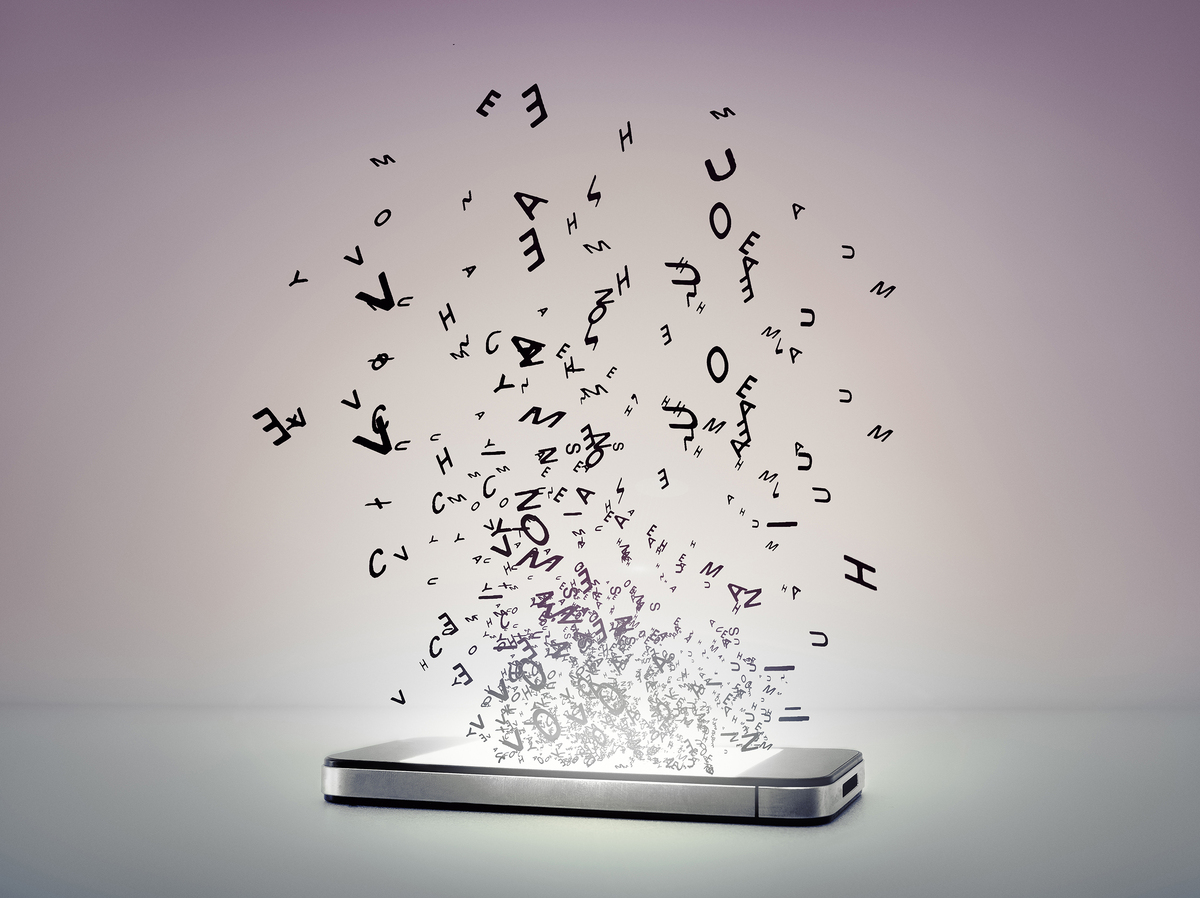 A lawmaker's letter shone light this week on a disturbing element in the story of the Orlando shooting: Before and during the attack, the gunman searched and posted on Facebook, in part to find out if he was in the news.

We've seen this before: In the stomach-churning first-person-view video of the 2015 Virginia shooting of a TV crew, in the rambling online suicide note of the 2014 Isla Vista, Calif. shooter, in the MySpace page of the gunman's in the 2011 Tucson shooting.

In some ways it's a logical next step: Murderers for years have been using the media as a platform to project a particular final image, promote a manifesto, seek notoriety. Social media has become the perfect platform for the celebrity-seeking, narcissistic pathology of a mass killer.

(While we're on this topic, please read this important essay by Zeynep Tufekci — a notable thinker on the topic of technology, media and society — who writes about facing up to shooters' orchestrated media fame. An Arizona State University study, for instance, has found evidence that coverage of mass shootings has inspired copycats.)

A Surgeon's Bloodstained Shoes Have Become A Symbol Of Orlando's Defiance

But does social media serve purely as a boundless, unfiltered stand-in for the newsroom switchboards and hastily mailed diatribes of the past?

For a broader exploration, I turned to Sherry Turkle, a clinical psychologist and MIT professor renowned for her study of digital culture, including her books Reclaiming Conversation and Alone Together.

She spoke about the "startlingly banal" and frightening revelation that a shooter might Facebook during the attack, as well as the overarching need to combat social isolationism that's permeating our society. The interview has been edited for length and clarity.

What's the psychological context to what compels mass shooters to turn to social media as the attack unfolds?

Just the background of this: Our serial killers, shooters, pathological — these people who are harmful in our society live in our society. And so they are going to participate in the mores, in the norms, in the habits that we all share...

And so, as much as this young man was pathological and sick — and I don't want to normalize his behavior in the least — for him, this atrocity was part of his identity, and the fact that he posted it should be the least of what surprises us.

So is this then sort of an intersection of a pathological mass-murderer with a pre-existing expectation that this is what social media is for, this social validation? 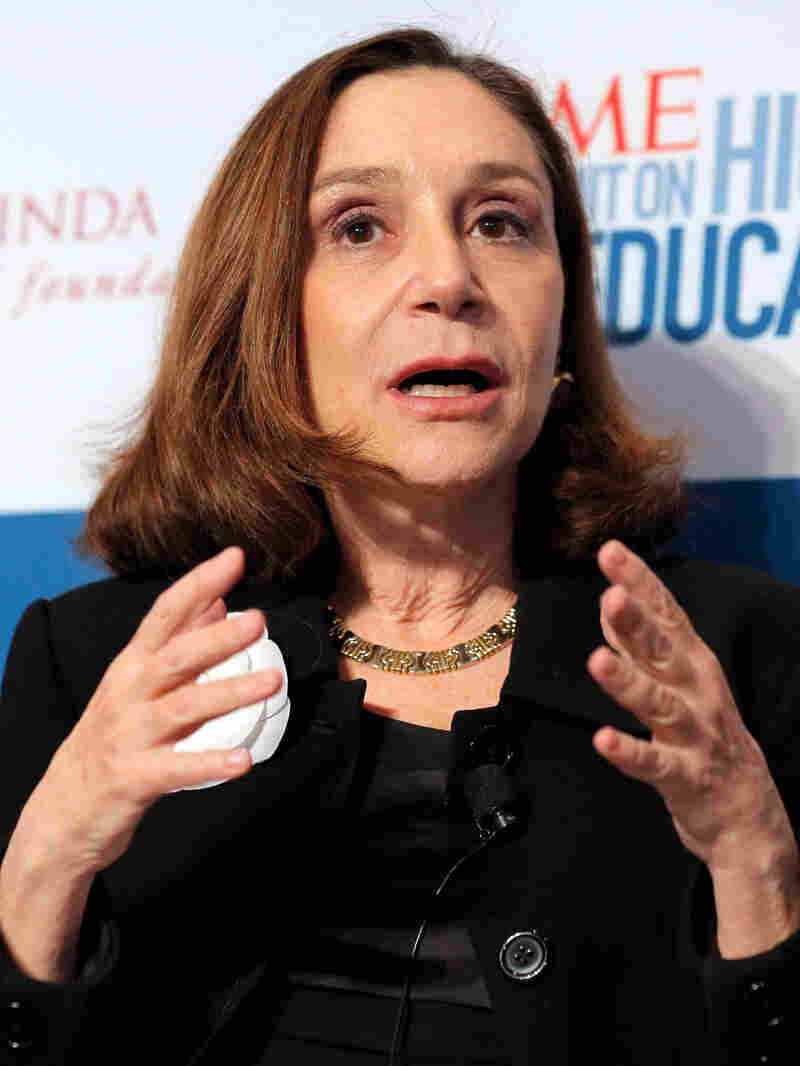 Sherry Turkle is director of the MIT Initiative on Technology and Self. Jemal Countess/Getty Images for TIME hide caption 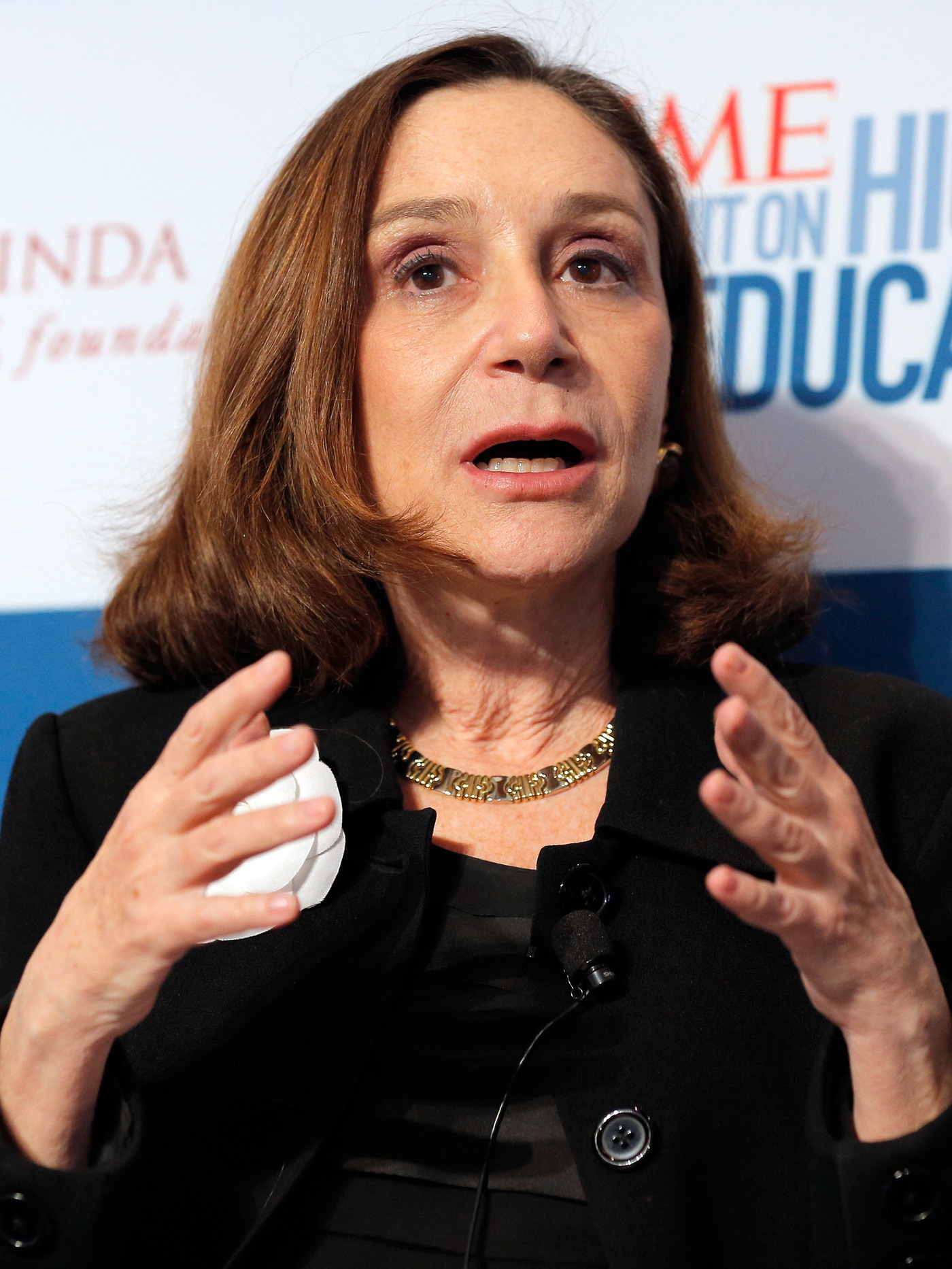 Sherry Turkle is director of the MIT Initiative on Technology and Self.

We're in this peculiar spot where most of us post what makes us look good ... and we don't really want to confront that the reality is — to this man — doing this, he thought it made him look good. And I think that's the piece that is too horrible for us to confront, because it makes him into someone who is a monster.

I think in the coverage of him, you want to make him into someone who's like us but doesn't have our beliefs, or ... could've been saved if he could be talked out of this, or if he hadn't met these radical Islamists...

We haven't stabilized in a way to think about, who are the people who would do these atrocities? ... And yet they live apparently in our society, holding down jobs, going to the movies, watching TV shows. They live among us, enjoying the pleasures that we do.

It's easier to say, "this man was insane, pathological and nothing like me," but what you're saying — that his use of Facebook reflects what we do in our daily lives but on a completely different, horrifying scale — that makes him more like me, and that's what makes me extremely uncomfortable.

This particular action and how we read it — that he posted things on Facebook — there are two ways to take. "Oh, he's such a monster, he advertises his killing spree," and that's a way to alienate him from us and say, "oh he's completely different from us, nothing like us, he's a monster, and I only advertise my beautiful food and put it on Instagram."

And then, there's a moment when ... you feel, "oh my god, he has a Facebook page and he's just posting stuff he's going to do." There's something startlingly banal about that... That in some ways, he participated in norm mores, that when you're going to do something, you post it. And that makes him more frightening...

Somebody said something jarring to me about this, which is really wild to think about: Was this guy, in his terrifying way, really after likes?

That's a different question. Is it possible that what these people, who use Facebook for atrocities, are after is approval? ... That's a much more hopeful question. 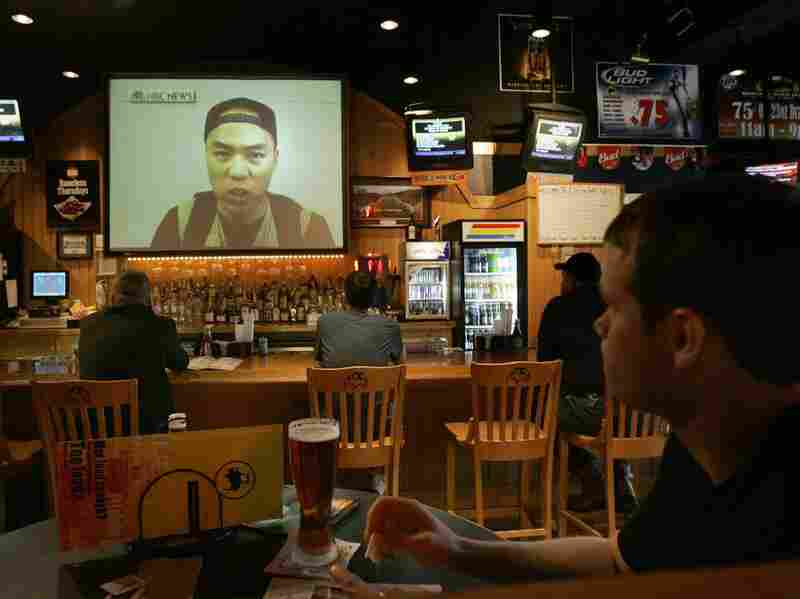 Customers watch a video of Seung-Hui Cho on the NBC Nightly News on April 18, 2007, at a local restaurant Blacksburg, Va. Between his first and second bursts of gunfire, Virginia Tech gunman Cho mailed a package to NBC that containing photos of him brandishing guns and video of him delivering an angry, profanity laced tirade. Today such rants and images are posted directly online via social media. Amy Sancetta/AP hide caption 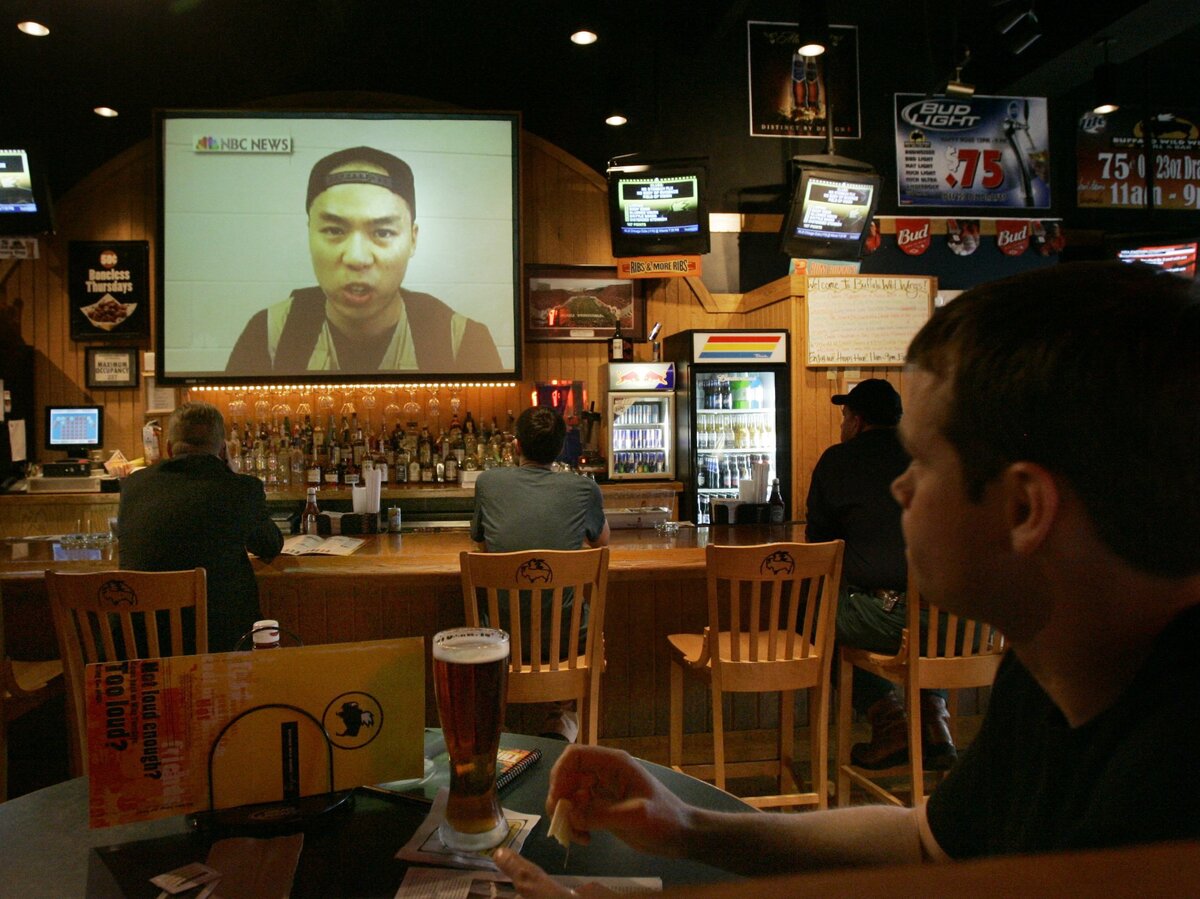 Customers watch a video of Seung-Hui Cho on the NBC Nightly News on April 18, 2007, at a local restaurant Blacksburg, Va. Between his first and second bursts of gunfire, Virginia Tech gunman Cho mailed a package to NBC that containing photos of him brandishing guns and video of him delivering an angry, profanity laced tirade. Today such rants and images are posted directly online via social media.

If our analysis of this man is that he was alienated ... if these are sort of alienated, out-of-touch people ... [who] look for meaning by acting against America or acting for a cause — that's a much more classic portrait of people who become extremists and become people who are hurtful to our society. If, in a way that our society hasn't found a place of them, they're alienated from us — and if only they had been more socially integrated ... they would not have turned against us....

That model suggests that, if he'd been part of a church group, a community group, and wasn't so alienated in the way we live now where so many people are so isolated, alone ... then there are more things we can do, to bring them more into a fold as a society. ... Much more investment in civic structure, in community structure, in churches and synagogues and program and for parents, young people and older people...

That's why I think this Facebook issue opens out so many takes on the story. On the one hand, it makes him more like us, and we have to confront him. And one of the things we have to confront is the degree of our social isolation. Do we feel that it speaks to something that we should act on in our society as a whole, for all of us — not just the pathological who go off to be radicalized...

Could one response be to say, "let's put more money in our community infrastructure"? Instead of saying, "let's kick everybody out and close the border," let's make it so that people who are here feel this is a place of tremendous integration, and community, and hopefulness, where people feel a part and included...

And is your observation that this kind of isolation is a factor of our age of social media?

People always have been isolated; now isolation has a new social pattern to it. It has a new kind of legitimacy ... people have always been isolated, but when they were, there were forces that pushed them out into their community. ... And the question is, is that new pattern giving you back what you need to sustain you?...

I like to say I'm not anti-technology, I'm pro-conversation. ... Really, what matters in the end is, you need to see people. ... We need to think about building a more inclusive society, in which fewer people are isolated.