Accessibility links
To Be The Very Best: Pokémon Go Enters Into Augmented Reality : All Tech Considered A new Pokémon mobile app will bring the virtual monsters into the real world. But the challenge for developers is to see if people are ready for AR in their daily lives. 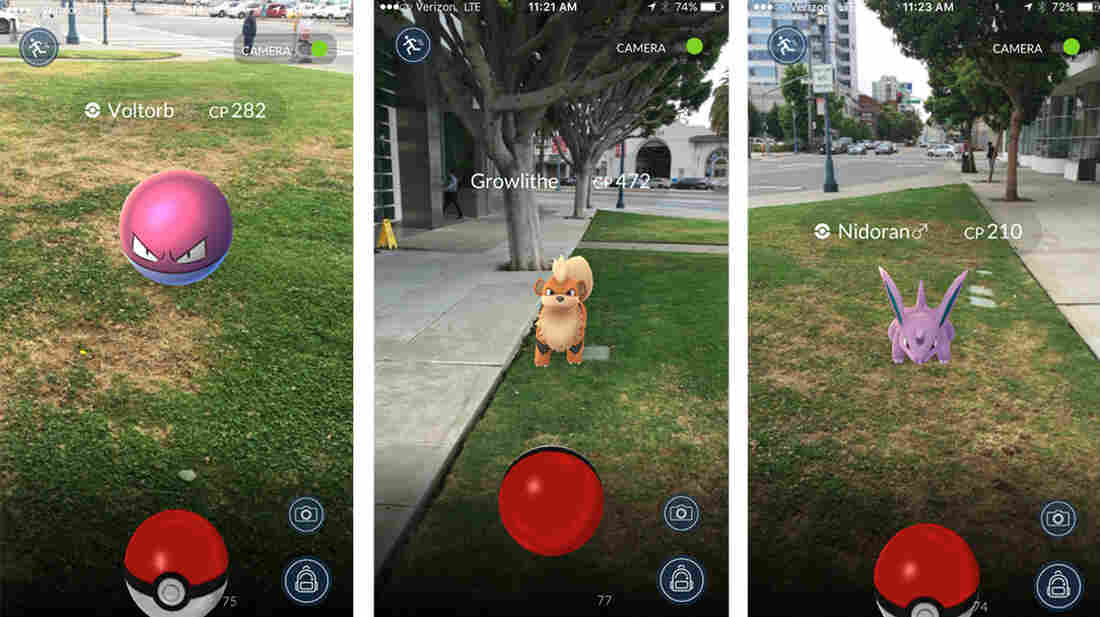 In the new Pokémon Go app, players can use their smart phone to see, battle, and catch the monsters in their world. The app will be released to the public sometime in July. Courtesy of Niantic Labs hide caption 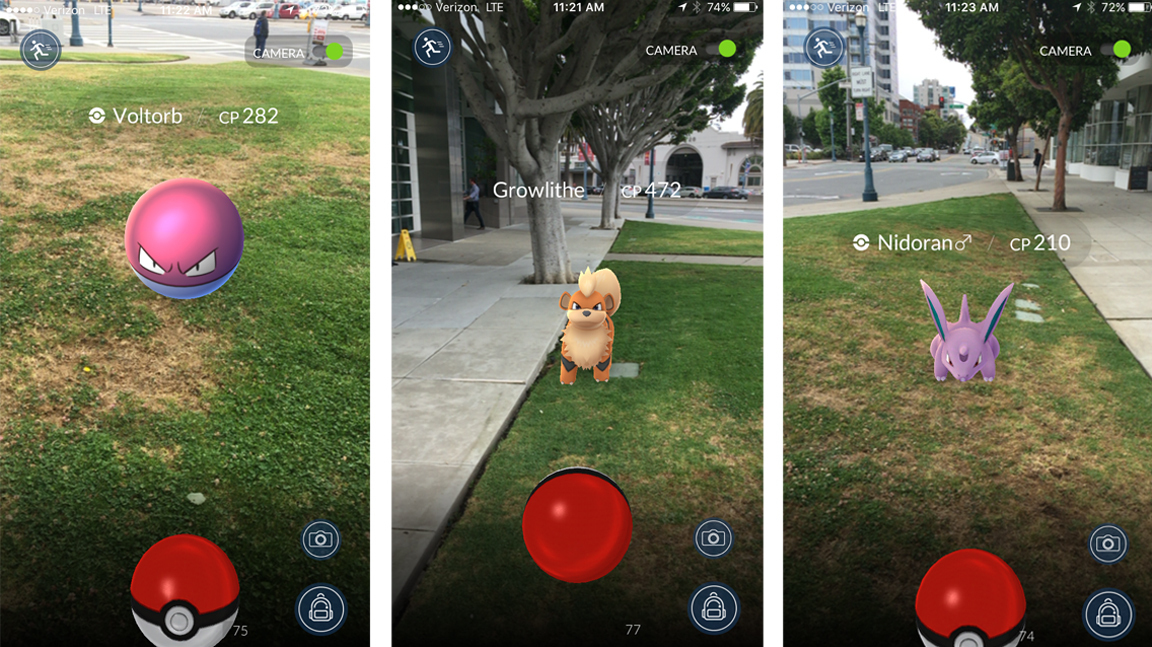 In the new Pokémon Go app, players can use their smart phone to see, battle, and catch the monsters in their world. The app will be released to the public sometime in July.

Halfway through your walk to school, a wild Charmander appears. Just a few throws of a Pokéball, and it could be yours. Will you stop to catch it?

Nintendo is betting you will. Not just that, they're betting that you've waited most of your life to see a Pokémon in the real world.

Pokémon Go — the upcoming iOS and Android app from Nintendo, The Pokémon Co., and developer Niantic Labs — promises to let anyone with a smart phone "find" and train the diverse creatures of Pokémon all around them.

For aspiring Trainers, it could be an entirely new way to interact with a now 20-year-old franchise.

For these companies, though, Pokémon Go — which launches for free sometime in July — offers the biggest opportunity yet to bring augmented reality into the mainstream, a chance to prove not only that AR technology is ready for people, but that people are ready for AR.

The challenge for the app's developers, according to Will Mason, co-founder of the virtual reality industry website Upload, is "normalizing the linkage between digital and physical."

Unlike VR, which is all-encompassing to a fault, the purpose of AR is to supplement people's interactions with their world, usually by overlaying visual information. For an AR product to be effective, it must feel natural to use.

"It's a new genre of experience, about blending in the gameplay with other things you're doing," says John Hanke, CEO and founder of Niantic Labs.

Niantic has some expertise in this realm. The company — which began as a startup inside Google and has since gone independent — is behind the popular AR mobile app Ingress. In that game, the screen shows points of energy springing up around a map of the user's surroundings. The energy appears at notable real-world locations, like museums or monuments, and users have to explore the world to encounter, and then battle over, those spots.

Like Ingress, Pokémon Go will create interactions based on users' locations.

If it sounds like a fantasy version of Google Maps, that's because it is: Hanke was involved in developing Google Maps, Google Earth and Street View, and he wanted to apply those technologies in new ways.

Mobile games, he says, seemed a perfect fit to encourage people to go outside and discover what he calls the "secret history" of their neighborhoods.

"You think you know them but you don't," Hanke says, "or maybe you walked by this place and never looked twice at it — whether it's a piece of artwork or a landmark you don't know the story behind."

After Google Maps' famous 2014 April Fools joke — in which the company imagined people using their mobile app to find Pokémon hidden in caves and oceans — The Pokémon Co. reached out to Niantic to actually make it happen.

"It's always something we've been exploring, and it really comes down to having the technology to do it properly," says J.C. Smith, senior director of consumer marketing at The Pokémon Co. 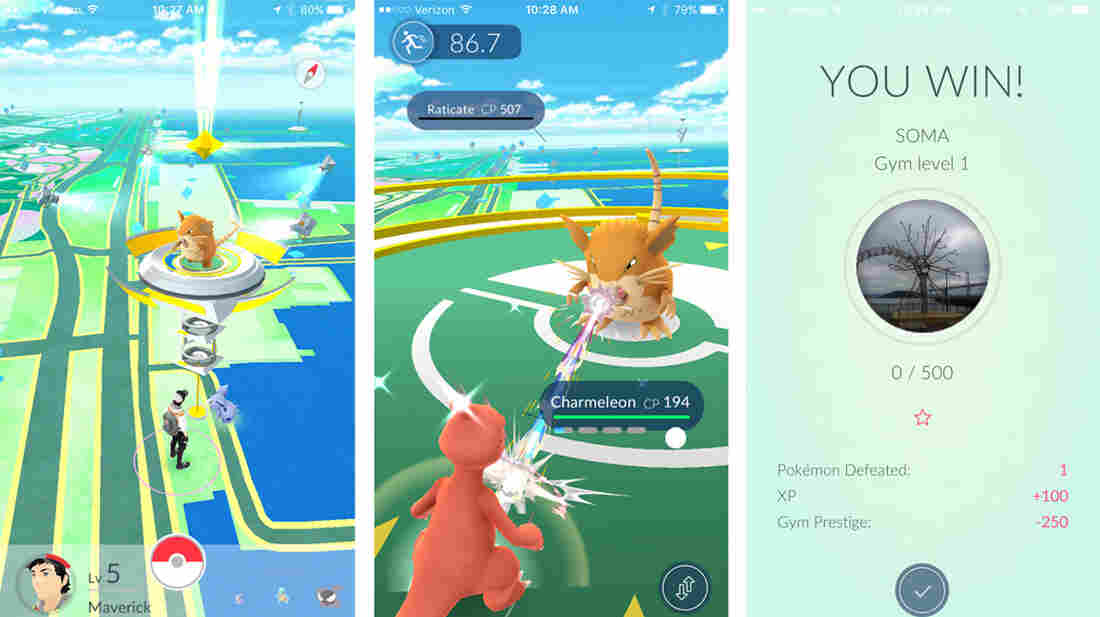 Players in Pokémon Go pledge allegiance to one of three teams and battle for control over Gyms, which are located at notable or historical locations in the real world. Courtesy of Niantic Labs hide caption

For Pokémon Go, Niantic took the tools it developed with Ingress — including its database of interesting and historical places — and brought them into the world of Pokémon. Those recorded places will become PokéStops and Gyms, where players can pick up items or compete against other players.

Rather than the linear adventure narrative of the core games (like Pokémon Red and Blue, or Diamond and Pearl), Go at times resembles a game of capture-the-flag. Players pledge allegiance to one of three teams, and battle with Pokémon to gain control of Gyms.

The central conceit should ring familiar, though. Wander anywhere outside, and the app will alert you when you come near a Pokémon — either through an alert on your phone, or on the forthcoming Pokémon Go Plus, a Bluetooth-connected device that looks and works like a tricked-out Fitbit.

(The Plus, with its $34.99 price tag, will theoretically enable people to play Go without stopping in the middle of the street to look at their phones.)

Take out your phone, though, and through the screen a Pokémon will appear in your surroundings, as if it's sitting on the grass or floating in the air. That's the true "augmented reality" part of the game.

Virtual Reality Vs. Augmented Reality: Should We Believe The Hype?

Virtual Reality Vs. Augmented Reality: Should We Believe The Hype?

Go isn't technically a new "generation" of the series, as each iteration of the core games is called — that will come out separately in November for the Nintendo 3DS. But Hanke says Niantic worked closely with Junichi Masuda, one of the series' original developers, to incorporate some 150-plus species of Pokémon into the app.

"We try to be true to the canon of Pokémon and the way things should work in that world," Hanke says.

That is, Pokémon will appear, behave and fight the way they do in the games and TV shows. Water-types, for instance, will appear only near bodies of water like rivers or lakes. Rare Pokémon in the games will similarly be scarce in the Go version.

For Taylor Freeman, Upload's other co-founder, Pokémon Go just scrapes the surface of what augmented reality could do.

"I think this could be a real driver of early adoption and bringing people into the fold and using AR," Taylor says.

While using AR in public — like wearing Google Glass — may currently be distracting or even awkward, society could get used to the notion. Proto-AR products like Pokémon Go, its developers believe, may pave the way to a world where that tech becomes ingrained in people's daily lives.

And if the app's successful, Hanke says, Niantic may integrate into the gameplay other wearable devices as they become socially viable. With glasses of its own, Pokémon Go could evolve into an even more vibrant world: Pikachu appearing right before your eyes, two players battling face-to-face to be the very best.

"I'll be the first person in line to buy those," Hanke says.

An earlier version of this post incorrectly said new Pokémon games for the Nintendo 3DS will be released in October. The games are due in November.