Accessibility links
Pokémon Go Is Catching Us All — In Unexpected Ways : All Tech Considered After being released last week, the augmented reality game is the most popular app in the world, landing people in odd places and weird, sometimes dangerous situations. 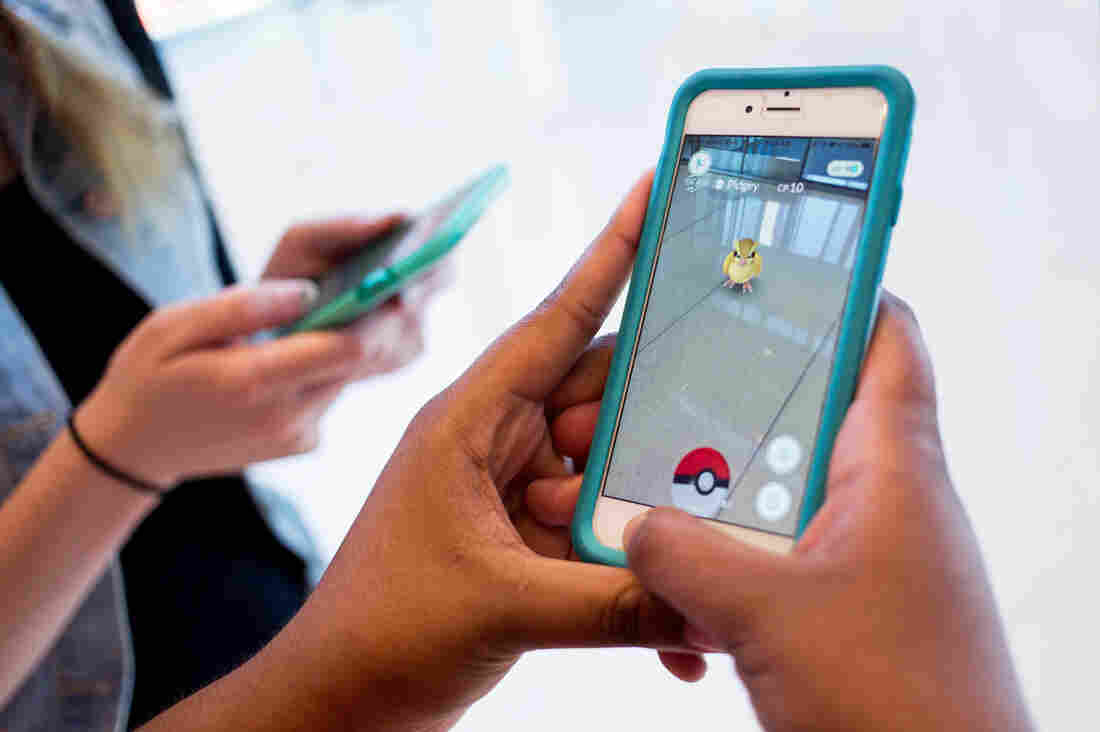 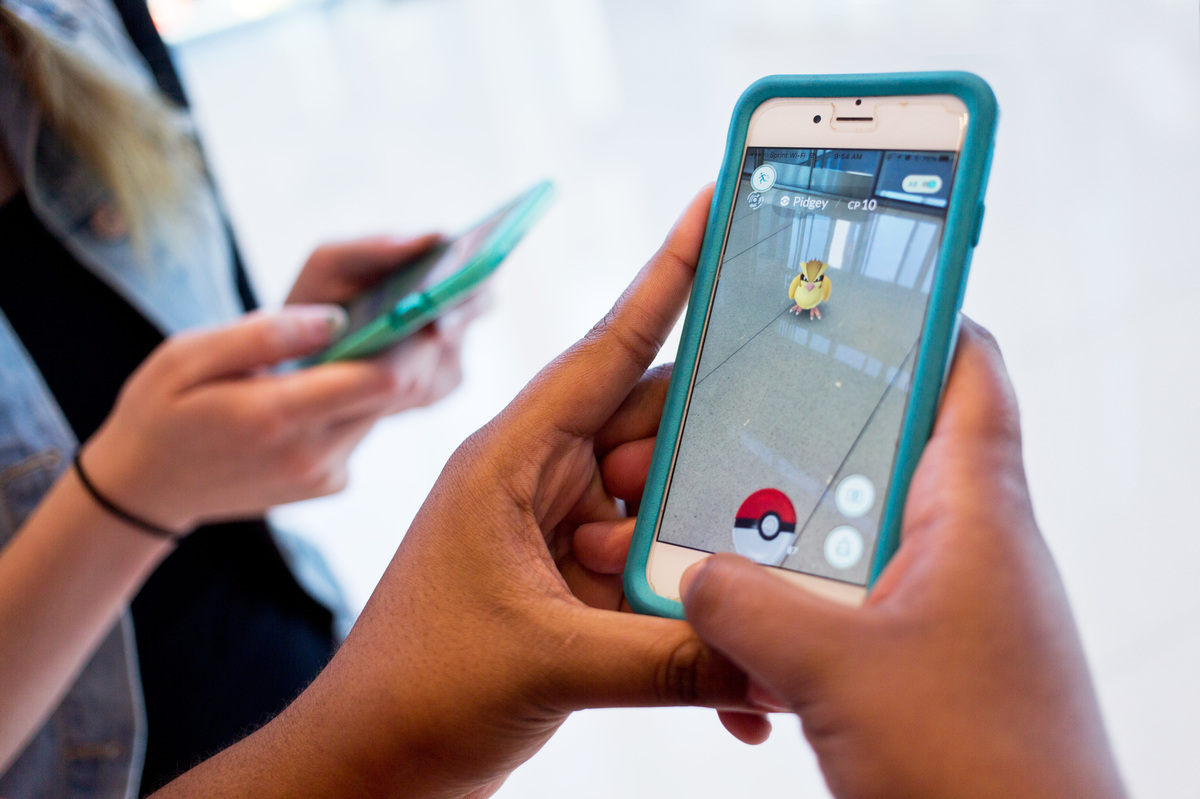 The mobile app Pokémon Go is currently the top downloaded free app in both Apple and Android stores. The augmented reality game allows smartphone users to track and catch Pokémon.

It's been an eventful weekend for Pokémon trainers — even without Team Rocket around.

After being released Wednesday, the mobile app Pokémon Go is currently the top downloaded free app, and the top grossing app, in both the Apple and Android stores.

Pokemon Go: The Live Video Game Everyone Seems To Be Playing

Pokemon Go: The Live Video Game Everyone Seems To Be Playing

The augmented reality game allows smartphone users to track and catch Pokémon in real life, like a fantasy version of Google Maps. Developed by Niantic Labs, in conjunction with Nintendo and The Pokémon Co., Pokémon Go became an immediate hit.

Not only is the app closing in on Twitter for number of daily users, according to Similar Web, but it's now installed on more Android devices than Tinder (gotta catch 'em all?).

Nintendo — which owns part of Niantic — has seen its stock surge 36 percent in the two days of trading after the Pokémon Go release. According to Reuters, the app's popularity has added about $7.5 billion in value to Nintendo — welcome news for the company that's seen a decline in sales of Wii U and 3DS consoles and has had a touch-and-go relationship with mobile gaming.

Of course, the app is free (with optional in-app purchases) and doesn't directly belong to Nintendo, so it's unclear how exactly Pokémon Go will play for the company in the long term.

Nintendo having their best day since 1983 as #PokemonGo takes over the world#MoverOverMario pic.twitter.com/9XnHeumMSx

Will its popularity last? So far, the news cycle has been enamored with Pokémon-related stories, several of which have stirred up controversy.

In Wyoming, 19-year-old Shayla Wiggins was searching for Pokémon along the Wind River near her home when she spotted a dead body floating in the water — not exactly the creature she expected.

"It was pretty shocking," KTVQ quotes Wiggins as saying. "I didn't really know what to do at first. But I called 911 right away and they came really quickly."

In Missouri, four young men used the app to trap players at one PokéStop late at night, robbing them at gunpoint. Three of the suspects — in their late teens — are being charged with robbery in the first degree and armed criminal action, according to Gizmodo.

Multiple people have also reported sustaining injuries while playing the app (don't battle while driving, folks), and police around the world have begun giving safety tips to players in their areas.

The app is causing a ruckus in other ways, too.

The game has a geographic database of notable or interesting locations meant to be visited in person — PokéStops, where players can retrieve helpful items like potions, or gyms, where they can train their Pokémon.

One man, Boon Sheridan, says his Massachusetts home — a converted 19th century church — was erroneously flagged as one of the game's gyms, which aren't supposed to be on private property.

These cats figured it out, the bench in the park across the street is close enough to be ?in? the gym. pic.twitter.com/HAlVp84cd6

Sheridan told BuzzFeed News that a few dozen people have come by his house looking for the Pokémon gym. He says he's a player himself and has enjoyed meeting the visitors, but BuzzFeed reports that he is also raising concerns about the lack of options the app gives him to dispute or remove locations:

" 'I'd be cool with it if I could have some control over the hours,' he said. 'I'd rather them get it sorted out a little bit better.'

"Sheridan said he hopes to talk to the developers behind the game to ask if they could put some limits on when people can come to his home or maybe move the gym to the nearby park."

A similar battle for territory is taking place at Westboro Baptist Church in Kansas, which has also been labeled a gym in the game.

Opponents of the church's anti-gay stance took control over that gym with a Pokémon called Clefairy and named the space with a marriage equality slogan LOVEISLOVE. According to USA Today, the church responded in kind:

"The Westboro Baptist Church is fighting back, using one of the most commonly known Pokémon: Jigglypuff. ...

"The church has gotten a mix of responses on social media, from those expressing support and criticizing it. One person challenged the group to a Pokémon battle. ...

"It was unclear at press time whether a Pokémon battle has ensued between the Clefairy and Jigglypuff."

Unfortunately, some of the problems surrounding the game may be ones the developers can't fix.

In a popular Medium post titled "Pokémon GO is a Death Sentence if you are a Black Man," Omari Akil writes about how his experience playing the game became overshadowed by the news of the fatal police shootings of Alton Sterling and Philando Castile:

"I spent less than 20 minutes outside. Five of those minutes were spent enjoying the game. One of those minutes I spent trying to look as pleasant and nonthreatening as possible as I walked past a somewhat visibly disturbed white woman on her way to the bus stop. I spent the other 14 minutes being distracted from the game by thoughts of the countless Black Men who have had the police called on them because they looked 'suspicious' or wondering what a second amendment exercising individual might do if I walked past their window a 3rd or 4th time in search of a Jigglypuff."

Lucky for the developers, news about the game isn't all bleak. In fact, in most instances, the game so far is having its intended effect of bringing people outside and exploring their neighborhoods — together.

Over 1,000 people gathered this weekend in Perth, Australia, for a quickly organized Pokémon Go Walk, together searching for Pokémon and trading tips for about four hours. According to 7 News, even more Australians showed up for similar events in Sydney, Melbourne and other cities.

Chances are, there will be more such gatherings to come. And for those who were wondering: NPR's headquarters in Washington, D.C., is a PokéStop, too.

In an earlier version of this post, the Australian city of Sydney was misspelled Sidney.