Accessibility links
The Big Internet Brands Of The '90s — Where Are They Now? : All Tech Considered Verizon's purchase of Yahoo will close the book on one of the oldest Internet companies. What happened to the other famous '90s brands, like GeoCities, Netscape and CompuServe? A nerdy remembrance.

This got us thinking: What happened to all those other big brands that dominated the early Internet experience? Here's a nerdy remembrance of a few of them. (A TL;DR preview: Yahoo and AOL bought a bunch of them, though many survived far longer than you might think.) 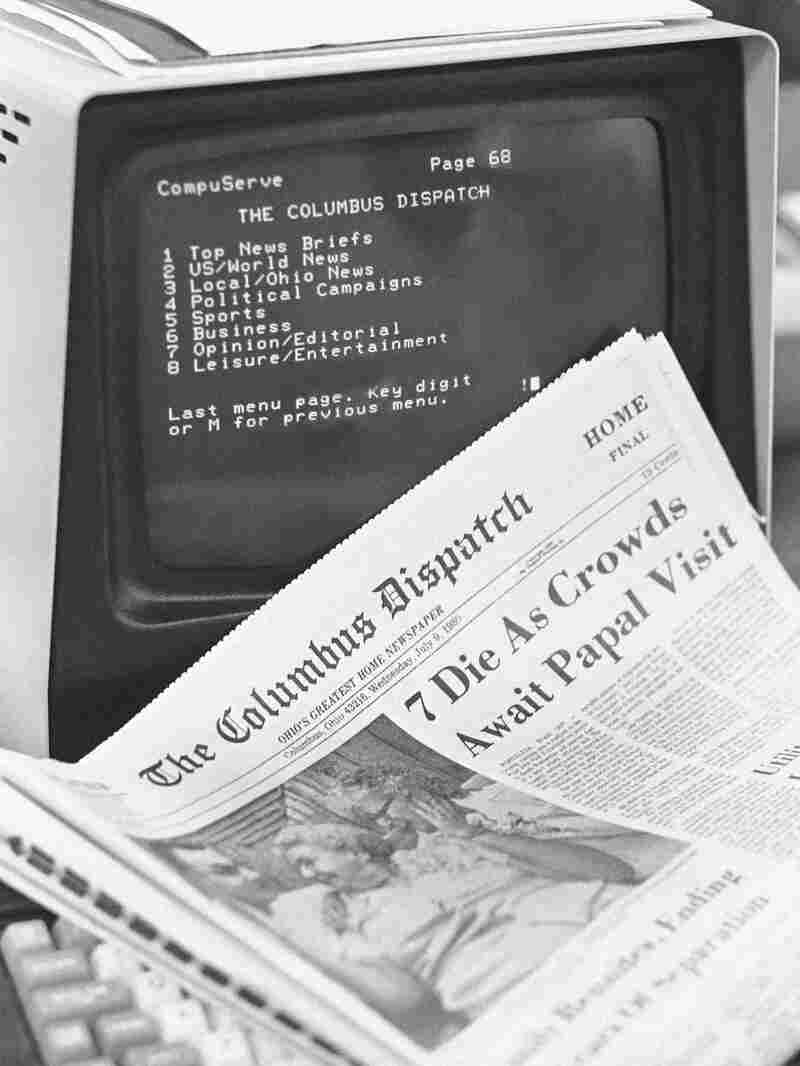 A CompuServe system shows an index of stories by the Columbus Dispatch and Associated Press on July 9, 1980. AP hide caption 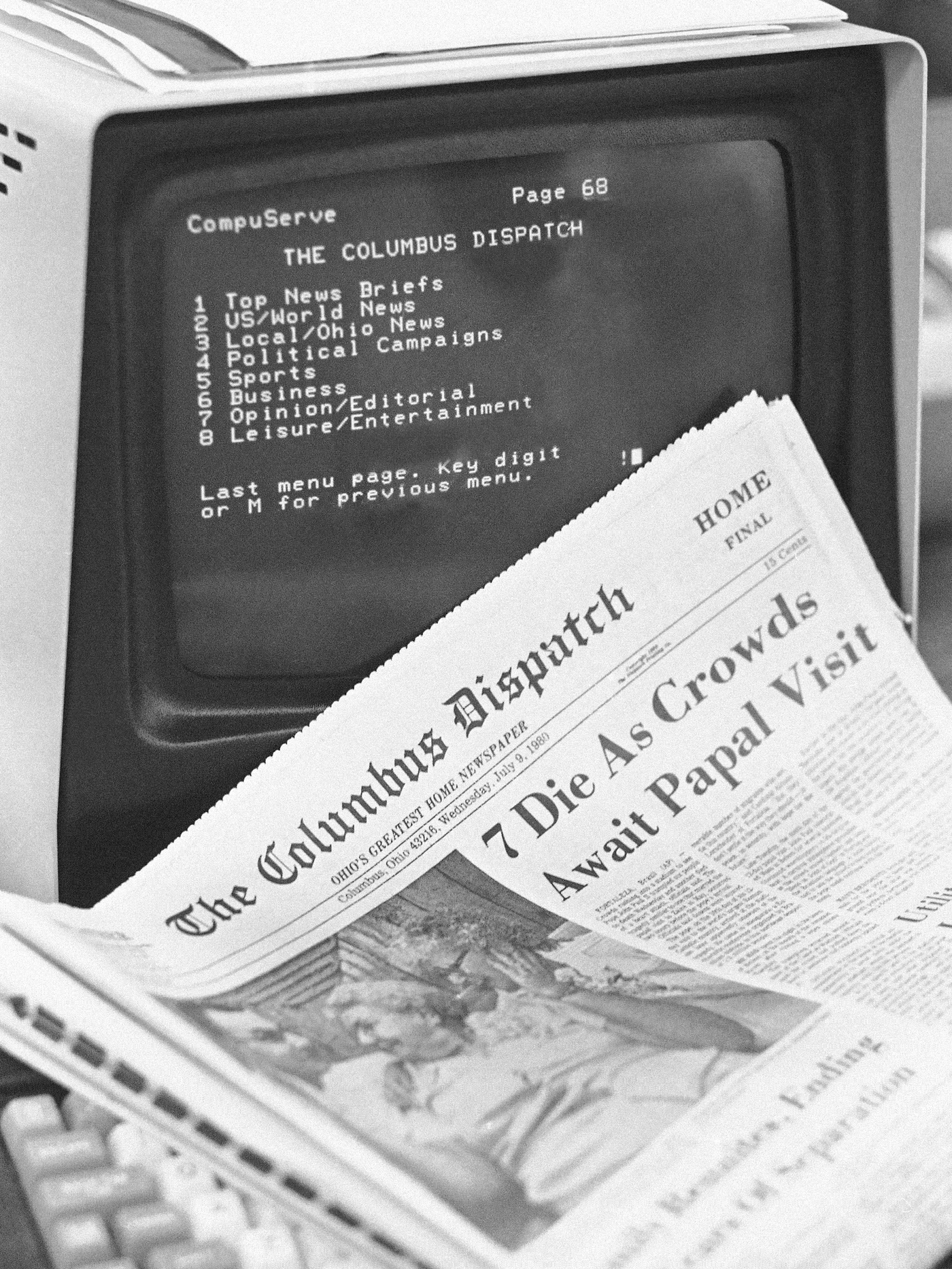 A CompuServe system shows an index of stories by the Columbus Dispatch and Associated Press on July 9, 1980.

CompuServe launched for consumers as a dial-up online information service in 1979, and its popularity skyrocketed in the 1980s and 1990s. It was the original online portal, with news, chats, file sharing — a first such experience for several generations of users.

H&R Block (yep, that tax-prep company) bought CompuServe in 1980 and in 1997 sold it to WorldCom, which in turn passed on the subscriber base to the growing rival AOL. After itself going through a merger and then a spin-off with Time Warner, AOL officially shut down CompuServe in 2009.

A younger competitor to CompuServe, Prodigy was a "home computer information service" launched nationally in 1990 by a partnership of Sears and IBM, distinguishing itself with the addition of graphics and advertising support. The service lost money and users in the early '90s and went through a reboot in 1993, according to Wired.

Prodigy Classic officially shut down in 1999, citing the "Y2K problem," and the Atlantic has a great long read on what went wrong. The company re-imagined itself as an Internet provider and got fully acquired by SBC communications, now known as AT&T. 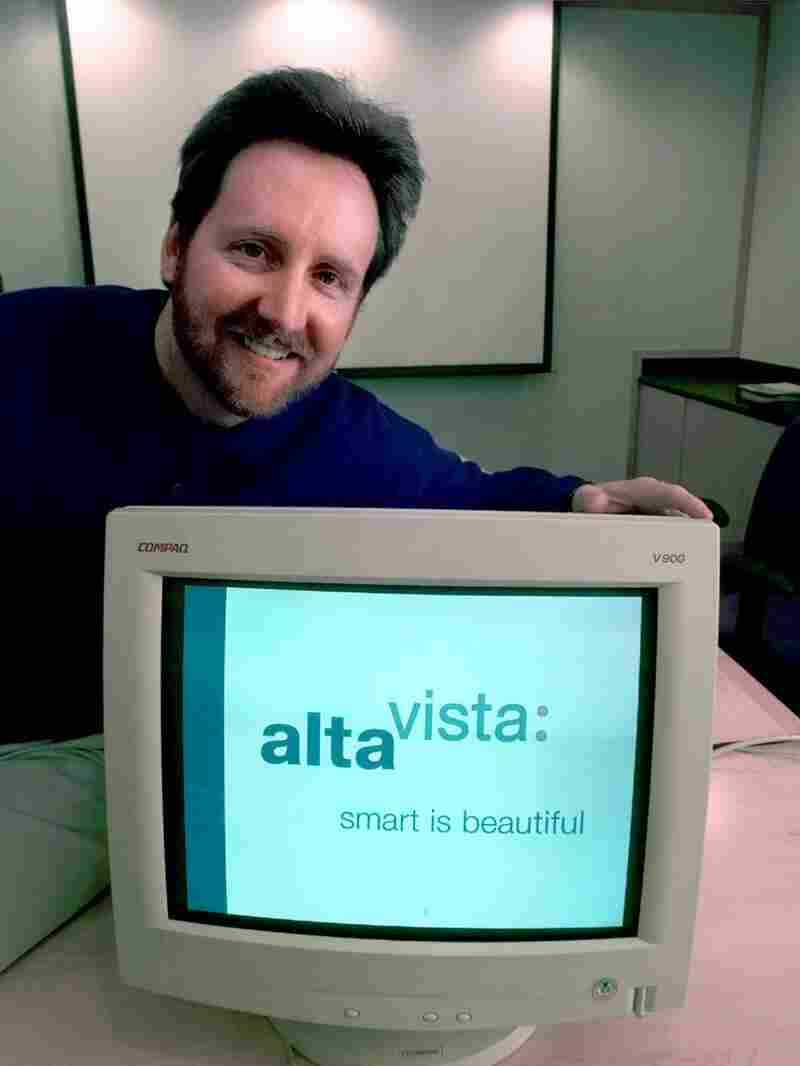 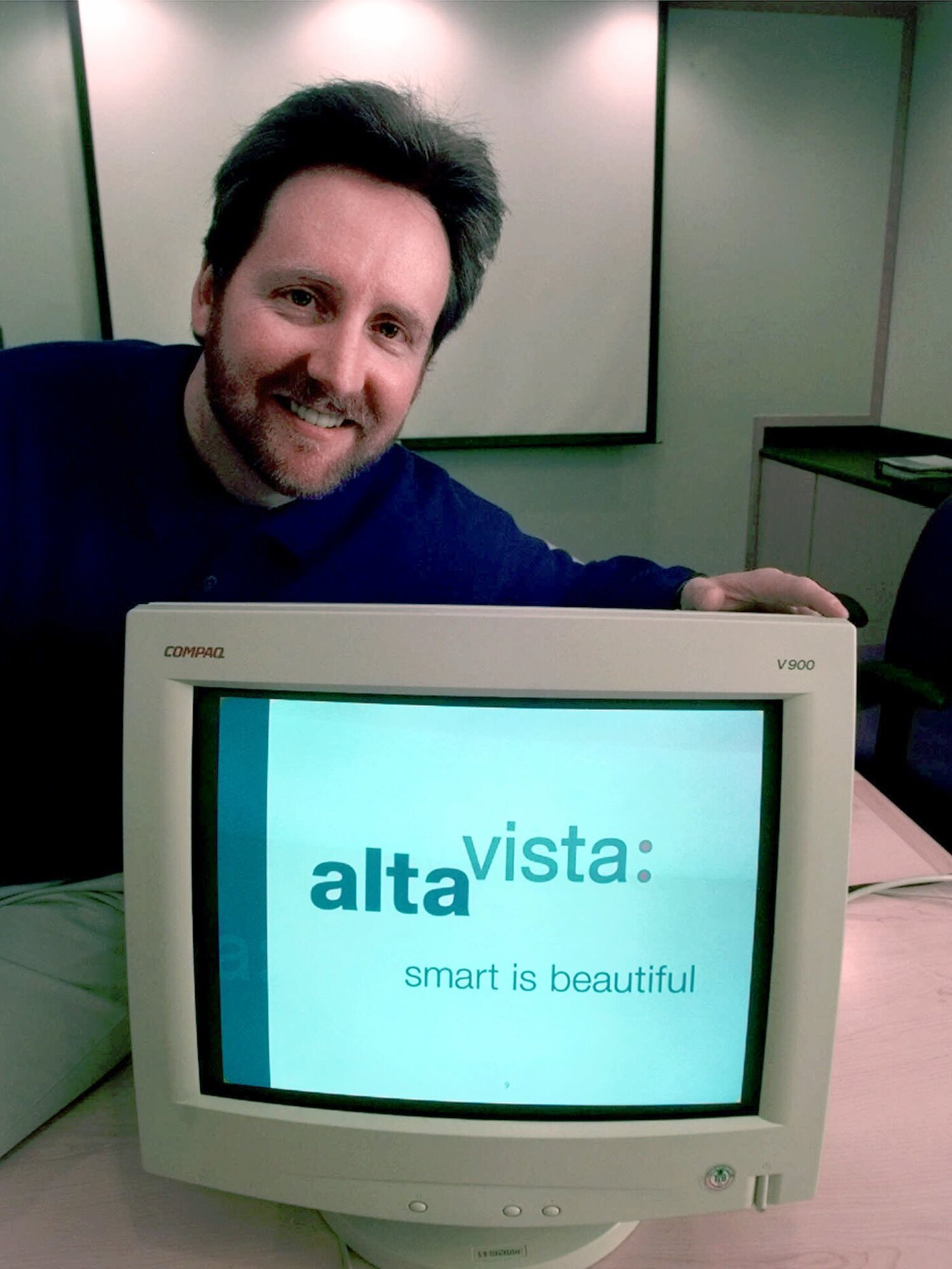 Launched in 1995 by Digital Equipment Corporation as a demo project, AltaVista — aka a web "super spider" — was essentially an indexing predecessor of Google.

It changed hands a few times: Compaq Computer bought it in 1998 (for $3.3 million), one-time Internet giant CMGI bought it in 1999 (for $2.3 billion), ad company Overture Services bought it in 2003 (for $140 million) and it was acquired by Yahoo later the same year. Yahoo officially shut down AltaVista in 2013.

This was like the original Facebook — or, um, MySpace? You could find a community and build your own neon-colored, spinning-animation, multi-fonted, totally cool personal web page! After its mid-'90s launch, Yahoo bought GeoCities for more than $3.5 billion during the dot-com boom in 1999, ran it as Yahoo! Geocities and eventually shut it down in 2009.

But if you're nostalgic, you could still Geocities-ize websites, thanks to the Internet. 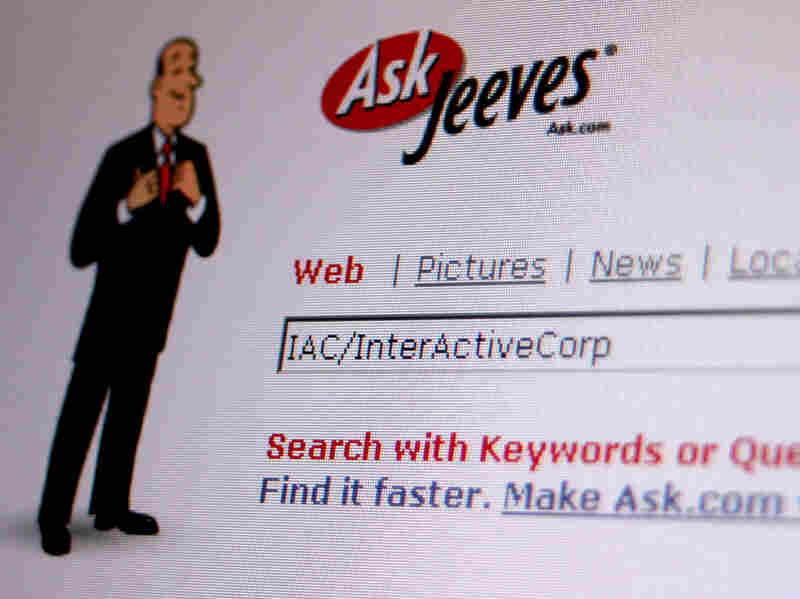 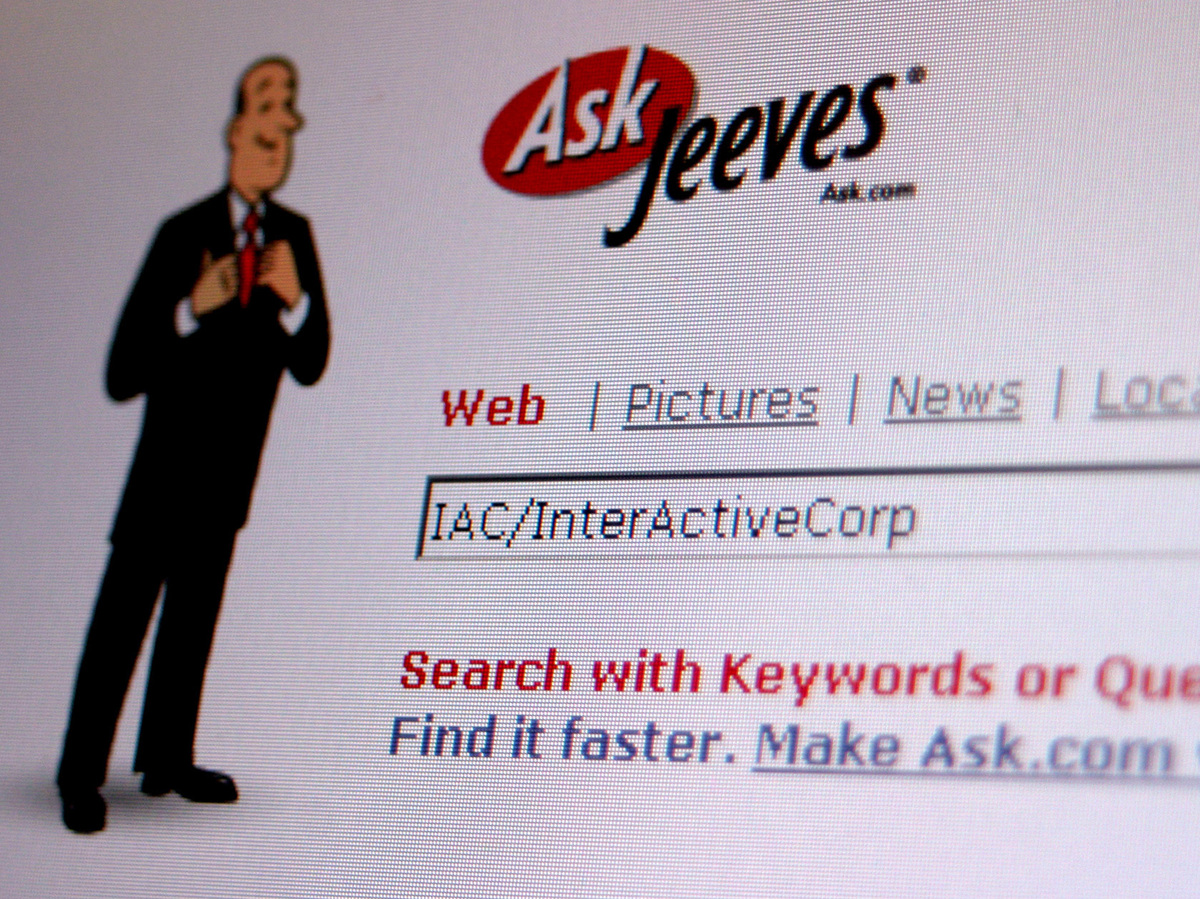 Jeeves came and went as the friendly online butler, eventually retired by Ask.com.

Remember that web butler Jeeves who answered your web queries in a distant echo of today's Siri?

Launched in 1996, Jeeves didn't live up to Google's search engine ascent: Bought in 2005 by IAC (whose businesses include OkCupid, Tinder, The Daily Beast, CollegeHumor and Vimeo), it went through several relaunches, abandoning the search engine and emerging as Ask.com.

The website host/builder is still around! Launched in 1996, it was bought a year later by another dot-com startup WhoWhere, which in turn was bought in 1998 by Lycos, described by CNN at the time as "the world's fourth most popular Web site, behind America Online, Yahoo and Microsoft." Lycos, after trading hands many times, currently belongs to Indian digital media company Ybrant Digital. 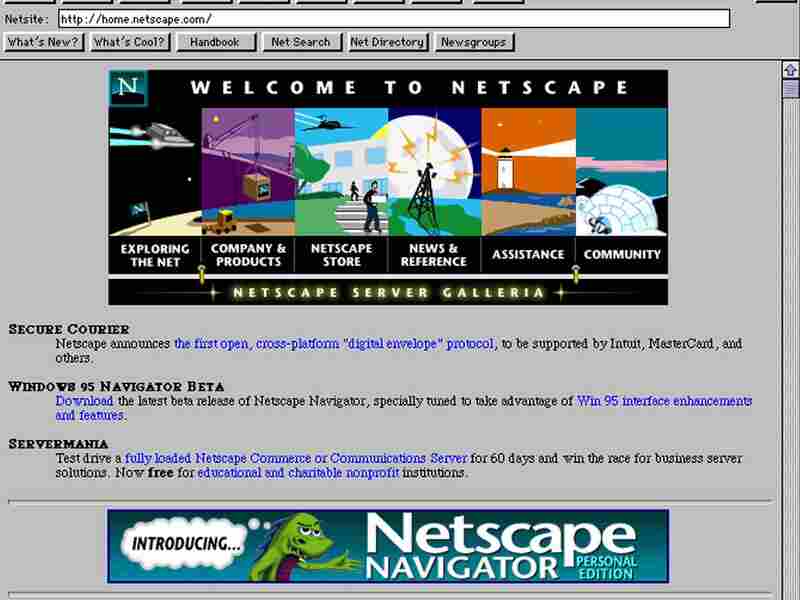 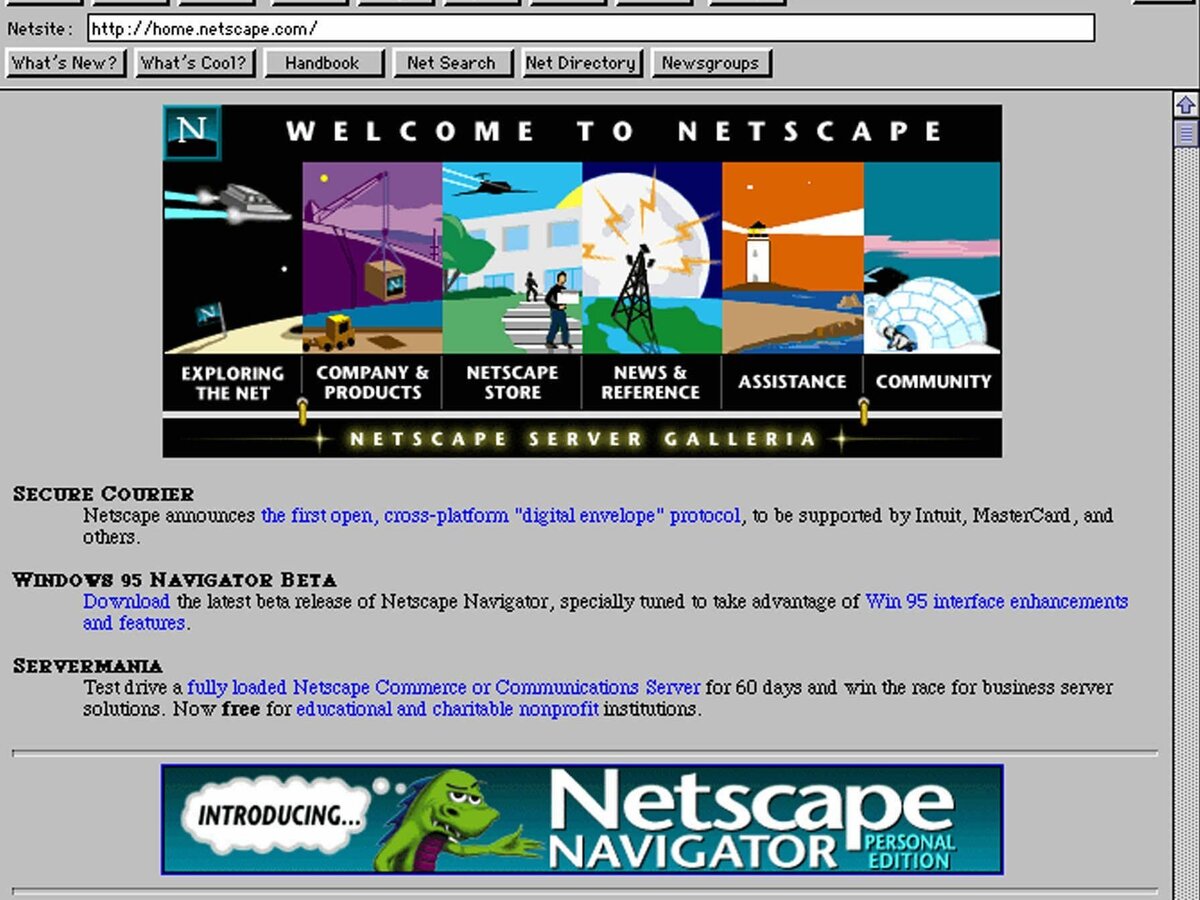 The original caption of this photo read: "The Netscape Navigator home page on the Internet's World Wide Web is seen Wednesday, Aug. 9, 1995."

A brainchild of now-legendary Marc Andreessen and Jim Clark of Silicon Graphics, the Netscape browser beat Microsoft to the market in 1994. After intense "browser wars," detailed by Engadget, Netscape's release of the source code spurred the creation of Mozilla.

AOL bought Netscape for the dot-com-bubble price of $4.2 billion in 1998, though it ended up costing $10 billion. As Firefox gained prominence, AOL made several attempts to revive Netscape's popularity, but eventually stopped supporting it in 2008.

You've got a message!

Launched in 1996 by Israeli company Mirabilis, the "I seek you" chat service was an alternative to AIM and Yahoo Messenger (both of which are still around, and the latter is apparently beloved by oil traders).

AOL bought Mirabilis in 1998 for $287 million and sold ICQ in 2010 to Russian investment firm Digital Sky Technologies for $188 million.

Bonus '90s Brands That Are Still Around

A previous version of this post called CompuServe the original portal to the Web. In fact, while CompuServe launched for consumers as an online information service in 1979, it was not at that time a portal to the World Wide Web.