Listen · 3:51 3:51
Drones That Launch Flaming Balls Are Being Tested To Help Fight Wildfires 3:51 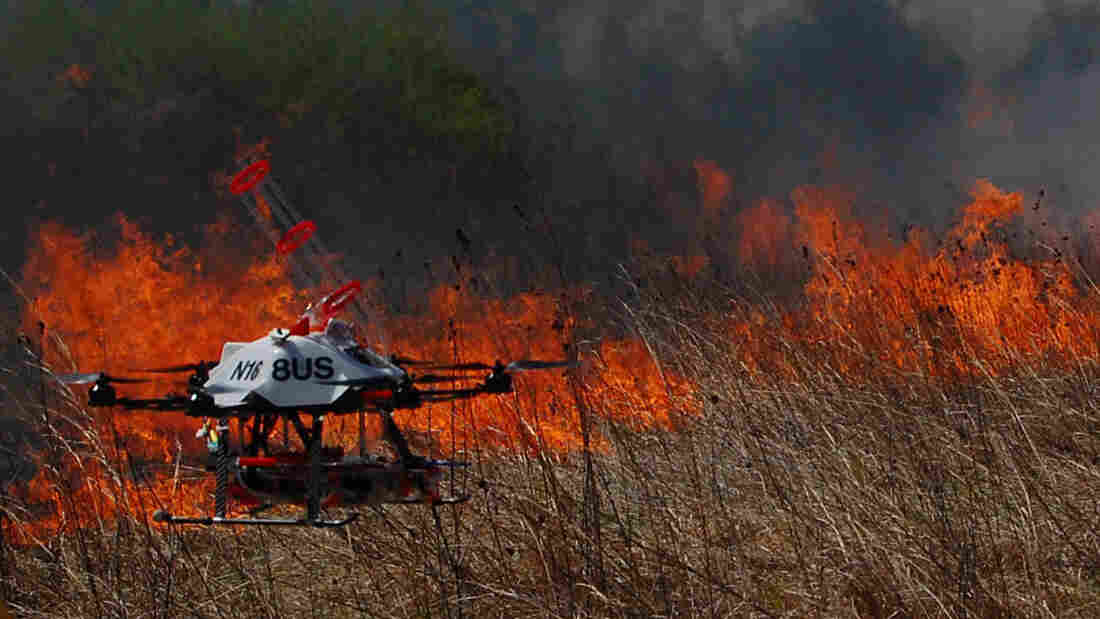 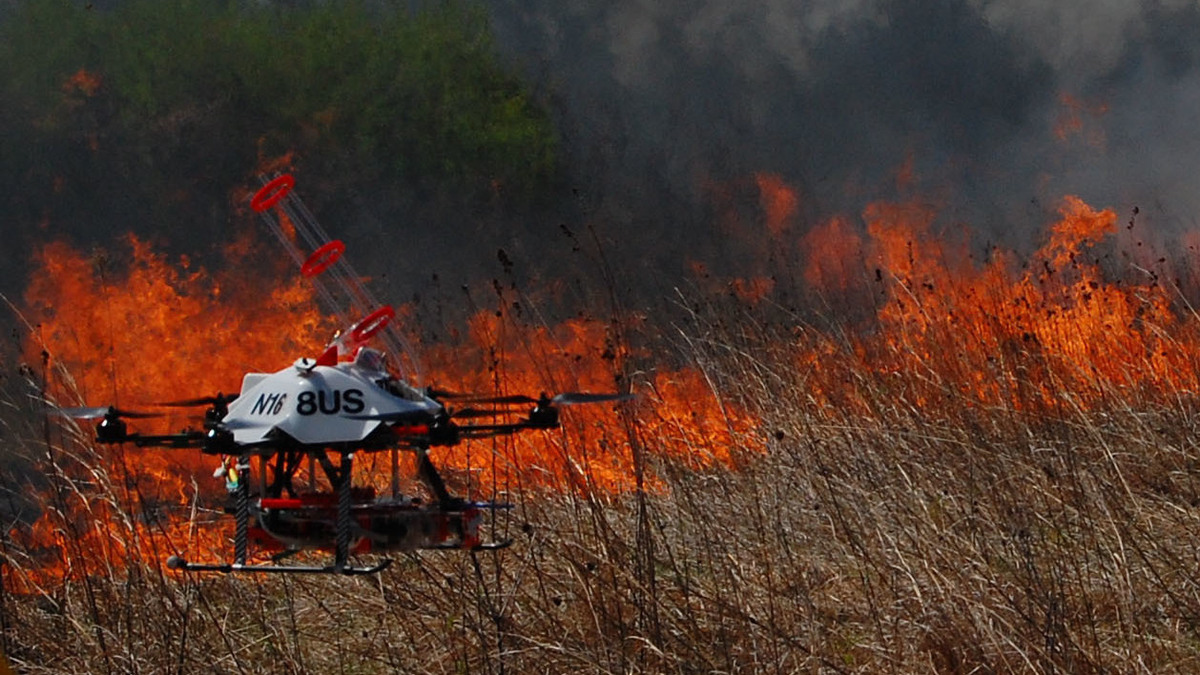 It's a warm, sunny morning at the Homestead National Monument of America in southeastern Nebraska. A burn crew dressed in yellow and green flame-resistant clothing is about to set a patch of tall-grass prairie on fire — on purpose.

These kind of burns aren't unusual. But today's burn is; a team from the University of Nebraska is testing a fire-starting drone.

Small drones have become a favorite high-tech tool, or toy, for all kinds of people. But researchers hope this new firefighting drone they are designing can save lives.

U.S. Announces New 'Ground Rules' For Use Of Commercial Drones

"Once they build this horseshoe shape of black area, then we're going to have our drones fly across this field and drop some of these balls that will ignite into a flame," Elbaum explains.

The drone is about the size of a kid's helmet, with horizontal propellers on all sides. A clear tube extends from the top, into which Elbaum is loading pink and white ping pong balls. Then, standing on the side of the field, the team sends the drone up and over the flames, into the unburned area.

Once it's airborne, the team directs the drone to inject the balls with glycol just before dropping them one by one to the ground. The glycol mixes with a powder, igniting into flames and burning the grass.

In The Heat Of The Moment, Drones Are Getting In The Way Of Firefighters

Casey McCoy with the Nebraska Forest Service says even small, controlled fires like this one can quickly turn deadly.

"We've had a fairly challenging track record here in Nebraska," McCoy says. "In the last five to six years we've had a number of fatalities associated with prescribed fires."

The danger of aerial firefighting

Federal land agencies fight massive wildfires every year, using fire as a tool to keep active wildfires from spreading. Often, they light those fires from the air, dropping those same ping pong balls from helicopters.

Brad Koeckeritz, head of the unmanned aircraft systems division at the U.S. Department of Interior, says those flights can be risky.

"The nature of the mission is very dangerous because the helicopter's very low speed, very close to the ground, and if anything goes wrong there's very limited options for the pilot to put the aircraft down safely," he says.

In fact, 41 wildland firefighters died in airplane or helicopter crashes in the last decade. Koeckeritz says aerial firefighting is both dangerous and expensive.

Federal agencies are already using drones for video, mapping and reconnaissance. But Koeckeritz says employing them like this could eventually be a cheaper way to start fires and keep firefighters safer.

As the smoke clears from the now-charred prairie, Sebastian Elbaum surveys the site and says his team will use what they learned to make this technology even better. There are questions about how the drone might work under certain circumstances, or the skills needed to fly it.

Elbaum says they eventually want it to become just another piece of the firefighting toolkit.

"Today the firefighters have, you know, maybe a shovel, gloves, their helmets," he says. "But you can imagine them having this on their backpack, pulling it out when they get to the field, and telling the vehicle, 'Hey, go scout out there. Check whether it's hot, check whether it's safe. Start an ignition over there.' "

A high-tech drone like that would not only be able to help control fires, but could also save lives.