Accessibility links
Why Taylor Swift Is Asking Congress To Update Copyright Laws : All Tech Considered It's an ongoing standoff between musicians and Google's YouTube: Who should be responsible for removing unauthorized copies of songs posted online? 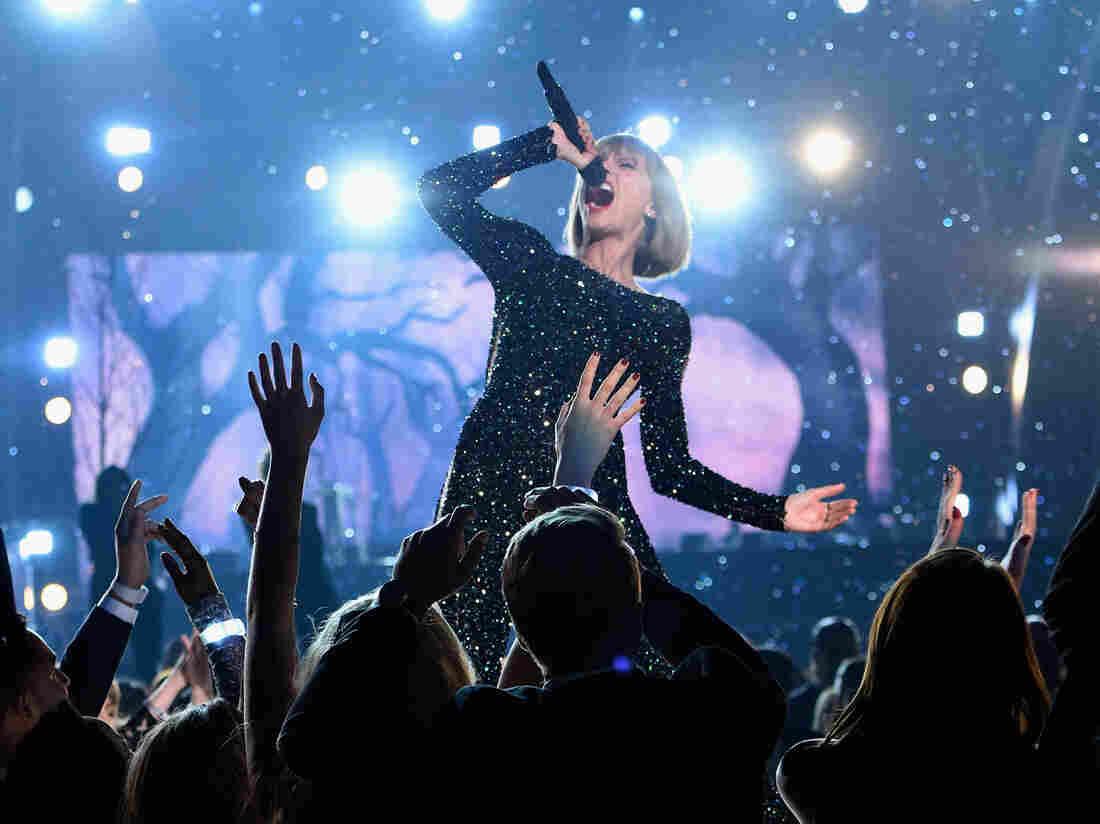 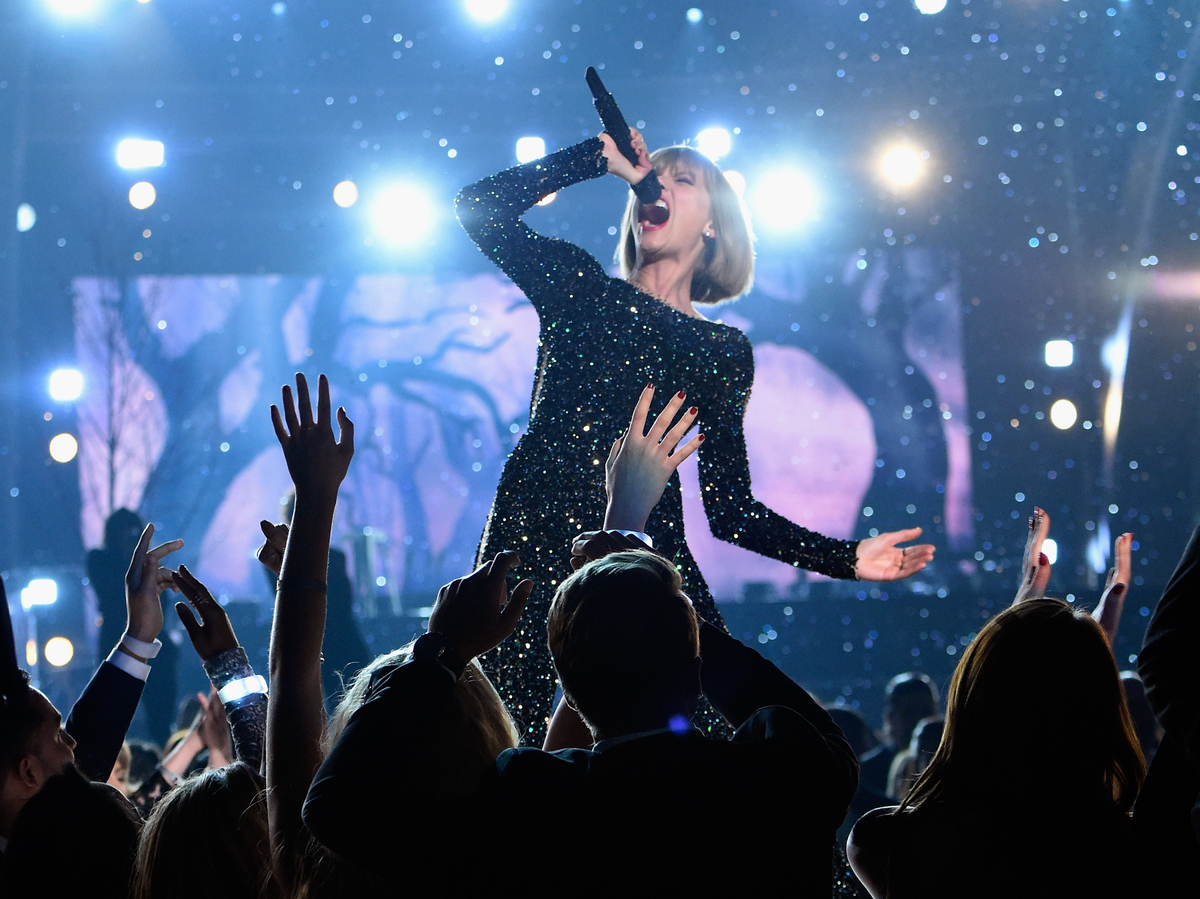 Taylor Swift is one of many artists urging Congress to update copyright laws, which they argue don't fairly pay for music available online.

Congress is in the midst of a review of the copyright laws to make sure they're up to date. Some of the recording industry's biggest stars, among them Taylor Swift, Katy Perry and Paul McCartney, recently signed a letter urging lawmakers to make reforms.

The artists say that aspects of the law that were written in the late 1990s make it too easy for tech companies to ignore rampant piracy on their sites and put too much responsibility on the artists themselves to find the illegal music files.

It may be hard to feel sorry for high-profile artists like Taylor Swift — but you might feel bad for Sam Rosenthal, who runs a small independent label, Projekt Records. He's been making a living as a musician and producer of electronic music for 30 years. Over the past decade, he says he's struggled to keep his business alive.

Like a lot of people in the music business, Rosenthal puts the blame on rampant online piracy. He points to one of the electronic musicians that he produces, Steve Roach.

"He's pretty much lived his life to create art. He is really dedicated to it," Rosenthal says. "He puts a lot of time into his work and also money into the studio to have the best possible album."

And that used to pay. Rosenthal says Roach's albums regularly sold 50,000 to 60,000 copies. But that was before the days of massive file sharing on the Internet. Now, a quick search on Google will take you to sites where you can download copies of Roach's music for free.

And here's where Rosenthal gets angry about copyright law: Google is not responsible for taking down links to the pirated song unless Roach or his label let Google know it's there. Rosenthal says it's tough to play Internet detective for all the artists on his label, especially when every time one illegal link gets taken down another one pops up.

"It's a really unreasonable expectation," he says, "that I would have the time to chase people all day when I should be running a business and making music."

The problem, he says, is the "safe harbor" provision of the Digital Millennium Copyright Act. It was written when Congress was revising the copyright laws in 1998 to account for the growing presence of the Internet and protects Internet services from financial liability if people use them to post unauthorized copyrighted material.

'Designed for a different age'

"It was a system designed for a different age," admits Jim Burger, a copyright attorney who represented tech companies at the time. "It's like traffic rules for carriages with horses, and you have autonomous cars now."

When the law was being written, Google had just been founded and YouTube didn't exist. "The concern that Congress clearly had in mind was it did not want to throttle or chill innovation and expansion of the Internet," Burger says. "And they didn't want the overhang of copyright lawsuits."

Twitter Takes Down Unoriginal Jokes, But All Of Yours Are Probably Safe

Of course, now Google is one of the most valuable companies in the world. That is why Rosenthal and many other artists think Google and other Internet giants should be made legally responsible for finding unauthorized files and taking them down.

"Google could solve this problem — 90 percent of this problem — with one switch," Rosenthal says. "And if they were really on the side of the creators they would do something about that."

Actually, representatives of Google's YouTube say the video service does do something. Artists can register their songs with Google's Content ID, which locates uploads of their music and lets artists run ads over those videos. "Ninety-five percent of the time they're choosing to monetize it, which means they share the revenue," says Katherine Oyama, legal counsel at YouTube.

Since YouTube launched Content ID a decade ago, the program has paid $2 billion to rights holders — but that includes other copyright owners such as filmmakers as well as musicians.

Plus, Content ID tracking doesn't work for Google search, which artists say continues to bring up links to sites that list pirated versions of their songs.

There could be a generational difference in the way artists approach the Internet to make a living.

A cappella singer Peter Hollens, whose YouTube videos have been viewed tens of millions of times, thinks the Internet opened the door for him to reach fans and turn it into a living. "The fact that I can do it as a dorky dad," says the 34-year-old. "I truly believe that anyone with the gumption and the drive can make this happen."

Hollens thinks people who've been in the business for a long time just need to learn how to get their music in all the right places and bring in different streams of income.

"To make a living as a musician most people know ... you need to have your hand in every cookie jar possible," he says. That includes Spotify, SoundCloud, commercials, video games and just about anywhere that music can be found.

In fact, Hollens credits the safe harbor provision itself with his success. He fears that if Congress made Internet companies responsible for finding and taking down unauthorized music files, they would begin to err heavily on the side of caution and censor musicians out of fear that their music might violate the copyright laws and the company would be responsible for millions of dollars in fines. Under U.S. copyright law, violators can be fined up to $150,000 for each work infringed.

It may be that it's just too hard for older musicians to learn the new business. But Rosenthal and others say that it should still be up to them to control where the music they've worked so hard to create shows up. Rosenthal doesn't think he and other artists should have to bear all the responsibility for finding every place on the Internet where their music is put up against their will.

Congress will likely hear from musicians like Hollens and Steve Roach and his producer Sam Rosenthal as it continues its review of the copyright laws. Lawmakers are expected to unveil an outline for reforms in the fall.